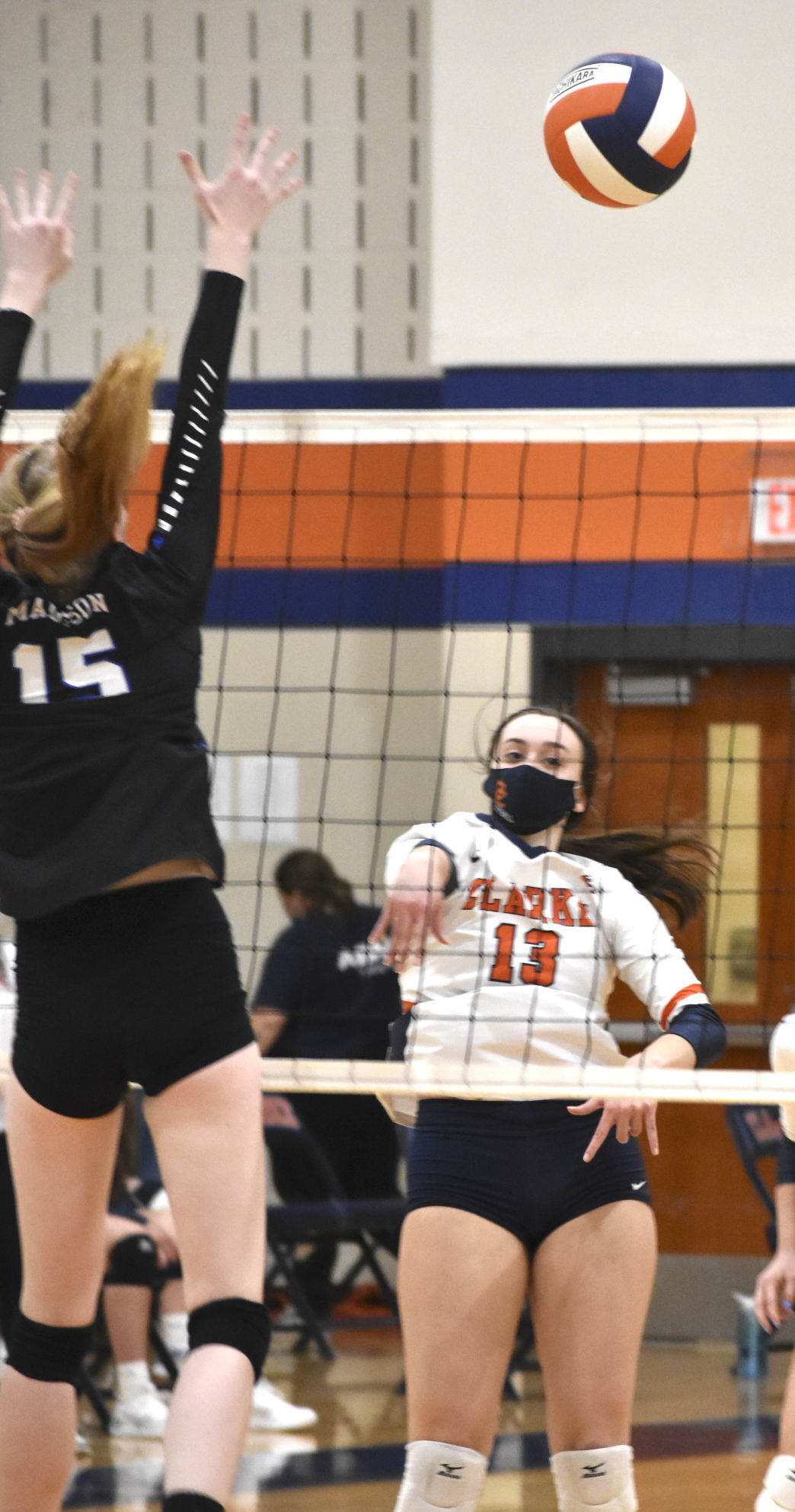 Clarke County junior middle hitter Bella Stem had a match-high 16 kills to help the Eagles to a 3-0 win over Madison County on Thursday night in Berryville. The Eagles clinched a share of their first Bull Run District regular-season title since 2012 with Thursday’s win. 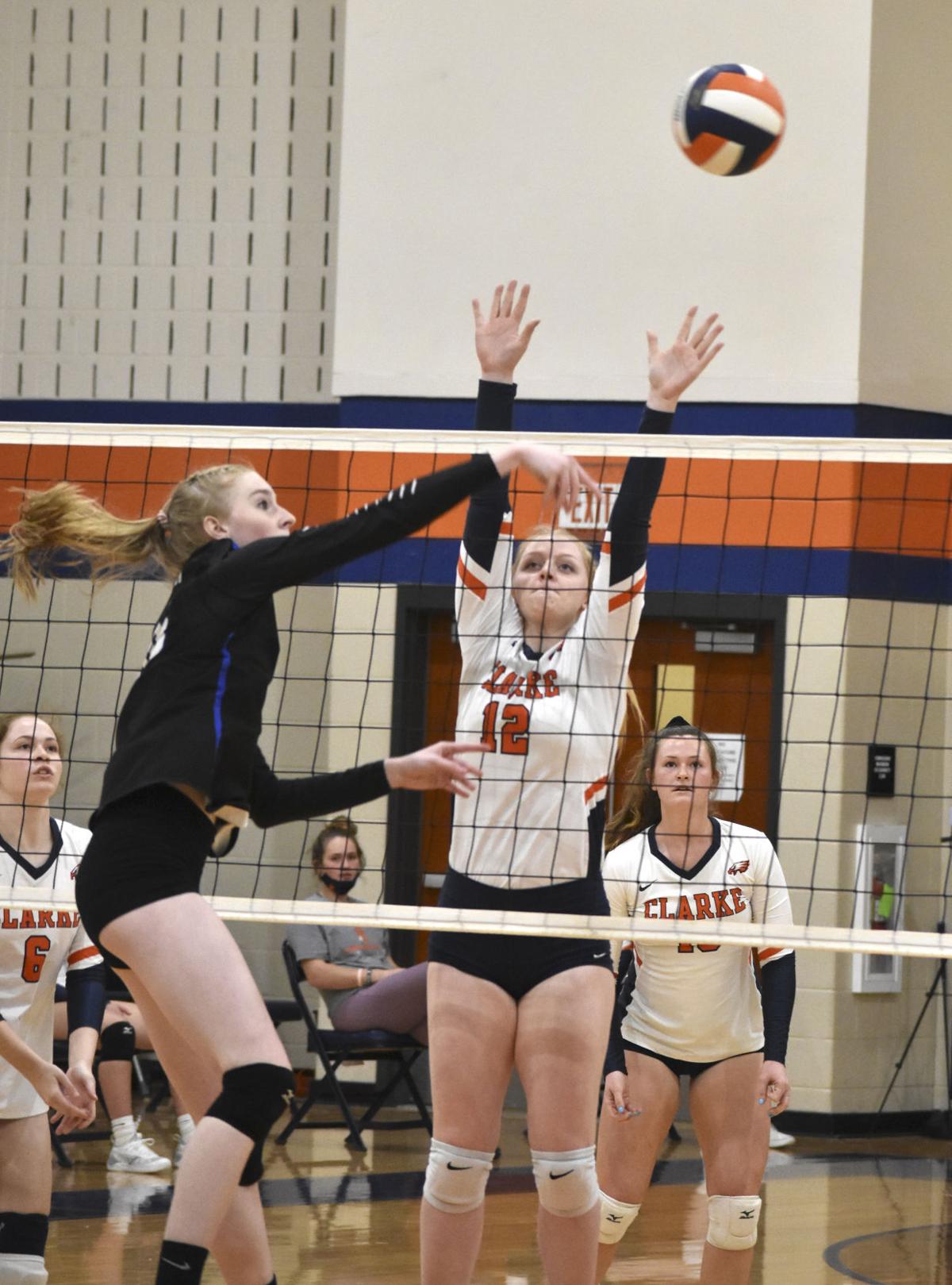 Clarke County junior middle hitter Bella Stem had a match-high 16 kills to help the Eagles to a 3-0 win over Madison County on Thursday night in Berryville. The Eagles clinched a share of their first Bull Run District regular-season title since 2012 with Thursday’s win.

BERRYVILLE — The Clarke County volleyball team wasn’t 100 percent healthy on Thursday night, but the Eagles have every reason to feel 100 percent confident in themselves heading into the Region 2B tournament.

Clarke County snapped a two-match losing streak by sweeping Madison County 3-0 (25-21, 25-14, 25-21) in its regular-season finale and earned a share of the Bull Run District regular-season title in the process.

Both the Eagles — who ended the Mountaineers’ five-match winning streak on Thursday — and Luray finished with 9-3 marks this year and split their two matches with each other. With the exception of East Rockingham, all Bull Run schools played an exclusive Bull Run schedule this year.

East Rockingham (7-5) — which did not play district matches — will be the No. 3 seed for the Region 2B tournament and travel to No. 2 Clarke County for a 7 p.m. semifinal match on Tuesday.

“It’s crazy,” said senior setter Alyssa Hoggatt, who was a member of an Eagles team that went 10-13 overall and 5-9 in the Bull Run last year. “We have a ton of talent on this team, but I don’t think anyone really expected [a district title], which makes it feel a lot better.”

For much of the year Clarke County was in the driver’s seat to win the district title, but little went right in the last two matches.

On March 30, the Eagles lost their first match to the Mountaineers (7-5) in four sets. Then on Tuesday, Clarke County was defeated in three sets by Luray. In their last five combined sets against Madison County and the Bulldogs, Clarke County failed to score more than 18 points in any set.

A big reason for that was injuries. Eagles first-year head coach Skylar Layton found out shortly before the first match against the Mountaineers that senior right side Mackenzie Cather wouldn’t be able to play due to an injury, forcing Clarke County to change its lineup at the last minute. She’s now missed the team’s last three matches.

And on Tuesday, senior Belle Reid, one of the team’s defensive specialists, suffered an injury against Luray and did not play on Thursday.

Layton pulled up freshman outside hitter Anna Spencer from the JV team for Tuesday’s match, in which she played one set to get acclimated to the team. Thursday, she played the whole match. And junior outside hitter Kacie Turner shifted to the back row to help the Eagles’ defense.

Hoggatt (37 assists, three aces) and junior middle hitter Bella Stem (match-high 16 kills, two blocks) each gave a lot of credit to that duo for rising to the occasion on Thursday. Spencer was second to Stem in kills with nine and was part of a strong overall attack in which senior outside hitter Sara Murray and junior middle hitter Abby Peace recorded six kills each.

“Tonight, we just clicked,” said Layton, who was impressed with how Spencer meshed with the team.

The only time Clarke County trailed in any set was when Madison County won the first point of the night. The Eagles ran off seven straight points in response, an example of their hunger to show that the previous two matches were not an accurate reflection of the type of team they are.

“We had to get everything together,” Stem said. “We had a hard practice [Wednesday], which allowed us to come in here pretty strong.”

Madison County settled down in the first set and tied it at 14, but after a timeout Clarke County regained control with four straight points capped by an ace from Hoggatt. With the score 23-21, the Eagles closed out the set at 25-21 with kills from Stem and Murray.

The Eagles dominated the second set, recording 15 kills and only two attack errors.

A block by Stem to make it 8-5 provided a spark, as the Eagles scored five consecutive points and went on a 15-5 run overall as their family members in the stands roared. Hoggatt assisted Stem for the last two Eagle points of the 25-14 set. On set point, Hoggatt provided a back set to the right that Stem smacked down for a kill after Hoggatt received a pass from Charlotte Maiberger.

The Eagles then proceeded to jump all over the Mountaineers in the third set. Clarke County’s fans applauded enthusiastically as the Eagles made four outstanding defensive plays on three hard-hit Madison County shots to keep a point alive that ended with yet another Stem kill that made it 13-5.

After a Madison County serve into the net, the Eagles took a 21-10 lead. But the Mountaineers answered with an 11-2 run in which Stem made several errors on the attack to make it 23-21.

But Clarke County came up big when it mattered. The left-handed Hoggatt smacked the ball over the net for a kill in a scramble to make it 24-21, then she set up Stem for a blast down the middle that Madison County barely touched before the ball hit the floor.

Stem wasn’t surprised she had some issues late in the third set, because the shoulder pain she’s been dealing with since March 22 started to get to her.

“I’ve been icing it and trying to do my best for the team,” Stem said.

The team leader in kills (166) certainly did that Thursday.

“I think she hit a lot more tonight than she has the past few games, and it really showed,” Layton said.

Layton couldn’t have asked for more from Stem or the rest of the Eagles against the Mountaineers.

“Tonight the girls were pretty on point with their hitting,” Layton said. “Even when the timing wasn’t good, they were just trying to get the ball over the net. I noticed that Madison wasn’t as good at doing out-of-sequence hits, and I think us hitting more than them tonight is really the reason why we won.”

Sarah Bevins (nine kills) was the only Mountaineer with more than four kills against a Clarke County defense that features sophomore libero Natalia Rodriguez (15 digs).

“We did a lot of practicing coverage [Wednesday] to prepare [for Thursday],” Layton said. “We knew what Madison had, we knew that they did a quick shoot in the middle and that their other middle liked to tip a lot, so we practiced that a lot [Wednesday] night. We hit coverage spots, so our passing was really good.”

Now Clarke County will move on to the Region 2B tournament.

“The past two games have been rough on the girls, and they were ready for a comeback,” Layton said. “I think their confidence is going to be high going into Tuesday’s game.”