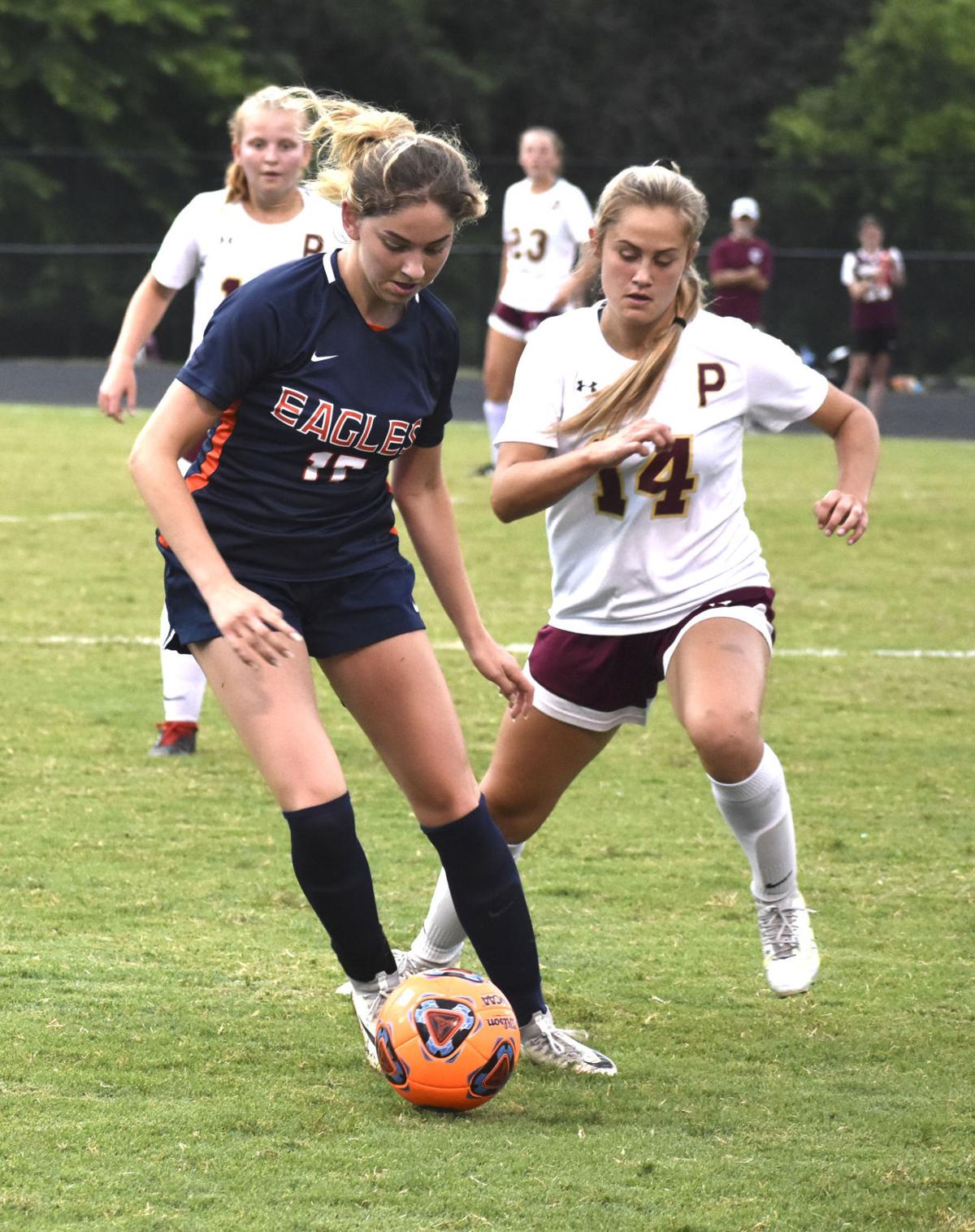 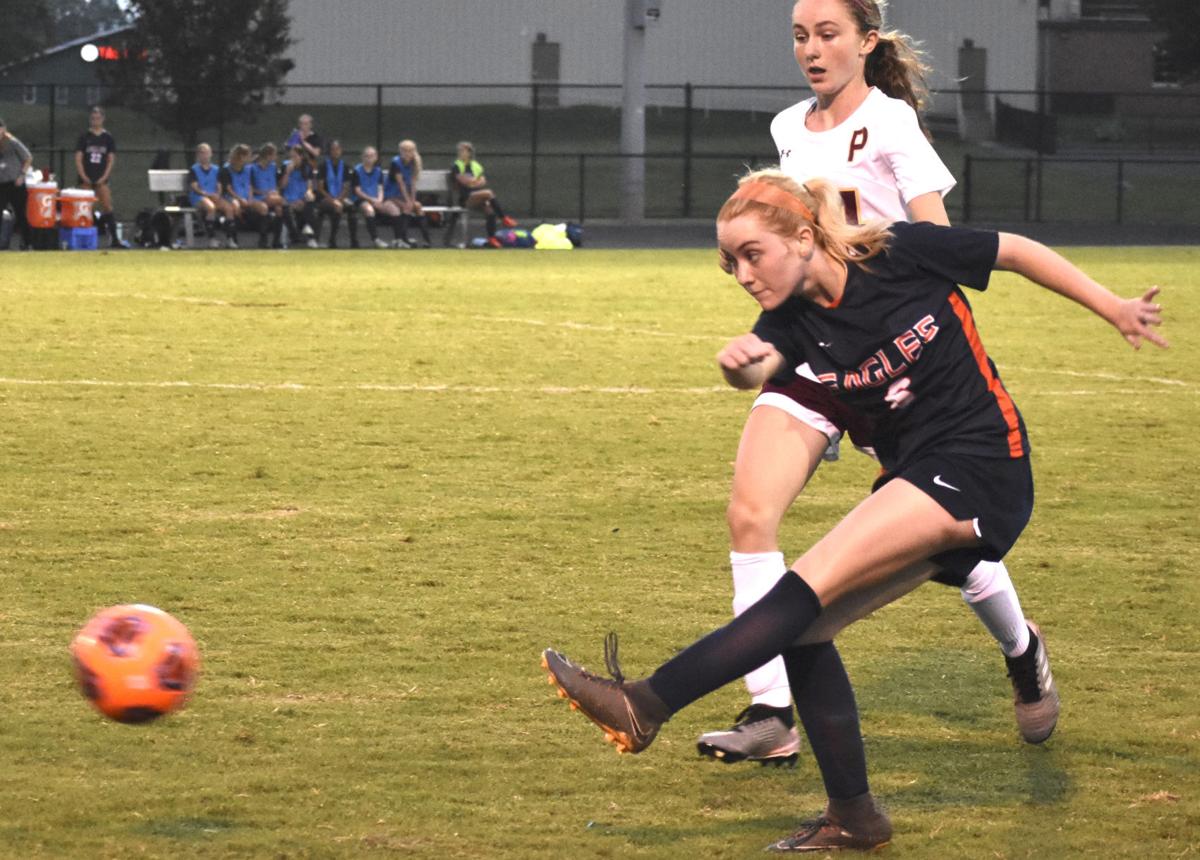 BERRYVILLE — The Clarke County girls’ soccer team had done an excellent job of picking up its level of play in the second half in the three games prior to Monday night’s contest, but Eagles coach Jon Cousins wasn’t at all certain about how his team would react to Monday’s 100-minute weather delay at halftime.

He got his answer pretty quickly.

Eagles senior midfielder Sophia Deem scored 20 seconds after halftime and Clarke County went on to a thorough 4-0 win over Poquoson in the Class 2 state semifinals at Feltner Stadium. Deem scored two of the Eagles three goals after the break, with freshman defender/midfielder Summer Toone adding the other goal seven minutes into a half that featured light rain off and on.

The girls’ game — which started close to 8 p.m. because of a 50-minute lightning and rain delay at the start of the boys’ contest that preceded it — ended at 11:12 p.m.

Clarke County improved to 12-0 and will now host Region 2C champion Radford (10-3) at 5:30 p.m. on Wednesday in the Class 2 final. The Bobcats beat Virginia High 1-0 in Monday’s other semifinal.

The Eagles will be in their first title game since 2011 and will try to win their first state championship since 2006, when they beat Radford in the middle contest of their Group A title game trilogy. Clarke County won in 2005 and 2006 and the Bobcats won in 2007.

Unlike in Thursday’s comeback 4-3 Region 2B championship game against Stonewall Jackson, the Eagles were never in danger against Poquoson (7-6). Clarke County finished with a 26-4 shot advantage, with 17 of those shots saved in a brilliant performance by Islanders goalkeeper Sydney McCarty. The only truly dangerous scoring opportunity the Eagles gave up came on a 20-yard shot that went high with the score 3-0 with 15 minutes left.

Still, Clarke County led just 1-0 at halftime on a goal by Toone’s twin sister Madison. Following a long goal kick by Eagles freshman defender Lillian Suling, Madison Toone, the Region 2B Player of the Year, won possession of the ball from an Islander defender on the Poquoson side of the field, dribbled in and scored in the 27th minute. Otherwise, the Islanders limited Toone in the first half by putting two or three defenders around her.

“I was a little concerned because of the delay, but I kind of barked at them,” Cousins said. “I told them you’ve got to finish it, just get it over with. I thought the team was better in the second half.”

“I think we just talked about how we couldn’t just let up, because we knew they were going to come out ready with it only being 1-0,” Clarke County senior defender Alison Sipe said. “One-to-nothing, anything can happen.”

Deem said the Eagles’ passes were crisper, their communication was better, and they hustled a lot more. Deem scoring so quickly helped with that.

Cousins usually plays Deem on the left side of the field because it’s easier for her to play the ball in with her strong left foot from there, but he moved her to the right side to start the second half because he felt Deem’s speed would be an advantage against the Islanders’ left back. Deem’s booming left foot was still able to come into play on her goal, and she fired a shot inside the far left post from about 25 yards out.

“I guess I just hit it right,” said Deem with a laugh, who closed the scoring with another well-hit shot off a cross into the middle from the right side by sophomore Ella O’Donnell.

After Deem’s first goal, the Eagles’ defense continued to shut down Poquoson, which scored 21 goals in its three regional tournament wins.

“I thought we just communicated well and expected their through balls,” Sipe said. “They pressed hard and had fast girls, and I feel like we just did a good job of identifying who those fast girls were and knowing where that through ball was going. We anticipated the pass.”

“Bailey is athletic, she’s tenacious, she’s tough,” Cousins said. “I was really proud of the way she played, And that’s the best game I’ve seen Sophia play since I’ve been here. She played the game of her life.”

Brown starts at left back but usually shares time with Summer Toone. With the way Brown was playing, Cousins said he had no intention of doing that on Monday. And not by not playing Summer Toone on defense, that aided the Eagles’ attack on Monday.

Summer Toone played a strong game as an outside midfielder, which was highlighted by her goal from a shot inside 15 yards following a nice lead pass from junior midfielder Maya Marasco.

“We’ve never gotten to do this, and it’s our senior year,” said Deem, who will look to add another state title to her collection after an individual gold medal through swimming when she she was a freshman. “We’re so excited.”

Tickets for Wednesday’s game can only be purchased at gofan.co/app/events/324989?schoolId=VHSL.