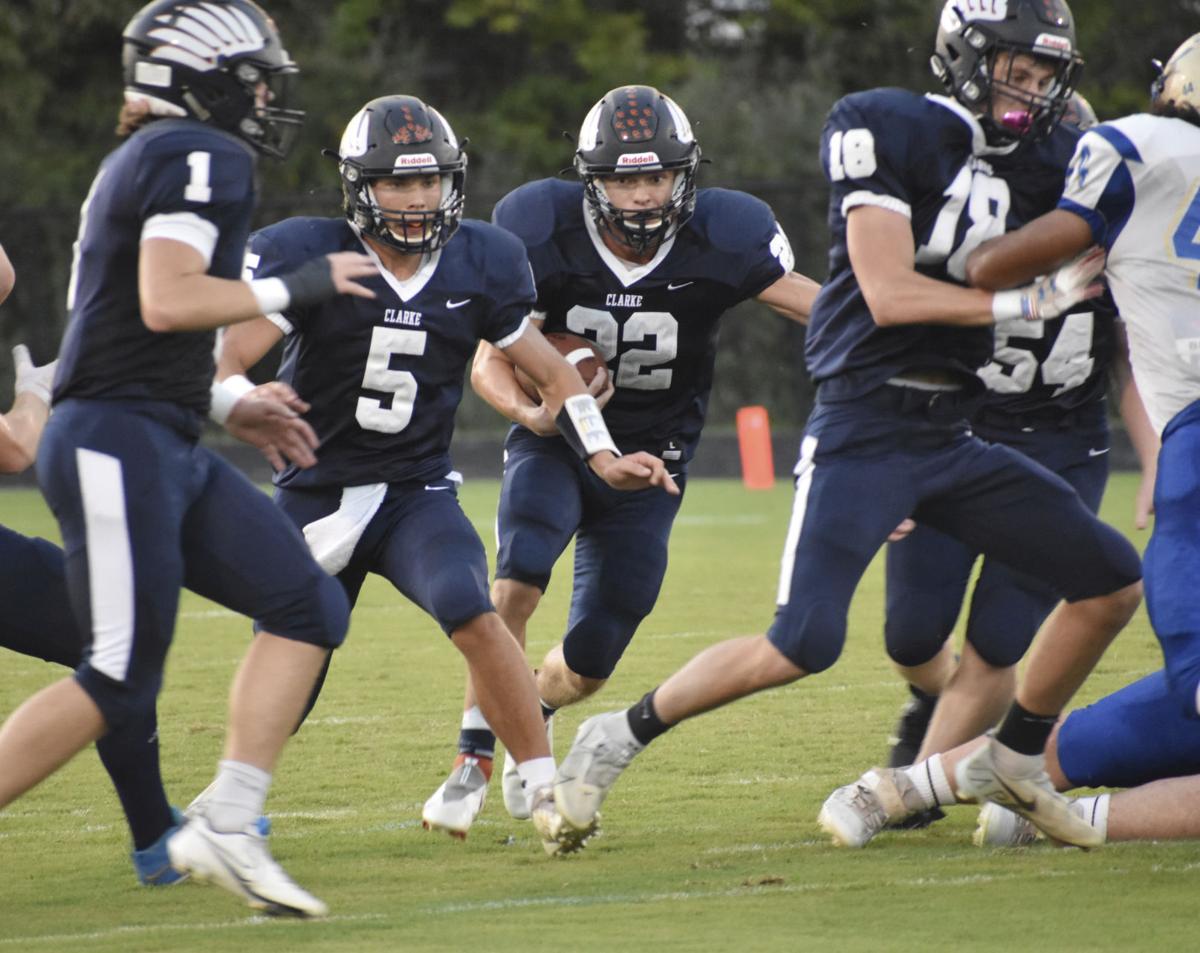 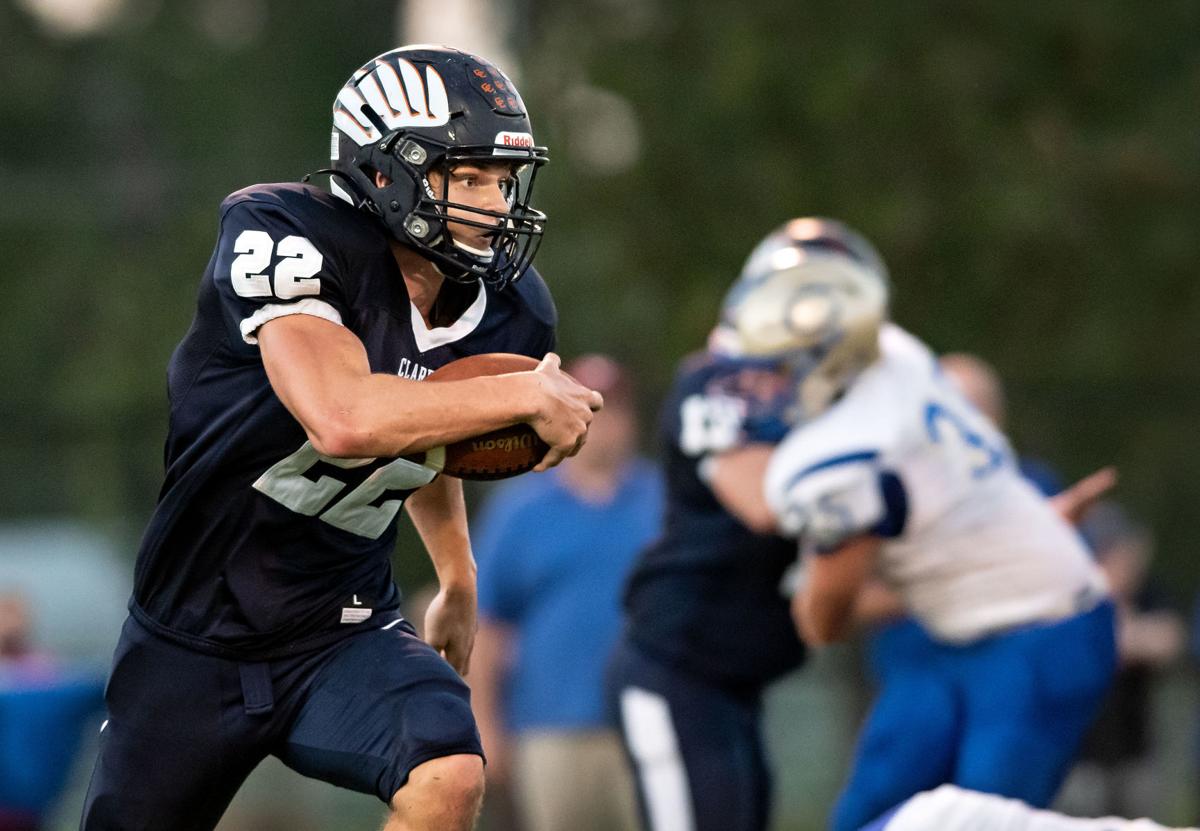 Clarke County’s Kyler Darlington runs to the outside for yardage in Friday’s 13-7 win over Central. Darlington had 187 yards and two touchdowns rushing.

Clarke County’s Kyler Darlington runs to the outside for yardage in Friday’s 13-7 win over Central. Darlington had 187 yards and two touchdowns rushing.

BERRYVILLE — One of the benefits of Clarke County’s single-wing offense is the unpredictability of it. With four players in the backfield, you never know who is going to get the ball when it’s snapped.

But a big reason why the Eagles have churned out more than 200 rushing yards per game every year since they instituted the single wing in 2008 is the regular presence of a reliable, strong, explosive tailback who can take on the bulk of the carries.

After a four-game spring season in which Clarke County spread the wealth in the backfield, Friday night confirmed that the Eagles definitely have that player this year in Kyler Darlington.

In the spring, Clarke County had six players with between 17 and 31 carries and 164 and 231 yards. Coach Casey Childs said the Eagles were hoping that someone would emerge as a featured tailback, and over the past year Darlington has put in plenty of work to make the Eagles want to put the ball in his hands on a consistent basis.

He’s done that while also ranking second on the team in tackles (16) as a weakside “Will” linebacker. Darlington had seven tackles against Central and had a 20-yard interception return for a TD against Manassas Park in Week 2.

“Unbelievable work ethic,” said Childs of Darlington, who was brought up to the varsity for the final few games of the 2019 season and received his first significant playing experience in the spring. “That was shown all winter and leading into spring season. And to the time the spring season ended until now, when we say the weight room is going to be open late and anybody who wants to stay can stay, he stays. You have to run him out of there. Just a tremendous kid.”

Darlington (23 carries, 184 yards, 8.0 ypc, four TDs in the spring) said he knew he couldn’t take anything for granted in the offseason if he wanted to make a bigger impact this fall. The Eagles’ 36-14 loss against Luray — when Clarke County was outgained 370-192 — showed Darlington how physical and difficult it can be at the varsity level.

Darlington said he spent five or six days a week in the weight room during the summer. Darlington didn’t put many pounds on his body, but the amount of weight lifted increased dramatically. His bench press increased from 205 pounds to 235. His top squat is 325 pounds and his maximum dead lift is 375.

“Sophomore year, it was running back by committee,” Darlington said. “I knew I could take over, so I started committing myself a lot. It’s worked out, I’m doing good, and I hope I can just keep on playing how I am.”

Childs said Darlington had an outstanding performance in the scrimmage against Jefferson (W.Va.) that showed the coaches he could stand out in the backfield. His increased strength is evident on every game night.

“You see it running through tackles,” Childs said. “In the Warren County game [to start the season], it was tough sledding at first, because Warren County has a lot of size as well. But he just starts to grind on you a little bit and wear on you. Those runs that are three, four yards, he starts getting eight or nine in the second half, and then he’ll bust a big one.

“He has strength and quickness, and his feet never stop on contact, which is great as a running back. He’s come a long way and he’s doing an awesome job.”

Darlington said he doesn’t try to juke around defenders, but he is pretty dangerous when he’s in space. Darlington had 14 carries for 141 yards and two touchdowns against Warren County, scoring from 60 yards out in the second quarter and recording a 31-yard TD in the third quarter.

“Scoring touchdowns, man. That’s awesome,” said Darlington when asked what he likes most about running back. “It’s just awesome to hear the crowd cheer for you.”

Darlington’s favorite game was the one against Central because of how important it was for the team, and he was glad he could do what he could to contribute.

“I loved [getting the bulk of the carries against Central],” Darlington said. “I feel like if I just keep working hard, I can be that guy for the next two years.”

Darlington has to work hard so he has the energy to contribute on offense and defense, a two-way role Clarke needs.

For example, Peyton Rutherford (Clarke County class of 2020, now at James Madison University) didn’t have to play much defense when he was in high school because the Eagles were deep at linebacker. That isn’t the case now.

High-volume rushers and tacklers are nothing new at Clarke County. Former William & Mary linebacker Josh Dulaney is someone who thrived in those areas, recording a team-high 140 tackles while also rushing for an area-best 1,620 yards and 24 touchdowns as a senior for the Eagles in 2013.

“It’s not easy,” Darlington said. “Sometimes, I get winded. I just have to push through it.

Darlington played as a reserve linebacker in the spring, and he feels the main thing he’s gotten better at is reading offensive guards, which helps him see where plays go.

“He’s got a quick first read and can play sideline to sideline, which for that Will linebacker is important because he’s got to able to play coverage as well for us,” Childs said. “He’s able to pick backs up out of the backfield. He did that against Man Park when he had the pick six [on the screen pass]. All that contributes to being a really good football player.”

Whatever Darlington can do to help the Eagles win, he’ll do it.

“He just wants to compete,” Childs said. “If we’re doing conditioning things, he wants to be first. He wants to be at the top.”