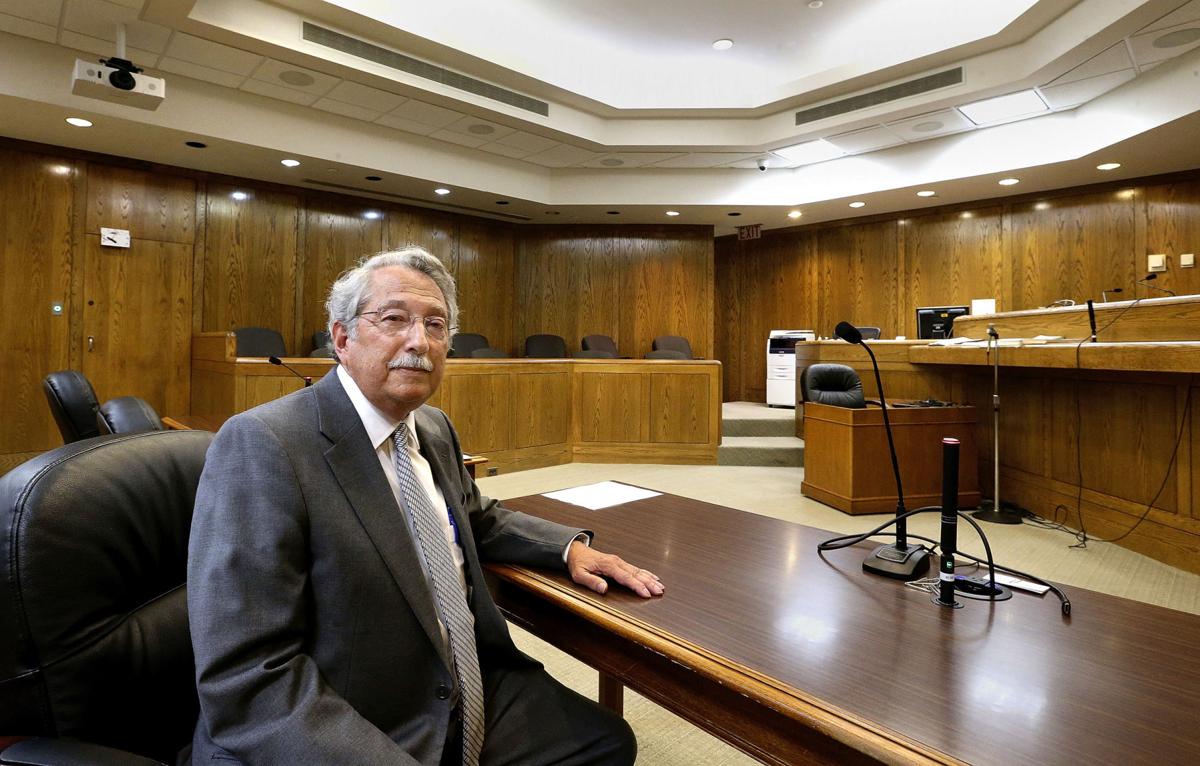 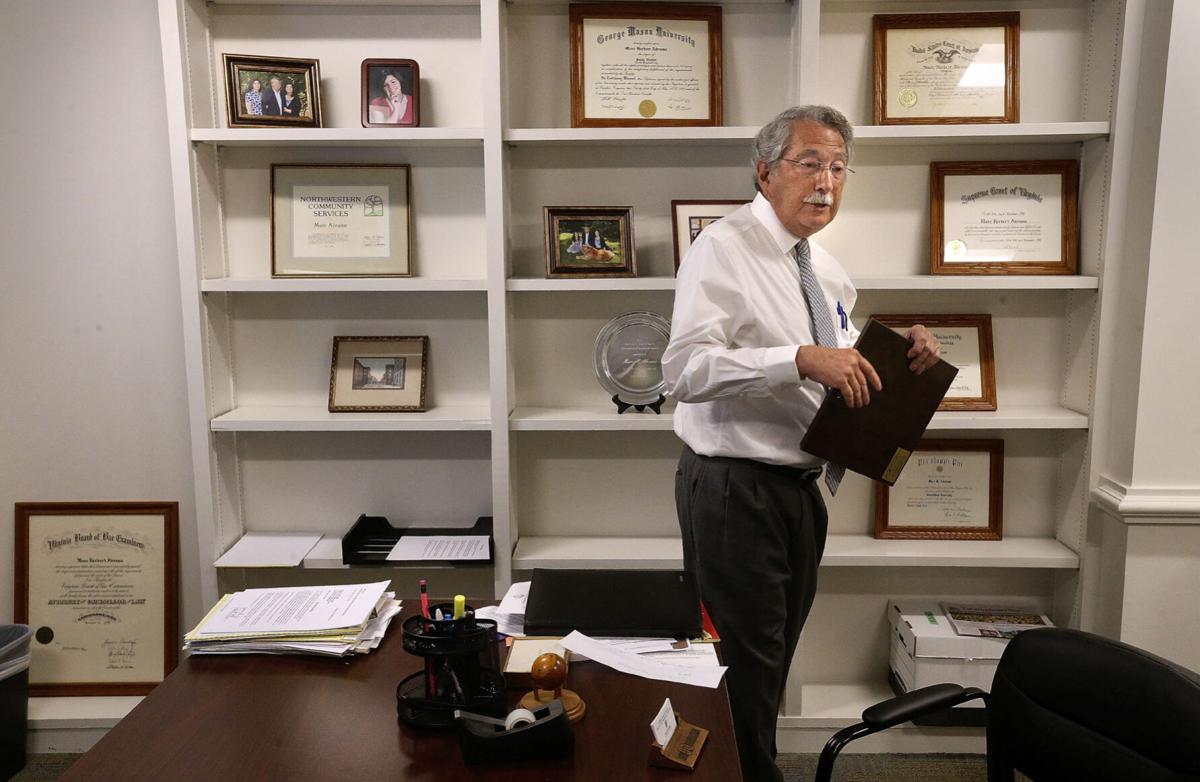 Virginia Commonwealth’s Attorney Marc Abrams retired Friday. He is shown in his office Wednesday in the Creamery Building in downtown Winchester. 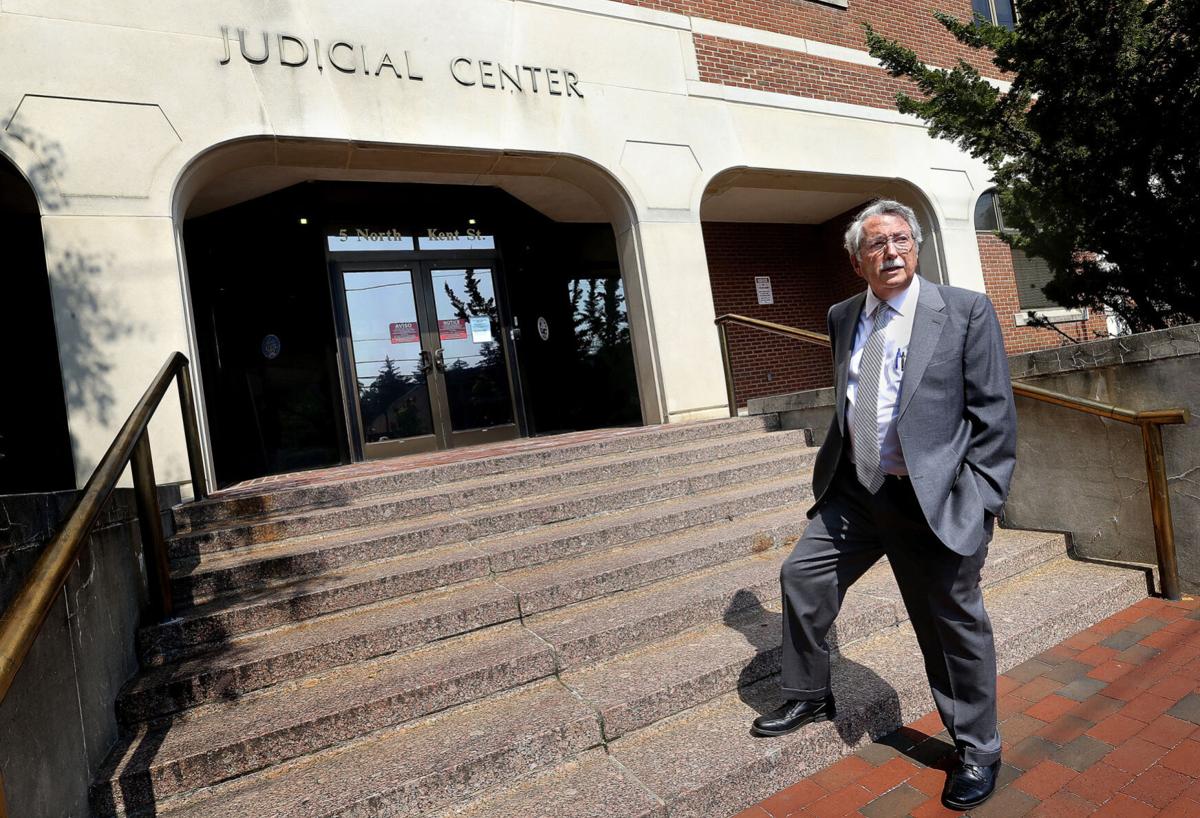 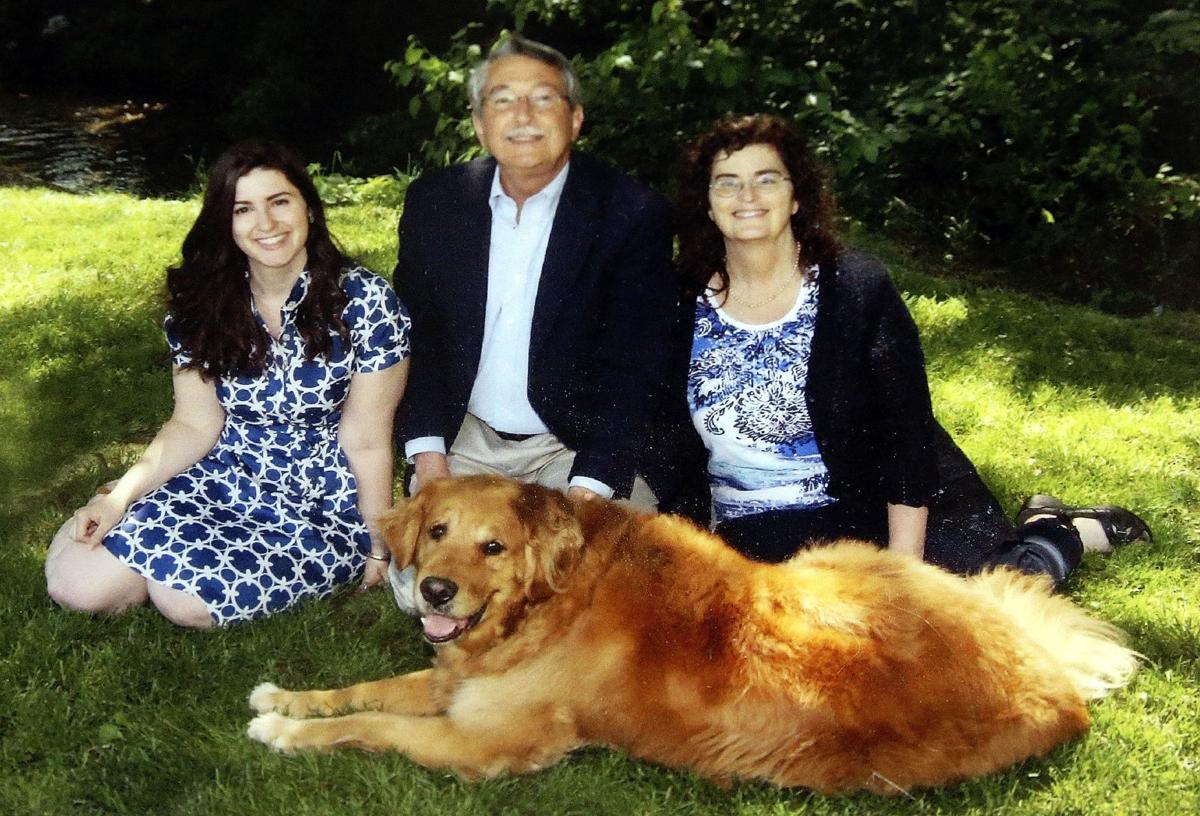 In a recent family photo, Winchester Commonwealth’s Attorney Marc Abrams is shown with his wife, Mena, and their daughter, Shoshana, and their golden retriever. 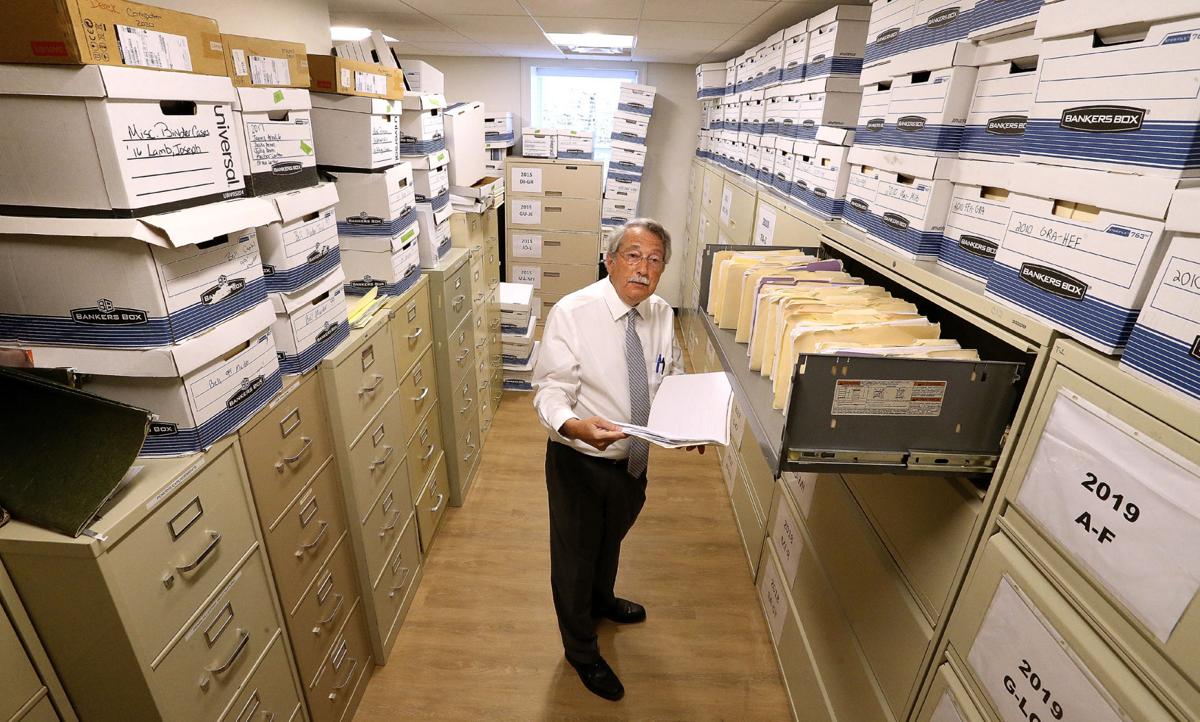 Winchester Commonwealth’s Attorney Marc Abrams in the file room of his office located in the Creamery Building in downtown Winchester. 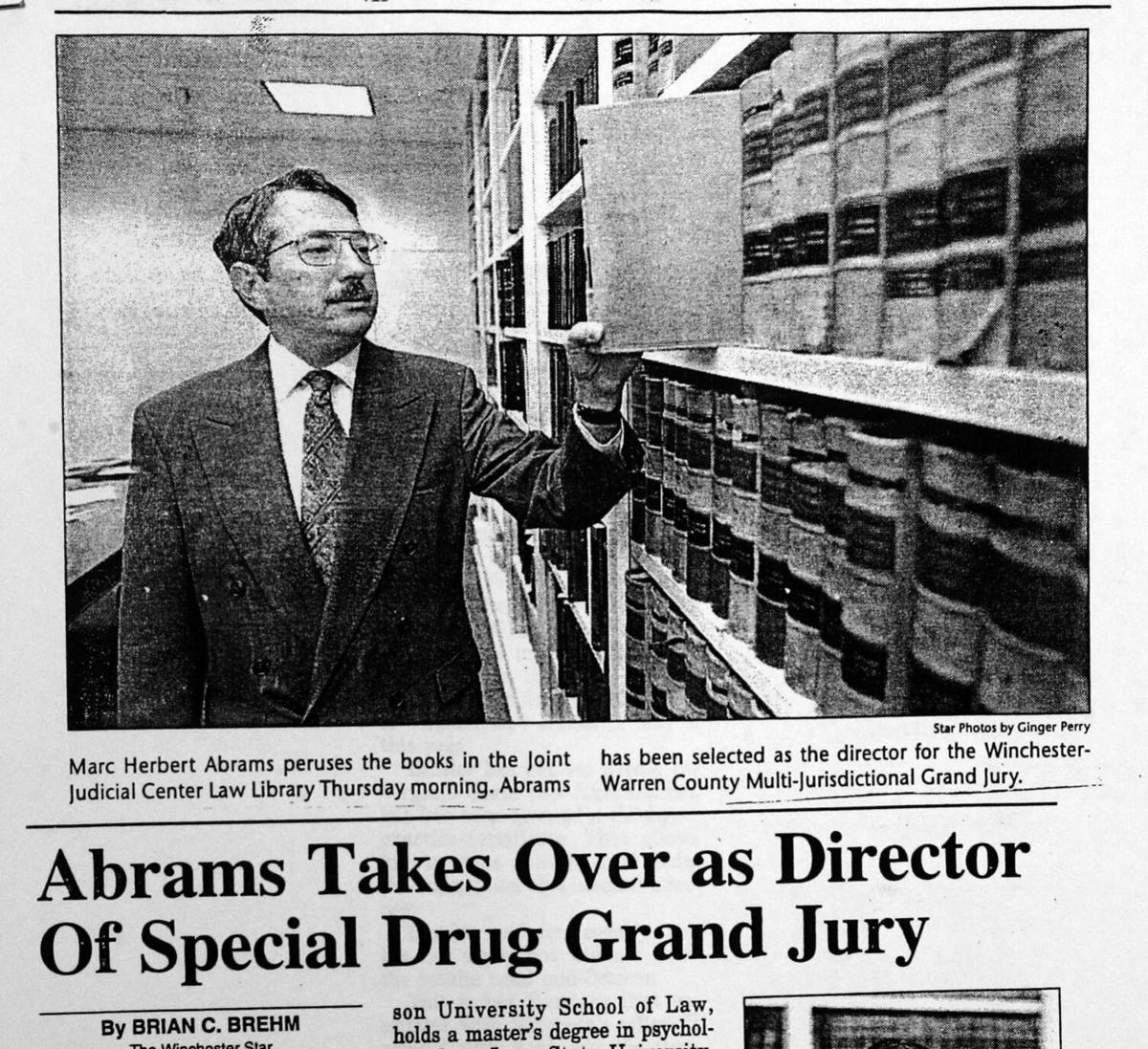 Marc Abrams was the focus of a Winchester Star article in September 1998.

Virginia Commonwealth’s Attorney Marc Abrams retired Friday. He is shown in his office Wednesday in the Creamery Building in downtown Winchester.

In a recent family photo, Winchester Commonwealth’s Attorney Marc Abrams is shown with his wife, Mena, and their daughter, Shoshana, and their golden retriever.

Winchester Commonwealth’s Attorney Marc Abrams in the file room of his office located in the Creamery Building in downtown Winchester.

Marc Abrams was the focus of a Winchester Star article in September 1998.

WINCHESTER — Marc Abrams kept a print on his office wall that said, “Justice, only justice, shall thou pursue.”

The print came down this week, and Abrams’ pursuit of that elusive goal ended Friday when he retired as Winchester Commonwealth’s Attorney.

Abrams, 71, defines justice as a resolution that best serves victims, victimizers and the community, while balancing deterrence, punishment and rehabilitation. There are no one-size-fits-all solutions. Justice is decided on a case-by-case basis and often involves excruciatingly difficult choices.

“It’s really hard to know what’s right,” said Abrams, who joined the Winchester Commonwealth’s Attorney’s office in 1987 as an intern and was appointed commonwealth’s attorney in 2015. “That’s the most stressful part of being a prosecutor.”

When Abrams was hired he was just one of three part-time attorneys in the office, which handles cases in circuit, general district and juvenile and domestic relations courts. The office now has nine attorneys and an annual budget of about $1.6 million.

In the late 1980s, the office handled about 300 cases annually, according to Tina Fitzwater, the office’s director of legal support and administrative services. In 2019, the year before the COVID-19 pandemic caused lengthy trial delays and a reduction in cases, the office handled 7,620 new and ongoing cases.

Abrams came to Winchester from Baltimore, where he grew up. His father, Saul Abrams, emigrated from Romania as an orphan in the 1920s. Abrams, who has served as president of the board of directors of Beth El Congregation in Winchester, recalls his father telling him about the irony of being denied off-base housing because he was Jewish while serving in the Army during World War II. His father later worked as a real estate broker and shortened his name from Abramovitz to Abrams because it was easier for customers to spell.

“He came with virtually nothing, and, not that we’re rich, but both of his kids have advanced degrees and are doing OK,” said Abrams, who deeply values education.

After earning a psychology degree from the University of Maryland in 1971 and a master’s degree at Iowa State University in 1975, Abrams came to Winchester in 1977 to work as a clinical supervisor at Northwestern Community Services, an area drug and mental health treatment provider. Because many criminal defendants are mentally ill, Abrams worked a lot with attorneys and decided to pursue a legal career. He left Northwestern in 1985 and earned a law degree at George Mason University.

Paul H. Thomson, Winchester commonwealth’s attorney from 1986 to 2001, hired Abrams. He knew Abrams was smart, but he recalled being surprised how often Abrams’ name was called for awards when he graduated from George Mason.

Thomson said Abrams turned down an offer to work on the George Mason Law Review, a prestigious legal magazine. Working on the magazine makes it easier for graduates to get hired at top legal firms or to clerk for the Supreme Court. Thomson urged him to accept the offer. But Abrams was eager to work as a prosecutor. While corporate and real estate law are more profitable and less stressful, Abrams said he liked the action involved in prosecutions and working to get justice for victims.

Abrams’ affability, expertise in constitutional law and background in the mental health field served him well as a prosecutor and later as an elected official, Thomson recalled. When Alexander R. Iden was named a judge in the 26th Judicial Circuit in 2015, Abrams was appointed to fill the vacancy and won a special election later that year to fill Iden’s unexpired term. Abrams ran as an independent. He was re-elected in 2017, running unopposed.

“The old saying is the people who do not want elected office are really the ones you should have in elected office,” Thomson said. “Marc ran for the seat because everybody went to him and asked him to do it and that was based on them knowing him to be extremely fair, compassionate and smart.”

Defense attorney William A. “Beau” Bassler began his legal career as an assistant commonwealth’s attorney in Winchester in 1998 after interning there the previous year. Bassler, who left the office in 2001, credits Abrams with mentoring him.

“I was right out of law school and only knew what you could learn from professors and books and I learned an immense amount from him,” Bassler said. “He was able to show me the practical application of the law.”

As a defense attorney, Bassler frequently tried cases that Abrams was prosecuting. He said Abrams could sometimes be rigid in plea negotiations, but he admired his analytical and highly ethical approach and ability to stay cool despite the often emotionally volatile aspects of cases.

“He’s trying to figure out what the most just result is, what’s required for justice to prevail,” Bassler said. “He wasn’t always easy to deal with, but he was always respectful, civil and a gentleman.”

Jim Pearce, Winchester victim/witness director, worked closely with Abrams after Pearce was hired in 1995. While victims and their families aren’t required to support plea agreements or sentencing recommendations, judges and prosecutors prefer they do. Violent crime victims often want stricter punishment than what is proposed, but Pearce said Abrams was good at getting their support because of the compassion and patience he showed them.

Another difficult part of being a prosecutor is reviewing evidence involving violent crimes. Prosecutors often go to crime scenes and review gruesome or disturbing photos. Abrams said he tried to remain detached, “but many of the times you just say, ‘Wow, that is pretty terrible.’”

Reflecting on his career, Abrams said he believes he made a difference in his 34 years as a prosecutor. He credited his colleagues for good teamwork and said he tried to balanced empathy and the need for proportionate punishment.

“There are some people that are malicious and we need to protect society from them,” he said. “But that’s not the majority of people appearing before the courts. We need to know the difference and help those that we can.”

In retirement, Abrams plans to spend more time with his wife, Mena. The two married in 1973. They have a 32-year-old daughter, Shoshana Abrams. Abrams said he and his wife plan to travel, including trips to Hawaii and Israel. He also plans to audit college courses in history and philosophy.

Heather D. Hovermale is now serving as acting commonwealth’s attorney and running as an independent candidate for the office in the Nov. 2 election.

sounds to me he's struggling with how to reconcile in his own mind "Why I didn't charge the cops that shot and killed D'Londre Minifield and planted a gun under the front of his head.

Congratulations Marc! Thank you for your service! It was an honor working with you. Godspeed.