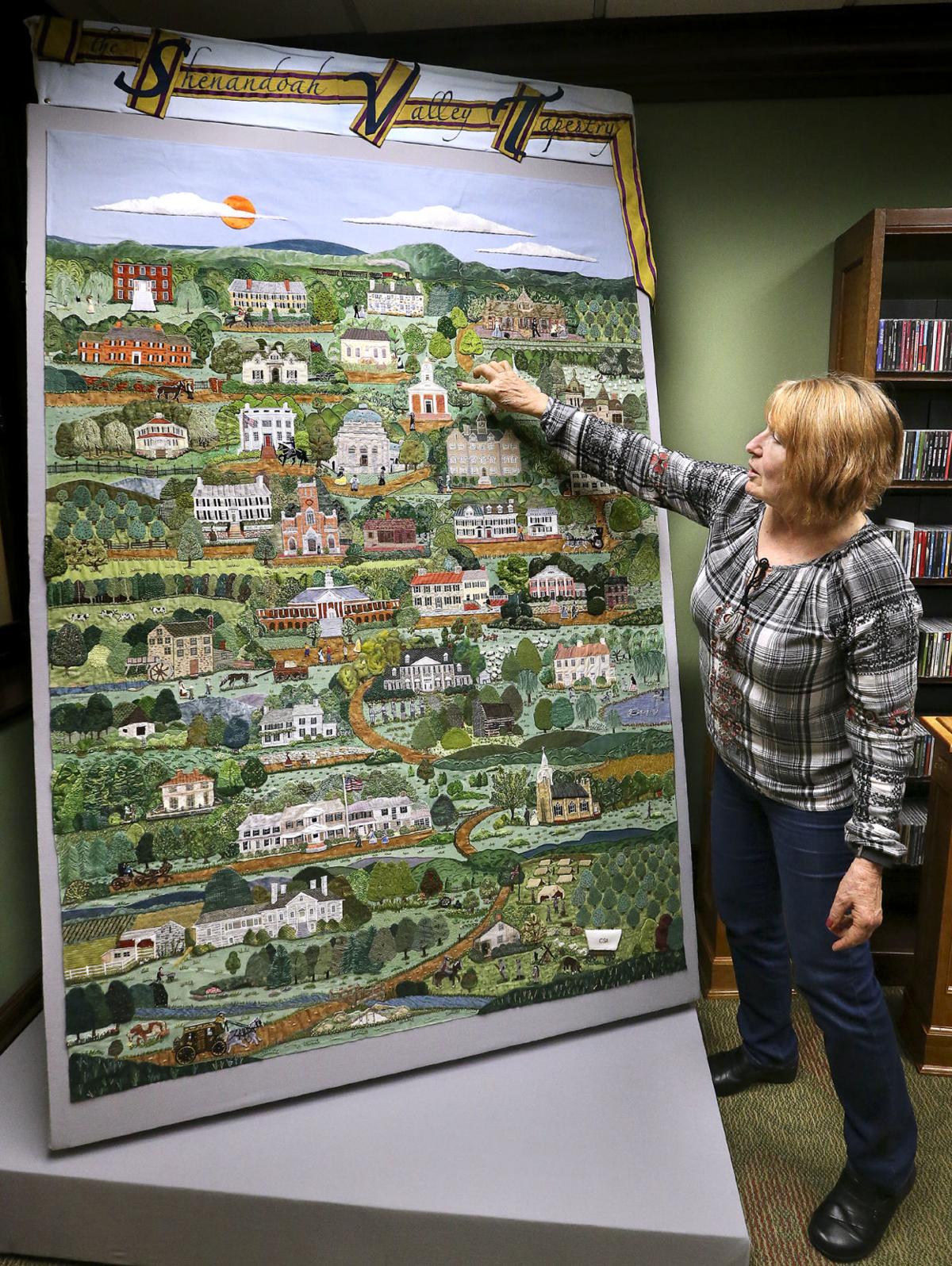 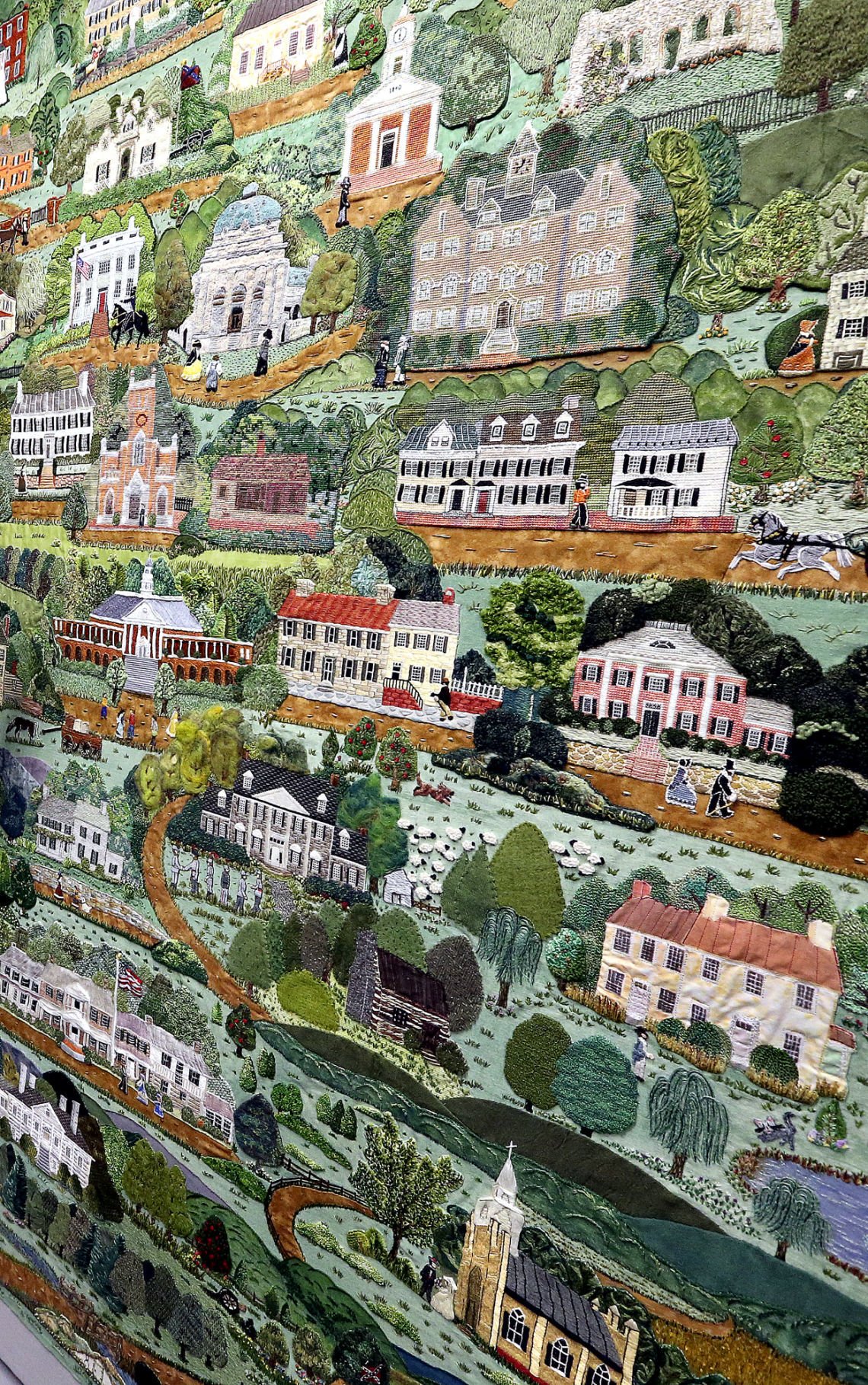 WINCHESTER — Stitch by stitch and yarn by yarn, the Shenandoah Valley Tapestry has taken shape and is now hanging in Handley Library for the community to enjoy.

Just as books become movies and those movies become Broadway musicals, one creative project often inspires another one.

That’s just how the Shenandoah Valley Tapestry came about.

In 1994, author Margaretta Barton Colt published “Defend the Valley” using excerpts from the journals, letters and memoirs of her ancestors who were caught up in the hardships of the Civil War.

Colt then commissioned artist Page Huff Dillon in 1995 to a create a painting based on the book. Dillon created a work of art featuring 34 iconic structures in the northern valley.

Colt donated the rights to the Winchester Frederick County Historical Society, which had printed posters and small cards made from the artwork.

And then Irina Galounina thought would be a good idea to create a tapestry from the painting.

“From the very beginning we wanted it to be a community project,” said Galounina, a member of the Multicultural Club Collage, which works with the Handley Library to teach children about different cultures.

The Winchester Chapter of the Embroiderers’ Guild of America readily agreed to participate in the project.

The first stitch on the first house was made in 2015. Some of the buildings were created by experienced needleworkers. Other parts were made by anyone willing to take a stab at making a single stitch. The youngest person to work on the tapestry was 6 years old.

The name of anyone who took a stitch was written in a special book compiled by Becky Ebert, archivist for Handley Library and the Winchester-Frederick County Historical Society.

After the various buildings were finished they were sewn onto 10 panels and then the panels were sewn together to make a seemingly seamless work of art.

There are many tiny treasures to be found on the tapestry, including 400 trees. The apples in the one of the orchards are made of tiny red buttons. Several animals are depicted. Someone stitched Colt standing in front of Handley Library wearing a yellow dress.

The tapestry is on display on the main entrance level of Handley Library where it will stay for at least a year, maybe two, Ebert said.

Ebert wasn’t an experienced needleworker but she wanted to get involved and helped create the tapestry’s Handley Library.

“They were very kind and patient with me and told me how to do things,” Ebert said. “Mostly, I shared historic stories behind the structures.”

Individuals and organizations “adopted” each of the images for $100 each to help pay for long-term preservation of the artwork.

Even though the tapestry is finished now, it may not be the end of the journey.

Galounina thinks the story of how the tapestry was created — the many hours of work and the hundreds of people who worked on it — might make a good book. From book to painting to tapestry to book again — the creative cycle continues.

Nice to see culture that isnt riddled with guilt and self esteem.