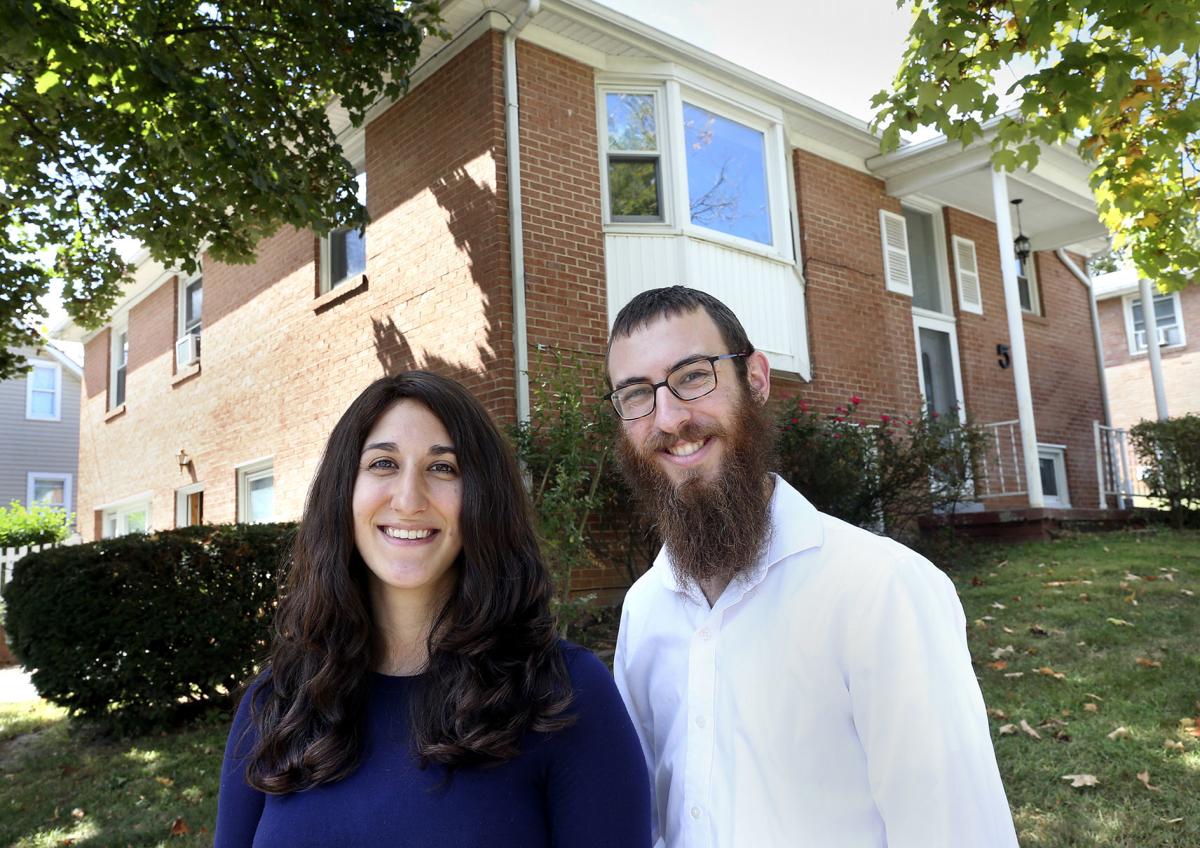 Rabbi Yishai Dinerman, 28, and his wife, Bluma Dinerman, 27, from Brooklyn, N.Y., have opened the Chabad Jewish Center of Winchester at 5 Montague Ave.

Rabbi Yishai Dinerman, 28, and his wife, Bluma Dinerman, 27, who have relocated to Winchester from Brooklyn, N.Y., have opened the Chabad Jewish Center of Winchester at 5 Montague Ave. In the photo behind them is the late Rabbi Menachem Mendel Schneerson, an influential Chabad leader.

Rabbi Yishai Dinerman, 28, and his wife, Bluma Dinerman, 27, from Brooklyn, N.Y., have opened the Chabad Jewish Center of Winchester at 5 Montague Ave.

Rabbi Yishai Dinerman, 28, and his wife, Bluma Dinerman, 27, who have relocated to Winchester from Brooklyn, N.Y., have opened the Chabad Jewish Center of Winchester at 5 Montague Ave. In the photo behind them is the late Rabbi Menachem Mendel Schneerson, an influential Chabad leader.

The Dinermans relocated from Brooklyn, N.Y., to 5 Montague Ave., where the Chabad Jewish Center of Winchester is located on the first floor of their home.

The center is a space for religious services, educational programs, Sabbath and holiday meals, and social programs for Jewish community members and Jewish students attending nearby Shenandoah University.

The Dinermans practice traditional Judaism, also known as Orthodox Judaism, but their center is open to all Jewish denominations. The center differs, in part, from a synagogue, such as Beth El Congregation on Fairmont Avenue, which is Winchester’s only synagogue, in that it does not charge dues, Dinerman said.

Dinerman, 28, grew up in San Diego and completed his rabbinical studies at the Rabbinical College of America in Morristown, N.J. His wife, who is 27, was raised in Pittsburgh and studied at seminaries in Brooklyn and Jerusalem. She has two siblings who opened Jewish centers in Harrisonburg and Altoona, Pa.

Over the past year, the Dinermans visited Winchester several times to celebrate Jewish holidays with people in the community, including lighting a 15-foot-tall menorah on the Loudoun Street Mall during Hanukkah in December. They got involved in outreach in the region through Chabad of The Shenandoah Valley in Harrisonburg, which Bluma Dinerman’s sister helps run. As the Dinermans’ visits to Winchester continued, people suggested they move here.

Hanging in one of the rooms of the Chabad Jewish Center is a black-and-white photograph of the late Rabbi Menachem Mendel Schneerson, an influential leader in Chabad, one of the largest and fastest-growing Jewish organizations. About 4,900 Chabad families operate 3,500 institutions in 100 countries and territories. Virginia has 14 Chabad centers, with Winchester being the newest location.

“We’re here to reach out to the Jews with love,” Dinerman said.

Dinerman’s grandfather was a Holocaust survivor, having escaped from a ghetto in Poland just before Rosh Hashanah, which is the Jewish New Year. During the Holocaust, ghettos were designed by Nazis to isolate Jews from the non-Jewish population. Living conditions in ghettos were extremely difficult, and many Jews were shot or sent to concentration camps.

Dinerman’s grandfather was a teenager when one night he saw lots of stirring about in the ghetto. He then saw people escaping through a hole created in a fence by an electrician. He escaped with the others, but a bullet grazed his neck as German soldiers began gunning down the escapees with machine guns. Bleeding, he laid on the ground pretending to be dead until the next night, when he crawled away and escaped to the woods. He later joined the Jewish partisans, a Jewish resistance group that fought against the Nazi regime.

Because his grandfather’s escape occurred near Rosh Hashanah, the holiday means a lot to Dinerman. This year, Rosh Hashanah, which means “head of year,” begins Sunday and ends Oct. 1.

The center will be open for a communal dinner for Rosh Hashanah for the entire Winchester Jewish community at 6:30 p.m. Sunday. There also will be shofar-blowing ceremonies for Rosh Hashanah on Monday and Tuesday. A shofar is a musical horn typically made from a ram’s horn that’s used in Jewish religious ceremonies.

Anyone who wants to attend Sunday’s dinner should RSVP at JewishWinchester.org.

As one might say, ברוכים הבאים (aka "welcome") to our lovely city. I hope Rabbi Dinerman and the Rebbetzin will thoroughly enjoy their life and work in Winchester.

Mazel tov! Thrilled that you are here; wishing you success!