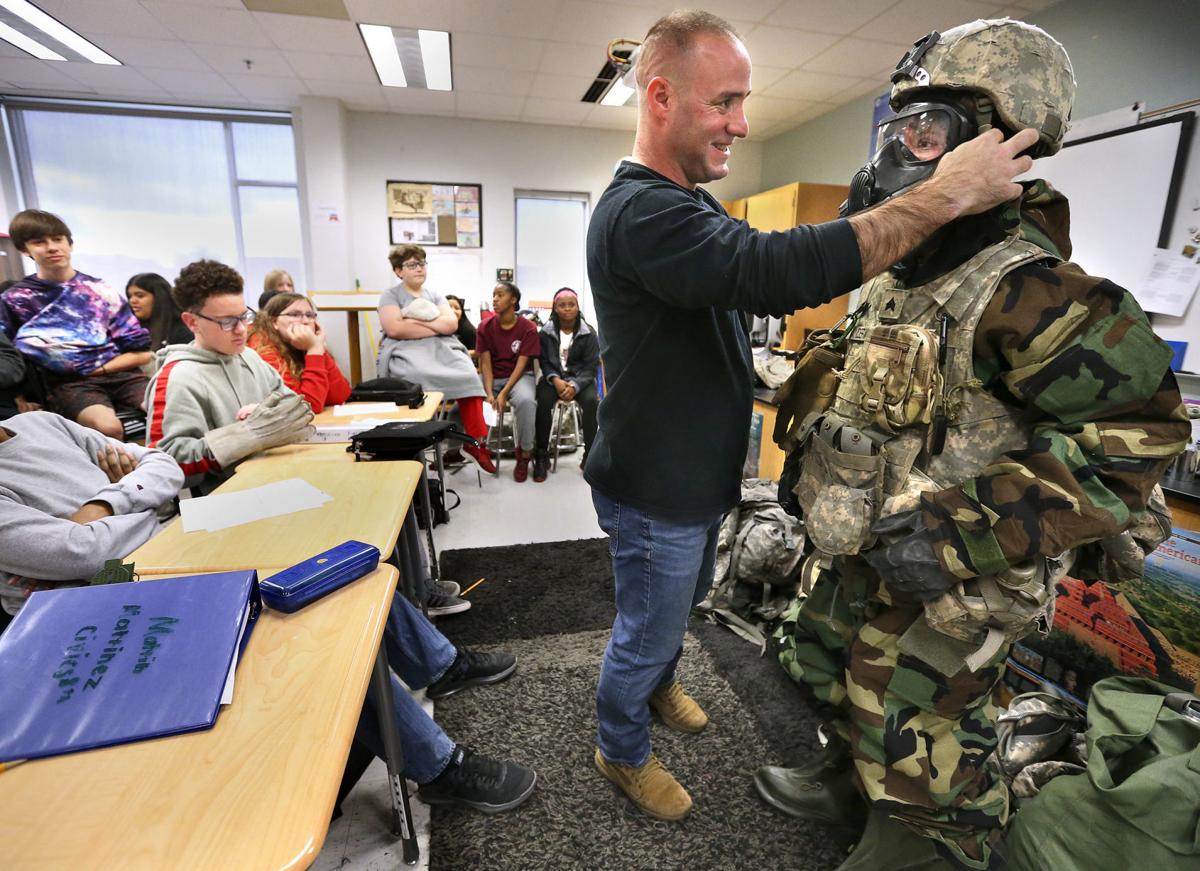 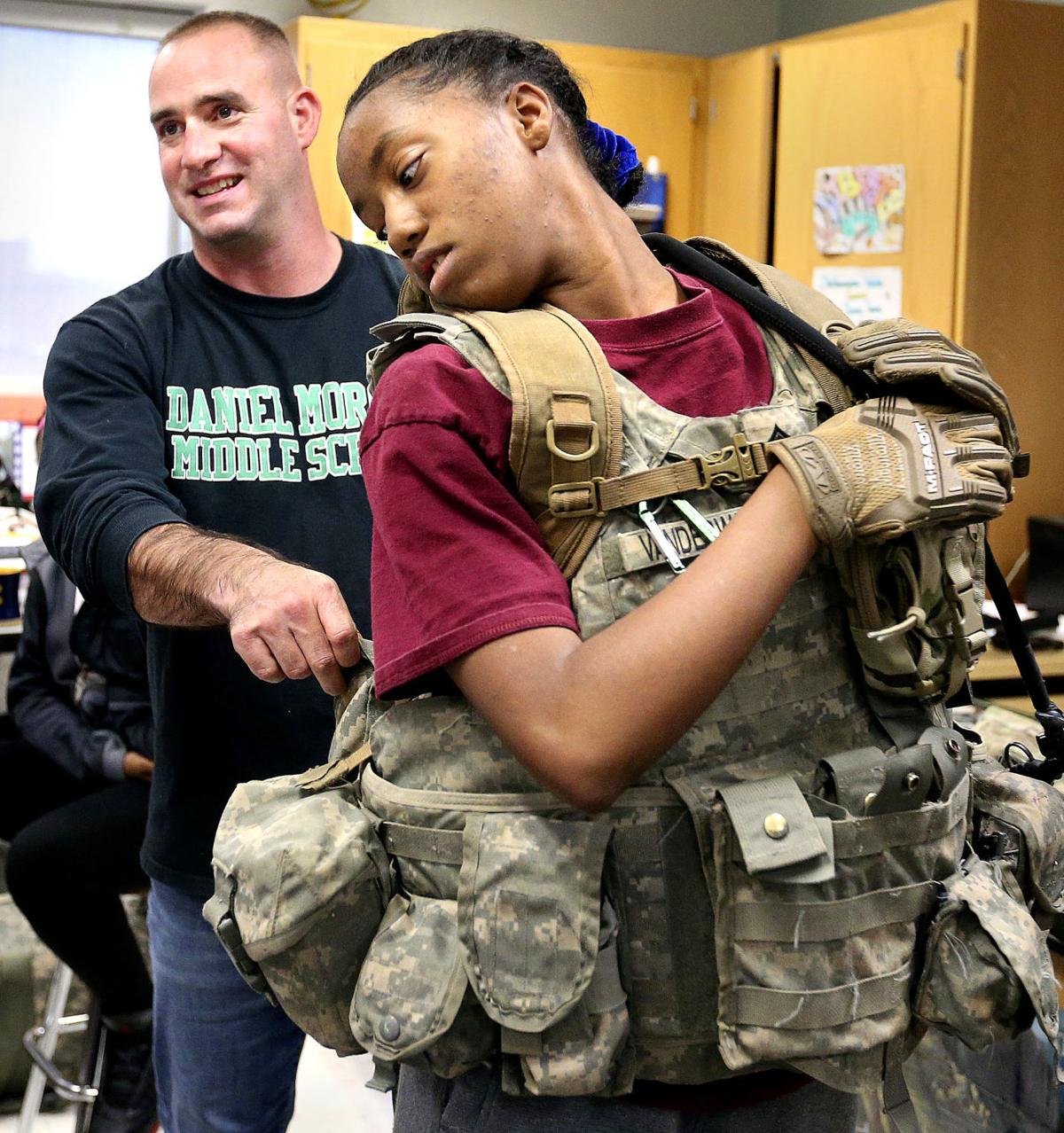 Michael Vanderwater shows what he carries during deployments and training as eighth-grader Amaya Henderson wears his gear.

Michael Vanderwater shows what he carries during deployments and training as eighth-grader Amaya Henderson wears his gear.

WINCHESTER — It’s no secret to the students in Michael Vanderwater’s civics class at Daniel Morgan Middle School that he’s in the military.

On Friday afternoon, eighth-grade students clustered in front of his classroom to get a good look at a line of military equipment. The line included boots, a camouflage tent, a vest that holds equipment, a uniform, a compass and much more.

Two students stood in front of the class as Vanderwater helped them put on the same gear he wears during military training. This showcase of military equipment was done in his class just as students get ready to learn more about service members on Veterans Day, which is Monday.

One of the students, Garrett Stickley, got to wear the same uniform Vanderwater would wear to protect himself against chemical weapons. The uniform was “hot,” and made it “hard to breathe,” Garrett said, but “fun” to wear. Garrett was wearing a gas mask and special waterproof boots that are also resistant to dangerous chemicals. The uniform, to no one’s surprise, was too big for Garrett.

Vanderwater pointed out to his students that each gas mask issued to soldiers came with a tube that could plug into a canteen. This allows a soldier to drink water without being exposed to dangerous chemicals that might be in the air.

Every month, Vanderwater has to complete training with the Virginia National Guard and sometimes must get a substitute teacher when he’s at training. School officials have been flexible and understanding about him missing class for training, he said.

Vanderwater grew up in a poor community in Greensburg, Penn. If he were to go to college, he knew he’d have to pay for it himself. He also had a brother in the Navy and a sister in the Air Force. He knew joining the military would help him pay for his education.

It’s a challenge balancing work as a teacher and serving in the military, particularly when it comes to leaving his family on a regular basis.

One of Vanderwater’s students Ja’kaya Copeland, 14, described him as a fun teacher, but who can get serious when it’s time to get work done. He’s also easy to talk to, she said.

Ja’kaya said she’s interested in civics and having Vanderwater as a teacher. At the end of the class, Ja’kaya asked Vanderwater why people with epilepsy are not allowed in the military. Ja’kaya asked because she has a family member who wanted to join but couldn’t.

At first Ja’kaya wanted to join the military, but she doesn’t want to leave her mom for extended times. She also said she learned from Vanderwater’s class on Friday that a job in the military requires carrying a lot of gear and that it’s hard to leave family.

But she might consider being a nurse to help those in the military, Ja’kaya said.

Vanderwater has taught at Daniel Morgan for four years. His military skills have helped him learn how to handle difficult situations, including deescalation when it’s necessary between students. Discipline was another big skill he learned in the military that he applies in class.

And his teaching skills come in handy when instructing fellow soldiers on new skills.

It’s important for his Daniel Morgan students to see there are people they know involved in the military, he said. But he said he would never pressure a student to join the military or make them think it’s easy.

“I think that in my eyes it’s helped me get to where I’m at, and I’m very happy,” he said. “Without that piece to the puzzle I don’t think I would be where I’m at. It’s definitely done a lot for me.”

WINCHESTER — At this year’s Veterans Day ceremony and breakfast at Millbrook High School, the theme was a reflective one — “We stand for those…