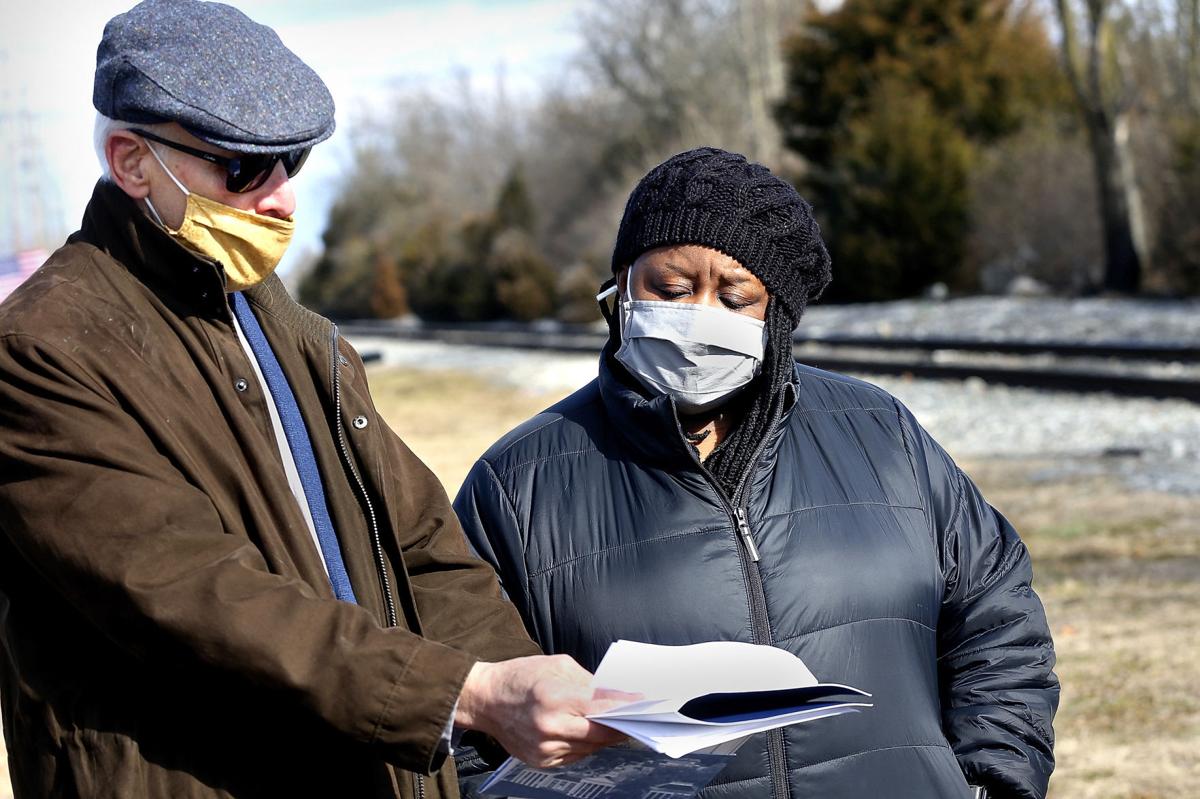 John D. Copenhaver Jr. of the Valley Interfaith Council and LaTasha Do’Zia of the Winchester Area Branch 7127 of the NAACP read the names of lynching victims from northern Virginia during a prayer vigil Friday in support of efforts to abolish the death penalty in Virginia. The vigil was held in Kernstown where William Shorter was lynched on June 13, 1893. 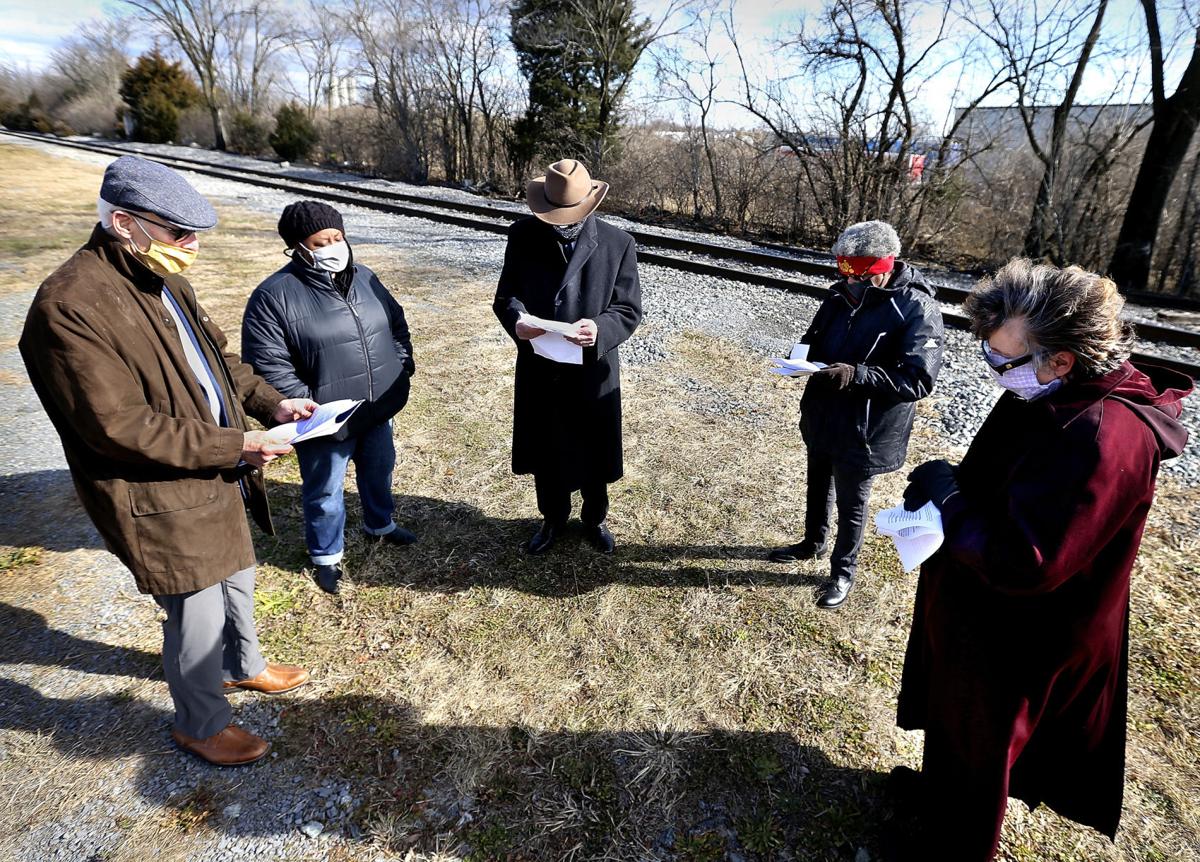 John D. Copenhaver Jr. of the Valley Interfaith Council (left) leads a prayer vigil Friday with members of the Winchester Area Branch 7127 of the NAACP at the site of the lynching of William Shorter on June 13, 1893, in Kernstown. The Valley Interfaith Council is advocating for the abolishment of the death penalty in Virginia. Shown with Copenhaver are NAACP members (from left) LaTasha Do’zia, Tyson Gilpin, Gwen Borders-Walker and Susan MacDonald.

John D. Copenhaver Jr. of the Valley Interfaith Council and LaTasha Do’Zia of the Winchester Area Branch 7127 of the NAACP read the names of lynching victims from northern Virginia during a prayer vigil Friday in support of efforts to abolish the death penalty in Virginia. The vigil was held in Kernstown where William Shorter was lynched on June 13, 1893.

John D. Copenhaver Jr. of the Valley Interfaith Council (left) leads a prayer vigil Friday with members of the Winchester Area Branch 7127 of the NAACP at the site of the lynching of William Shorter on June 13, 1893, in Kernstown. The Valley Interfaith Council is advocating for the abolishment of the death penalty in Virginia. Shown with Copenhaver are NAACP members (from left) LaTasha Do’zia, Tyson Gilpin, Gwen Borders-Walker and Susan MacDonald.

KERNSTOWN —At the site where a white supremacist mob lynched a Black man in 1893, five death penalty opponents on Friday prayed for its abolition comparing it to modern-day lynching.

The group was comprised of members of the NAACP Winchester Chapter 7127 and the Valley Interfaith Council. They said capital punishment is barbaric, kills innocent people and disproportionately kills Black people. They called it a vestige of the nation’s settler-colonial and Jim Crow past.

“Capital punishment is an expensive, racist, classist, error-prone system with no internal consistency,” NAACP member Tyson Gilpin said in a call-and-response prayer. “While we give thanks for the exonerated men and women whose lives have been spared since 1973, we rend our hearts over the individuals that remain on death row.”

The vigil was among several around the state organized by the Virginia Interfaith Center for Public Policy. Other protests occurred in Alexandria, Chesapeake and Roanoke.

The local protest occurred on railroad tracks by Top Gear Motors at 3383 Valley Pike (U.S. 11). It was there on June, 13 1893, that 19-year-old William Shorter — charged, but never convicted of attempting to rape a white woman — was dragged from a train, hanged and shot. The lynchers were never prosecuted.

Shorter’s murder was the only documented lynching in Frederick County or Winchester, but death penalty critics say many executions of Black men and women afterward were legal lynchings. Between 1900-1969, 68 Black men were executed in Virginia for attempted rape or rape, according to the center. No white man was ever executed for attempted rape or rape during that time period.

An infamous local case was that of Winchester resident Howard Walker, a Black man electrocuted in 1944 for raping a white woman. Gilpin previously said it was widely known that Walker and the woman were dating and the execution was a warning against interracial sex. Interracial marriage was illegal in Virginia until the U.S. Supreme Court case of Loving v Virginia in 1967.

Virginia is one of 28 states with the death penalty. After stopping executions during a federal moratorium, Virginia resumed them in 1982. Since then it has executed 113 men, second only to Texas, according to the center. While about 19% of Virginia’s 8.5 million population is Black, the center said 46% of those executed were Black.

The last person executed in Virginia was William Charles Morva, a mentally ill white man killed in 2017 for murdering a deputy and security guard during a 2006 jail break. There are currently two men on death row, according to the Department of Corrections. Both are Black.

The Rev. John D. Copenhaver, a council member, said council and NAACP members plan to lobby the area’s four lawmakers next week regarding three abolition bills in the legislature. Three of the four legislators — Del. David A. LaRock, R-Hamilton, Del. Bill Wiley, R-Winchester, and state Sen. Jill Holtzman Vogel, R-Upperville — have called themselves “pro-life” in calling for Virginia to pass a law mandating pregnant women give birth even if they want to have an abortion. Holtzman Vogel and LaRock didn’t return calls or emails on Friday evening regarding their death penalty stance.

Wiley said in an email that he’s troubled by the idea of the state having the power of life and death. Nonetheless, he said there were circumstances where it was justified. He said the 2009 execution of Edward Nathaniel Bell for the 1999 murder of Winchester police Sgt. Ricky Lee Timbrook was an example.

“It is to be used only in the rarest and gravest of circumstances,” Wiley said. “But it is something that does have a place in our law.”

However, Del. Wendy Gooditis, D-Clarke County favors abolition. Gooditis said in an email that if any of the bills get out of committee, she will vote for them.

She said the death penalty is a “cruel and antiquated practice” that disproportionately punishes minorities and the mentally ill and wastes taxpayer money. “The pragmatic and compassionate thing would be to end this horrible practice,” Gooditis said.

The Death Penalty serves a purpose as a deterrent. The person executed will never be a repeat offender.

When you loss a Child or a love one to a BRUTAL MURDER then tell me you don't believe in the death penalty.

Ah, so sentencing should be determined by victims and their families rather than a judge and/a jury? Exactly how far back do you want to see the justice system regress?

"Today we state that the death penalty is inadmissible, and the Church is fully committed to calling for its abolition worldwide." (Pope Francis in his latest encyclical letter "Fratelli Tutti")

The pope doesn't overrule dogma. God instituted the death penalty, the pope has no power to change that.

However, gods are mythological beings that have little to no bearing on secular, governmental processes. A god's opinion on the death penalty means nothing.

Also take not of what the Abrahamic god meted out death to punish. You'll be surprised.

Will NAACP Winchester Chapter 7127 and the Valley Interfaith Council make this same stand against abortion? Abortion is also 'barbaric, kills innocent people and disproportionately kills Black people' No human should advocate for the killing of another human!!

lol... not even close to the same topic, but good on you for trying your best!

Murder is murder Bryan, so it is very much the same topic, but good for you to do you best to ignore that liberals are murdering babies to the tune of 1,000 per day :(

@john, I would bet that it won't be long before we find out that Donald Trump has paid for quite a few abortions to cover up his extramarital affairs. And his cult will then become pro-choice when it could affect the reputation of a man.

@Steve - Only Leftists can, with utter conviction (ha!), stand and cry about criminals being sentenced to death for serious, heinous crimes, and, in the same breath, rabidly support the murdering of the unborn. Totally logical.

If law enforcement and the judicial system never made mistakes and were free of racial bias, Blondie, you might have a case.

If you take a life, then your life should be taken, period.

Is that Old Testament or sharia law you wish to see imposed on the American system?

that's sharia blondie doctrine...thank "god" it is not law

Lol! Please show us where in the Torah it says that... Go back to defending the lives of criminals while advocating for the murdering of the unborn because that's... logical.

Considering the fact that most laws from the Torah will prescribe the death penalty for any abomination from murder to tattooing, you really have no leg to stand on here. And read up on Numbers 5:11–31 before mouthing off about abortion.

At least you tried...

@Doc, would like to show me what the Old Testament classifies as an abomination and what the punishments were for those offenses?

Nope. I'll just say that, within the CONTEXT of the rest of the world at that time in history, our laws were necessary to preserve our beliefs and culture. Actions have consequences, right? Don't like how things are run? Nobody was stopping them from leaving...

@Doc, good on you for trying!

Do you admit that we are a nation of laws? And that the laws can be changed to better fit a changing society. No one is giving clemency to those sentenced to the death penalty, they8 are already serving for the consequence of their actions.

Nothing is stopping you from leaving if you don't like the abolition of the death penalty. Maybe Saudi Arabia or Iran would be better?

@doc? You still there?

What New Testament Bible verse has led you to this belief?