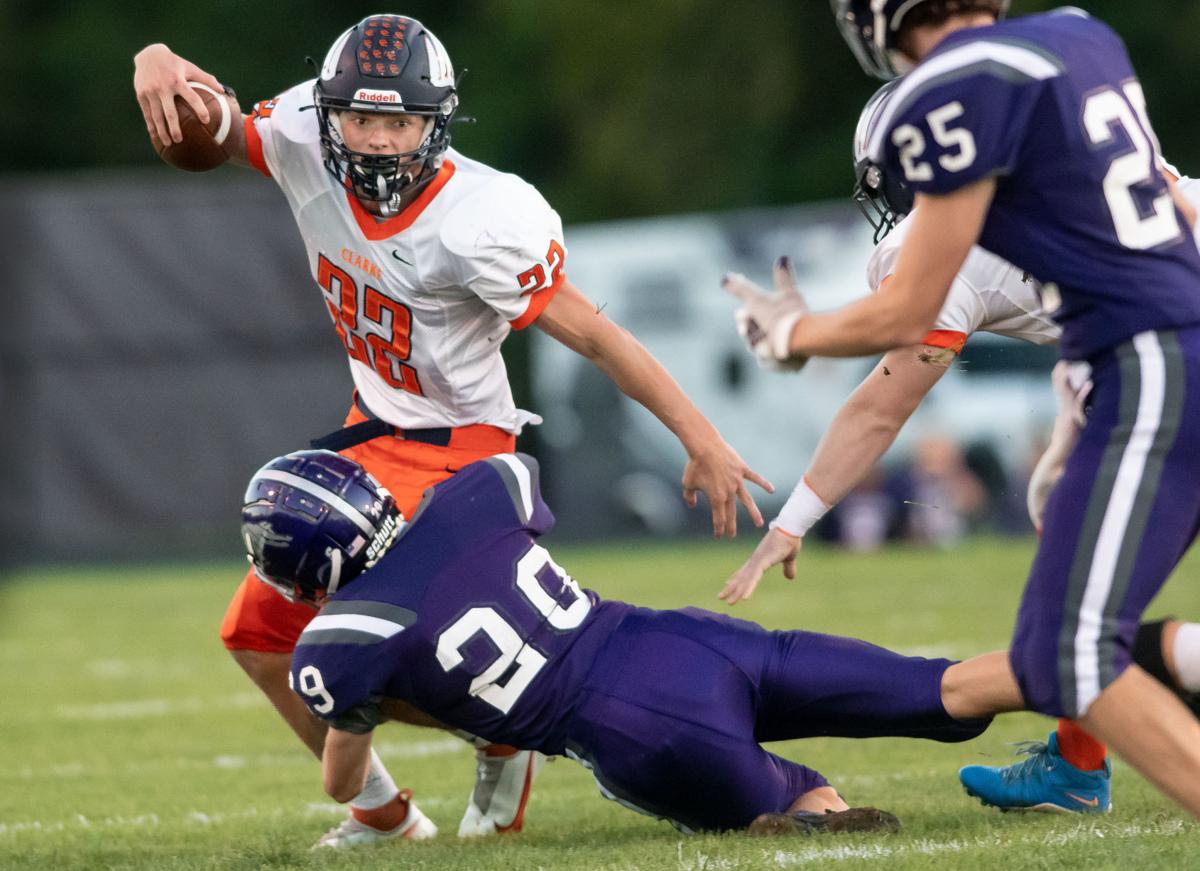 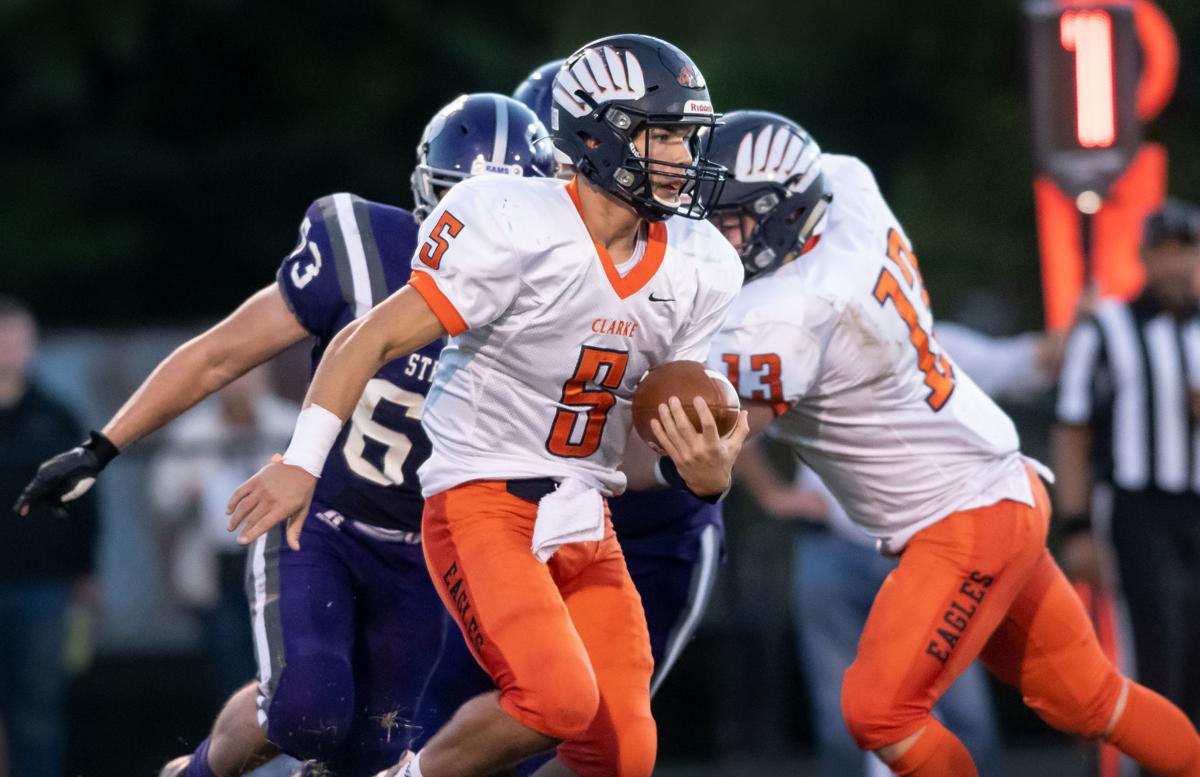 STRASBURG — Clarke County coach Casey Childs was a little worried this week about his team would respond to the challenge of playing an undefeated team for a second straight Friday.

Childs could breathe a sigh of relief after the game as his squad overcame a slow start and pulled out a 22-12 Bull Run District victory over Strasburg.

“After the big emotional game last week against Central, I was scared a little bit all week about a little bit of an emotional letdown,” Childs said. “That game was incredible last week. So it went kind of like I thought early on. But hats off to our kids. They responded and made some plays.”

It appeared the Eagles were going to take advantage of a Strasburg miscue early on when a muffed punt gave Clarke County the ball at the Strasburg 24. However, on the next play a Clarke County fumble gave the ball right back to Strasburg.

The Rams took advantage. Strasburg running back Brady Neary ran for 63 yards to the Clarke County 7 on the next play. Two plays later, Strasburg junior quarterback Ryan Roller scored from 6 yards out for a 6-0 lead with 8:50 left in the opening quarter.

“We weren’t ready to play, and I take responsibility for that,” Childs said.

The Rams (3-1, 0-1 Bull Run) used another big play on offense to keep the momentum going. On third-and-9 from the Strasburg 48, Roller connected with Griffin Carter for a 45-yard pass play to the Clarke County 7.

The Rams were unable to score as the Eagles stopped them on three straight running plays. On fourth-and-goal from the Clarke 3, Ryan Roller threw over a wide-open Neary’s head with 1:03 left in the opening quarter.

“I feel like we came out really slow, actually,” Clarke County junior Kyler Darlington said. “They came out and popped us good. At the beginning of that game, I was getting scared. But I kept my head up because I knew what we were capable of.”

“We came right back down and scored, and from there it was good,” Darlington said. “But we got to come out with more intensity against better teams like that.”

Darlington made one of the game’s biggest plays on special teams. Strasburg punter Neary couldn’t handle the snap and bobbled the ball. Darlington was able to pick it up and ran 35 yards for the touchdown and a 12-6 lead with 4:01 left in the second quarter.

“I think someone tried to pick it up and they bobbled it and I was right there, right place, right time,” Darlington said. “I picked it up, turned around and ran. I had a blocker in front of me. I was able to run around and I beat the last defender to the end zone. I think that got us going, got me going. I think that put us in a good spot for the whole game.”

The Eagles added a 24-yard field goal by Christopher LeBlanc in the final seconds of the half for a 15-6 edge. The Eagles went 42 yards on nine plays to set up the field goal.

After forcing a punt to start the second half, the Eagles quickly extended the lead. Clarke County went 44 yards on just two plays with Darlington scoring on a 12-yard touchdown run for a 22-6 lead with 8:45 left in the third quarter.

Strasburg put together a solid drive on its next possession. The Rams went 80 yards in 15 plays. Strasburg senior Griffin Turpen scored on a 6-yard run with 11:53 left in the game to cut the lead to 22-12. Strasburg’s 2-point conversion was intercepted in the end zone.

Childs said he was pleased with his defense, which held the Rams to 232 total yards.

“I like our defense a lot,” Childs said. “We’ve got a freshman linebacker [Carson Chinn] who is a very talented player. The secondary is very athletic. Cordell Broy made some outstanding plays in the secondary tonight. And then up front we’ve got some size and some athleticism. And our kids played well. We’ve played great defense so far this year and tonight showed that.”

Darlington said it was good to come away with two good wins on back-to-back weeks.

“Beating two great teams is awesome,” Darlington said. “Both those teams played great. Strasburg played great. It could have went either way. It was a great game.”

Clarke County was originally supposed to play Mountain View next week, but the Generals had to cancel their season due to a shortage of players. Childs said they are still looking for an opponent, but if they don’t find one they will just take the forfeit.

Childs said he was just happy to come out with back-to-back wins against quality Bull Run District teams.

“I thought the Bull Run was going to be like that this year,” he said. “It was going to be solid top-to-bottom. So we ran through a little bit of gauntlet right there for two weeks, and I’m real excited for our team, and our community and our coaches.”