You are the owner of this article.
Edit Article Add New Article
You have permission to edit this article.
Edit
Login
Home
News
Opinions
Sports
Obituaries
Life
Advertise With Us
Classifieds
Jobs
Events
Digital Replica
1 of 6 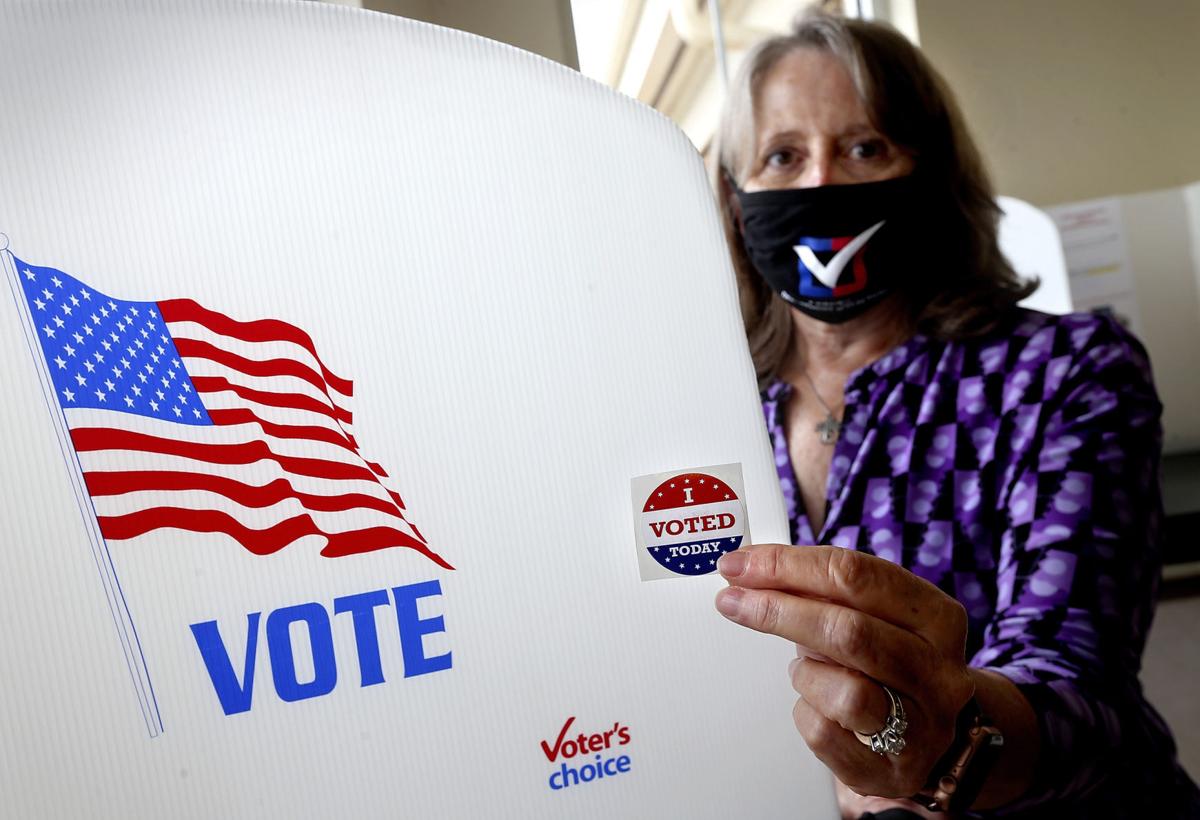 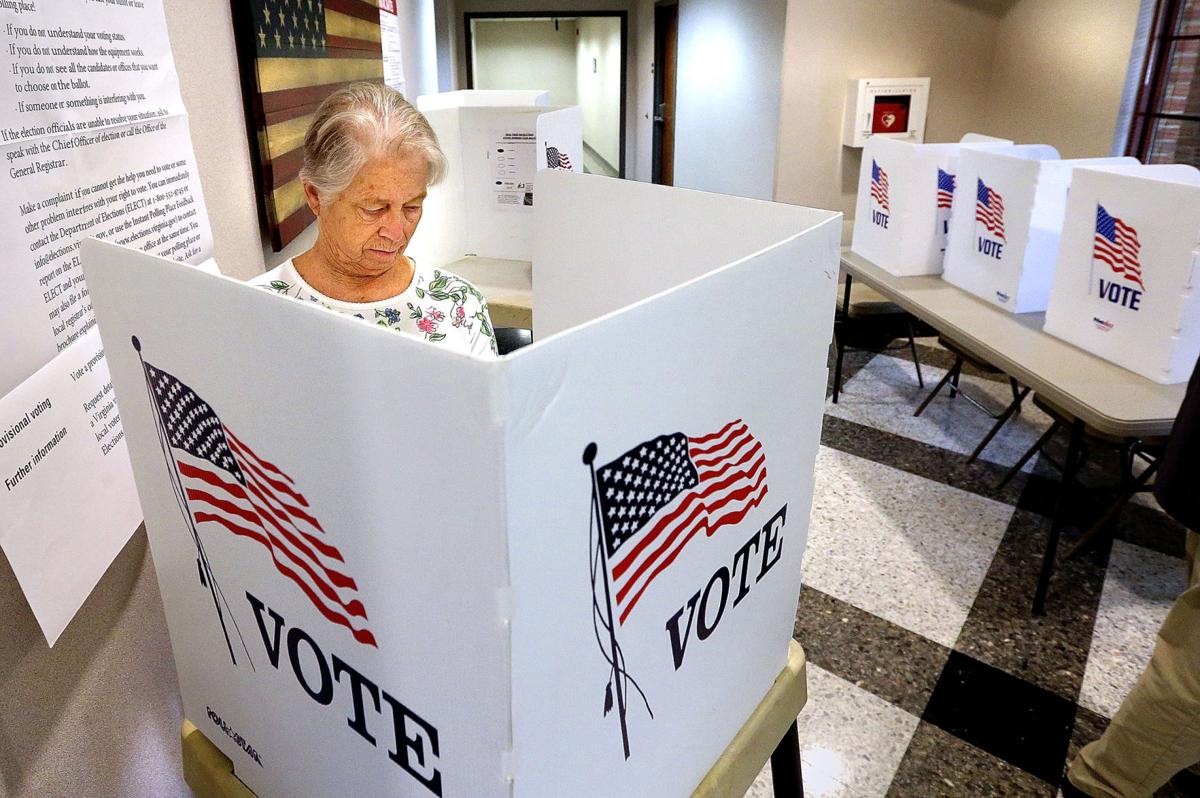 Pat Radney of Stephens City casts her ballot in the Nov. 2 election in a hallway at the County Administration Building on North Kent Street in Winchester on the first day of early in-person voting in Virginia. Early voting continues until Oct. 30.

Frederick County voters line-up to cast their ballots at the County Administration Building on North Kent Street on Friday on the first day of early in-person voting in Virginia for the Nov. 2 election. 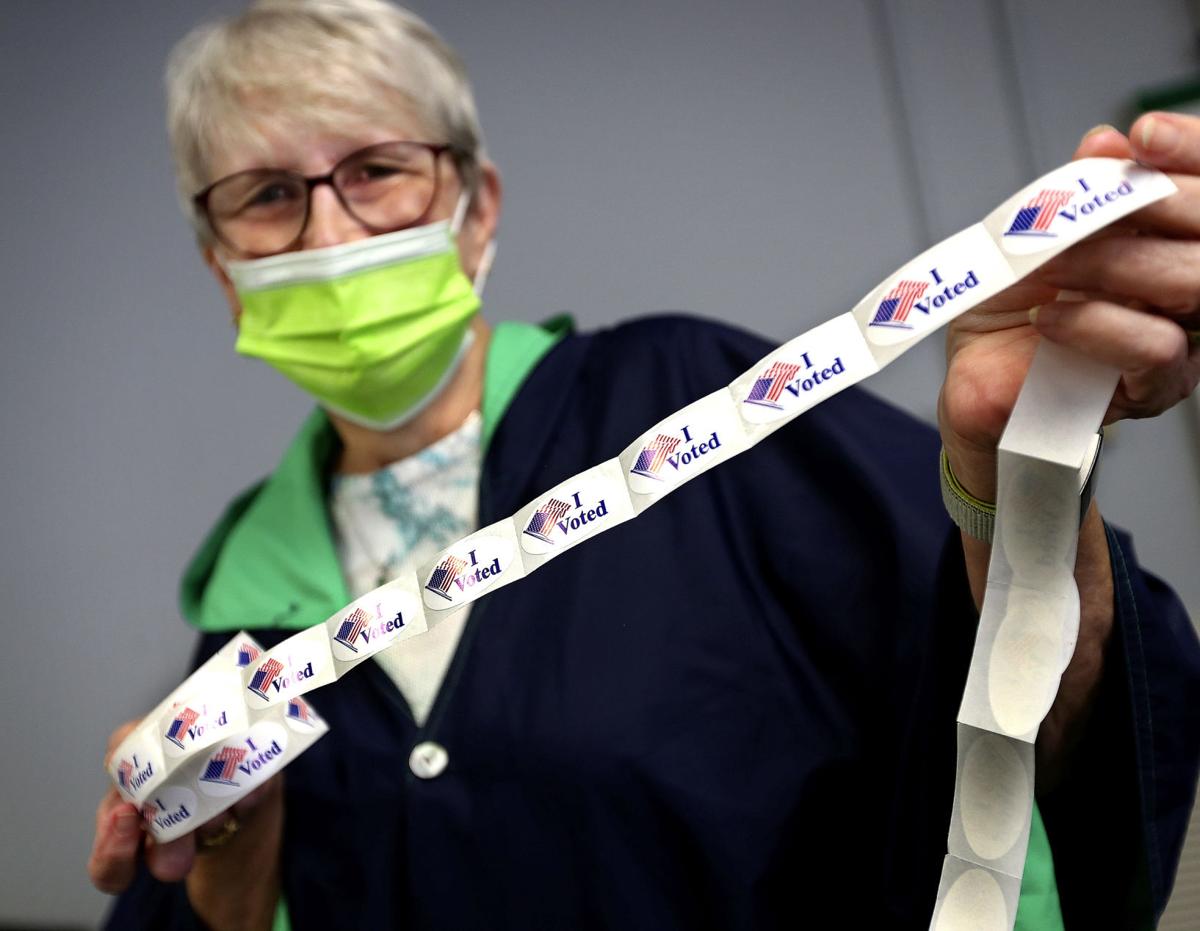 City of Winchester residents who voted in the Nov. 2 election at the Voter Registration Office on East Lane Friday were given an "I Voted" sticker by Officer of Election Mary Carolynn McLoughlin. 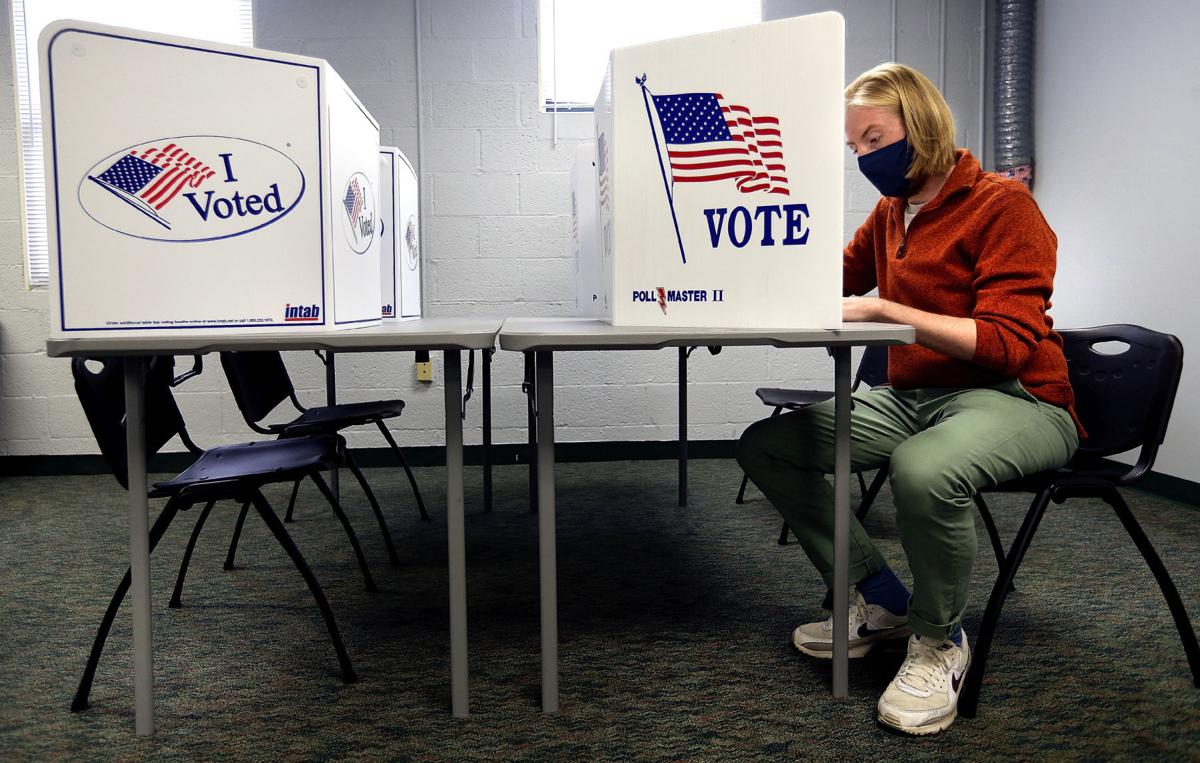 Sam Iden casts his ballot at the Winchester Voter Registration Office on East Lane as early in-person voting for the Nov. 2 election began in Virginia Friday. 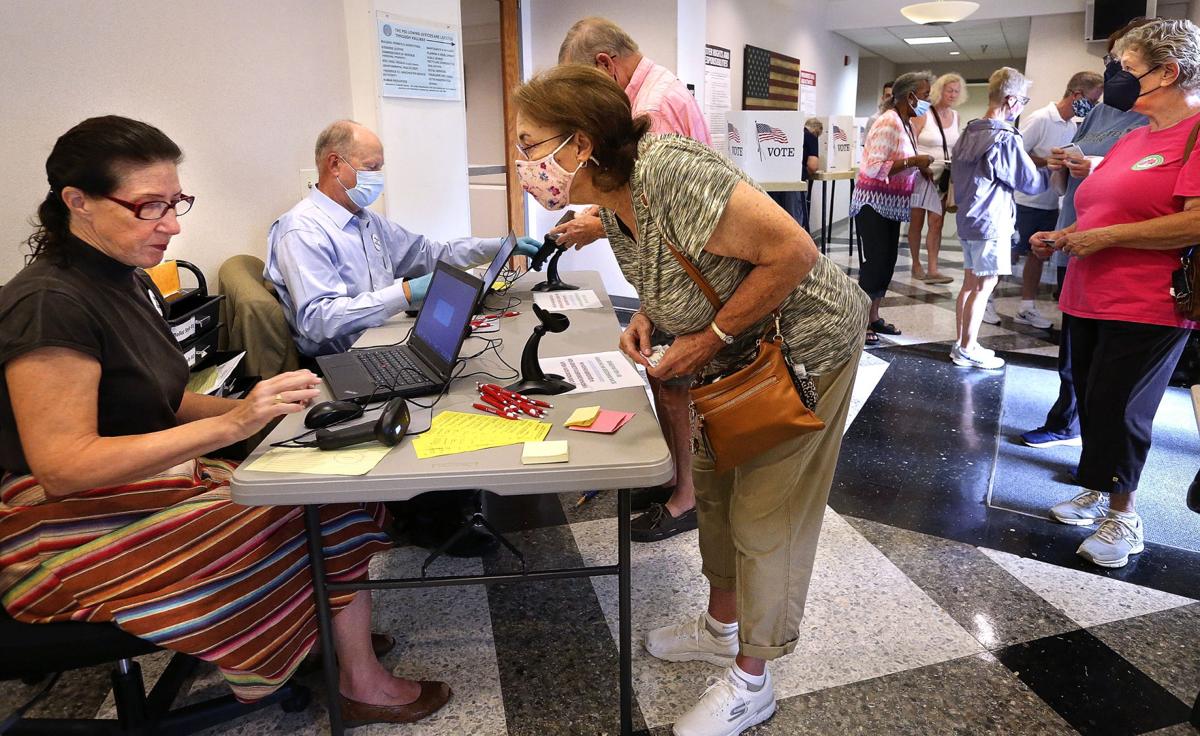 Pat Radney of Stephens City casts her ballot in the Nov. 2 election in a hallway at the County Administration Building on North Kent Street in Winchester on the first day of early in-person voting in Virginia. Early voting continues until Oct. 30.

Frederick County voters line-up to cast their ballots at the County Administration Building on North Kent Street on Friday on the first day of early in-person voting in Virginia for the Nov. 2 election.

City of Winchester residents who voted in the Nov. 2 election at the Voter Registration Office on East Lane Friday were given an "I Voted" sticker by Officer of Election Mary Carolynn McLoughlin.

Sam Iden casts his ballot at the Winchester Voter Registration Office on East Lane as early in-person voting for the Nov. 2 election began in Virginia Friday.

WINCHESTER — Early in-person voting for the Nov. 2 election began Friday in Virginia and will continue until Oct. 30.

Voting is taking place locally at voter registration offices. Voters fill out their ballot and feed it into a machine. Curbside voting is also available.

Frederick County resident Canon Cochran was among the voters who cast their ballot on Friday. He voted at the Frederick County Administration Building at 107 N. Kent St. in Winchester. He described the process as “very easy” and said he didn’t have to wait in line. As a member of the Army who is going overseas in a few weeks, Cochran said he appreciated the opportunity to vote early.

This marks the second year in which voters in the commonwealth have been allowed to vote early without needing a reason to do so, per legislation passed by the General Assembly that went into effect last year.

Cochran said he voted for the Republican candidates in the statewide races, including Glenn Youngkin for governor, Winsome Sears for lieutenant governor and Jason Miyares for attorney general.

“I think right now we just need to get everybody in Virginia back to work,” Cochran said. “And Glenn Youngkin is a proven job creator. He was very successful in the private sector. And I think that he can get Virginia back to work and make Virginia the number one state for business again.”

Red Bud District resident Kay Dawson, who was campaigning for Republican candidates outside the County Administration Building on Friday, said she opposes vaccine mandates and recent changes to the voting process, such as no longer requiring a photo ID.

“If we don’t get Virginia back, I just think it’s to the point where people are going to move out of this state,” Dawson said.

But Frederick County voters Charles and Patricia Wince said they voted for all Democratic candidates — including Terry McAullife for governor, Hala Ayala for lieutenant governor and Mark Herring for attorney general.

“Just generally, there’s not much in the Republican agenda that we agree with,” Charles Wince said.

Patricia Wince said she thinks the Democratic candidates were better than Republicans at getting people to wear masks and getting vaccinated to stop the spread of COVID-19.

He accused the Republican party of spreading COVID-19 disinformation and endangering lives.

“People are dying for people lying,” Taylor said. “It’s all of Americans’ job to get vaccinated to protect other Americans.”

“We vote for the American candidates,” Trent said. “People who want to keep America the way it was designed in the Constitution and not turn the country into a communist dictatorship.”

Cote said the issues that matter to her are keeping Virginia a "right to work" state and “school choice.” Trent agreed, saying that he would like vouchers to be given to parents who choose not to send their children to public school so that they could instead send their children elsewhere.

“The public monies that are used to finance the public schools should be made available to the parents to pay tuition to private schools,” Trent said.

Deetzie Bayliss of Frederick County, who is running as a Democratic candidate for the 29th District seat in the House of Delegates, voted early Friday and put up campaign signs near the entrance of the County Administration Building. She said early voting is “convenient” and that it “gives everyone the opportunity to engage.”

Bayliss said she feels good about her campaign, saying she has made many connections and has “great hope in the voters.” However, she fears that if Republicans retake the state government, voting restriction laws will be put in place.

“There are so many issues that are important,” Bayliss said. “Climate change is important. We have to make sure that the Virginia Clean Economy Act is not rescinded if Republicans take control. There’s so many issues — a woman’s right to choose, minimum wage. We want to make sure that people can work 40 hours a week and have decent health insurance and be able to put food on the table, you know, and a decent place to live. Those are important issues that are before us right now.”

He added that the upcoming election is a “great opportunity” to win back a Republican majority in the Virginia General Assembly’s House of Delegates. He said the party’s main focus in Richmond has been to get back to normalcy amid the COVID-19 pandemic and keep businesses and schools open as much as possible.

“There’s a lot of good momentum right now in the state, very excited for that. We look forward to winning here in November,” he said.

According to the local voter registrars, 72 people voted in Winchester on Friday, 43 in Clarke County and 136 in Frederick County.

Where to vote early in-person

Frederick County: Early in-person voting will be held at the County Administration Building, 107 N. Kent St., Winchester, from 8:30 a.m. to 6 p.m. Monday through Friday, except for federal and state holidays. Voting will also take place the two Saturdays before Election Day — Oct. 23 and Oct. 30 — from 9 a.m. to 5 p.m.

Voting by mail: Any registered voter may request an absentee ballot, which will start being mailed out Friday. The deadline to request a ballot by mail is Oct. 22. Requests should be sent to your local elections office. The mail-in ballot application is available online at www.elections.virginia.gov/casting-a-ballot/absentee-voting. Completed ballots should be mailed to your local elections office or deposited in a secure drop box (ballots must be returned in the locality in which the person is registered to vote). Before Election Day, drop boxes will be available at all early voting sites. On Election Day, drop boxes will be available at each polling location. Ballots will be accepted in-person until 7 p.m. Nov. 2. Ballots mailed to elections offices will be accepted until noon the Friday after Election Day as long as they are postmarked by Nov. 2.

Candidates on the ballot

Commissioner of the Revenue

Board of Supervisors/Red Bud District

Town Council (vote for not more than two)

Virginia Governor Candidate Princess Blanding is the ONLY candidate fighting for the people. Candidate Blanding is not running under the "Libertarian Party" she is running under the newly formed "Liberation Party" please make this correction as to not confuse people, this is false information. She is a fearless advocate for the working class, for Black people, for LGBTQIA+ rights. She states that she believes that Liberation is a human right and not a privilege.

I would like to know why my comments are not being published. If there are biased filters I will just screenshot and share on social media and let people know what you all are doing. Like really ??

Well, it didn't take long for the rock dwellers to crawl out.

Let the steal begin! It's the only way Democrats can win. Their policies hurt people.

So you agree ...Virginia will stay Blue and away from the treasonous tRump cultist youngins

How does early voting enable fraud?