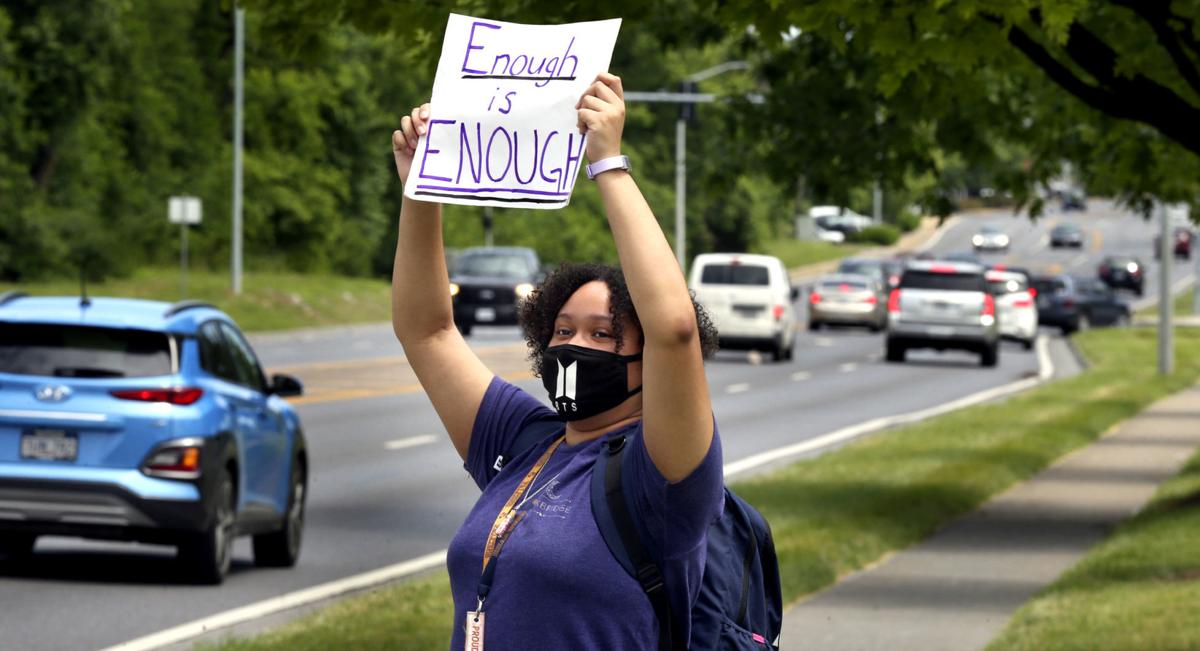 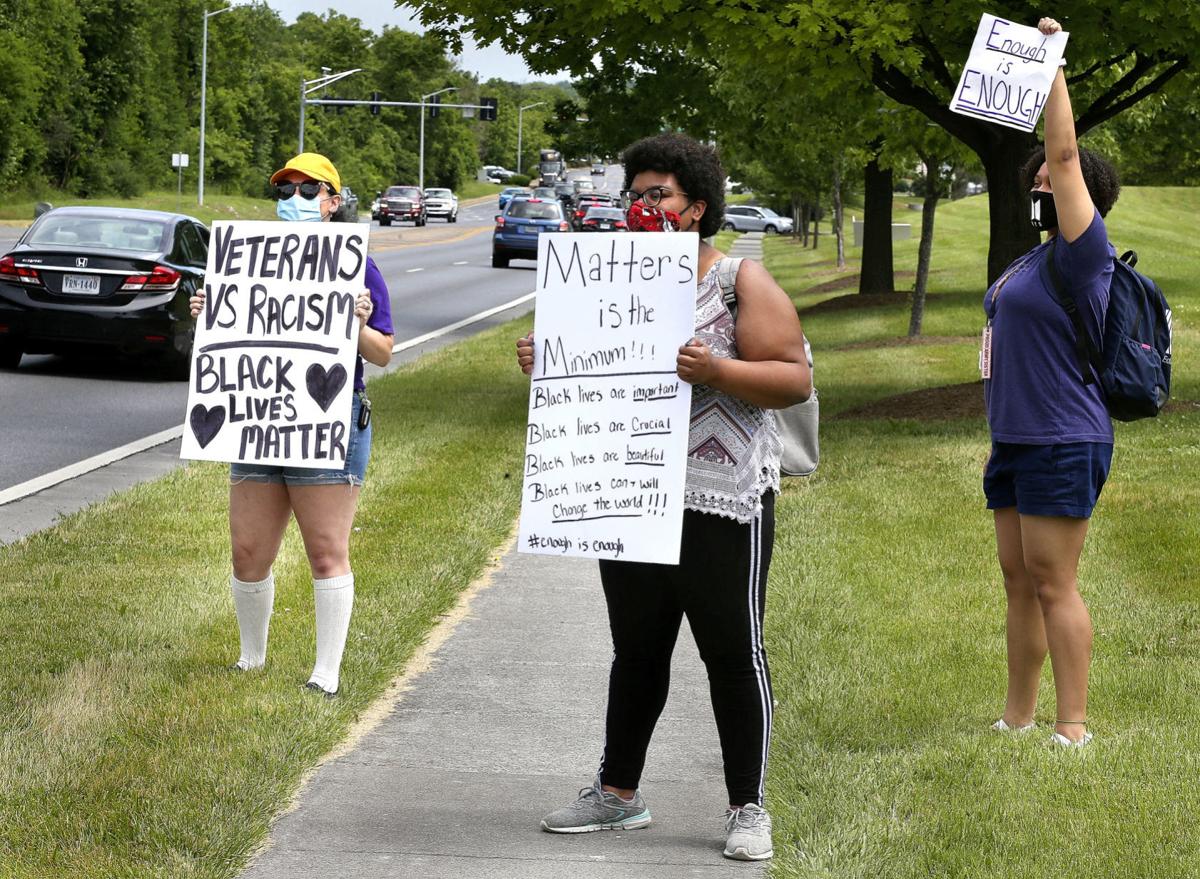 The protest, held on the sidewalk near the entrance to Walmart, was organized by Shenandoah University graduates Danee Simmons and Whitney Woodall, both of whom say there is a need for criminal justice reform.

“I think it’s important for people to know I’m not anti-police, I’m anti-police brutality,” said Simmons, who studied criminal justice for the past four years. “There’s a lot of people, mainly people of color, in jail for drug offenses and nonviolent offenses that shouldn’t be there. Our court system needs to be reformed. I took a race and crime class this past semester before I graduated and found out that people of color get harsher sentences than people who are not of color when they commit the exact same crime. And things like that need to not happen.”

Tuesday’s protest was one of countless that have been held in the wake of the May 25 police killing of George Floyd, a 46-year-old black man who died while a white officer kneeled on his neck for nearly nine minutes in Minneapolis.

Simmons said she would like police and court officials to have extensive amounts of sensitivity training. She also believes a four-year degree in criminal justice should be required for law enforcement officers.

She also thinks police shouldn’t be called for minor disturbances and that more money should be allocated for education.

“I think education is the solution to everything,” Simmons said. “I think more people need access to education. I think police shouldn’t have to be social workers. I don’t think that they should be in schools. There’s a lot of good reasons why we have police, and they need to focus on the reasons they were put there in the first place.”

SU graduate Clelia Wilson said that “enough is enough” when it comes to police violence against people of color. She said people need to take time to think about how they have allowed stereotypes to cloud their judgement.

“I think what we should all just do is take a moment to self-reflect,” Wilson said. “I’ll even say personally I had some prejudiced thoughts against my own people. Both among African Americans and even the Latinx community, because I’m also half-Latina. So I had to reflect on myself and see where my biases stemmed from, which I thought were mostly just from my upbringing of where I lived and also the media. I had to take a moment to step back, look at where all of that came from and be like, this isn’t the way we should think. We are all people. We shouldn’t have such negative thoughts or even assumptions about other people without getting to know them.”

Hannah Hale, who is studying English education at Shenandoah University and hopes to become a high school teacher, said she can’t stand the thought of students being afraid for their lives over racism or police brutality.

“We don’t talk about it,” Hale said about racism. “That’s the issue. It’s so much easier for us to smile and nod and say everything is OK. I think it’s time we start having these difficult conversations.”

Florida resident Justin Fowler, who frequently visits the area, said there needs to be more accountability in law enforcement. He and Winchester resident Nathalie Lupien were driving by Walmart when they noticed that only a few people were participating in the protest. Believing the cause to be too important, they went to Walmart to purchase signs and then joined the protesters.

“I’m just starting to open my eyes and really learn more about how bad things are and how much racism there is in the world and how much violence there is against the black community,” Lupien said. “It’s very terrifying and extremely sad to know this is still going on. A lot of people are blind to this.”

Winchester resident Steve Swim, who joined the protesters, said he hopes Congress passes the Justice in Policing Act of 2020, which was co-sponsored by Rep. Jennifer Wexton, D-10th. The bill aims to reform policing in communities across the country by establishing a national standard for law enforcement accreditation, mandating data collection on police use of force, reprogramming existing funds to invest in community-based policing efforts and streamlining federal law to prosecute excessive use of force and establishing independent prosecutors for police investigations.

Although the protest started out at noon with only three people, more people joined throughout the afternoon. They held signs that said “I can’t breathe” and “Black Lives Matter.” Most drivers passing by either honked their horns or gave a fist pump in support. A few, however, yelled expletives and insults.

Simmons said she hopes the Black Lives Matter movement and the demand for criminal justice reform does not lose momentum and that people contact their legislators demanding change.

“The moment the movement loses steam is the moment it is forgotten until another person dies or another person’s life is completely destroyed,” said Wright, who also joined the protesters. “We need to end that.”

Now that the protests are fizzling out, what's next on the left's agenda? We've had a fake impeachment, man-made Covid, which brought the economy to its knees. Floyd's death which by the way, everyone agreed that he should not have been killed yet these "protests" continue. It's never been about Floyd with the looting and burning down businesses along with destroying statues. I think we are now back to Covid on the rise again to once again cripples the economy. Only a fool can't see what's really going on.

Actually, it was a real impeachment. He's impeached for life. "man made" virus..Who made it, the democrats? It's killed a few people, but ok. Perhaps the protests "continue" because of posts like yours....you really don't get what systemic racism is, do you? And the fact that covid is spiking in some places is because of people like you who don't think it's real. So do tell us "fools" what's going on here.

You fall into the category of my last sentence.

Jas, for you to think that Covid and the protests are all some sort of a plot by "the left" says a LOT more about you than it does about anything true or real. As for being a fool......[whistling]

You too fall into the category of my last sentence.

@Jasba64 - The irony of them thinking of themselves as "open minded" and "accepting" is beyond the ability of mortal cognition. They are what they think they are fighting against...

True open minded people don't paint broad denials of irrefutable information just because they don't agree with the messenger. They would take the time to verify what is presented. Sadly, if it doesn't agree with what they want it to agree with, they attack the messenger. I call it laziness.