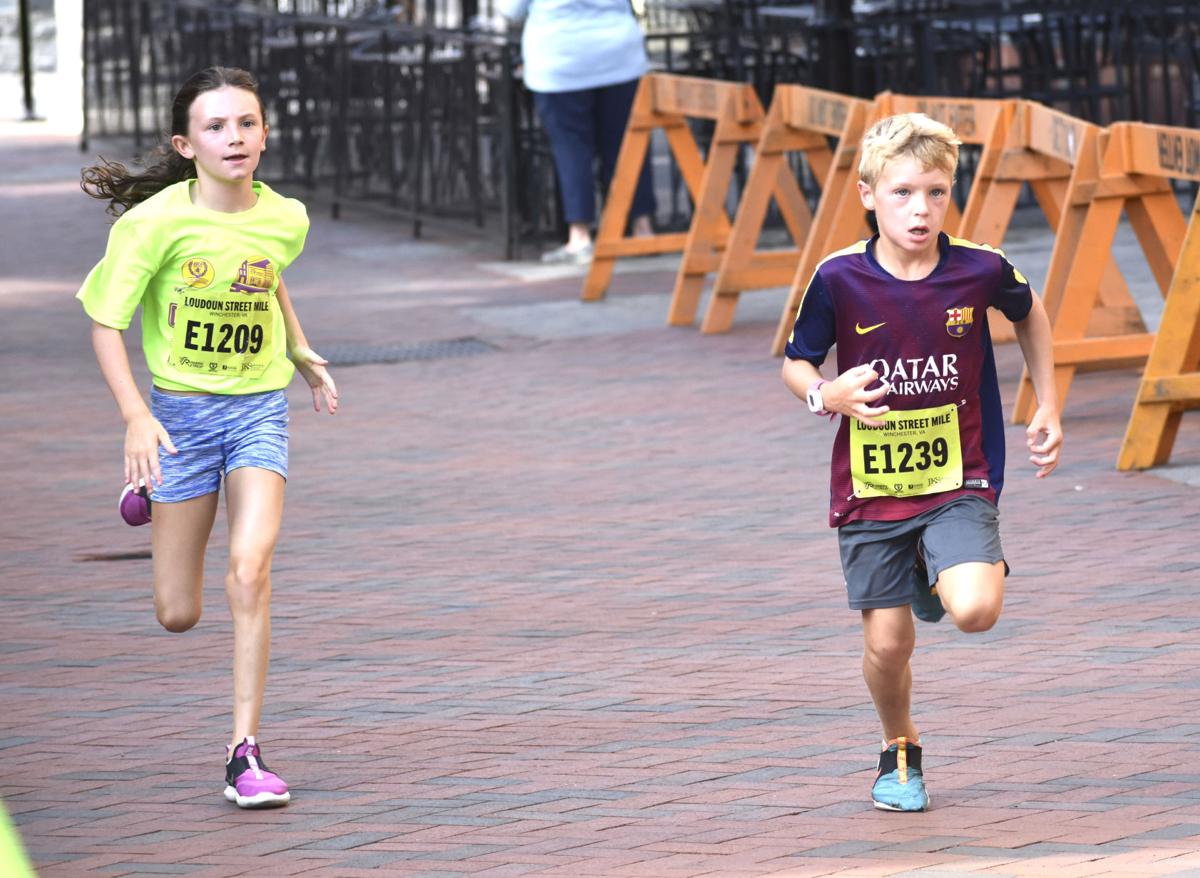 Virginia Beckett, 8, of Boyce and Jaxson Yoder, 7, of Winchester participate in the 33rd annual Loudoun Street Mile on Saturday in Winchester. More than 200 people competed in the event, which was postponed from its traditional Memorial Day date because of COVID-19. 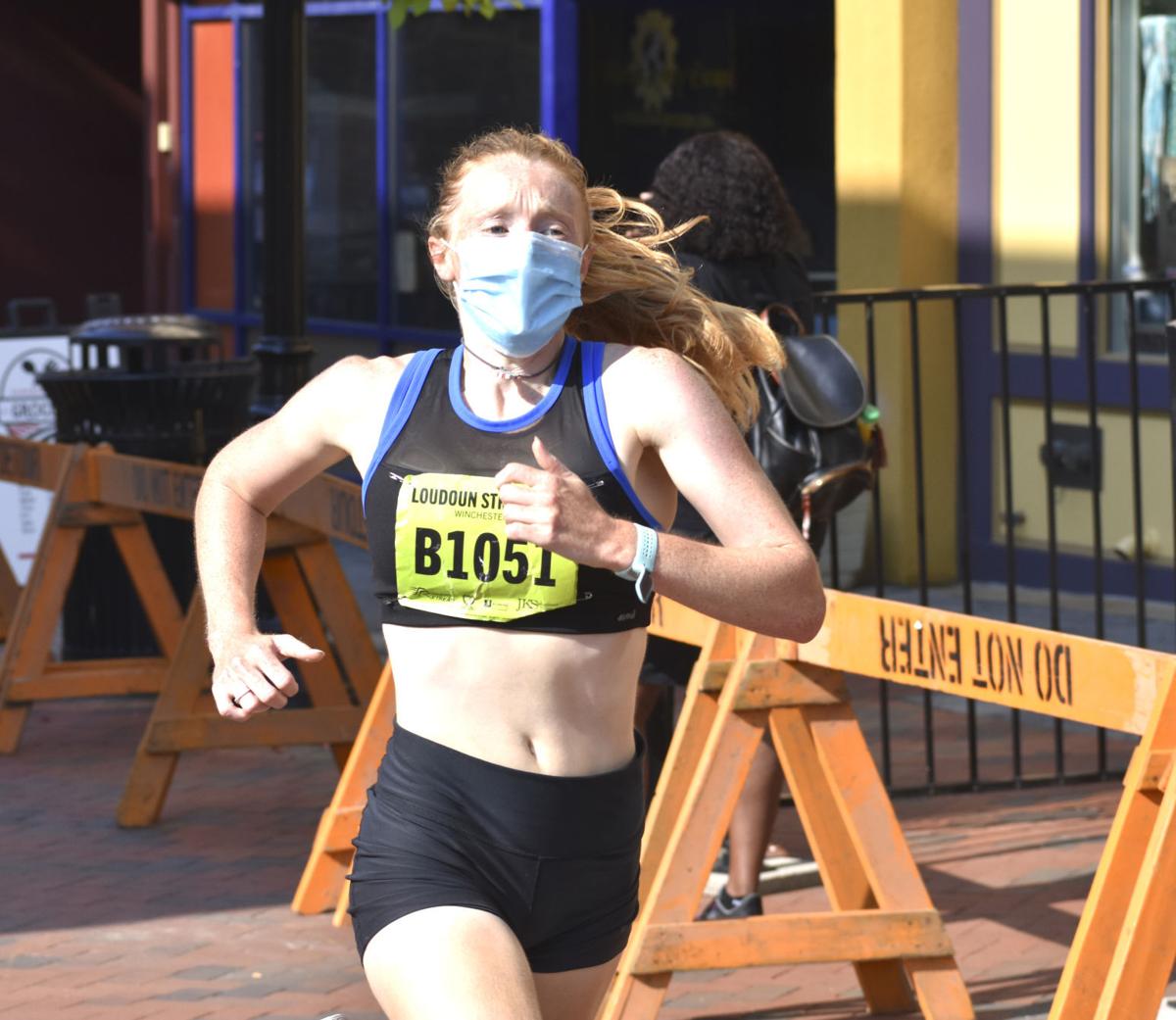 Former West Virginia University All-American Amy Cashin defended her women’s title at the Loudoun Street Mile on Saturday. The 25-year-old recorded a time of 4 minutes, 48.5 seconds to win by 6.3 seconds. 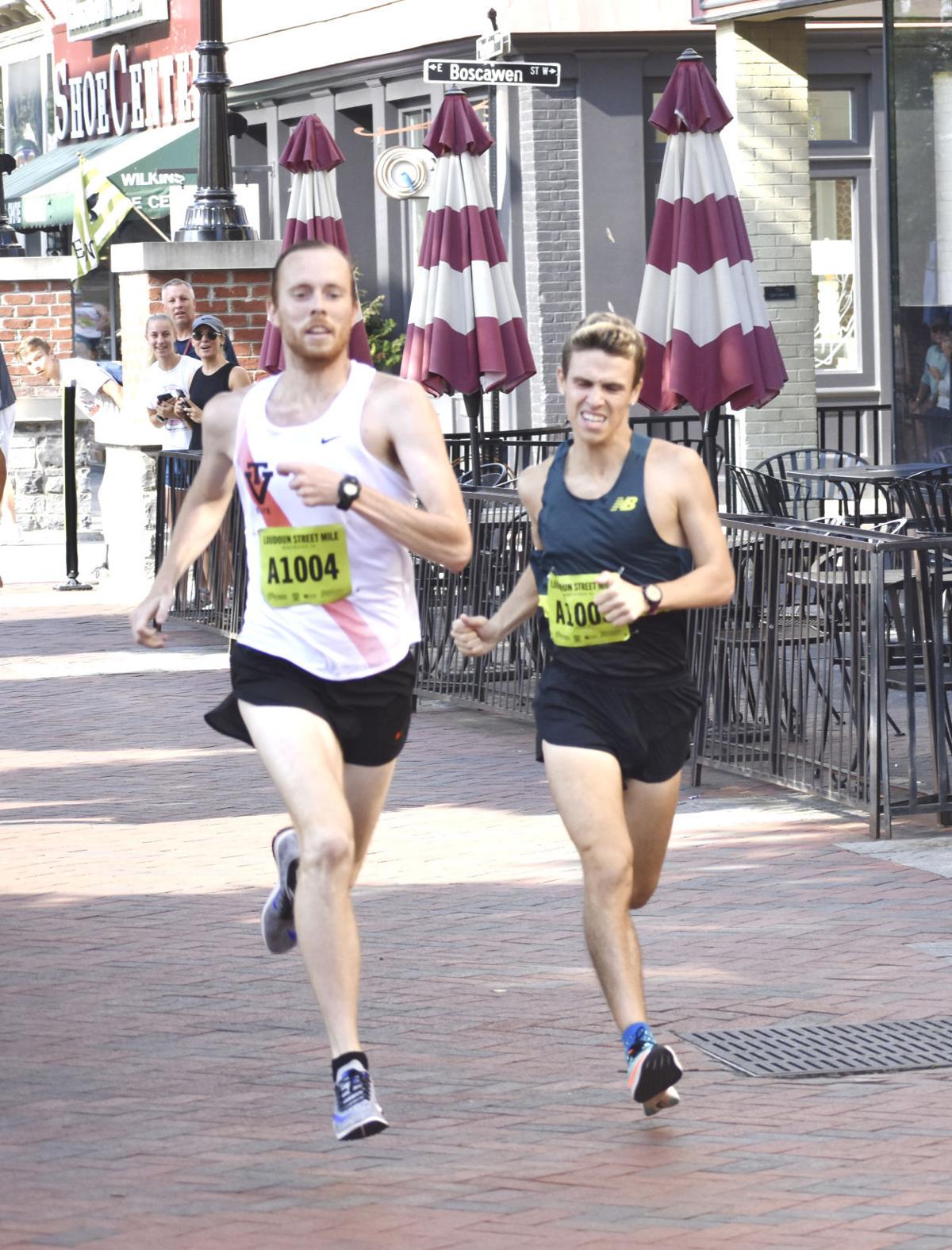 Virginia Beckett, 8, of Boyce and Jaxson Yoder, 7, of Winchester participate in the 33rd annual Loudoun Street Mile on Saturday in Winchester. More than 200 people competed in the event, which was postponed from its traditional Memorial Day date because of COVID-19.

Former West Virginia University All-American Amy Cashin defended her women’s title at the Loudoun Street Mile on Saturday. The 25-year-old recorded a time of 4 minutes, 48.5 seconds to win by 6.3 seconds.

WINCHESTER — The phrase was uttered repeatedly as people made their way past meet director Mark Stickley on the walking mall at the conclusion of Saturday’s 33rd annual Loudoun Street Mile.

“Thanks for doing this.”

Stickley’s pre-race assessment that people were hungry for an organized road race again was correct.

There were more than 200 participants (247 people registered) in the Loudoun Street Mile, which also featured an untimed one-mile walk and a 100-yard tot trot.

Former Virginia Tech All-American Daniel Jaskowak, 26, won on the men’s side in a fight to the finish with Matt Lange, 24, of Arlington. (Jaskowak won a by a tenth of a second in 4 minutes, 14.1 seconds). Former West Virginia University All-American Amy Cashin, 25, repeated as champion on the women’s side (4:48.5 to win by 6.3 seconds).

Like practically everyone else on Saturday who has watched running event after running event canceled since COVID-19 was declared a global pandemic on March 11 — the Loudoun Street Mile was a Memorial Day staple until this year when it was postponed — Cashin was just happy to be competing.

Cashin earned All-American honors in both the mile and the 3,000-meter steeplechase in 2018 at WVU. The native of Melbourne, Australia, and Olympic steeplechase hopeful hadn’t been able to participate in a race since February in an indoor 3K in Boston because of COVID-19.

“What this pandemic has really done for me is it’s reminded me of why I love to run,” said Cashin, who is still a student at WVU and is about to work toward a PhD after getting her master’s degree. “What was important today was to really embrace the opportunity that I had to race, because I know they’re few right now. The thought was to enjoy the process and realize I’m privileged enough to have this opportunity.”

Cashin — who wore a mask for much of the race — said one of the reasons why she wanted to do the Loudoun Street Mile was because she heard Stickley was making an effort at social distancing.

Starting at 9 a.m., Stickley sent runners off every 10 minutes in five waves (the first three had about 40-45 in each, the last two had 35-40.) Stickley used a grid pattern to prevent each wave from bunching together at the starting line, which is near Blue Ridge Electric. The top males were in the first wave, the top females in the second, the next fastest males and females went third, and the rest of the field was grouped randomly.

Stickley put “X”s on the street to keep people six feet from each other in every direction at the start, with no more than six people in a row. Since there was a mat at the start line that synced up with timing chips, everyone was guaranteed an accurate time no matter how far back they started. Based on entry time, the best runners were placed at the front so they could all be equal in status in pursuit of crossing the finish line first once the start gun was fired.

Some people chose to wear masks, but they were not required because of the breathing discomfort they can create while running. Once the race was over, everyone was encouraged to go home as quickly as possible. Stickley canceled the awards ceremony this year to help with that process. Awards and prize money will be mailed or available for pickup next week.

An awards ceremony wasn’t required to enjoy yourself on Saturday, though.

“It’s fun to get out here and do this kind of stuff,” said Willie Yoder, 11, of Winchester.

The son of Shenandoah University football head coach Scott Yoder, Willie is the oldest of three Yoder boys who participated on Saturday. Willie won the 10-11 boys’ age group in 6:03.2, Chase, 9, was third in the 8-9 division (6:50) and Jaxson, 7, was second in the Under-8 division.

A rising seventh-grader, Willie plays football, basketball and soccer. He also ran cross country for the Powhatan School last year, and said it felt good to beat his previous best mile time of 6:06.

Scott Yoder was pleased to have a competitive outlet for his boys on Saturday.

“It’s been such a different spring and summer, and this was something to look forward to,” Scott said. “We’re just glad to be out here and see a bunch of our friends, and get to do something with the Winchester community.”

Though White hadn’t run an actual race since the high school indoor track season ended, Saturday helped show him that his training is paying off as he waits to find out when he’ll get to compete again for the Colonels (the Virginia High School League will vote on a sports model for the 2020-21 school year today). White’s top 1,600-meter time is 4:49, and a mile is longer than that at 1,609.3 meters.

“It felt really good [to be out here],” White said. “We’ve been training through quarantine and probably went harder than we would in the normal season because we had more time [with school canceled]. I think we’re in better shape than we would have been had we actually had a track season.”

Jaskowak made the most of his first appearance at the Loudoun Street Mile.

A native of Grove City, Pa., and graduate student at Virginia Tech, Jaskowak earned All-American honors at the 2017 NCAA Indoor Championships, running the 1,200-meter leg on a Hokies’ team that placed second. Since his Tech career ended in 2018, Jaskowak has been trying to qualify for the Olympic trials in the marathon (he took second in 2 hours, 20 minutes, and 54 seconds at the Richmond Marathon in November). As much as he likes longer distances, he enjoys the mile — his personal-record is 4:03.

On Saturday, he needed to show off some closing speed. Jaskowak was in the lead as he entered the brick area of the walking mall for the final 300 meters, but then two runners passed him.

“It took me a little bit, but I responded,” Jaskowak said.

Jaskowak pulled in front with 200 meters to go. The expression on Lange’s face showed just how hard Lange was straining to regain the lead, but Jaskowak stayed a couple steps ahead to win by a tenth of a second.

Saturday was Jaskowak’s first race since he competed in 10-mile race in Blacksburg in February.

“I had races like this in my schedule, but they either got rescheduled or canceled,” Jaskowak said. “When I heard about this race I was really happy that it was going on. It was a chance to get some prize money. As a poor college student, I can appreciate that.”

Cashin might not have been focusing on her time, but she was pretty intent on taking first. Cashin and last year’s third-place finisher, Gina McNamara (a 25-year-old and former University of Michigan runner) separated from the pack after 800 meters, then with 400 to go Cashin started to pull away from McNamara to beat her by six seconds.

Cashin said she hadn’t left Morgantown in four months, so she kept her mask on until it was just her and McNamara halfway through. She put her mask back on in the final 100 meters just to be cautious since there was a sizable crowd near the finish line.

“It was so fun,” Cashin said. “I got to run with some cool people. It’s always fun to catch up with people and meet new competitors.”

Stickley didn’t get the 350-400 people he was hoping for, but he said it meant a lot to hear that people were enjoying themselves.

“I thought it worked out really well,” said Stickley, who will give $2,500 to The Laurel Center in Winchester, which helps victims of domestic and sexual violence, with proceeds from the race. “This is the first event we’ve had for the Shenandoah Valley Runners Association since March 3. I wanted to do everything I can to make this race happen. We got support from the city, and the runners were cooperative.”

Full results are on runhigh.com.