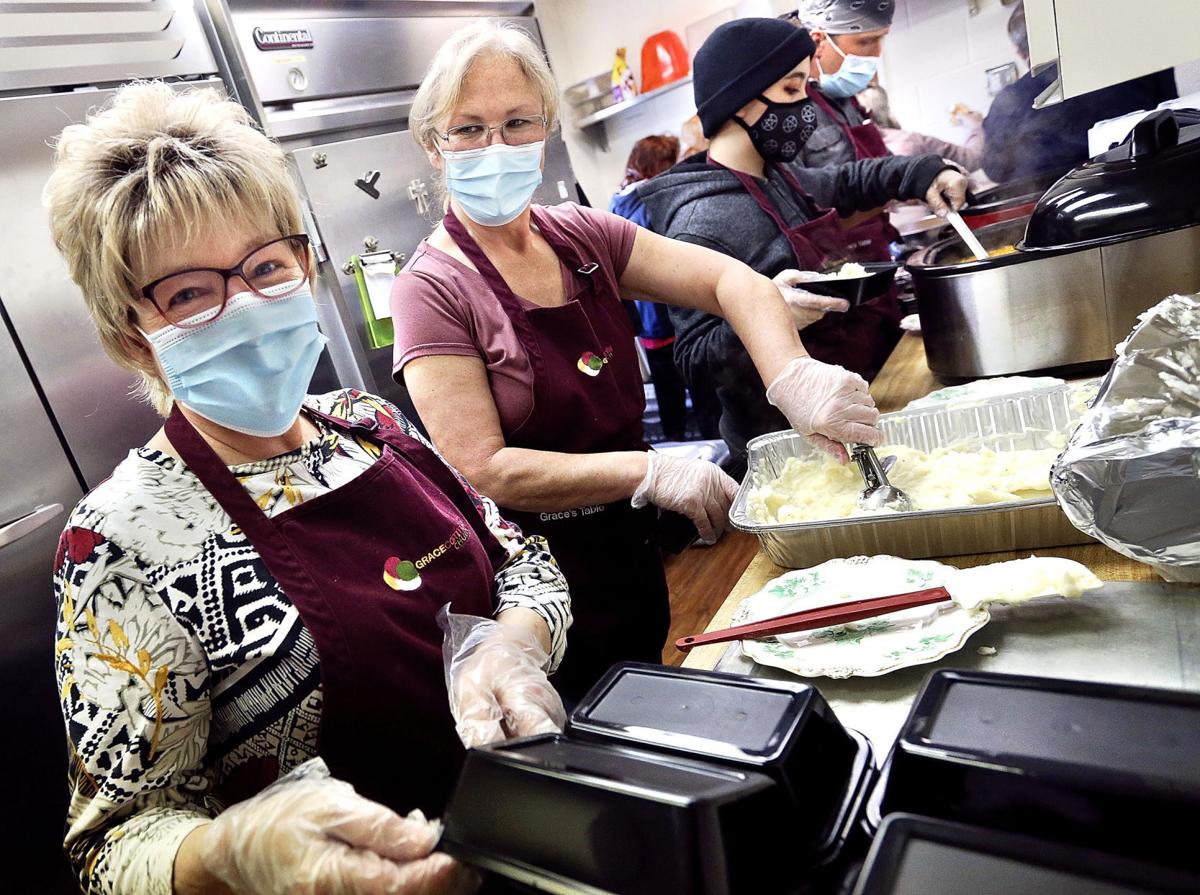 Karen Stevens (left) works with her sister, Kelly Stempor, in the kitchen of Grace Community Church in Winchester as they prepare free meals for pick-up and delivery. 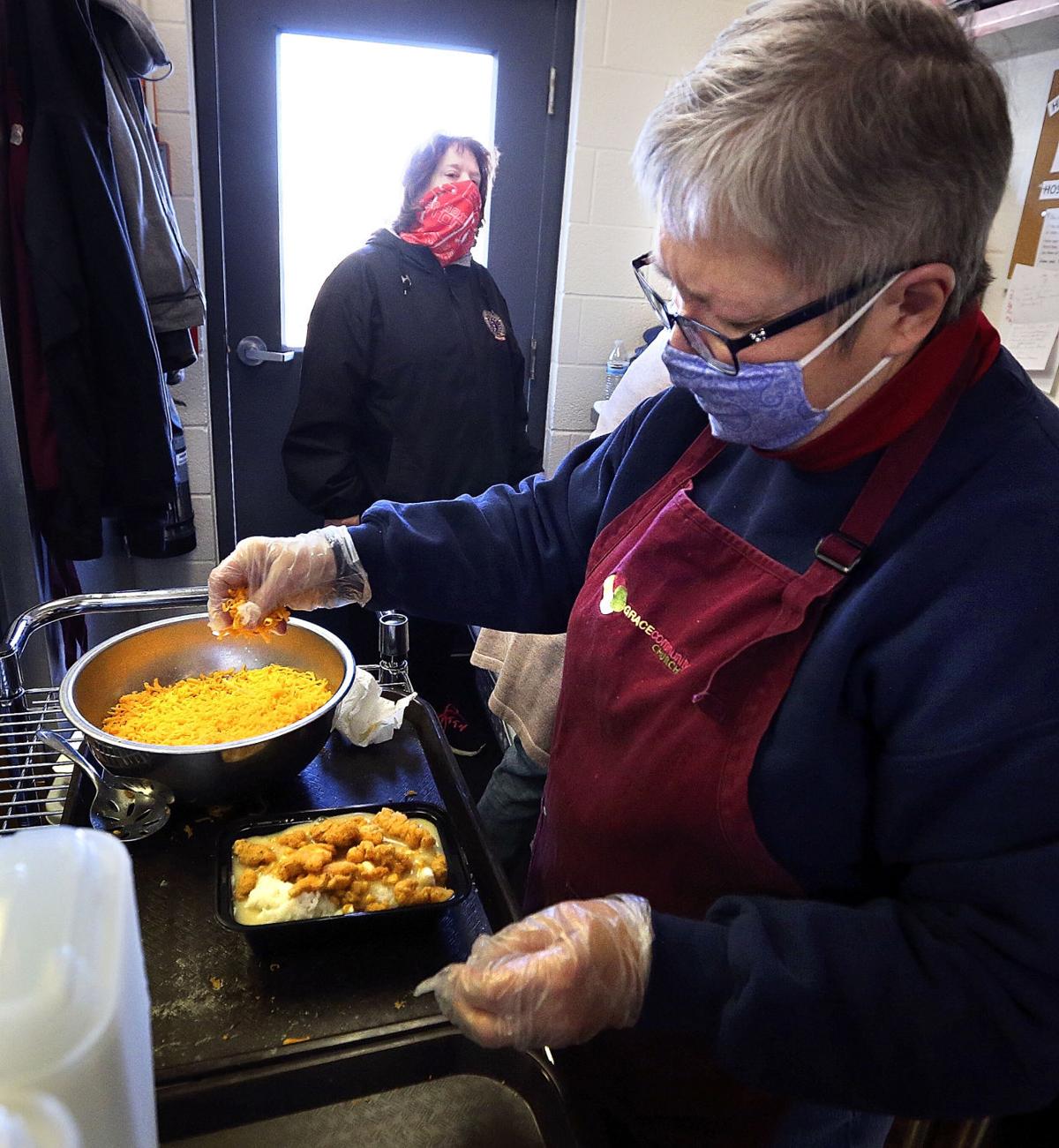 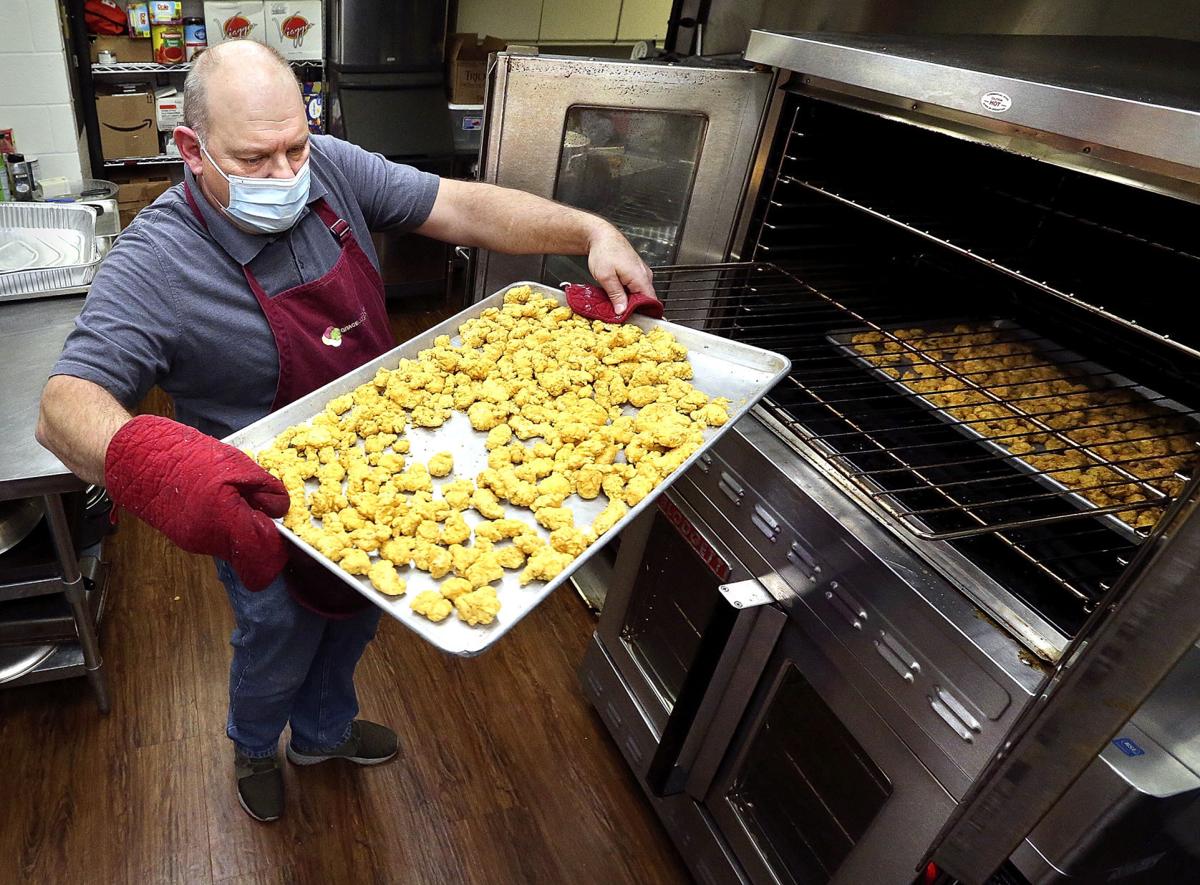 Dale Stevens prepares popcorn chicken for a mashed potato bowl that will be served and delivered to anyone who wants a meal at Grace Community Church in Winchester. 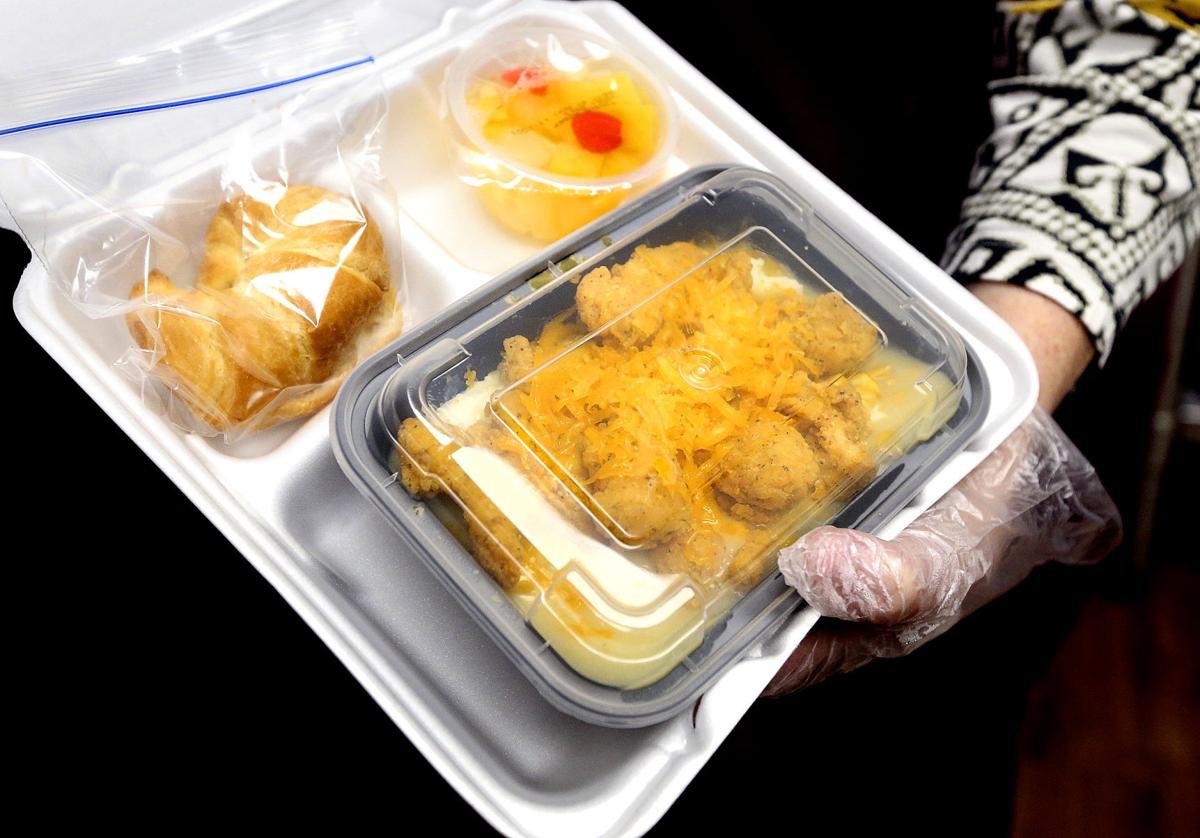 A meal prepared by volunteers at Grace Community Church in Winchester includes a mashed potato bowl with popcorn chicken, corn, gravy and cheddar cheese. It is served with a croissant and a fruit cup.

Karen Stevens (left) works with her sister, Kelly Stempor, in the kitchen of Grace Community Church in Winchester as they prepare free meals for pick-up and delivery.

Dale Stevens prepares popcorn chicken for a mashed potato bowl that will be served and delivered to anyone who wants a meal at Grace Community Church in Winchester.

A meal prepared by volunteers at Grace Community Church in Winchester includes a mashed potato bowl with popcorn chicken, corn, gravy and cheddar cheese. It is served with a croissant and a fruit cup.

WINCHESTER — Like everyone responsible for getting dinner on the table, Karen Stevens often stands in front of her pantry and fridge hoping to be inspired by the mishmash of ingredients she finds there.

Except her task is more challenging than what the average home cook faces. Stevens needs to create enough meals to feed more than 300 people. She’s been doing it every Friday night since mid-March of last year.

“I tell my husband it’s like an episode of ‘Chopped,’” Stevens said. “We have these ingredients — can we make something people will like?”

The people must like the food because they keep coming back for the free meals provided by Grace Community Church at 2333 Roosevelt Blvd. in Winchester

For nearly a full year Stevens has led a team of volunteers from Grace Community and Compass Community churches in cooking, packaging and delivering free meals. In the past year, they’ve only missed two Fridays — one was Christmas Day and the other was New Year’s Day.

Before the pandemic struck last March, the church was already preparing a free meal once a month through its Grace’s Table ministry. But when everything — businesses, daycare, schools, churches — starting shutting down, Stevens said she went to the church’s senior pastor Brad Reaves to ask if they could do it every week and not just once a month. He urged her to get going.

At the beginning, the volunteers served 50 to 75 meals each week but the total grew to 300 or more as the months passed.

The meals are given freely, no questions asked. One woman was picking up 14 meals each week. Volunteers wondered how many people she was feeding until one day they learned the 14 meals fed just two people — the woman and her husband. But it’s what they ate all week.

“I’m used to having food in my house,” Stevens said. “It breaks my heart when people don’t have enough to eat.”

People who want a meal can drive up to the side of the church between 5:30 and 6:30 p.m. each Friday. Those who are homebound, can have the meals delivered to them. Volunteers start delivering meals about 4 p.m. each Friday to single family homes, apartments and long-term-stay hotels.

“We also give 40 meals to the Salvation Army to give them a little bit of a break,” said Stevens, who works full-time as a district manager for Sheetz.

In the spirit of community, meals are often given to first responders. The more meals the volunteers can give away, the happier they are.

“This has been so inspirational to me and I don’t even go to this church,” said Rhonda Dodson, who started volunteering because she knew Stevens through her job at Sheetz.

Dorcas Sturgill said she and her husband Randy started delivering meals to about 25 households when their jobs were put on hold at the beginning of the pandemic.

Even after they returned to work, Sturgill said she continued to rush to the church on Friday afternoons.

“I began coming into the kitchen as soon as I got off work to help where needed,” she said. “Each Friday, when I finish up my shift, and another shift of helpers comes on, I still gather 10 to 12 meals and deliver them on my way back home.”

Stevens said one particular favorite is the homemade pepperoni rolls, made by her husband Dale.

“He makes them with homemade bread,” Stevens said. “People request those.”

Dale was in the kitchen a recent Friday night stirring potatoes for the night’s meal — a bowl of mashed potatoes topped with popcorn chicken, corn, gravy and cheese. The bowl was served with a croissant and a fruit cup.

“I love to feed people. That’s what I’ve always wanted to do,” said Stevens, who worked as a restaurant manager before going to Sheetz. “As long as I’m healthy enough to do it, then I’m going to continue.”

If you’re interested in helping out, Grace’s Table could use more delivery drivers. The church has also started putting together boxes of canned goods and packaged food for those in need, so food donations are welcome. Email karen@gracecommunity.com for questions about helping out or if you’d like a meal delivered.