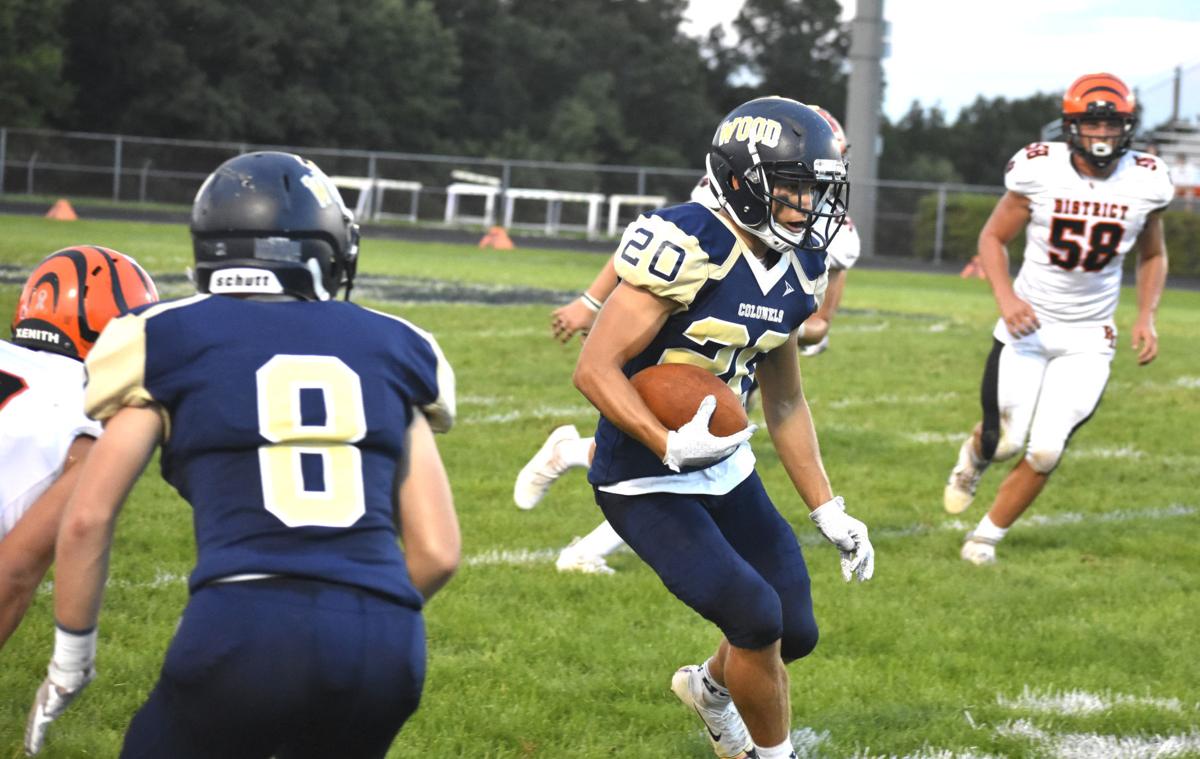 James Wood’s Ryan King looks for extra yardage after catching a short pass in the first quarter of Friday’s 37-15 win over Brentsville at Kelican Stadium. King had 154 yards receiving and rushing yards and three touchdowns. 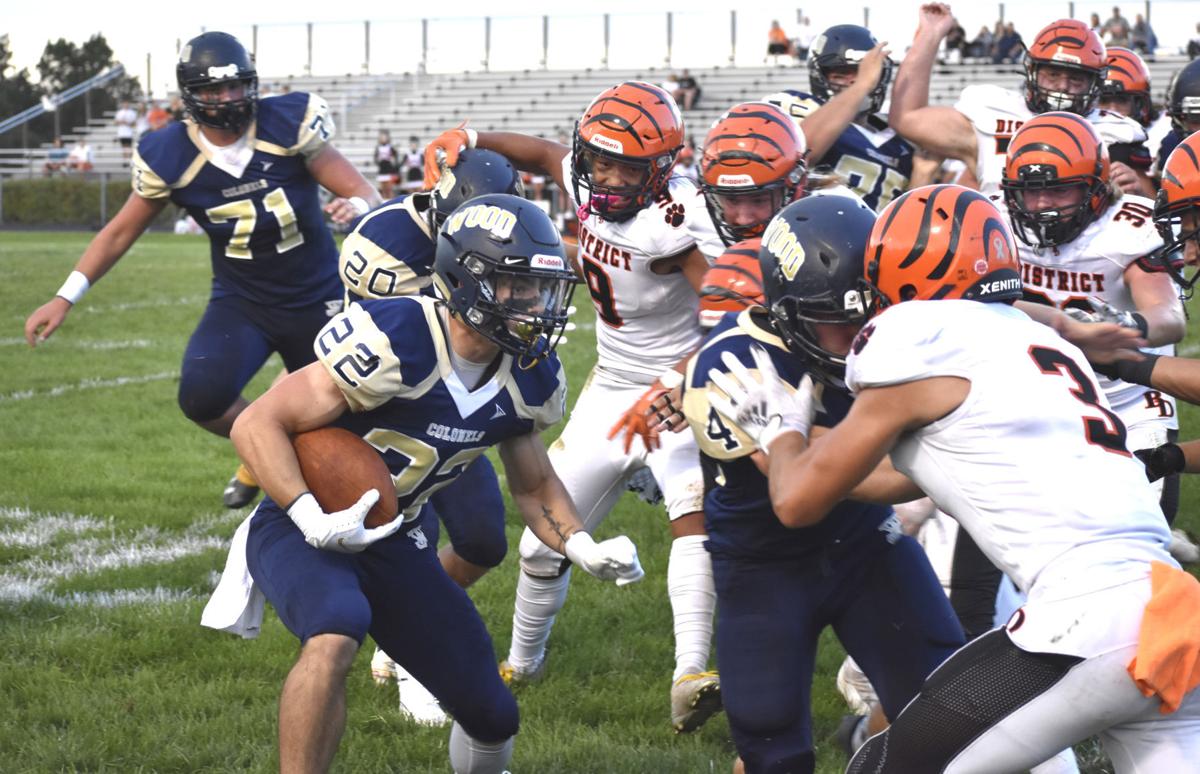 Jaden Ashby looks for running room on a rushing attempt in the first quarter of Friday's 37-15 James Wood football win over Brentsville at Kelican Stadium. Ashby had a 53-yard punt return TD and a 33-yard receiving touchdown.

James Wood’s Ryan King looks for extra yardage after catching a short pass in the first quarter of Friday’s 37-15 win over Brentsville at Kelican Stadium. King had 154 yards receiving and rushing yards and three touchdowns.

Jaden Ashby looks for running room on a rushing attempt in the first quarter of Friday's 37-15 James Wood football win over Brentsville at Kelican Stadium. Ashby had a 53-yard punt return TD and a 33-yard receiving touchdown.

WINCHESTER — With a defender in front of him and a defender on his back, it didn’t seem like there was any way that James Wood senior Jaden Ashby was going to haul in Jared Neal’s high pass into the end zone on the final play of the first half.

But shortly after Ashby and the two Brentsville Tigers who went up for the ball crumpled to the ground, Ashby held the ball up, and the celebration of his 33-yard touchdown reception was on.

The Colonels football team might have left Kelican Stadium feeling like it could have played better on Friday night, but James Wood sure did well in the explosive and game-changing plays department in a 37-15 non-district win over Brentsville.

The last three minutes of the first half was the most important big-play stretch of all. Brentsville (2-2) was less than 30 yards away from tying the game shortly into that time frame, but the Tigers went into halftime trailing 28-7.

A Brentsville team playing with heavy hearts as a result of the death of teammate Ryland Harris from brain cancer on Wednesday continued to fight hard over the remainder of the game. But that stretch was too much to overcome as the Tigers fell to 2-2 and the Colonels stayed perfect at 3-0.

“That was huge momentum for the second half,” said Ashby of the final three minutes. “This is a huge win. 3-0. We’ve got to keep it going. I still don’t think we’re playing 100 percent and still not playing to our full potential. But once we all click, we’re going to be a really good team.”

All five of the Colonels’ touchdowns were from 18 yards or more away from the end zone, with Ryan King (six catches for 95 yards, four rushes for 55 yards) scoring three TDs and Ashby recording two. King had a 23-yard TD reception and 18- and 37-yard TD runs, and Ashby had a 53-yard punt return TD in addition to the 33-yard receiving TD.

James Wood’s defense set up two touchdowns in the final 1:16 of the half to send the Colonels into halftime with the 28-7 lead. And in the second half, the Colonels’ Jonathon Corbin recovered a fumble at Wood’s 7 to maintain a 35-15 lead with 8:51 to play.

On a fourth-and-4 play from the James Wood 28 in the second quarter, sophomore Zach Smith had a 47-yard interception return to the Brentsville 32 to set the wheels in motion for James Wood to pull away.

The Tigers had scored a touchdown on their previous possession to make it 14-7 with the help of two 15-yard penalties against James Wood. Brentsville was on a nine-play, 46-yard drive when Smith cut in front of a receiver on a slant pass to the right from Tigers quarterback Caleb Alexander (7 of 13 for 71 yards; 13 carries for 25 yards and a TD).

“I knew I had to get in my coverage,” Smith said. “I saw he was staring [to the right], and I looked and I saw [the receiver] was open. I just ran to it and then he ended up throwing it that way.”

James Wood coach Ryan Morgan said it was a good play by Smith, and one he needed to make once he decided to commit to the ball.

“Zach, who’s a young guy, is still kind of learning. He hasn’t played a ton of inside linebacker,” Morgan said. ‘He got to his drop really well, and he saw that slant coming to him. He broke on the ball, and he’s trying to undercut it. If he missed, then it was going to be a big play for them.

“That was huge to get the momentum swung back our way, because it went from a one-score game to a three-score game pretty quick.”

Three plays later, King scored on a jet sweep around the left side after taking a handoff from Ashby with 1:16 left in the half. King showed off his nimble feet to keep himself in bounds as neared the 10. The third of five Hunter Barnhart extra points made it 21-7.

On the ensuing possession, defensive end Caleb Keefer — who came into the weekend with an area-best four sacks — was one of the players who swallowed up Alexander on fourth-and-3 from the Tiger 49 for a five-yard sack with just six seconds remaining in the half.

At that point, the easy thing to do would have been to take a knee and go into the half up by two TDs. But Neal (10 of 17 for 137 yards and two TDs) threw two perfect passes to get James Wood in the end zone.

He hit King in stride over the middle for 24 yards to the Brentsville 20. King was leveled almost as soon as he got the ball, but that was a good thing from a time perspective. It initially appeared as if first-half time had run out on the play, but the refs got together and put nine-tenths of a second on the clock.

On the next play, a holding call wiped out a highlight-reel catch from King, who leaped in the air to catch the ball at the 3, then turned on his defender and dived inside the left pylon in one motion. But after the ball was moved back to the 33, that just set the stage for Ashby to wow the crowd on Neal’s throw to the right.

“I told J-dub (Neal), ‘Give me a chance right here, I’m going to come down with it, I promise you,’” said Ashby, whose punt return TD made it 14-0. “He threw it to me and I just kind of leapt over [the defender’s] head and reeled it in.”

Neal said it’s definitely a joy to throw to Ashby and King. Just 63 seconds after the Tigers made it 28-15, Neal threw a lateral to the right to King, who received excellent blocking in front of him as he started forward, then as he neared the 30 cut all the way across the field for a 37-yard TD to essentially put Brentsville away with 10:52 left.

“They make it really easy,” said Neal, who threw a perfect 23-yard TD pass to King over the middle behind the defense to open the scoring. “I can make a 10-yard throw and they can turn it into a lot more. Having the speed [at receiver] really makes everything easier.”

Down 35-15, Alexander fumbled a shotgun snap from the Colonels’ 3 on the next possession, and James Wood closed out the scoring when the Tigers were forced to fall on a high snap into the end zone for a safety with 2:45 left.

James Wood finished with a 291-196 yard advantage. Wes Brondos added 65 yards on 18 carries. The Colonels’ had three sacks and held Brentsville to 125 yards rushing on 50 attempts, with the Tigers losing 20 yards on a safety.

James Wood players were pleased with the win, but there were mixed emotions because of Harris, who was diagnosed with brain cancer in April of 2020.

The Brentsville three-sport athlete was honored with a moment of silence before the game, and the Colonels had a large “Ryland Strong” banner at the base of the bleachers. After the game, James Wood always names an MVP for each team, and Harris’ cousin Bryce Jackson earned that award for Brentsville. Jackson had 22 carries for 55 yards, a five-yard TD run, and was active on defense.

“I think these guys handled themselves well,” White said. “I’m proud of them. They competed well.

“Bryce dedicated this game [to Harris], and he definitely ran the ball like it. He played well on defense, too. He put it all out there.”

Nico Orlando added 55 yards rushing on 12 carries for the Tigers.

Morgan felt the Colonels responded well when they had to, but he wants to see more focus from the team. James Wood committed 10 penalties for 85 yards, and he said there were too many times when players didn’t do the correct assignment on a given play.

“We have to be a better job communicating and understanding the play calls,” Morgan said. “There’s a lot of room for improvement.”