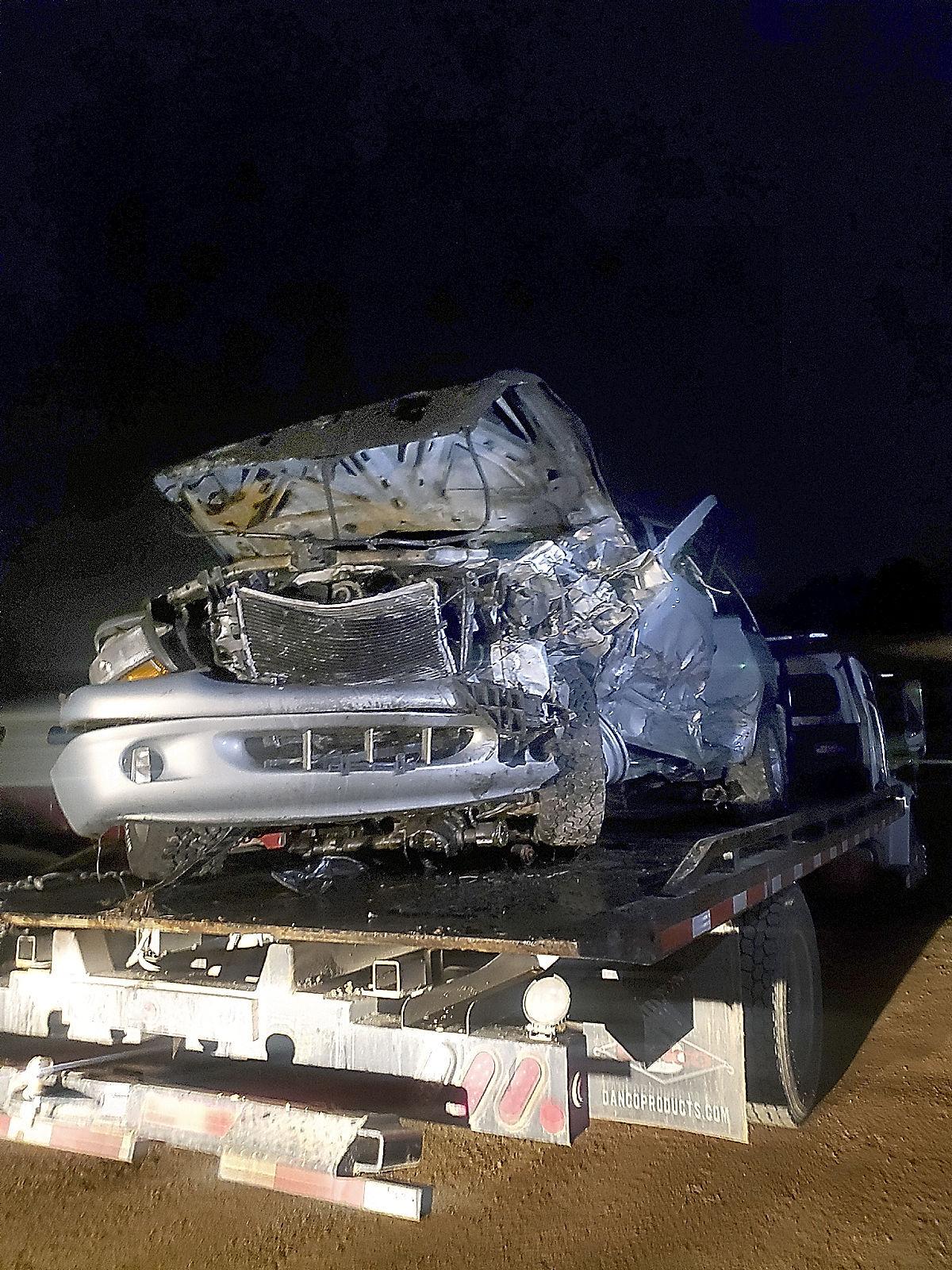 Joseph Waring's Dodge Durango is placed on the back of a tow truck after a head-on collision on Feb. 25 with a driver going the wrong way on North Frederick Pike. 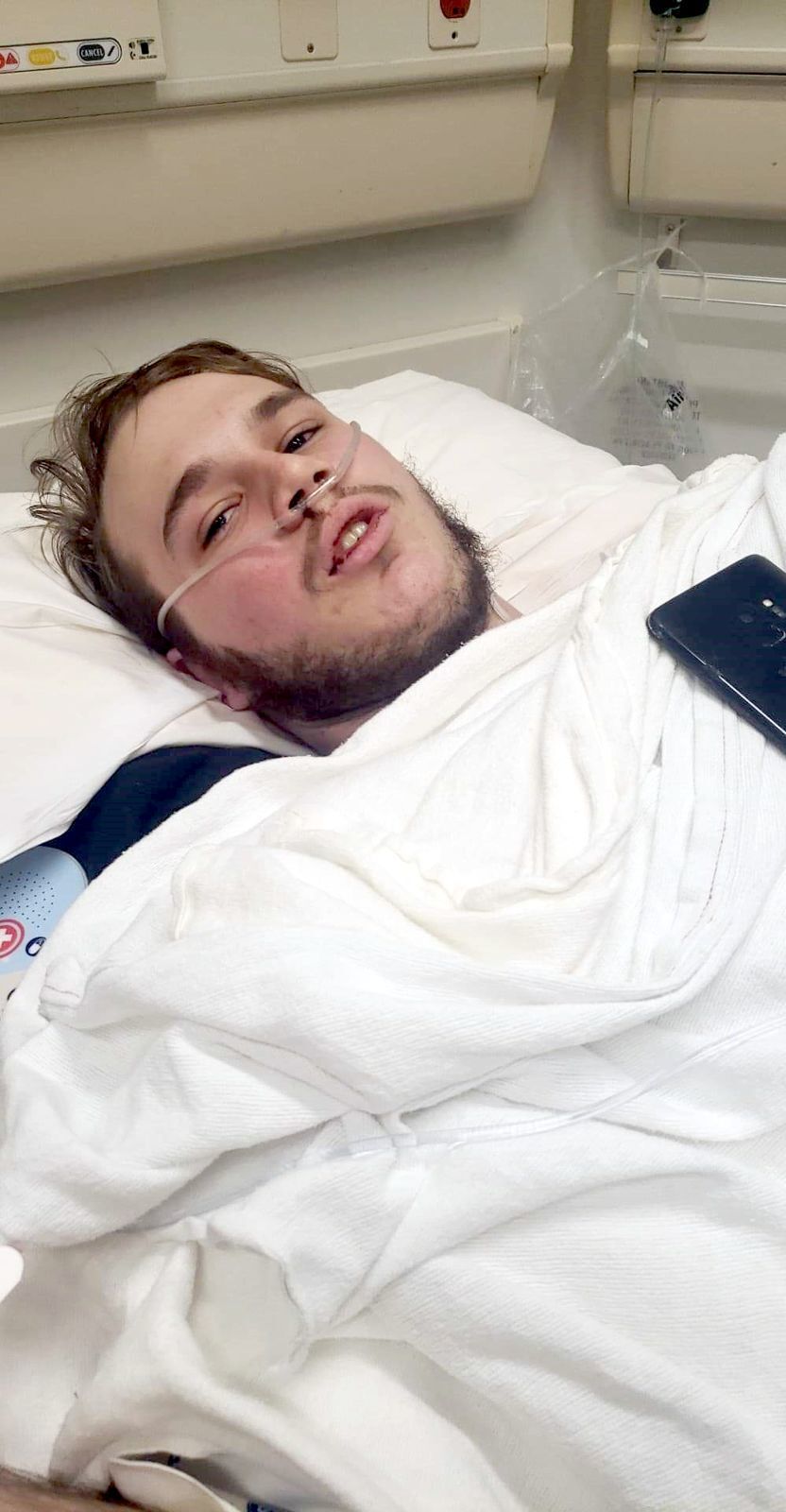 Joseph Waring's foot was severely injured in a head-on collision with a driver going the wrong way on Feb. 25 on North Frederick Pike. The driver of the other vehicle, an 84-year-old Maryland woman, was killed.

Joseph Waring's Dodge Durango is placed on the back of a tow truck after a head-on collision on Feb. 25 with a driver going the wrong way on North Frederick Pike.

Joseph Waring's foot was severely injured in a head-on collision with a driver going the wrong way on Feb. 25 on North Frederick Pike. The driver of the other vehicle, an 84-year-old Maryland woman, was killed.

The crash occurred on North Frederick Pike (U.S. 522) between Siler Road and Shane Lane just after 9:30 p.m. The area speed limit is 55 mph, which is the estimated speed both vehicles were traveling, according to Lt. Warren W. Gosnell, Frederick County Sheriff's Office spokesman and traffic division commander.

The impact killed the other driver, 84-year-old Byrle Darlene Lease, and caused Waring’s SUV to rollover and catch fire. The 19-year-old Waring, who underwent two surgeries on his severely injured left foot, was briefly knocked unconscious and flames were in the engine compartment and licking at the pedals when he awoke.

The Durango, which had been southbound, came to rest right side up, pointed north, but the driver's side door was wedged against the guard rail and Waring was unable open the passenger door. Bystander Trey Golightly used his elbow to smash the Durango's passenger side window and pull Waring to safety. Waring, who didn't get Golightly's name at the crash scene, says he's grateful for the lifesaving rescue.

Golightly said he was in bed watching television in his home in the 5000 block of North Frederick Pike when the crash occurred. Rebekah Sheeder, his girlfriend, was on the front porch and saw the wreck and called Golightly. They both ran across traffic lanes to reach the Durango, which was on fire when they arrived. Golightly, who was wearing a sweatshirt, said the passenger door wouldn't open so he struck the glass twice.

Golightly, 26, said there was no explosion, but the fire intensified after the rescue. He credits Sheeder, who is 26 weeks pregnant, for acting quickly and encouraging him to smash the glass.

"She was right there with me in her socked feet," he said. "She deserves as much credit as I do."

Police said relatives of Lease, a Cresaptown, Maryland resident, didn't know why she was in Frederick County. They said she'd had previously wandered off. Waring said Lease's relatives contacted his mother Jennifer Waring and told her that Lease had a dementia-like illness that made her wander and there had been discussions about getting her to relinquish her driver's license.

Waring is the latest local victim of an often deadly national traffic hazard: elderly wrong-way drivers. The vast majority of wrong-way crashes nationally involve drivers between 20- and 50-years-old, with many alcohol-related, according to the National Transportation Safety Board. However, a 2012 NTSB report that studied wrong-way collisions in 12 states including Virginia dating back to 1962 found elderly drivers caused a disproportionate share of the wrecks. Of 1,557 wrong-way fatal crashes on divided highways nationally between 2004-09, drivers over age 70 were responsible for about 15%.

"Right-way drivers over the age of 70 represent less than 3% of all right-way drivers involved in fatal wrong-way collisions, while wrong-way drivers over the age of 70 account for about 15% of the wrong-way drivers involved in such collisions," the report said. "Even without considering the accelerating rates of disease and pathology - and of particular concern to driving, dementia - that are evidenced in older persons, at some point, most older persons are likely to experience an impairing condition serious enough to significantly elevate their risk of accident."

The Centers for Disease Control and Prevention said there were 45 million drivers nationally 65 or older in 2018, a 60% increase since 2000. The NTSB report estimated about 20% of drivers in the U.S. will be 65 or older by 2025 and said the number of elderly drivers is rising. In 2000, 74% of people 70 or older were licensed. By 2009, it was 84%. The report referenced National Highway Traffic Safety Administration guidelines for older drivers, which include improved roadway design and medical reviews of at-risk drivers.

Of Virginia's approximately 6 million licensed drivers, about 1.2 million are 65 or older, according to Jessica Seier, a Department of Motor Vehicles spokeswoman and legislative liaison. While most drivers under 75 must renew their licenses in person every 16 years, those 75 or older must do so every five years. Seier said they must pass a vision test or present a report from an "eye care professional" saying they passed a vision test within the last 90 days.

Driving is a source of independence and convincing an older driver to give up their license can be difficult. Seier said the DMV conducts medical reviews of drivers of all ages who complaints have been made about if the complaints are deemed valid. Decisions to revoke license are based on driving ability rather than the driver's age.

The state also allows taxpayers to donate a portion of their tax refund to the Elderly and Disabled Transportation Fund. The money pays for rides for disabled or elderly people to grocery stores, jobs and medical appointments.

Waring, who was on his way home to Paw Paw, West Virginia, from his job at Advance Auto in Winchester, had bought the Durango just two days before the crash. He credits wearing his seat belt for saving his life and said doctors told him he may walk with a limp for life if his foot doesn't heal properly.

Wrong-way collisions make up a small amount of crashes, but a high percentage of them are deadly and they involve a disproportionate share of elderly, wrong-way drivers.

* About 3% of the elderly drivers in wrong-way collisions were not at fault while 15% were driving the wrong way.

* In Frederick County between 2015-20, there were 126 head-on collisions, nine involving fatalities. Two of the fatal collisions involved elderly drivers. An elderly, wrong-way driver was also responsible for last week's fatal collision in which she was killed.