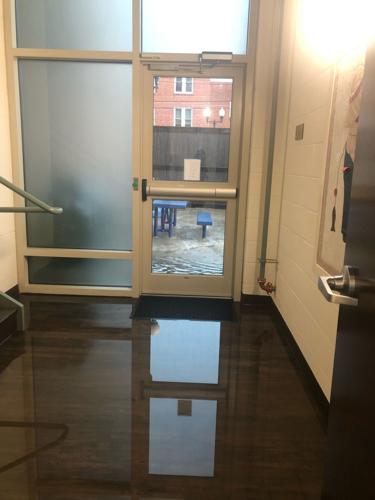 Stormwater from a heavy rain storm Wednesday afternoon made its way into an administrative hallway of The Laurel Center on North Cameron Street. 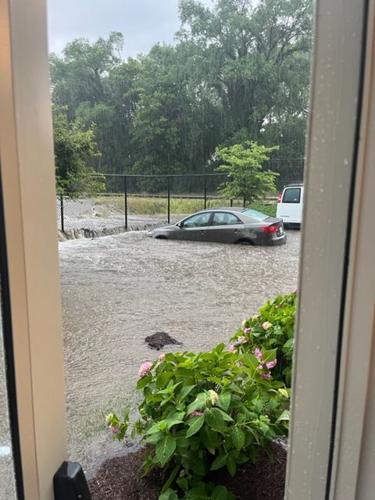 Two of The Laurel Center's transportation vehicles were submerged under floodwaters caused by a heavy storm Wednesday afternoon. 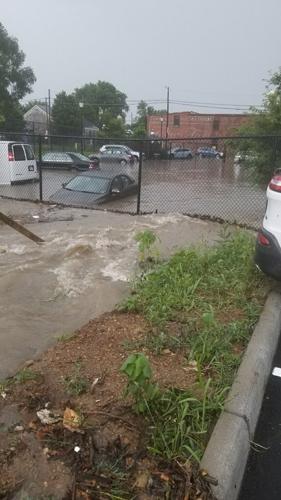 Much of The Laurel Center's parking lot was filled with stormwater from a heavy storm Wednesday afternoon.

Stormwater from a heavy rain storm Wednesday afternoon made its way into an administrative hallway of The Laurel Center on North Cameron Street.

Two of The Laurel Center's transportation vehicles were submerged under floodwaters caused by a heavy storm Wednesday afternoon.

Much of The Laurel Center's parking lot was filled with stormwater from a heavy storm Wednesday afternoon.

Power, executive director of The Laurel Center on North Cameron Street, said the storms flooded the center’s back parking lot through the north of its building, which left two center vehicles submerged in water. Stormwater also came through the center’s back doors and flooded an administrative hallway.

Much of the damage at The Laurel Center, which is a nonprofit organization that provides intervention for domestic and sexual violence, included soaked carpets and debris in parking lots and on sidewalks. There were also concerns about impact on drywall and vinyl floors in the building, condensers for heating and cooling, and a kitchen exhaust system in the center’s building next door.

“We kept the shelter open, but it really limited our shelter residents’ ingress and egress into the building,” Power said. “We ended up having to sandbag the doors where the water was coming in. They couldn’t come and go. It was really an emergency situation where we had them shelter in place.”

According to the National Weather Service, a thunderstorm with light rain was first detected in the Winchester area at 12:35 p.m. Wednesday, and about a half-inch of rain fell between 2:35 and 2:55 p.m. Heavy rain of about an inch fell in the area around 4:35 p.m., NWS data showed. About 2.5 inches of rain fell between 12:30 p.m. Wednesday and midnight Thursday, the data showed.

Engineer Kelly Henshaw, who oversees stormwater regulations and projects for the city of Winchester, said as far as she’s aware, no other store fronts or buildings outside of The Laurel Center were impacted by stormwater from Wednesday’s storm. She did say, however, that there were many areas where water was over sidewalks throughout that area.

“It was a lot of water. There was a lot of rain that came down (Wednesday),” she said. “We were seeing some disruptions that are not typical during one of our usual rainstorms, although unfortunately it seems like this type of disruption is becoming more and more common.”

The section of Winchester’s downtown where The Laurel Center is located has been prone to flooding for some time.

According to previous articles in The Winchester Star, flooding in the 200, 300 and 400 blocks of North Cameron Street have caused, on numerous occasions since 2014, closures of several buildings and businesses.

Previously, Winchester Public Services Director Perry Eisenach has said the issue is that low-lying North Cameron Street collects water runoff from properties on Kern Lane, North Loudoun Street and elsewhere that are at a higher elevation. During heavy rainfalls, the runoff overwhelms the city's drainage lines along North Cameron and the excess water spills over into Winchester's sanitary sewer mains. Since the sewer lines are too narrow to handle such an influx, a mixture of stormwater and sewage spews out of utility manholes and into the basements of buildings.

Henshaw said the city has continued to be proactive in combating these flooding issues.

In the last three years, a “big upgrade” has been made to the stormwater system between Piccadilly and Clarke streets, which included up-sizing existing stormwater infrastructure there as well as upsizing the sanitary sewer to combat sewer overflows, Henshaw said.

“We’ve definitely seen the benefits of that, but we still have so much stormwater that is coming further north on Cameron Street, north on Kent Street and from the whole north end really and none of it is controlled because it's such an old part of the city,” she said.

The city started to address the flooding problem in August 2019 with the North Cameron Drainage Improvement Project, a multi-year, $5-$6 million initiative. However, it’s been noted that the issue cannot be alleviated without stormwater retention ponds.

Earlier this year, the purchase of three small parcels of vacant, undeveloped land previously owned by CSX Railroad in the North Cameron corridor by the city was approved.

Henshaw said that $14 million project should be out for bid by January 2023 and construction could start next summer.

Earlier this month, City Council unanimously agreed to forward a proposal that would create a stormwater utility in Winchester. The utility’s sole purpose would be to collect money to address stormwater drainage issues.

Henshaw said the utility would also allow for a dedicated crew that would work during storms to keep infrastructure clear and up and running.

In the meantime, folks like Power will continue to take the risk of large storms creating a flooding situation near their offices.

Power said she believes the city is working on fixing the issues.

“I think our hope was that the stormwater remediation that the city did a little over a year ago was going to resolve issues like this. I think, to a certain extent, it did. My understanding was that this storm just overwhelmed the stormwater management system that’s in place here,” Power said. “The city is working to help us. They know there’s a problem and I know they’ll work with us on solutions.”

Until the issues are fixed, Henshaw suggested people in that area of downtown continue to do their best to plan accordingly and stay safe.

“In the moment it’s really difficult to deal with,” she said. “It’s one of those things where when you see a flash flood warning issued, especially if you live in an area where you know is prone to localized flooding, take it seriously.”

That is the way our Local council and Government roll in Winchester.

Why would they put a million dollar building there to begin with? It is ljust a

money pit. This amount of money was wasted and should have built somewhere

else (mabe Hollywood) Extravigant. Could have bluilt for a lot less and a bigger facilaty and less adminstration cost. I would say somebody rally pocketed some money selling the City this location for a pretty price. I think it was a inside job as others are also. (Darlington Motor Inn).

WINCHESTER — The Frederick County School Board plans to name an interim superintendent by July 1, according to School Board Chairman Brandon Monk.

LEADING OFF: After no-hitter, Astros seek series W vs Yanks

Padraig Harrington powers to 5-shot lead in US Senior Open