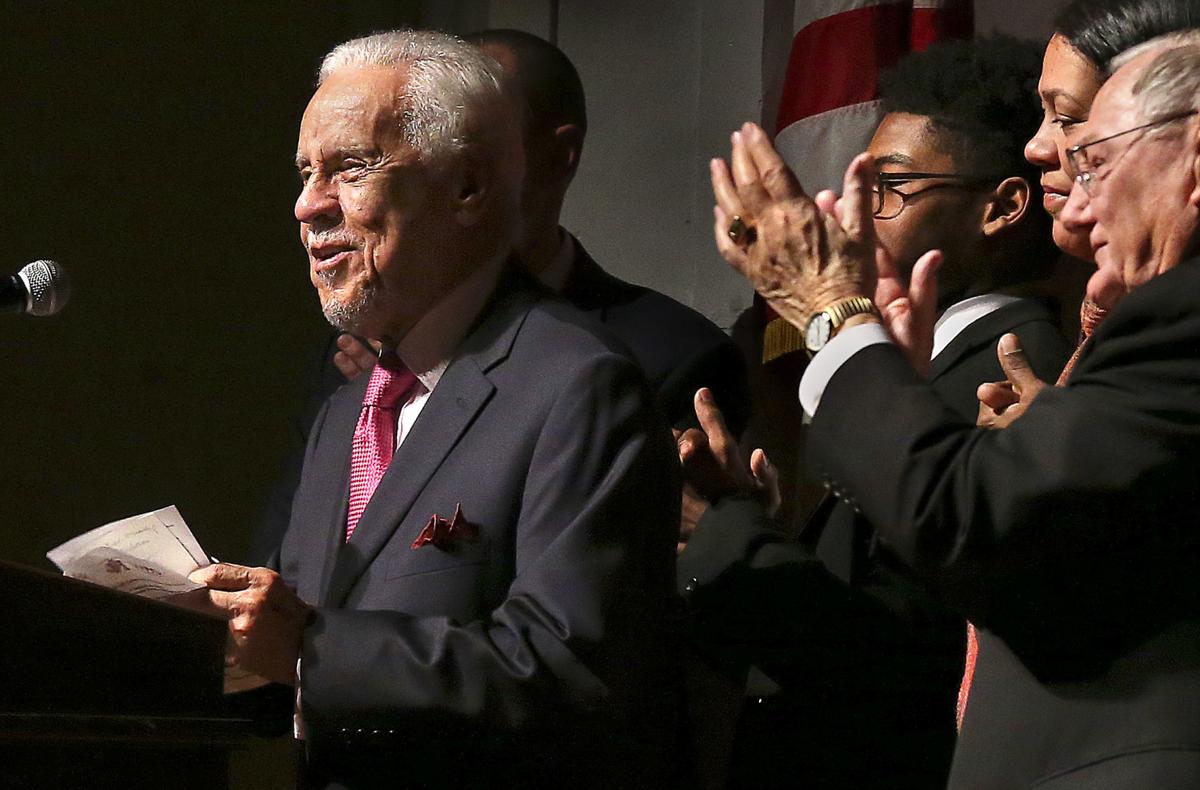 Former Virginia Gov. L. Douglas Wilder is welcomed to Handley High School on Tuesday, where he gave the keynote speech for a Black History Month program. 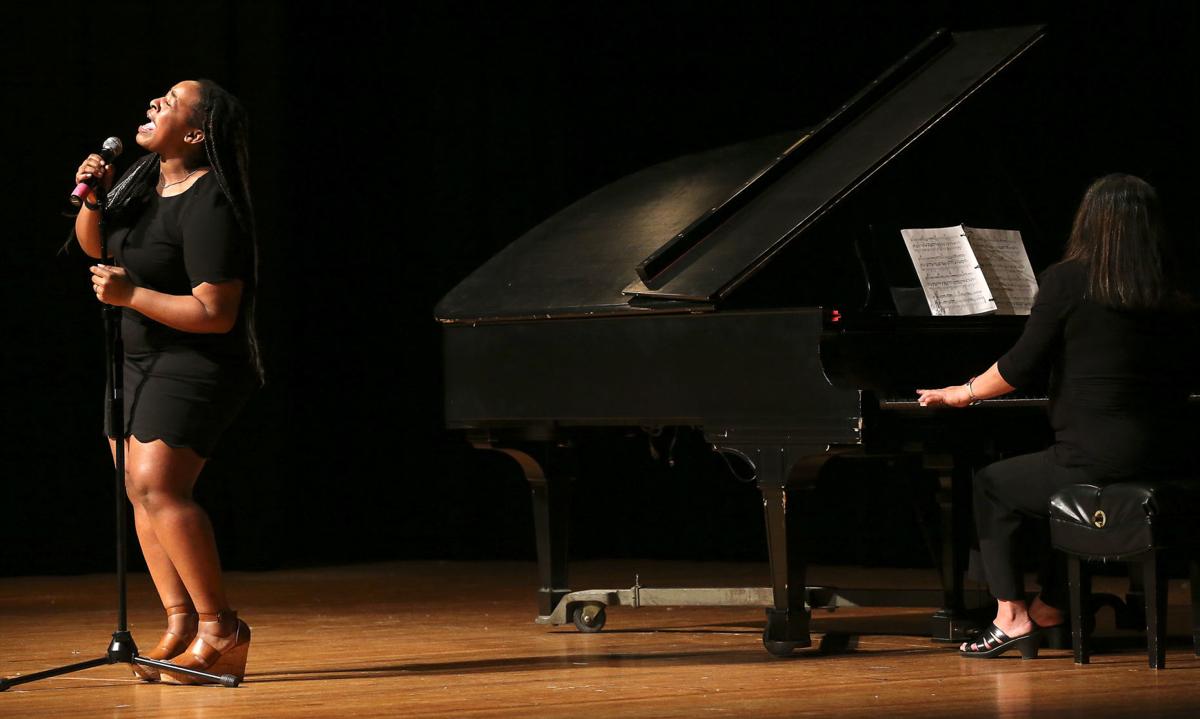 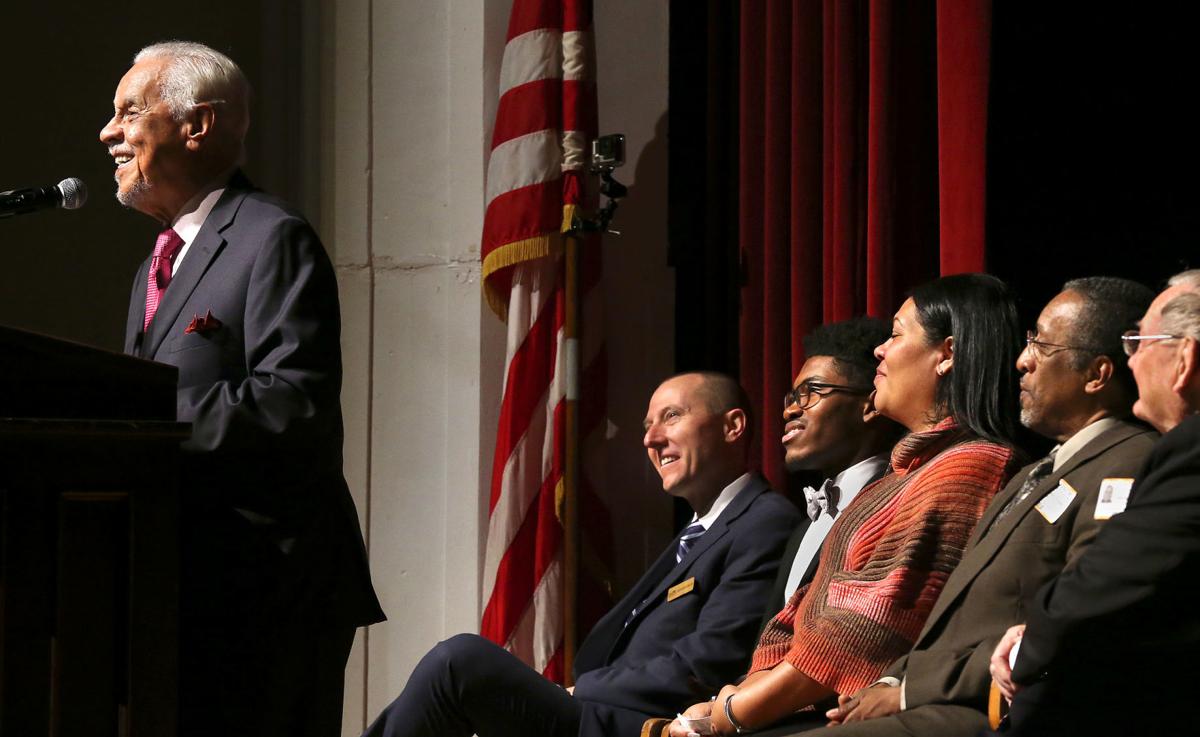 Former Virginia Gov. L. Douglas Wilder is welcomed to Handley High School on Tuesday, where he gave the keynote speech for a Black History Month program.

WINCHESTER — Former Virginia Gov. L. Douglas Wilder was adamant when he spoke to Handley High School students on Tuesday morning that they "demand what is right," whether it's by running for office or checking off a box in the voting booth.

Wilder, who was the first African American to be elected governor in U.S. history, addressed the student body during a Black History Month program.

Wilder's visit to Handley was made possible by a gift to the Winchester Education Foundation from the The Delegate Jim Scott Public and Community Service Initiative.

Following his speech, Wilder answered questions for 20 minutes from a group of Handley seniors.

Kevon Weech, 17, sought advice for young people who are considering running for political office someday, but aren't sure yet.

"He told me just to keep it that way and to learn what the people wanted," Kevon said.

Kevon said he asked that question because he might run for local office in the future, perhaps mayor of Winchester.

Another student asked Wilder why he got into politics.

"I didn't like what was going on," Wilder replied. "I got involved in politics to demand what was right and to criticize."

Wilder said he was told he wouldn't get elected if he ran.

From his perspective, what is right is what serves all people. This includes safety, health and welfare. These resources need to be available to everyone, not just the few, Wilder told The Star after his speech.

"It's not just a racial divide, it's a class divide," he said.

Wilder said he also wants to see the U.S. find a "sensible, realistic" way to approach its immigration issues, as well as address the country's aging infrastructure and reform its criminal justice system.

During he speech, he said he visited every town, city and county in Virginia during his campaign for lieutenant governor.

"Don't believe you got to have all the money in the world to be involved in politics," Wilder told students after his speech.

He said people are still in charge of elections, no matter how much money is thrown at campaigns.

"Young people, don't believe that you got all the time to do it, commit yourselves to demanding what is right and criticize it," he said.

Wilder, who earned a law degree from Howard University, is a distinguished professor at Virginia Commonwealth University's L. Douglas Wilder School of Government and Public Affairs. Last year, a college student who worked alongside Wilder accused him of kissing her without her consent, among other allegations. An investigation conducted by an outside firm hired by VCU concluded that Wilder had kissed the student against her will. Wilder appealed the decision. In October, he held a press conference saying he had been cleared of the allegations, but VCU said his comments were "premature."

VCU spokesperson Mike Porter told The Star this week that the "matter is complete." He declined further comment, as it's a personnel matter. He said Wilder remains a professor at VCU.