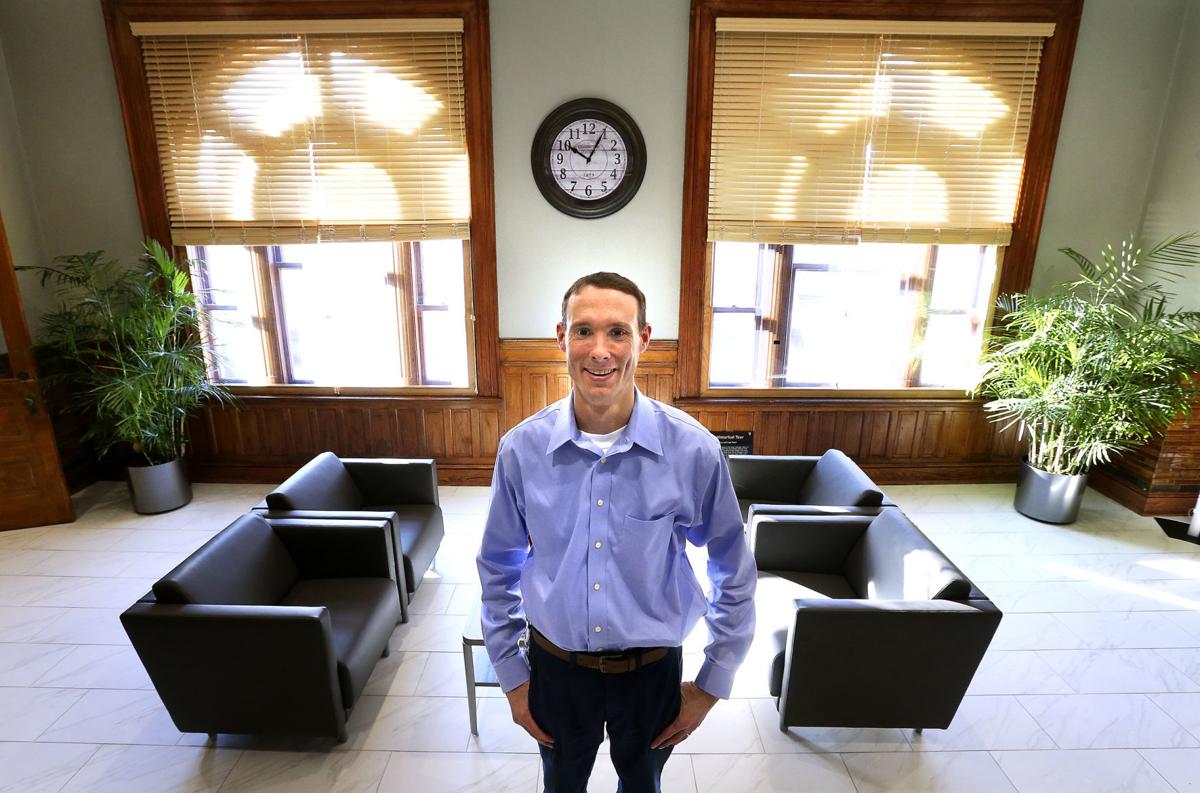 Frank Hopkins is the new zoning administrator for the City of Winchester. He is shown in the third floor lobby of the recently renovated Rouss City Hall on Monday. 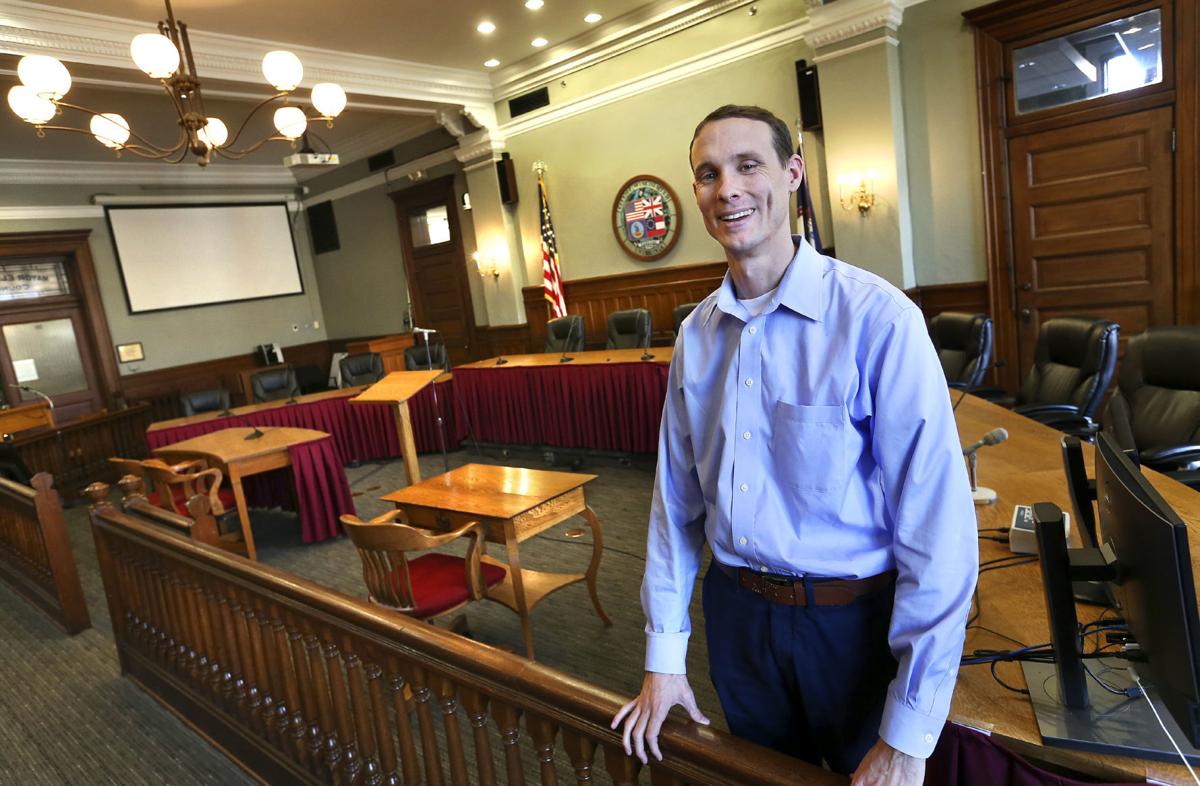 Frank Hopkins is Winchester’s new zoning administrator. He is shown in the council chambers at Rouss City Hall on Monday. 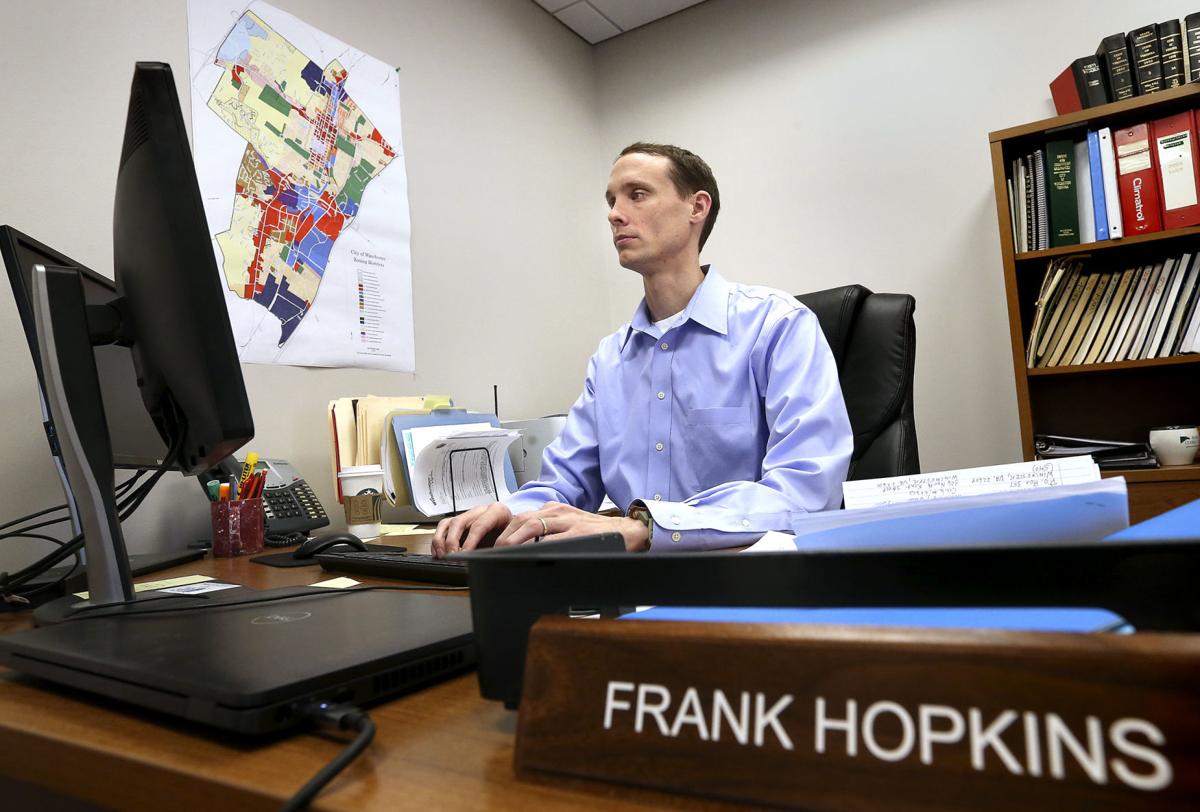 Frank Hopkins is Winchester’s new zoning administrator. He is shown in his office on the third floor of Rouss City Hall on Monday.

Frank Hopkins is the new zoning administrator for the City of Winchester. He is shown in the third floor lobby of the recently renovated Rouss City Hall on Monday.

Frank Hopkins is Winchester’s new zoning administrator. He is shown in the council chambers at Rouss City Hall on Monday.

Frank Hopkins is Winchester’s new zoning administrator. He is shown in his office on the third floor of Rouss City Hall on Monday.

WINCHESTER — A former Northern Virginia police officer is now patrolling the streets of Winchester to make sure property owners are complying with the city’s zoning regulations.

“I’m pretty much an independent arbitrator trying to make sure there’s a level playing field,” Hopkins said during an interview on Monday in Rouss City Hall.

Hopkins, his wife and their two young daughters live in Harrisonburg, so he spends two hours a day commuting. The 34-year-old said he doesn’t mind the drive, though, because Interstate 81 is not nearly as congested as the Northern Virginia highways he came to know during his five years as a police officer in Fairfax County.

Hopkins said his favorite part of police work was the regulatory stuff — making sure drivers were up to date with vehicle registrations and inspections, determining the most appropriate charges to file against offenders, and so on.

“I was very interested in the equity of things,” he said.

When Hopkins and his family moved to Harrisonburg in 2014, he decided to combine his passions for law enforcement and government operations by enrolling at James Madison University and pursuing a master’s degree in public administration.

After graduating in 2016, Hopkins wanted an administrative job with a local government but wasn’t sure how his talents and experience would best be utilized.

“I ended up going to Loudoun County for a management fellowship, rotating around to a whole bunch of different jobs,” he said. “In doing so, I learned a lot about planning and thought, ‘I might want to do that.’”

After completing the one-year fellowship, he accepted a position as zoning inspector for the city of Harrisonburg.

“It seemed like a good, natural thing to do,” Hopkins said. “I kind of fell into zoning, which I really like because it blends a lot of the police work side of things like following codes.”

Zoning is a tool used by localities to determine the best land uses. For example, some parts of a municipality are designated for residential use, while others are set aside for retail and industrial operations. Zoning also provides specific rules for what is and isn’t permitted in each zoning district, such as tall fences or whether a home-based business can operate in a residential neighborhood.

“Zoning is democratic,” Hopkins said. “The city as a collective has decided these are the rules. If you don’t like the rules, be a change champion and come in here and say, ‘Hey, I don’t want this part of the zoning ordinance and would like to change it.’ We can work with you and put that before the rest of the city, and then you’ll have the real litmus test of whether your grievances are valid or not. ... Everybody has a voice.”

Zoning also requires maintaining a delicate balance between local government regulations and property owners’ rights to use privately owned parcels as they see fit. Hopkins said he respects the rights of property owners, but he believes the appearance and functionality of an entire community benefits when everybody follows the same set of zoning regulations.

“It helps property values stay at consistent levels,” he said. “If there was no zoning and a factory could go in next door to you, I’m sure that would be a detriment to your house’s value.”

With just a month on the job, Hopkins said he’s still learning the lay of the land and the operations of his department.

“So far, everything has been super collaborative,” Hopkins said.

It’s clear that Hopkins is enjoying his new job and the city where he works.

“I’m ecstatic,” he said. “My wife said the other day that this is the happiest I’ve been about a job in a very long long time.”

This entire area needs more code enforcement. Let's not sugar coat the article with residential and commercial use issues. The important part of this job is removing and charging.violators.

Trash, abandoned vehicles, personal items sitting on front and side lawns should be a priority.

Revenue making at its finest. Mixed with a lil harassment.

all you all want to do is harass people typical cop.hows about getting drug dealers and pedophiles off the streets???