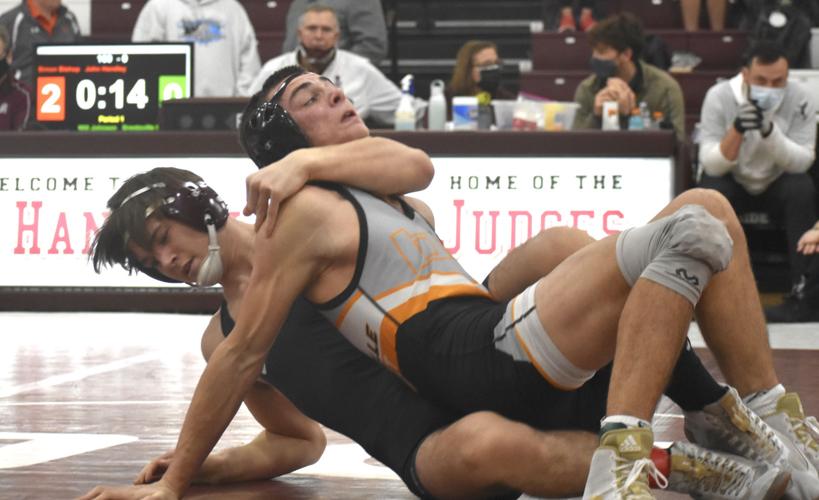 Handley junior Simon Bishop controls the neck of Brentsville’s Will Johnson in the 160-pound championship on Saturday in the Judges Invitational at Maddex-Omps Gymnasium. Bishop won 10-2 to lead Handley to fourth out of 15 teams. 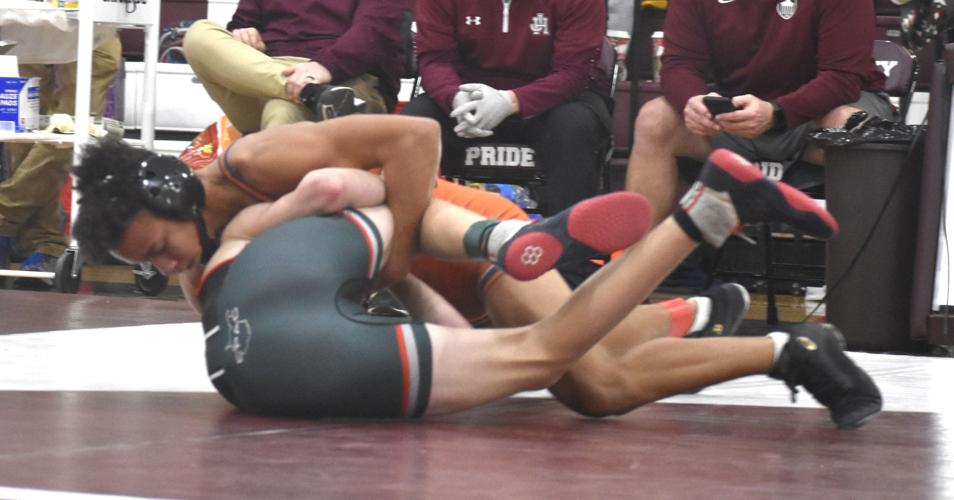 James Wood's Braden Sitton (left) and Orange County's Ethan Turner eye each other in the 132-pound championship at Saturday's Judges Invitational at Handley. Sitton's takedown with one second left broke a tie and gave him a 9-7 win.

Handley junior Simon Bishop controls the neck of Brentsville’s Will Johnson in the 160-pound championship on Saturday in the Judges Invitational at Maddex-Omps Gymnasium. Bishop won 10-2 to lead Handley to fourth out of 15 teams.

James Wood's Braden Sitton (left) and Orange County's Ethan Turner eye each other in the 132-pound championship at Saturday's Judges Invitational at Handley. Sitton's takedown with one second left broke a tie and gave him a 9-7 win.

The junior wrestler pinned his first three opponents, then defeated Brenstville’s Will Johnson by a 10-2 major decision in the 160-pound championship bout on Saturday at Handley’s Maddex-Omps Gymnasium.

The 2020 Judges Invitational was canceled because of snow, and large invitationals were not held last year due to the COVID-19 pandemic. Thanks to Bishop, Handley got to enjoy having an individual champion in the return of the tournament, which featured 15 teams.

“I felt like this is close to the best I’ve wrestled all season,” said Bishop, who took third in Class 4 at 152 pounds last year. “It felt really good to be able to represent [Handley] and win.”

After recording a takedown with 24 seconds left in the first period, Bishop controlled his match from there with Johnson. He took seven seconds to get a reversal in the second and earned three-near fall points at the end of the period for a 7-0 lead.

Johnson scored a takedown 36 seconds into the third period, but Bishop escaped 23 seconds later for an 8-2 edge, then added a takedown in the closing seconds.

“He had a sore throat and had a day or two when he needed to rest,” Mezzatesta said. “It was nice to see him come out on top. He’s starting to peak.”

On Saturday, the Class 2 Eagles took second again to Class 5 Woodgrove as the smallest school in the field. Every other participant was Class 3 or larger.

“Coming in, I didn’t see us coming in second place,” Clarke County coach Jon VanSice said. “I’m very happy with how we wrestled.

“We’re as close to a full lineup as we’ve been in years. We’re only missing one [at 285], and that’s a big difference when you come into these tournaments and you’ve got numbers you can get points with. It showed with how we did out here today. The team is getting the work done in the [practice] room, and it pays off out here.”

On Saturday, the Eagles had five people place in the top four as a result of winning their respective pools. Each weight class was broken up into four round-robin pools, with the pool winners competing for first through fourth place. The pool runners-up competed for fifth through eighth place, the No. 3 pool finishers wrestled to finish ninth through 12th, and the remainder were placed in the 13th-15th bracket.

Joining Jacobson (26-3) and Long (34-3) on the podium were Trace Mansfield (195) and Michael Perozich (220), who each took third, and Kolton Vincent (fourth at 113). Titus Hensler (182) also had a strong tournament, placing fifth and only losing to tournament champion Abram Chumley of Kettle Run in pool competition.

Long, a state runner-up at 132 last year, pinned his first three opponents and won by major decision in the semifinals. He didn’t get to wrestle in the finals because Kasey Cassaza of Louisa County forfeited.

Long hopes the work he’s been doing in neutral this year will lead to first place at the state tournament.

“If I can get better on my feet, I think I have a shot at winning,” Long said.

Long feels the Eagles have a shot at a team state championship as well after taking fifth last year.

“We’re friends and we support each other,” Long said. “We’re way better than we were last year.”

Clarke County not only brings back seven wrestlers with state tournament experience this year (a potential eighth, heavyweight Roger Tapscott, is unable to wrestle this year due to a football injury), but they’ve also added several talented freshmen. That group is led by Jacobson, who won his third tournament of the year on Saturday by pinning four of his five opponents, including Hagan Winsor of Musselman (W.Va.) in 3:47 in the championship match.

“He was just low, and I just ran him straight back,” Jacobson said. “It feels good to win this.”

VanSice said he’s been impressed with the maturity Jacobson has demonstrated as a freshman.

“He’s very athletic, very strong and very quick,” VanSice said. “He reacts to bad situations very well and gets out of a lot of bad situations.”

James Wood’s Sitton (21-4) found himself in a difficult situation in the 132 championship match against Orange County’s Ethan Turner.

Sitton recorded a reversal to go up 5-3 with 41 seconds left in the third period, but then a flurry of moves that took a couple minutes for coaches and officials to sort out left the match tied 7-7 with 25 seconds left and put the two wrestlers in neutral.

Sitton watched the third period of Turner’s semifinal match. When Turner gave up three near fall points, he took that as a sign he could wear down Turner in a potential third period as well. So when the referee restarted the match, Sitton felt the match was his for the taking. Sitton drove at Turner’s midsection, grabbed his legs and brought Turner to the mat for the winning takedown.

“Our school is known for the best conditioning,” Sitton said. “I just looked for an opening.”

“Braden did a great job all day of finishing,” James Wood coach Cory Crenshaw said. “That’s just something he’s been working on a lot the past couple of years.”

Sitton was a state qualifier at 106 pounds as a freshman, but he didn’t wrestle as a sophomore, and Frederick County didn’t compete in the Virginia High School League season last year. Sitton has been a year-round wrestler for 84 Athletes in Stephens City since he was a freshman though, and his experience and determination are paying off this season.

But last week in Charles Town, W.Va., Sitton earned a 3-1 sudden victory overtime win over Yriart. They didn’t get a chance for a rubber match Saturday because Turner beat Yriart 10-6 in the semifinals.

“[Beating Yriart] boosted my confidence,” Sitton said. “After that, I knew what I was capable of, basically.”

James Wood freshman Colton Bendure (16-1) suffered his first loss of the year to take second at 113, falling to Orange County’s Justin Jones 5-4 as a result of Jones riding Bendure out in the ultimate tiebreaker third overtime period. Jones earned the tournament’s Most Outstanding Wrestler for the weights 106-145.

Some close calls that didn’t go Bendure’s way created the opportunity for Jones to win.

After Bendure tied the match at 3-3 11 seconds into the third period with an escape, Bendure was initially given a takedown with 25 seconds left. But Orange County objected during a stoppage with 15 seconds left, and the takedown was wiped out.

“At that point we had what we thought was a locked up Merkle,” Crenshaw said. “Legs in, we’ve got the arm trapped, we’ve got the hands locked. We had everything we thought we needed. The referees got together and disagreed. They felt that even though we had it locked up, that it was still a scramble position. [Jones] had his arm around the back, so it wasn’t like we were in full control.”

After a scoreless sudden victory overtime, Bendure got an escape to start the first tiebeaker overtime to go up 4-3. Jones then got an escape of his own six seconds into the second tiebreaker to tie it at 4-4. Crenshaw thought Jones was out of bounds when he broke out of Bendure’s control.

Bendure scored the match’s opening points with a takedown, so he had the option of taking bottom and trying to get an escape or riding out Jones for the ultimate tiebreaker. He chose the bottom. The referee called Jones for stalling and gave Bendure a point with 16 seconds left (Jones had previously been called for stalling).

But after the officials came together, they decided to retract the stalling penalty, and the match ended with Bendure unable to break free of Jones’ control.

“It sucks to lose your first match in high school that way,” said Crenshaw of Bendure, who hadn’t competed in a match since December before Saturday. “He understands we’ve got some growing to do. Conditioning was a little off there, too. I felt like if we had a little more conditioning on that boy, that we would have finished it earlier.”

“Today wasn’t bad for right now, but we’ve still got some bugs and kinks to work out,” Crenshaw said.

Handley was also led by Nick Baker, who fell behind 4-2 on a takedown with 35 seconds left in the second period and lost 5-3 to Louisa County’s Gianpol Ciatola in the 120 final. Hayden Thompson (106) and Joey Mullin (285) each placed third and Logan Westfall (126) and Quinton Mudd (220) each placed fourth.

“Fourth place is generally where we’ve been,” said Mezzatesta of a Judges team that also took fourth at Virginia Beach and Hagerstown, Md., tournaments. “We had several guys perform well. We’re making gains.”