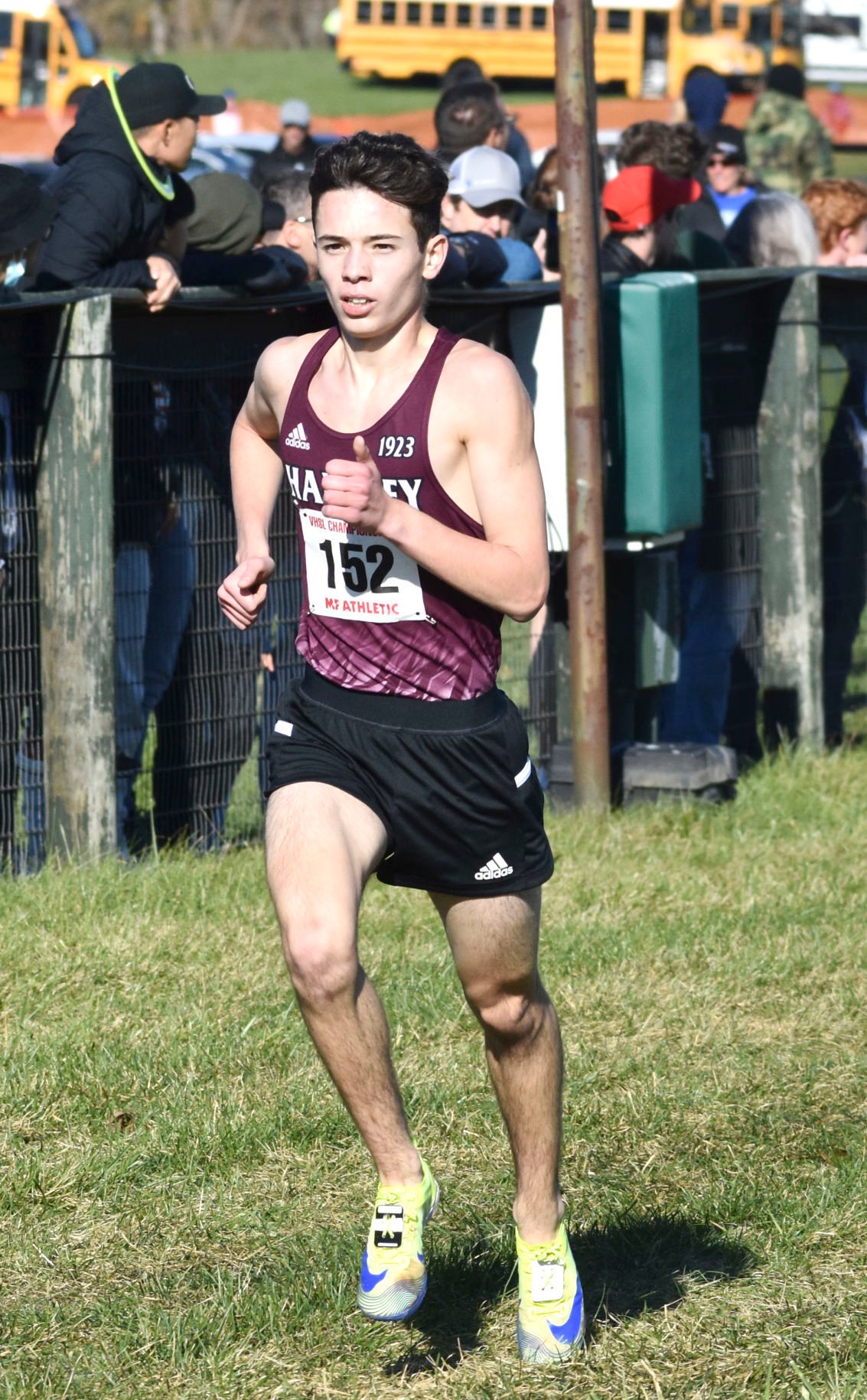 Handley senior Nico Schianchi makes his way down the final straightaway on Saturday at the Class 4 state cross country race at Great Meadow in The Plains. Schianchi placed ninth for his first All-State medal. 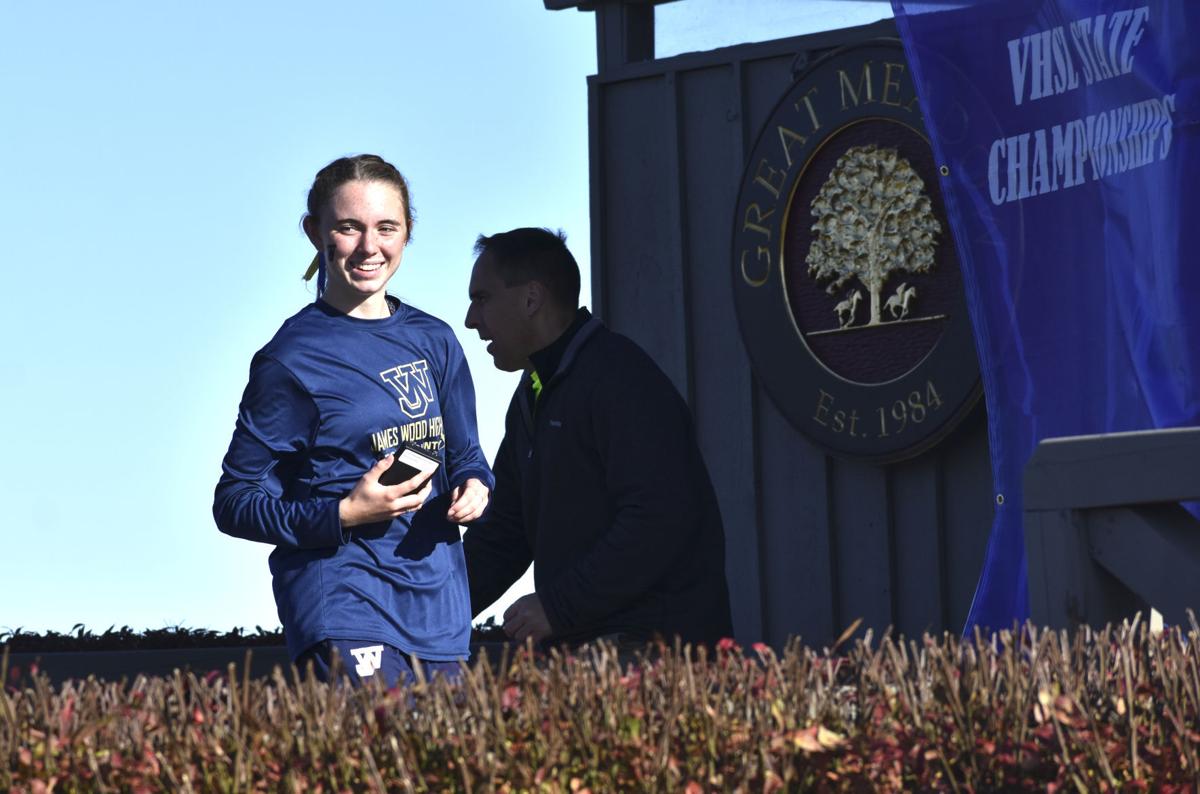 Handley senior Nico Schianchi makes his way down the final straightaway on Saturday at the Class 4 state cross country race at Great Meadow in The Plains. Schianchi placed ninth for his first All-State medal.

THE PLAINS — Shortly after completing an amazing 150-meter sprint to the finish line in which she caught three runners, James Wood senior Lauren Beatty leaned over and vomited. She then stood up, walked a few steps, leaned over, and did it again.

Beatty was one of several local runners who didn’t always feel their best running on a somewhat muddy Great Meadow course on a windy and cool day in the low 50s. But when it was all over, she was one of four whose perseverance was rewarded with All-State medals at Saturday’s Class 4 meet.

Handley senior Nico Schianchi (ninth) and James Wood senior Nathaniel Woshner (14th) in the boys’ race and Beatty (13th) and Millbrook junior Madison Murphy (15th) in the girls’ race all earned medals for placing in the top 15 at Saturday’s Class 4 meet. It’s the most All-State runners produced by Winchester/Frederick County boys and girls since there were also four in 2014.

Schianchi and Beatty are All-State for the first time, while Woshner earned his second All-State medal and Murphy secured her third. All four of them said there were instances during the race where they were struggling.

The only two local team qualifiers at Saturday’s competition weren’t in the hunt for a trophy. The Handley boys placed sixth out of 12 teams with 151 points and James Wood placed ninth with 178. After winning four straight Class 3 titles, Western Albemarle won the boys’ title with 77 points, 19 in front of Grafton, which took second for the third straight year.

Coaches and runners noted that the pace in the first mile for the boys’ race wasn’t particularly fast, which resulted in a lot of runners packed together and sometimes making contact with each other.

Schianchi, a second-year Handley runner who transferred from Iowa, held his own. He said he fell off from some of the top runners at the start of the third mile, but he still managed an impressive time of 16 minutes, 4 seconds over 3.1 miles and was Region 4C’s No. 2 runner, just like he was at the actual Region 4C meet 11 days earlier on a different course setup at Great Meadow. Woshner was 14th in 16:14.

“It wasn’t my best race,” said Schianchi, who recorded a time of 15:40 at regionals. “I did not feel very strong in the last mile. I really thought people were going to catch me. But I guess everyone else was pretty tired, too, and I managed to stick [to top 10].

“[All-state] is something I’ve worked on for four years. It’s a nice way to finish [my high school career] off.”

Handley coach Mark Stickley said he liked what he saw from Schianchi, and thought the slower opening pace worked to his benefit.

“He was able to tuck in and stay protected,” Stickley said. “He really ran where he should have been and just ran a great race.”

Stickley thought coming into Saturday that his Region 4C runner-up team was one of many that had a chance to win the boys’ title in Class 4, which is no longer dominated by Loudoun Valley (the Vikings took third for the second straight year). But a deep Class 4 field of teams that also included spring Class 5 state champion Atlee proved to be too much.

“The wind was a factor,” Stickley said. “A lot of people were too conservative. I wanted our guys to be a little more aggressive early, and in retrospect we should have probably just laid back and then moved through the field. Some of our guys looked a little rough.”

Handley might have been hoping for better than sixth, but considering that the Judges hadn’t participated in a state meet since 2014, Stickley was pleased.

“I’m just so proud of these guys for making it this far,” Stickley said. “We didn’t even talk about making it to the state meet back in August. I told the guys in midseason after the Carlisle meet, ‘We’ve got a chance that we could be in the thick of things.’ They kind of looked at me like I had one eye in the center of my head, but then they started seeing it and believing it.”

Beatty admitted she had doubts she could earn a medal during the race.

“I started off how I wanted to,” Beatty said. “But right around two miles, I was like, ‘I don’t know if I’m going to be able to finish top 15.’ I was super tired. I’ve been battling some calf tightness, and it just started flaring up. I just told myself, ‘Hang on. That’s all I can do, is just hold on.’”

With about 150 meters left, Beatty said the Colonels coaches, including head coach Matthew Lofton, yelled to her, “You’re in 16th place. How bad do you want it?” It looked like Beatty had far too much ground to make up for her desire to even matter, but the standout 4x400 relay runner in track flew down the long final straightaway.

“I mentally just blanked, and I just ran,” Beatty said.

Beatty said it was definitely a memorable finish to her high school career.

“I’m so thankful for this sport and everybody here that supported me,” said Beatty, who only ran in one cross country race her junior season due to a femur fracture. “It’s just amazing to get here and finish where I did. Without my coaches and without my teammates, I wouldn’t have been there.”

Beatty clearly held nothing back on that final sprint, as evidenced by her post-race activities in the finish line area.

“The last time I puked after a race was at Kernstown [Battlefield] last year,” said a laughing Beatty, referencing the Shenandoah Valley Cross Country League series that was started in response to COVID-19. ‘I haven’t puked all season, but it’s something I’ve done since I was [really young]. It’s something I used to, so it didn’t really bother me.”

Lofton said it meant a lot to see Beatty finish so well after she had dropped a few spots from the position the Colonels wanted her to be in during the race.

“She had an amazing kick, and she finished where we thought she thought she should finish and could finish,” Lofton said. “I was really happy with that and for her. She is strong, and she was able to pass those girls who were kind of fading. It’s a such long final straightaway, that so many people can fade.”

For more coverage of Saturday’s meet, see Tuesday’s edition of The Winchester Star.