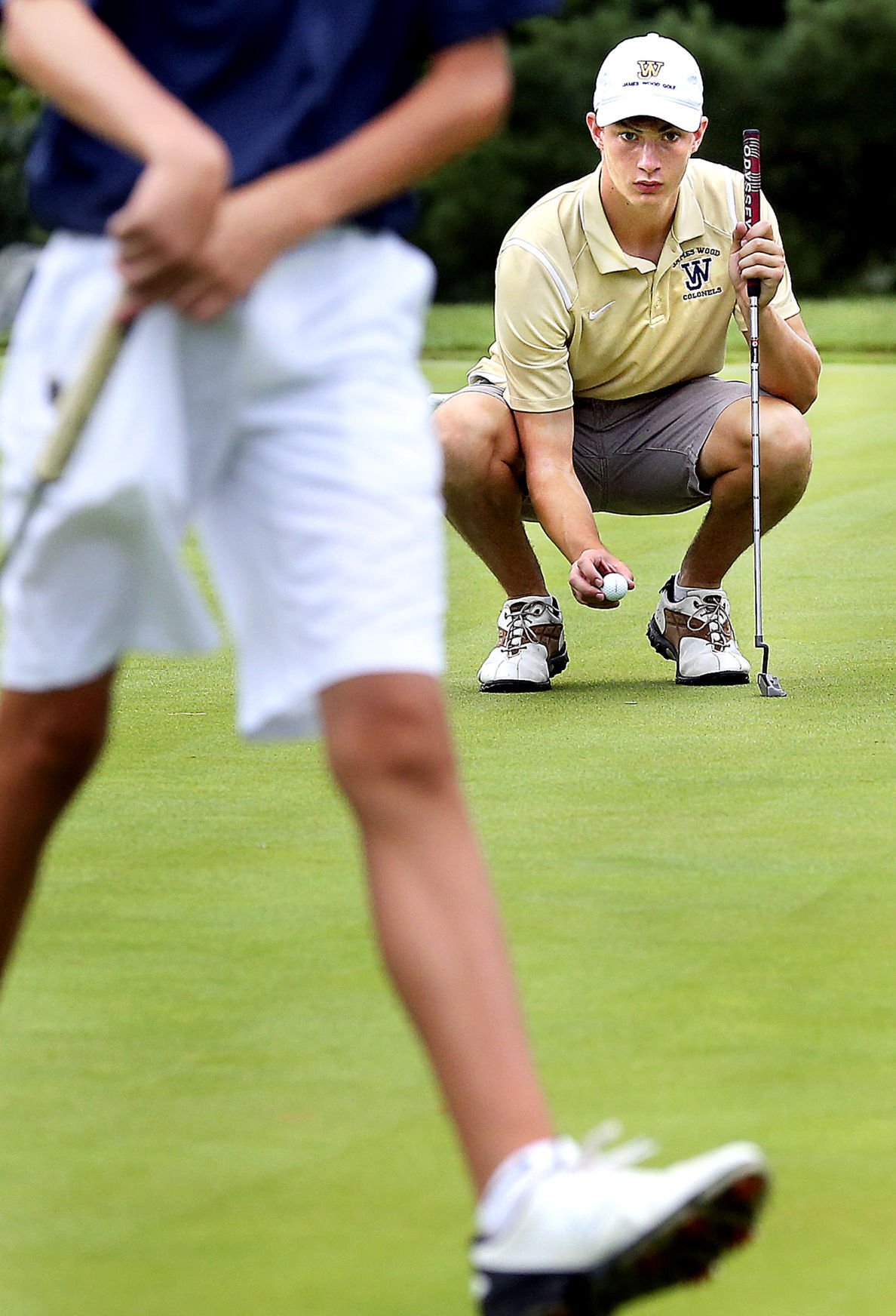 James Wood’s Carson Baker returns after recording an 18-hole stroke average of 84.6, the second best mark on last year’s team that qualified for the Region 4C tournament. Baker is one of two golfers back from last year’s top six for James Wood. 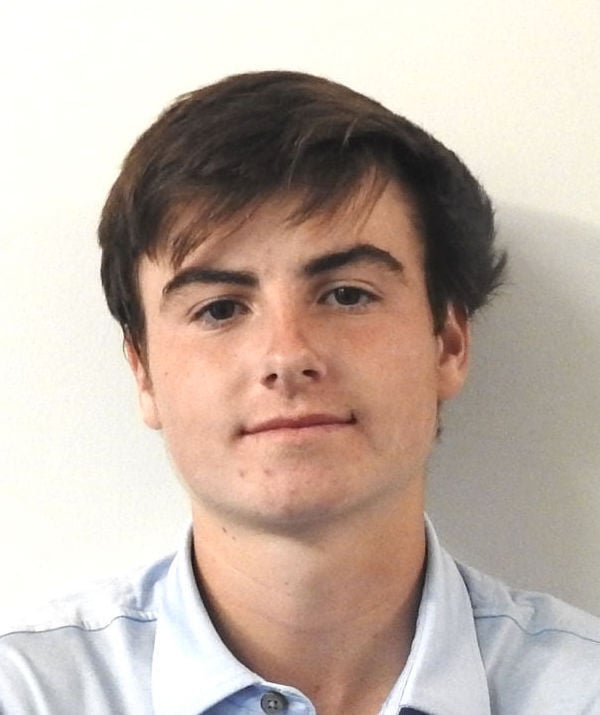 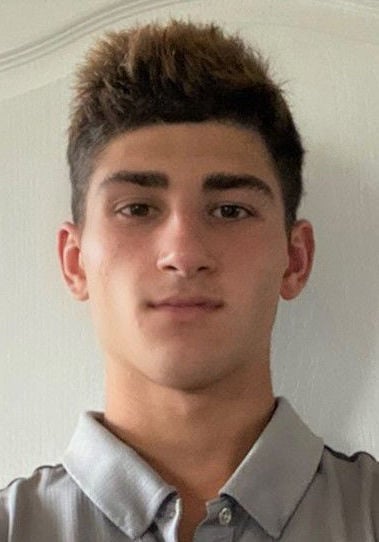 When Sherando coach Joe Knight emailed information from his team’s season-opening golf match last Thursday at James Wood, he wrote, “Here are the results from this afternoon’s blizzard golf match!”

It’s unlikely golf teams will start their year playing with snow and sleet falling, wind chill temperatures around 30 degrees and winds that exceed 30 miles per hour this coming August, when the Virginia High School League normally starts its season.

But any golf is better than no golf, and Sherando, James Wood and Millbrook shouldn’t have to worry about donning extra layers of clothing for the remainder of a Frederick County season that will last through April 27.

“I’m proud of both teams for what they did in that weather, because it was just terrible,” James Wood coach David Oates said on Friday. “To me, this is the beginning, we’re assuming, of the fall ‘21 season. We have a lot of young players who are focused on playing golf, and this season is helping us.”

All three schools are only playing each other this season, and so far, it’s been pretty competitive, with each team recording a 1-1 record.

Of the three, the Colonels had the most success last year, placing third in the Class 4 Northwestern District tournament to qualify for the Region 4C tournament. James Wood lost five seniors — four who competed in last year’s district tournament — and Winchester Star Golfer of the Year Jackson Lynch.

The only Frederick County Winchester Star All-Area first team selection back from last year is Carson Baker, the Colonels’ only senior. He posted a stroke average of 84.6 last year and tied for 10th in the district tournament.

Oates said Baker hasn’t been able to prepare for this season like he normally would because he played basketball for James Wood this winter, and he also missed time with a non-COVID illness. Junior Luke Davis, an All-Area second team pick, is also back from last year’s top six.

“Luke worked hard on his game in the offseason, and you definitely see that difference,” Oates said. “Carson is just getting going right now. Under normal circumstances, they’d probably be regional qualifiers, and who knows what would happen from there.”

James Wood also has a promising freshman in Caden Ganczak, who led the Colonels against Millbrook with a 3-over 39.

Millbrook (fifth in the district) brings back four of the players who competed in last year’s district tournament, including second team All-Area selection and senior Tyler McGuire. The Pioneers do not have senior Austin Allamong, a Region 4C qualifier from last year who elected not to play this season.

Millbrook appears to be a balanced squad. Juniors Nick Gressley (team best score of 40 against James Wood) and Jack Muldowney (tied for the second best score against James Wood with a 45) didn’t have counting scores in the win over Sherando. Junior Will Croyle led the way against the Warriors with a 41.

“[The match against James Wood] was a good starting point for us, but I know a lot of the guys were disappointed in how they played,” said Millbrook coach Mark Manspile, who has high hopes for his team, on Saturday. “It gives us something to build on and something we can improve on for sure.

“The guys were playing a lot during the pandemic, and just finding different ways to work out. Some of them work at Winchester Country Club, so they were going there. Guys were hitting their basements, just trying to find ways to stay in golf shape.”

Sherando has only two golfers who were on the team last year in senior Landon Rohani and sophomore David Johnston.

“Landon has really played a lot of golf and worked on his game,” Knight said. “His distance has really increased tremendously. He’s been playing very consistently in our practice rounds. We’re a very inexperienced team, so we’re looking for some leadership from him.”

Some of the Warriors’ newcomers have had strong starts, particularly Kadin Kasuboski. The junior led Sherando and finished one shot behind Wood’s Davis with a 44 at SVGC on April 1. He then tied for the team lead with senior Elijah Ralls — another player Knight is excited about — with a 48 on Tuesday.

Frederick County teams will be in action again at 4 p.m. today at Shenandoah Valley Golf Club.

The following is a glance at each Frederick County team:

Oates’ outlook: “Caden is probably one of the most accomplished freshmen that’s come in while I’ve been here. He’s got a world of possibility in front of him. His tee to green game is outstanding for a freshman. He’s working hard on his short game right now. He’s just so consistent and is extremely focused on becoming a very good high school golfer. I would love to be playing the VHSL schedule, but that’s just not a possibility. We’re totally focused on getting things in order. And then once our seasons end at the end of April, in three months we’re back at it again.”

Manspile’s outlook: “I think a lot of guys will play well, so I’m really looking forward to this season, for sure. We have a little bit more depth this year, so that’s exciting and encouraging. My expectations are pretty high. With what we’ve gone in our lineup, we have flexibility. And the kids work hard every day. We’re definitely going to compete out there.”

Knight’s outlook: “In terms of potential, Kadin was a very pleasant surprise [in the first match]. In the practice rounds, he had been averaging 50 or 51 a round, so for him to come in with a 44 really made the day for us. He has a natural swing, and there’s not much to tinker with there. He just needs the experience. Elijah Ralls also shows a lot of potential. He’s turned in some [practice] rounds under 40. He’s a really good competitor. A lot of my players this year are kids who just got bored this past spring when school shut down, and they got out and started playing golf. Josh Call is one of those kids. He shot a 46 [against] James Wood and he’s long off the tee, and if we can get his short game sharpened up a little bit, he has a lot of potential as well.”