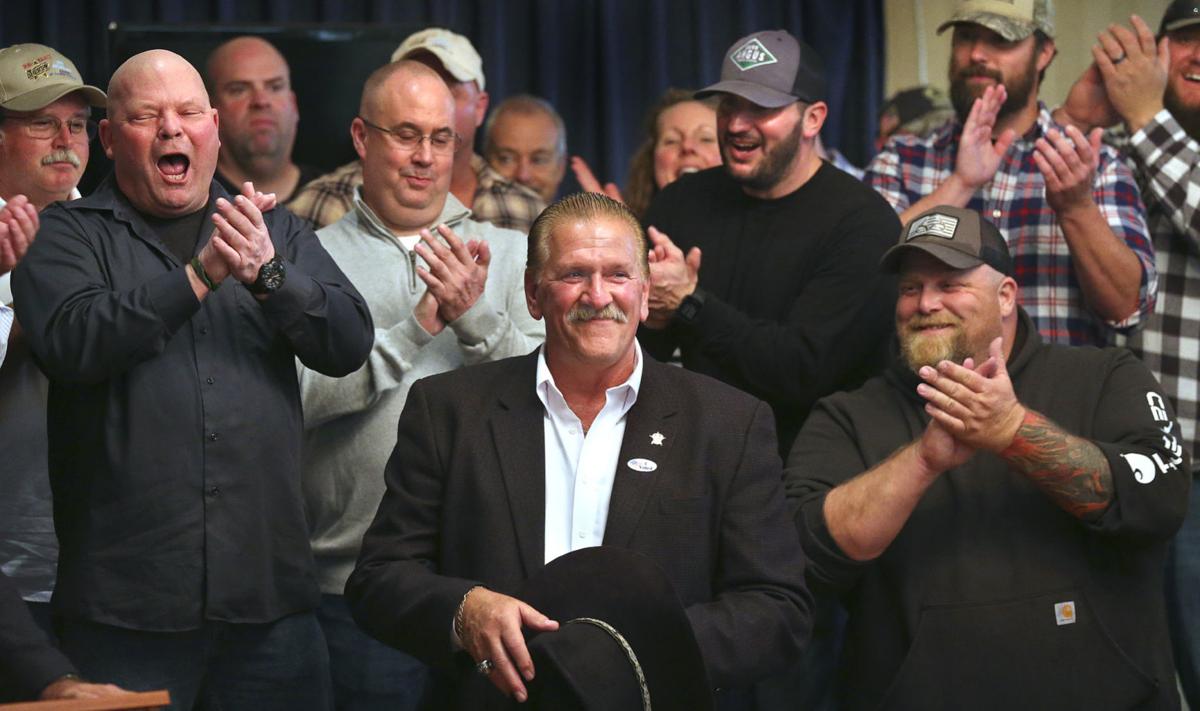 Frederick County Sheriff Lenny Millholland (center) is cheered by supporters at the Clarion Inn and Conference Center in Winchester on Tuesday night after he defeated challenger Allen Sibert, a Republican, in Tuesday’s election. Millholland ran as an independent. This will be his second four-year term. 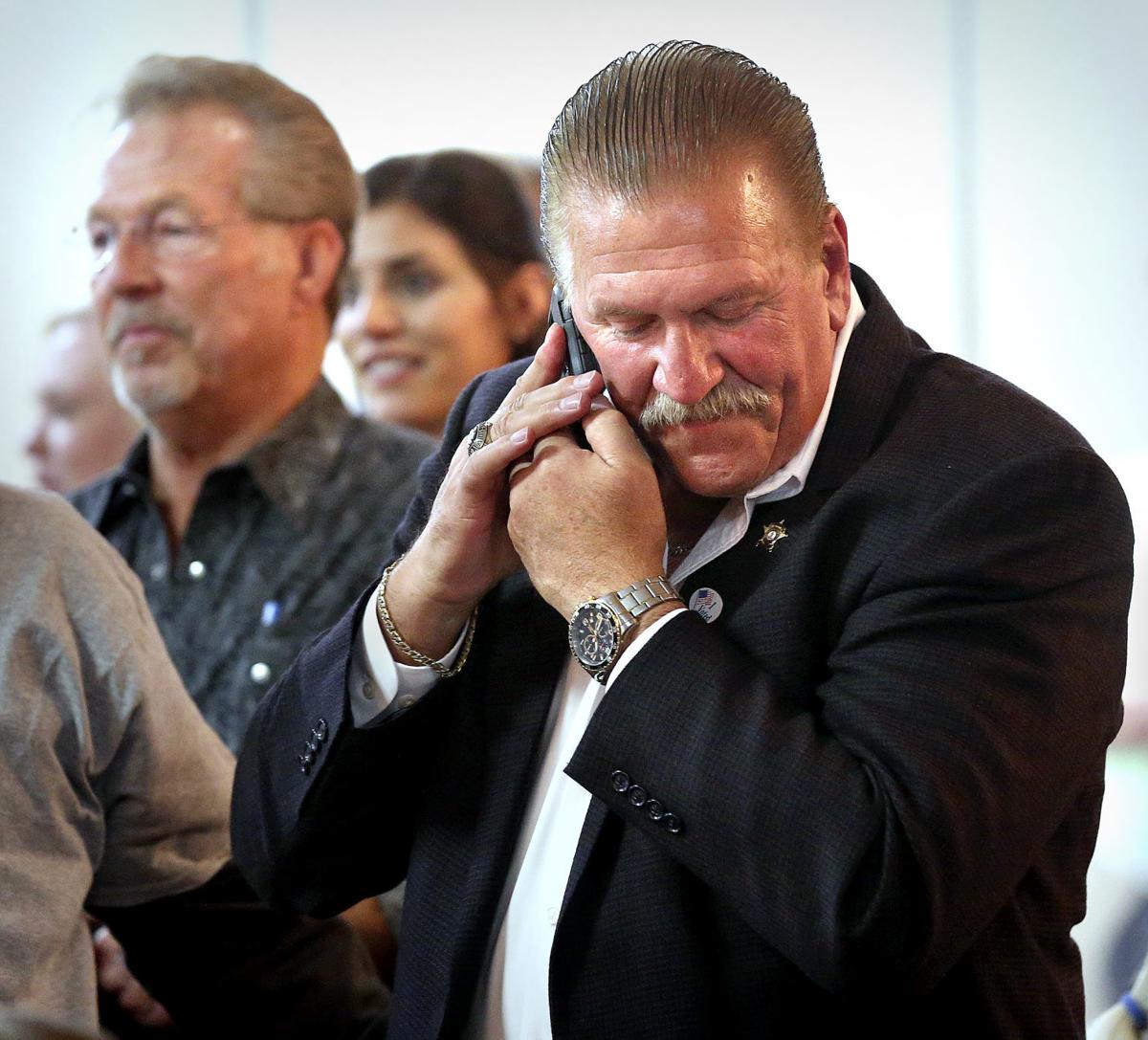 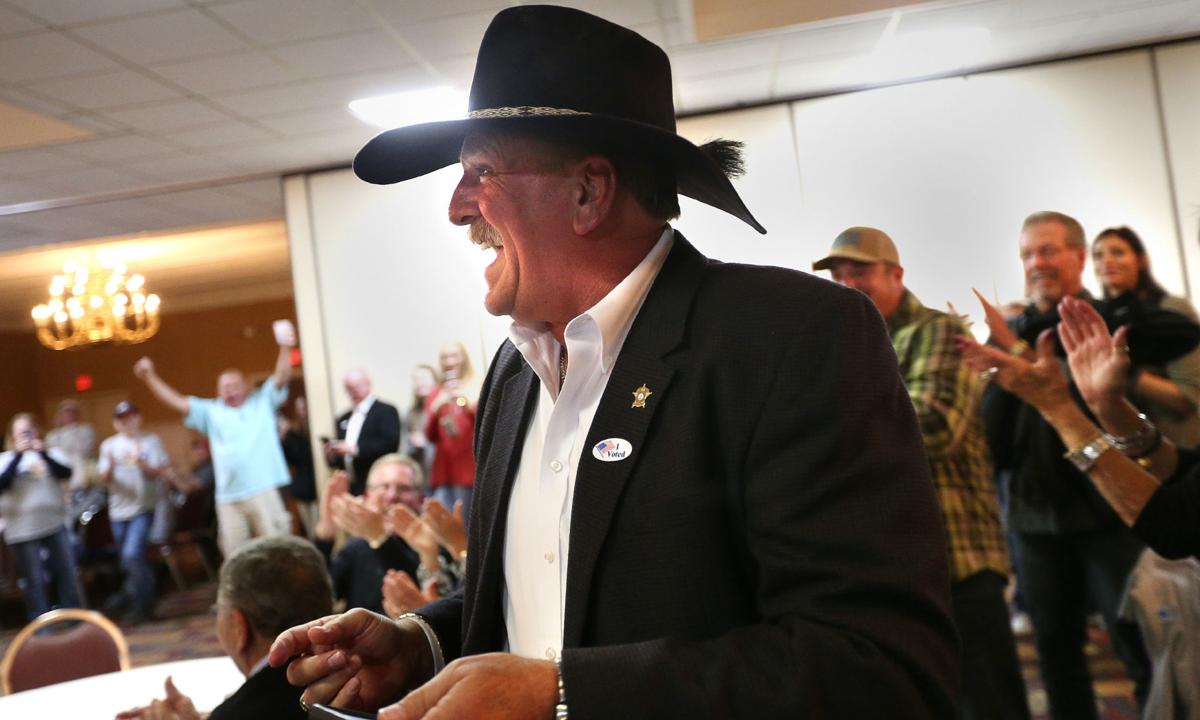 Frederick County Sheriff Lenny Millholland, who ran as an independent, walks to the podium to deliver his victory speech at the Clarion Hotel and Conference Center in Winchester on Tuesday night after voters chose him over his Republican opponent, Allen Sibert.

Frederick County Sheriff Lenny Millholland (center) is cheered by supporters at the Clarion Inn and Conference Center in Winchester on Tuesday night after he defeated challenger Allen Sibert, a Republican, in Tuesday’s election. Millholland ran as an independent. This will be his second four-year term.

Frederick County Sheriff Lenny Millholland, who ran as an independent, walks to the podium to deliver his victory speech at the Clarion Hotel and Conference Center in Winchester on Tuesday night after voters chose him over his Republican opponent, Allen Sibert.

WINCHESTER — At 10:30 p.m. on Tuesday night, Frederick County Sheriff Lenny Millholland donned a borrowed cowboy hat and strode toward the stage of the Clarion Inn and Conference Center as chants of “Four more years!” resounded from the crowd of about 200 supporters.

The 62-year-old Millholland, who took office in 2016 and ran this year as an independent, had just won a second term after a decisive victory over Republican Allen Sibert, a Winchester Sheriff’s Office major and chief deputy. Millholland received 14,137 votes (57.4%) to Sibert’s 10,442 votes (42.4%), with all 22 precincts reporting.

The campaign was often ugly, with Sibert accusing Millholland of supporting “sanctuary cities” for immigrants here illegally, being soft on crime and overspending taxpayer dollars. Millholland supporters noted Sibert, now a chief deputy with the Winchester Sheriff’s Office, had been investigated by state police for using seized drugs for training props while he was a coordinator of the Northern Virginia Drug and Gang Task Force. Sibert was never charged with any wrongdoing.

Millholland referenced the accusations by Sibert and Sibert’s supporters without giving specifics.

“My mother always told me, ‘No matter how bad it gets, son, stay on the high road.’ And I said, ‘But mom, there’s some times when I just have got to go down and squish something and then go back up. And she said, ‘No, just stay on the high road,’” he said. “During this election, there were very, very, very many times when I was going to go down there and I did the best that I could to stay where I was.”

With about 50 deputies standing on the stage behind him, Millholland thanked them for risking their jobs by vocally supporting him. He defended his fiscal management, saying he purchased badly needed equipment and supplies that kept deputies and the public safe. He cited the purchase of the overdose antidote naloxone in February 2016 that has revived at least 179 revivals including a woman who was six months pregnant.

“If it wouldn’t be for these guys and those back there and everyone in this room, I don’t know what Frederick County would be like,” said Millholland, a Winchester police officer from 1979 to 2001 and Winchester City sheriff from 2002 through 2014. “And I don’t know what would’ve happened had today not turned out how it did and someone else would have been in this office.”

Sibert told The Star in a phone interview Tuesday night that Millholland was “a tough opponent,” but he said he congratulated him on his victory during a phone call. Despite the loss, Sibert praised the electoral process.

“I think we challenged him and he prevailed,” Sibert said. “The people have spoken. And that’s the main thing — that the process in our country is followed through and people have that right to choose who they want to choose. What makes our country unique is after you do that, you come back together. You follow, you help. You try to make sure that the person that was elected is successful. And that’s all we want to do, continue to move forward.”

Sibert said his team “ran as hard a campaign as we could” and that he was very appreciative of them.

“I’d like to thank everybody that supported us, our campaign,” Sibert said. “It was truly humbling the amount of people that came out, supported and took time out of their day to just help with the campaign and support us in any way that they could.”

Now that the election is over, Sibert said he will continue to serve the community and the Winchester Sheriff’s Office “for as long as the Sheriff will have me.”

Naxalone??!!! Drug addicts choose their sickness..hows about making insulin affordable to the struggling folks..as far as the druggies are concerned they want to ruin their life and die so be it.noone is putting a gun to their heads and forcing them to shoot up..as far as this kangaroo election is concerned this is the good ol boy state peoples hands in other people's pockets.i personally despise police bc they are nothing like they were back in the day.they didn't hound you for being homeless and having an animal in your SUV a licensed service dog at that.they didn't breed discriminate bc your dog was a pitbull and tell you that you can't have your service animal at Apple blossom yet other dogs were present.they didn't follow you into sheets parking lot block you in and jump up in your window to see whose driving.I know this isn't going to matter but then again I don't care about anybody in Winchester either but I think Siebert would have been a better choice.

So much whining. If we had some form of universal health insurance (like the rest of the industrialized world), the drug companies wouldn't be able to gouge insulin users. But then, that would hinder your freedom...or something.

The campaign manager for Sibert used lies and fear mongering to try to turn the balance around. I hope he learned how not to run a campaign.

Now that the state has been lost to Democrats from millions of dollars coming from out of state donors you will see every one of Mr. Siberts predictions / facts come true. The Dillion Rule will be overturned in Va and Sanctuary Cities will officially pop up. Law officials will not work with ICE and Herring will continue to erode your 2nd amendment rights and Millholland will help Herring to be Governor in 2020. I really thought more voters could see through his façade but I guess 10,000 saw the real Lenny. Sibert ran a factual campaign but I guess voters wanted a celebrity versus a real Sheriff. Hopefully cowboy Lenny will just ride into the sunset.

Millholland and Sibert are both good men. Each has a different approach to how funds should be spent. It was disappointing to see both sides engaged in mudslinging when they were capable of just debating the merits of their positions. Nice to see a gracious concession from Sibert. Life goes on, there is still much work to be done in the field of law enforcement. Good luck to both men as they return to focus on their most important jobs.

Yes a lot of work. Better training in compassion and how to handle people. I sick and tired of people being treated as criminals. Police continue to abuse their powers and still not enough is being done to curb this. They think everyone is a danger to them. Hince everyone gets the same treatment. Dehumanized.

Just another great FACT of the day ... Frederick County citizens support for Sheriff Lenny Millholland has more than doubled since 2015 ... the numbers do not lie! They speak volumes!