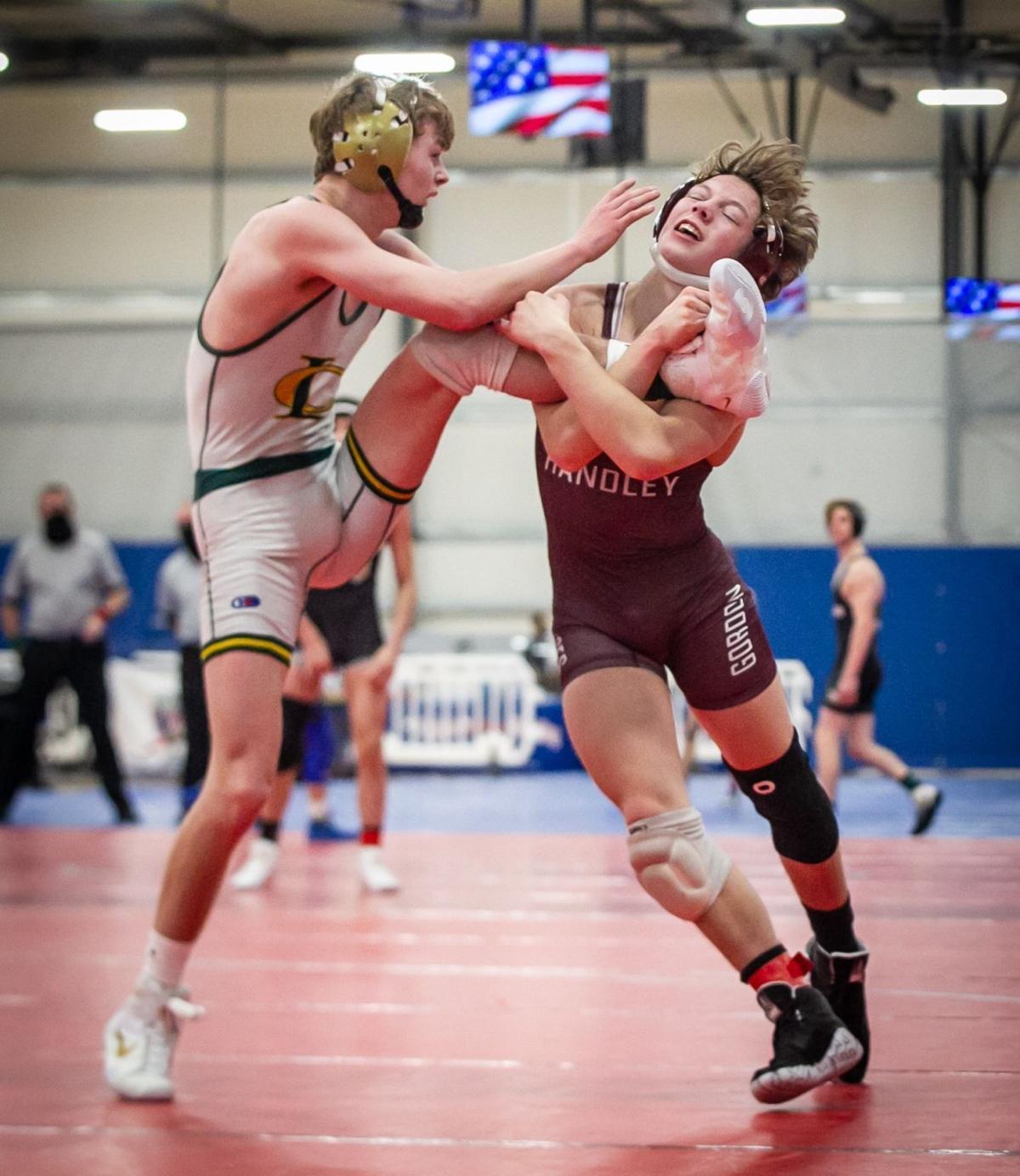 Handley’s Cam Gordon (right) battles against Owen Greslick of Louisa County in the finals of the 120-pound weight class at the Class 4 state tournament on Saturday in Virginia Beach. Greslick snapped a 4-4 tie late in the third period and edged Gordon 7-5 for the title. 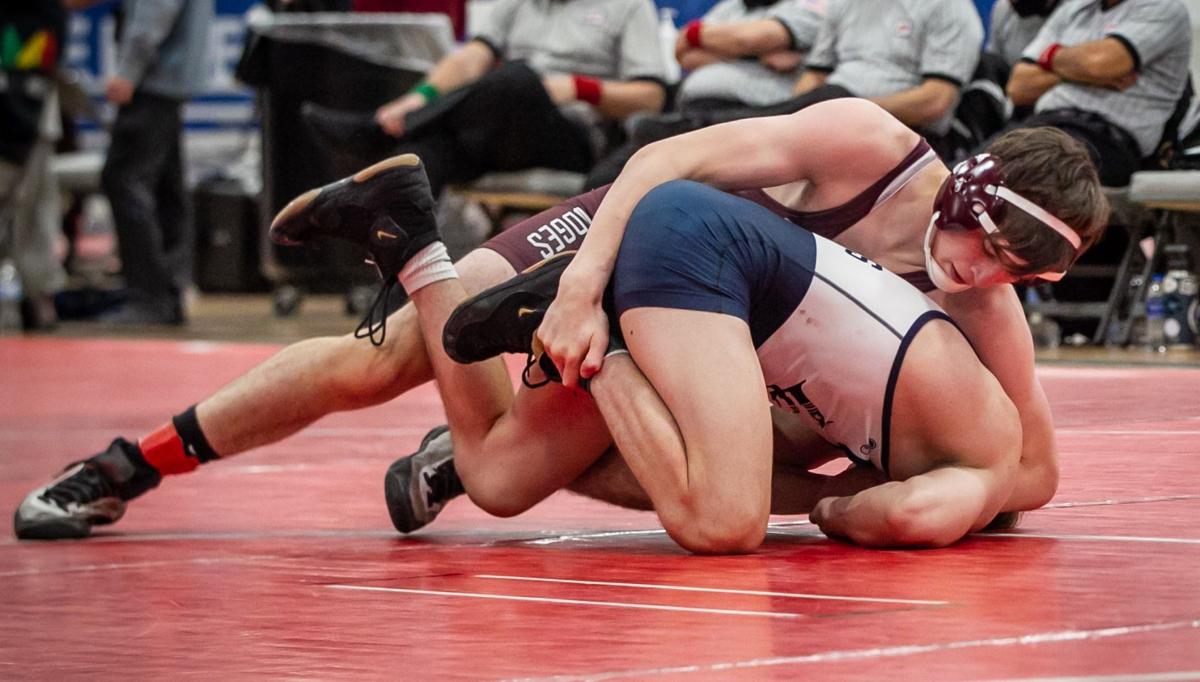 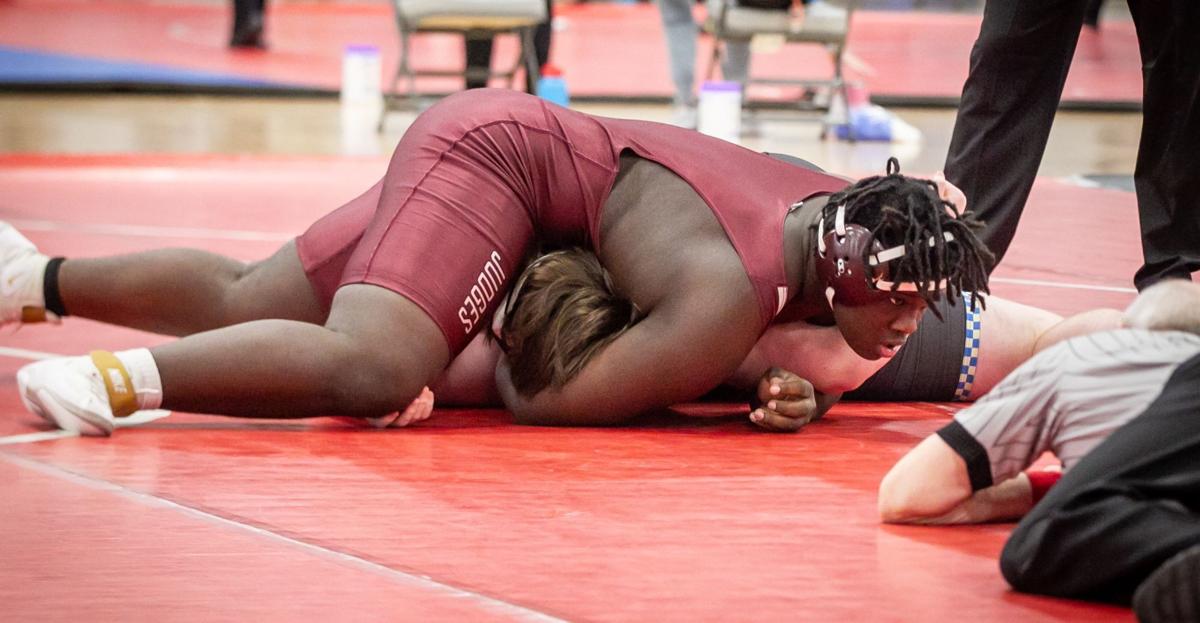 Handley’s Cam Gordon (right) battles against Owen Greslick of Louisa County in the finals of the 120-pound weight class at the Class 4 state tournament on Saturday in Virginia Beach. Greslick snapped a 4-4 tie late in the third period and edged Gordon 7-5 for the title.

Handley had three wrestlers place in the top six at Saturday’s Class 4 state tournament at the Virginia Beach Sports Center.

The Judges placed 13th out of 27 scoring teams with 36 points. Liberty won with 113 points and Eastern View was second with 92.

Gordon (21-3 record) nearly earned the Judges’ first state wrestling title since 2016. Trailing 3-0 in the third period against Louisa County junior Owen Greslick, Gordon recorded a takedown with 1:31 left to make it 3-2, then had another takedown to make it 4-4 with about a minute left.

“[Greslick] countered well,” Mezzatesta said. “It was one of those moments where I thought it was a stalemate. They were kind of wrestling through it and Cam almost got the takedown, and then that kid was kind of in position to score the points [for a takedown].”

Down 7-4, Mezzatesta said Gordon was able to escape to make it 7-5, and with 15 seconds left he put himself in a position to grab Greslick’s left leg and lift it into the air while both were standing. Mezzatesta said Gordon almost got a takedown as the final seconds ticked off, but Greslick held on to win by that 7-5 score.

“He wrestled a heck of a match and showed again that he lays it all on the line every second,” said Mezzatesta of Gordon, who improved on his third-place finish from his sophomore year when he was at 106 pounds. “There’s no give up or quit in him.

“I feel like we wrestled the better match. All the points that happened in the match happened because we were initiating the wrestling.”

Earlier on Saturday, Gordon defeated Spotsylvania junior Devin Burrows by fall in 4:54 in the quarterfinals and Smithfield junior Nik Voros 3-2 in the semifinals. That match was tied at 2 before Gordon recorded an escape nine seconds into the third period.

Mezzatesta thought Gordon wrestled well enough to win a championship, and he thought Bishop probably should have been in the championship match based on what he saw.

Bishop (22-2) had a bye in the quarterfinals, then lost 2-0 to Hanover senior Luke Hart in the semifinals as a result of reversal with 1:30 left in the third period.

But before that reversal, Mezzatesta thought Bishop might have ended the match at the end of the second period.

“Simon had the kid on his back, and I think they could have actually called a pin,” Mezzatesta said. “The referee and I went to the [scorer’s] table to discuss it, and he just saw it a little differently. I’ve looked at it three times on video now. He’s sitting on top of the kid, the kid’s on his back, and the period kind of runs out.

“I thought we were at least going to get [two reversal points and two back points], but they called nothing. The two refs conferred, and they were like, ‘no loss of control.’”

Bishop then beat Smithfield senior Khali Harden by fall in 1:59 in the consolation semifinals and Loudoun County junior Matthew Roberts 6-1 in the third-place match, only giving up an escape with two seconds left in the match. Bishop beat Roberts for the Region 4C title 3-2 last week.

Overall, Bishop only gave up three points in the tournament.

“He wrestled amazing,” Mezzatesta said. “Last week’s match with Roberts was kind of close, but this week it was a runaway, one-way match. Simon controlled it the whole way.”

Davenport (15-7) lost by fall in 1:49 to Salem junior Cameron Martindale in the quarterfinals.

He pinned Smithfield sophomore Justin Goodin in 44 seconds in the first consolation round, then fell by fall in 51 seconds to Eastern View junior Chaz Keen in the consolation semifinals. Davenport completed his tournament with a loss by fall in 2:20 to Amherst County’s Willie Jarvis in 2:20 to take sixth.

“He’s a young wrestler, and he’s learning every time out,” Mezzatesta said. “Some of those lessons, he learns the hard way. He was winning his last match [4-2], and he was just kind of doing one of those moves where he exposes his back, and he got caught again.

Overall, Mezzatesta has a lot to look forward to going forward. The Judges lose only one senior in 145-pounder Caleb Slack, and their returning group also includes freshman Nick Baker.

The 106-pounder did not qualify for the state tournament because only the top two wrestlers in each weight class advanced (Baker placed third in Region 4C), but he defeated state runner-up Christian Eberhart of Liberty in the Class 4 Northwestern District championship match. The state champion was Region 4C champion Bryson Rios of Loudoun County.

“We have a group we can grow with,” Mezzatesta said.