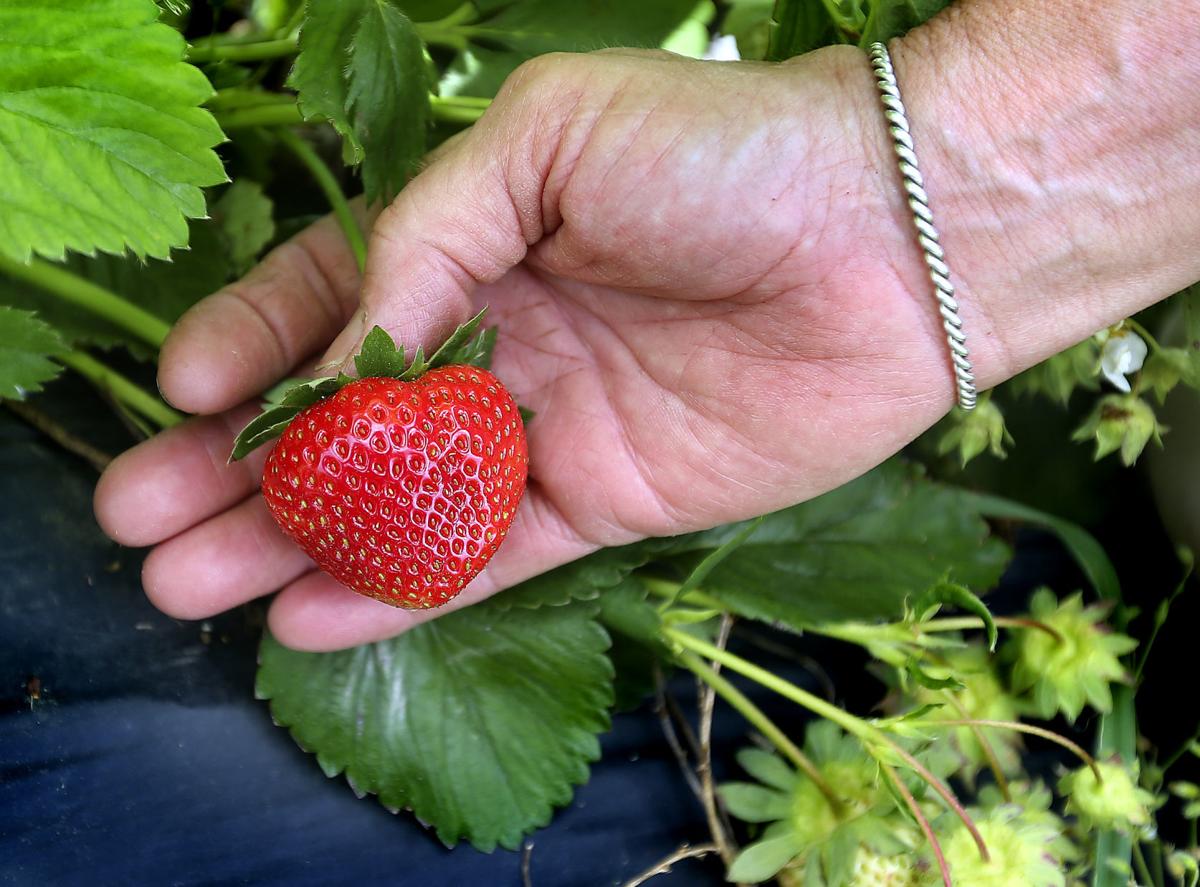 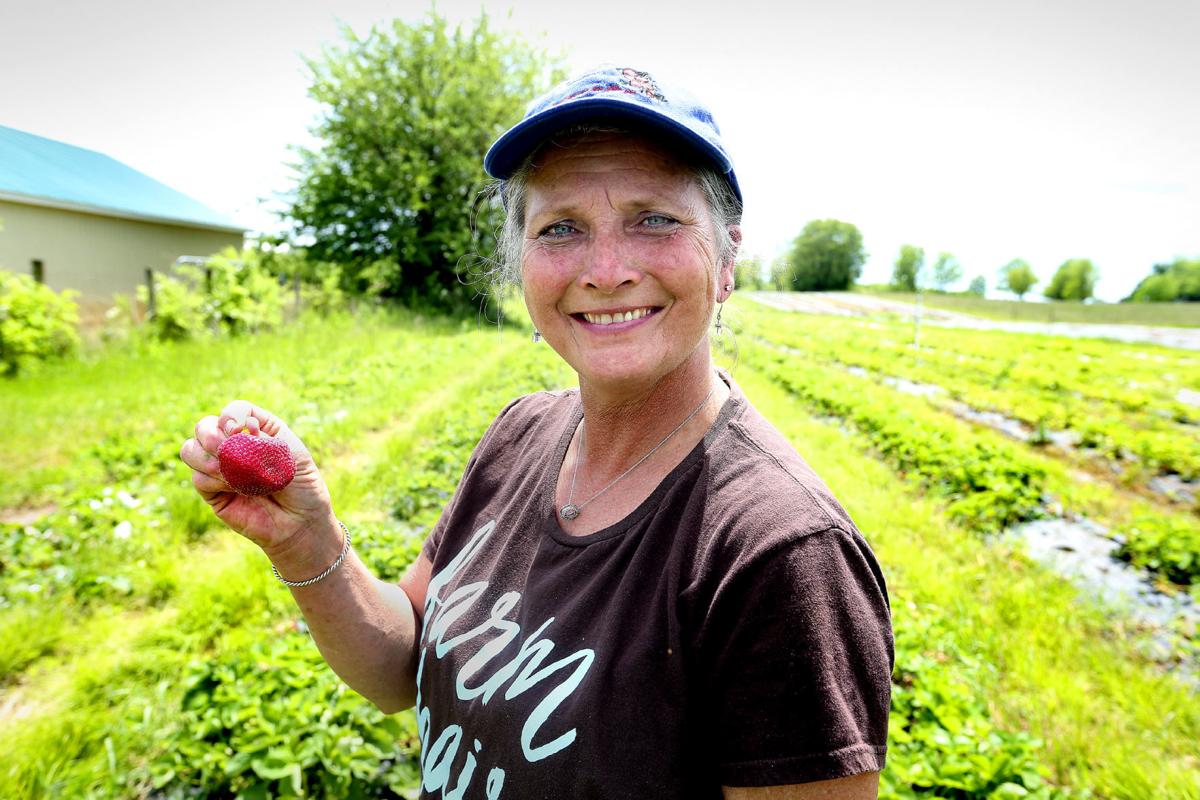 Lori Mackintosh, of Mackintosh Fruit Farm in Clarke County, stands in the farm's strawberry field with a large strawberry she picked moments before eating it. 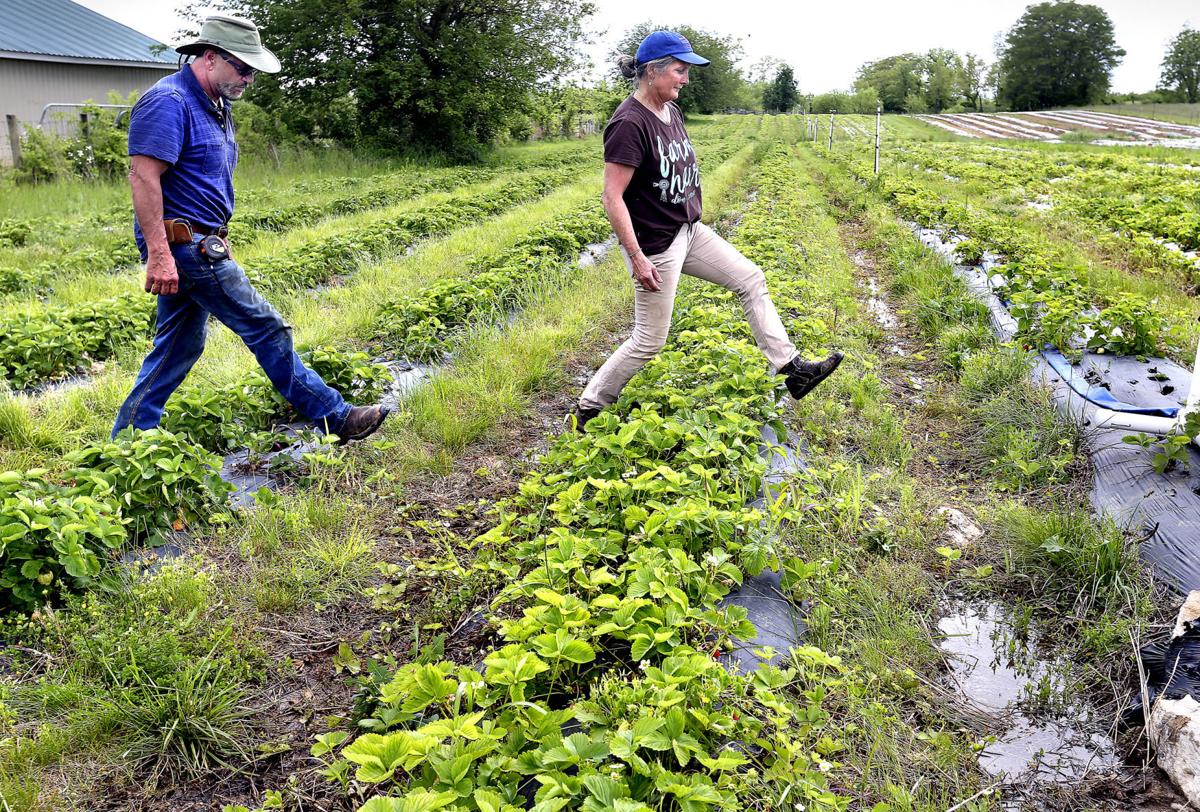 Bill and Lori Mackintosh step over the raised beds of their strawberry plants as they check the strawberry field on their Mackintosh Fruit Farm on Russell Road in Clarke County. . 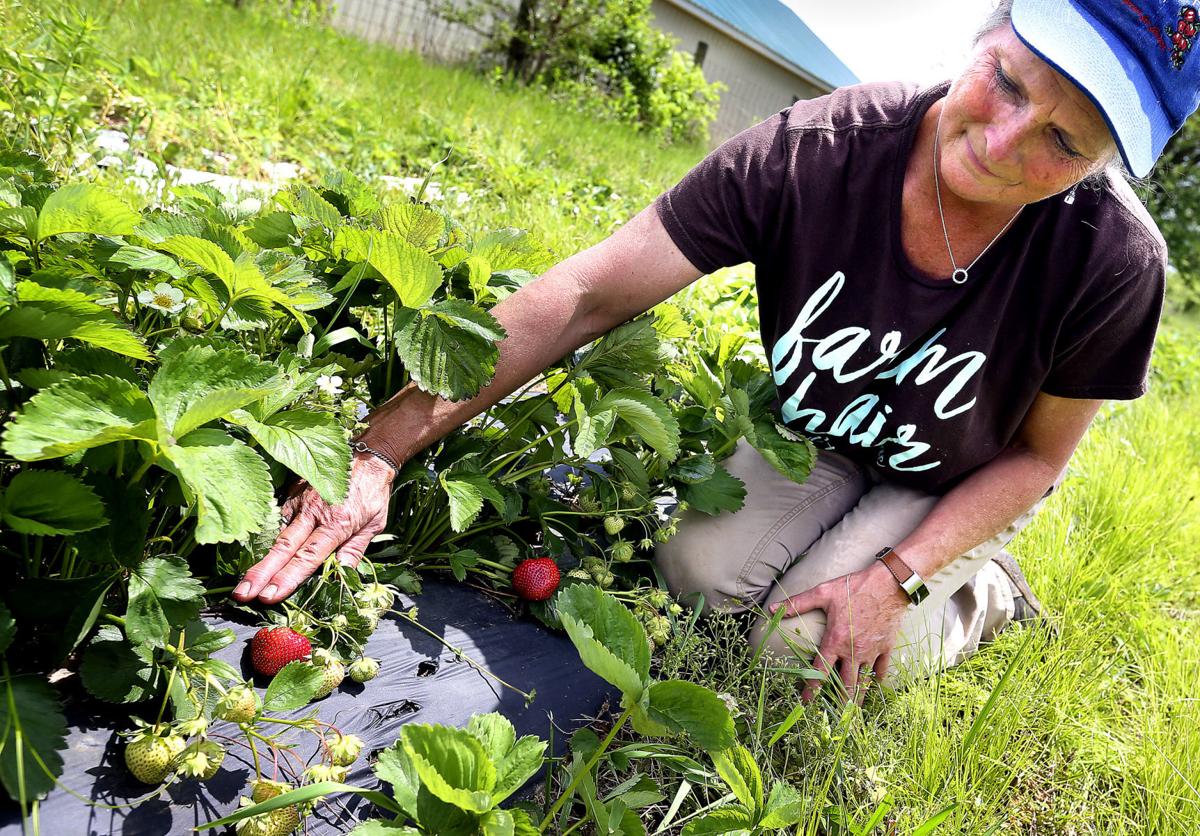 Lori Mackintosh pulls back leaves to reveal ripening strawberries on her Mackintosh Fruit Farm on Russell Road in Clarke County.

Lori Mackintosh, of Mackintosh Fruit Farm in Clarke County, stands in the farm's strawberry field with a large strawberry she picked moments before eating it.

Bill and Lori Mackintosh step over the raised beds of their strawberry plants as they check the strawberry field on their Mackintosh Fruit Farm on Russell Road in Clarke County. .

Lori Mackintosh pulls back leaves to reveal ripening strawberries on her Mackintosh Fruit Farm on Russell Road in Clarke County.

BERRYVILLE — Strawberry season is a little late this year at Mackintosh Fruit Farm.

For the past few years, the family-run, pick-your-own produce operation in Clarke County has opened to customers for the season around May 10. But this year, weather conditions slowed the strawberry crop’s growth and pushed back the opening, tentatively set for Memorial Day on Monday.

If it doesn’t open then, it will soon, according to co-owners Bill and Lori Mackintosh.

Fluctuating temperatures and rain largely are to blame for the delay.

“You need warm temperatures to bring them on,” Bill Mackintosh said, referring to the ripening of strawberries. “When you have cold days ... it really slows them down.”

Mainly, though, “there’s been too much rain,” he said, and that kept the “plug plants” — seedlings germinated and grown in plastic trays for eventual transplant — from being placed in the ground for a while.

Strawberries now are appearing on the vines.

“We’ll have a good crop of berries” this year, Mackintosh predicted. “They’ll be smaller, but they’ll be sweeter (because of the moisture). They’ll definitely taste good. They’ll taste more like the wild strawberries that people pick on the side of the road.”

According to its website, the farm grows only Chandler strawberries, which have a distinct sweetness and intense flavor. But this year, there are Camino Real strawberries growing, too. That variety is a little darker than many types of strawberries.

However, Chandlers are “much more forgiving” of changes in weather conditions, Mackintosh said. For that reason, he probably won’t grow Camino Reals anymore, he said.

The farm, on Russell Road about two miles off(Harry Byrd Highway (Va. 7) west of Berryville, includes 62 acres owned by the Mackintoshes plus some land on adjacent properties which they lease. Mackintosh estimated the farm will have 1½ to 2 acres of strawberries this year, compared to 2½ to 3 acres in some years.

Vegetables as well as fruits are grown and sold at the farm. Along with strawberries, fruits grown throughout the course of a year include blueberries, black and red raspberries, blackberries, apples, pears, yellow and white peaches, tomatoes and pumpkins. Vegetables grown include cucumbers, lettuce, asparagus, squash, broccoli, onions, corn, sweet potatoes and peppers.

Anyone who doesn’t want to risk getting sweaty or dirty in the fields can buy produce already picked at the farm’s market.

“We’ve tried to keep ahead of trends and plant things we know people are going to be excited about,” Mackintosh said, such as new varieties of produce.

An example he mentioned is EverCrisp apples. Developed several years ago by the Midwest Apple Improvement Association, they’re a cross between the Honeycrisp and Fuji varieties, he said, and “they’re the talk of the town in the apple industry.”

“It’s a big, beautiful apple with a pretty decent texture,” Mackintosh said. And it seems like “it stores forever. You can leave it on the table for a month” and it will be just as fresh as apples picked more recently.

Apple season in Virginia generally is at its peak from late summer to mid-autumn. Mackintosh said he expects the EverCrisps to be ready for picking around Oct. 15.

Nevertheless, strawberries are what gets people excited about picking their own fruits and vegetables.

“We love seeing young families” come out to the farm, Mackintosh said.

But despite their popularity, “strawberries aren’t much of a moneymaker,” Mackintosh admitted. “They’re almost a loss-leader.”

They’re an expensive crop to raise, he said, because of factors such as needing special equipment to make raised beds as well as needing both above-ground and underground irrigation. Above-ground watering helps protect young plants from frost early in the year.

“If you can make money off strawberries, you’re a darn good manager,” he said with a chuckle.

Mackintosh also said that in terms of retail prices, pick-your-own growers like himself can’t compete with strawberries sold in supermarkets that have been grown and packaged by even larger producers. To his knowledge, most store-bought strawberries sold locally are from California, with some being from North Carolina.

What benefits him and other Virginia growers is that “our soil allows us to grow some that taste really good,” he said. Ultimately, it’s the taste that attracts customers.

As long as there’s a Mackintosh Fruit Farm, strawberries will be grown there, he pledged, for two reasons: They’re popular, and they entice customers back to buy other fruits and vegetables later in the year.