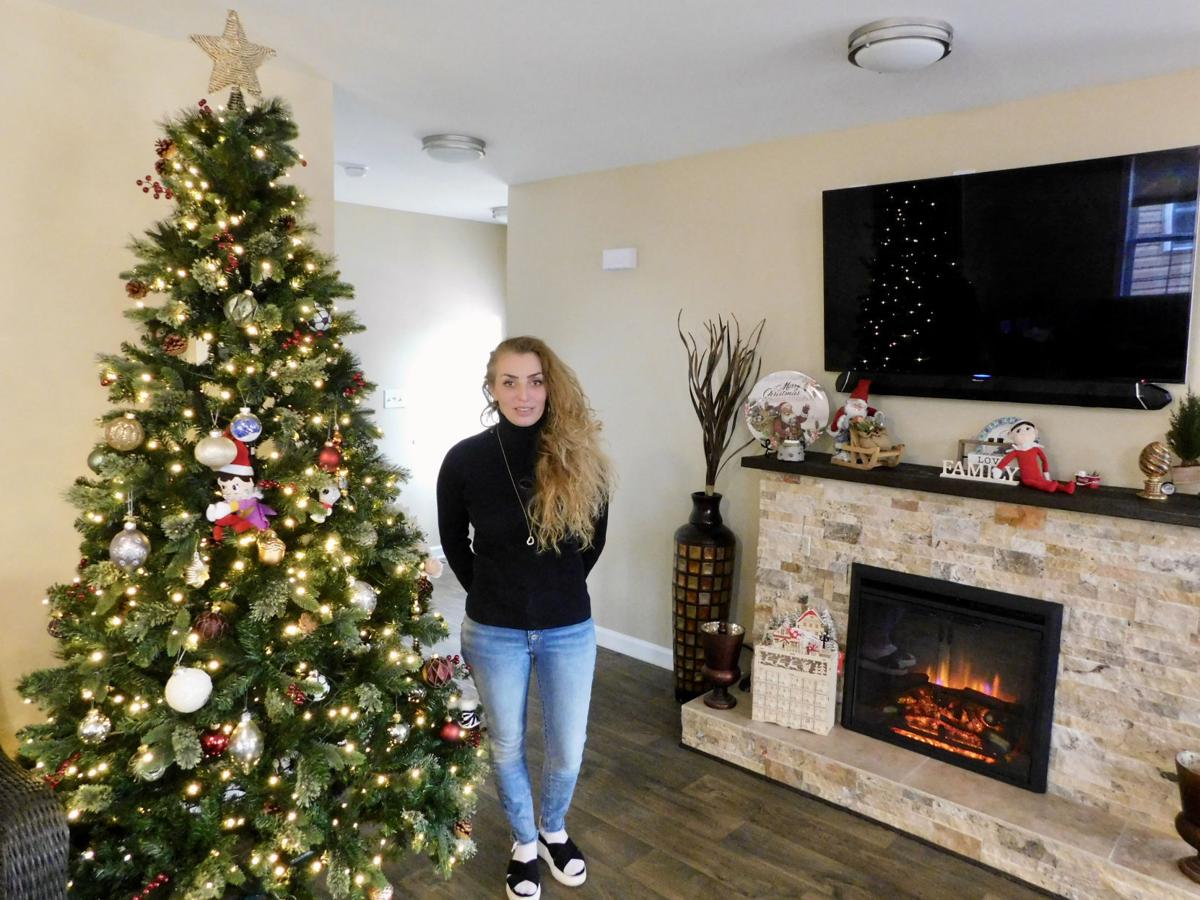 Liliya El Abani, a native of Bulgaria, stands in the Baker Street home she shares with her three children. At right is a fireplace that she installed with her father shortly after moving into the home in August. Blue Ridge Habitat for Humanity helped the family buy the house after Liliya’s husband, Wyle El Abani, died of cancer three years ago. 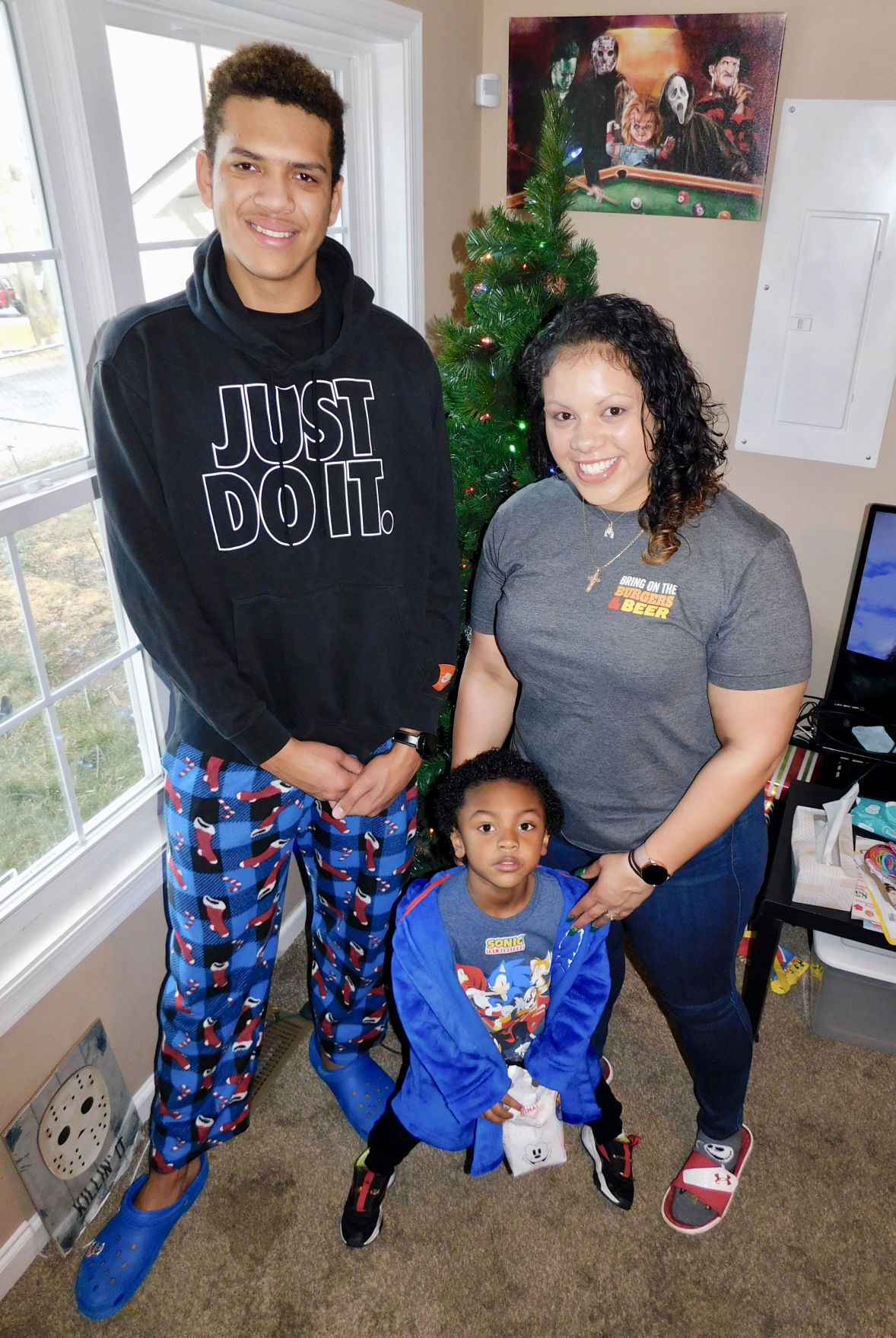 Jasmine Edwards (right) and her two sons, 17-year-old Marquise and 3-year-old Zachary, stand in front of the Christmas tree in their Winchester home that they acquired with assistance from the nonprofit Blue Ridge Habitat for Humanity. Jasmine said she had to settle for an artificial tree this year due to local shortages of real Christmas trees. 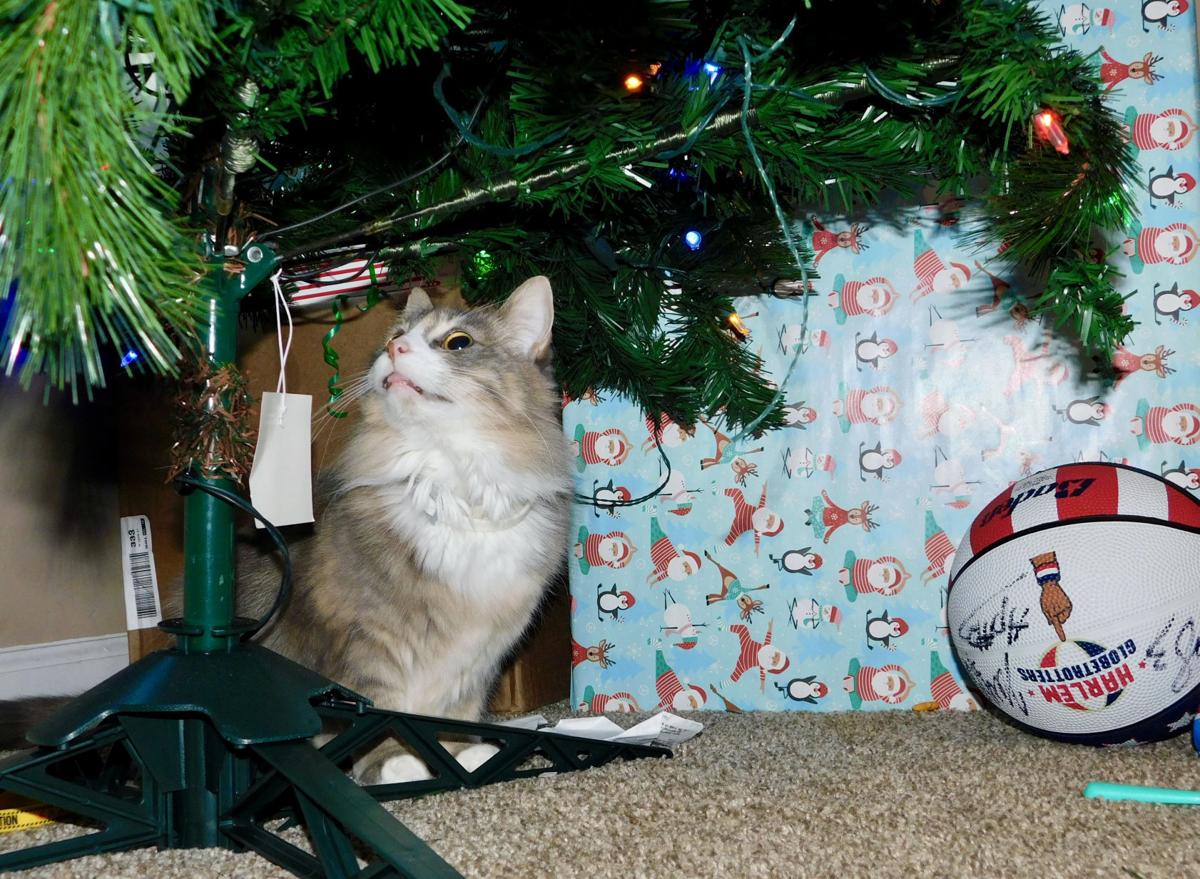 Raindance the rescue cat fights the temptation to climb the artificial tree in Jasmine Edwards’ Winchester home. Jasmine said one of the best things about owning her own home is that she can have pets without having to pay a hefty deposit to a landlord.

Liliya El Abani, a native of Bulgaria, stands in the Baker Street home she shares with her three children. At right is a fireplace that she installed with her father shortly after moving into the home in August. Blue Ridge Habitat for Humanity helped the family buy the house after Liliya’s husband, Wyle El Abani, died of cancer three years ago.

Jasmine Edwards (right) and her two sons, 17-year-old Marquise and 3-year-old Zachary, stand in front of the Christmas tree in their Winchester home that they acquired with assistance from the nonprofit Blue Ridge Habitat for Humanity. Jasmine said she had to settle for an artificial tree this year due to local shortages of real Christmas trees.

Raindance the rescue cat fights the temptation to climb the artificial tree in Jasmine Edwards’ Winchester home. Jasmine said one of the best things about owning her own home is that she can have pets without having to pay a hefty deposit to a landlord.

WINCHESTER — No one has greater appreciation of the phrase “There’s no place like home for the holidays” than a person who hasn’t always known if they would have a home at Christmas.

Take, for example, Karen Burrough, a single woman raising four children in a rented home that her landlord is eager to sell.

Or Jasmine Edwards, the mother of two boys who once was forced to live out of her car because she couldn’t afford a home.

Or Liliya El Abani, an attorney who fled war-torn Libya with her family and had to start over from scratch in the United States.

Fortunately, the Winchester-based nonprofit Blue Ridge Habitat for Humanity was there to help all three of these women build a brighter future by putting them in quality, affordable homes.

Today, with Christmas just hours away, Karen, Jasmine and Liliya reflect on their difficult journeys from housing instability to having a home of their own for the holidays.

Karen Burrough hasn’t moved into her own home yet, but she already knows how she’ll decorate it for her first Christmas.

“We’re going to have a real tree, nothing artificial, because I want the smell of Christmas,” she said. “And I’m definitely going to decorate every year. My stepdad was an electrician so he has a tall ladder that can reach the roof. It’s going to be decked out, for sure.”

In a little more than a year, Karen will be moving into a new home to be constructed in Norris Village II, a conglomeration of Habitat-built houses along West Lane in Winchester’s North End. Even though her house isn’t expected to be ready until 2023, she’s already putting in her “sweat equity” — a requirement of Habitat that obligates clients to contribute to the building of their own homes.

In some cases, including Karen’s, it’s not always possible for clients to participate in the construction process, so there are other ways they can complete the required 250 hours of sweat equity. For example, Karen is taking classes on financial management, assisting with the building of another Habitat home in Strasburg, attending events that offer advice on home repairs and improvements, and preparing a will to ensure that when the time comes, her home will be passed down to her children.

“I have almost 100 hours already,” she said about her sweat equity.

Karen, a single parent raising four children whose ages range from 3 to 12, came to Habitat because she couldn’t buy a home on her own. She had applied for traditional mortgages but, even though she earned a steady income, was denied due to her student loan debt.

Karen and her kids are currently living in a rented home in Strasburg. It’s a perfectly fine house, but her landlords want to sell it and she can’t buy it. Fortunately, her landlords are understanding of her situation and have agreed to let her stay there until she can move into her new Habitat home in Winchester.

Karen said she can’t wait to celebrate her first Christmas in a home that has her name on the mortgage.

Jasmine Edwards, a single mother with two boys ages 3 and 17, earns good money as a restaurant server, but most of her income is derived from tips. When she tried to get a mortgage to buy a house, financiers would only consider her hourly wage of $2.13 and would not approve her for a loan.

That left Jasmine with no choice but to rent, and her monthly rental payments were so high, she couldn’t save any money. At one point before the birth of her second son, Zachary, she and her eldest, Marquise, were in between apartments and had to live out of their car for several weeks.

Fortunately, Jasmine connected with Blue Ridge Habitat for Humanity and moved into her own home next to Norris Village II last year. This will be her second Christmas there with the kids.

“It’s just going to be us,” Jasmine said. “We’re going to spend the whole day at home.”

She’ll be waiting downstairs for the boys on Christmas morning, eager to watch them open the gifts that Santa will leave for them beneath the tree.

“Then we’re going to make cookies and watch Christmas movies,” Jasmine said. “And I’ve got a closet full of board games so we can play all day.”

Zachary said he’s hoping for snow so he can see a snowman on Christmas Day. When the 3-year-old was asked if he would go outside to build his own snowman in the backyard, he said, “No, it’s cold.”

Liliya El Abani was an attorney in her native Bulgaria who fell in love with a Middle Eastern man named Wyle El Abani. They were raising a family in Libya but had to flee in 2011 when a civil war that ultimately overthrew dictator Muammar Gaddafi made the country too dangerous for children.

The El Abanis wound up in Winchester but, since Liliya’s law degree was from Europe, she could not practice law in the United States. Instead, she took a retail job at the T.J. Maxx department store in Winchester while her husband launched a transportation company, Win Transport Corp.

“He was a really nice husband, the best one you can imagine,” Liliya said of Wyle. “He always took care of us.”

Right when their fledgling family business was starting to turn a profit, Wyle was diagnosed with cancer. He died on Dec. 29, 2018, leaving his heartbroken wife to raise their three children alone in a foreign country.

“When I lost him, it was like I died,” Liliya said. “I had $350 in my bank account, but I had to fight so they would have a good future. As parents, we have to be a good example for our kids.”

The transportation company had gone out of business during Wyle’s battle with cancer, so Liliya’s only source of income was the weekly paycheck from her full-time job at T.J. Maxx.

Last year, a friend encouraged her to contact Blue Ridge Habitat for Humanity to see if the nonprofit could help her buy a home with a lower monthly mortgage payment than what she was paying in rent.

On June 12, 2020 — her husband’s birthday — Liliya was told she had been accepted into Habitat’s homeownership program. The news was so good and the timing so perfect, her kids worried she had misunderstood what the Habitat representative said and insisted on coming along when she signed the documents.

Liliya immediately started putting in her sweat equity hours, working at Habitat’s retail outlet, ReStore at 400 Battaile Drive in Winchester, and assisting with the construction of her new house on Baker Lane that’s right across the street from Jasmine and one block away from where Karen will be living in 2023.

“I loved to work with the guys [on the construction crew],” Liliya said. “They were so nice. They taught me a lot of things.”

That knowledge came in handy when Liliya and her kids moved into the house in August. With help from her dad, who came from Bulgaria with his wife to be with their daughter and grandchildren, Liliya installed an electric fireplace with a stone mantle and a decorative backsplash on the kitchen walls.

The fireplace is currently adorned with holiday decorations. Next to it is a tall, beautiful Christmas tree that sparkles with brilliant white lights.

On Christmas Day, Liliya said her parents will come over and she, the kids and family dog Zeus will open gifts and enjoy a holiday feast.

“It’s going to be an amazing Christmas,” she said. “I can’t believe we got to this point.”

Liliya still cries when she talks about her husband, but her tears dissipate whenever she thinks about the future she has worked so hard to secure for her children.

And one more thing: Daliya was just awarded a full four-year scholarship to Yale University in Connecticut.

“It’s amazing,” Liliya said. “You can’t believe how happy I am.”

Good new all around, a wish to a happy and prosperous new year for the families in this story.