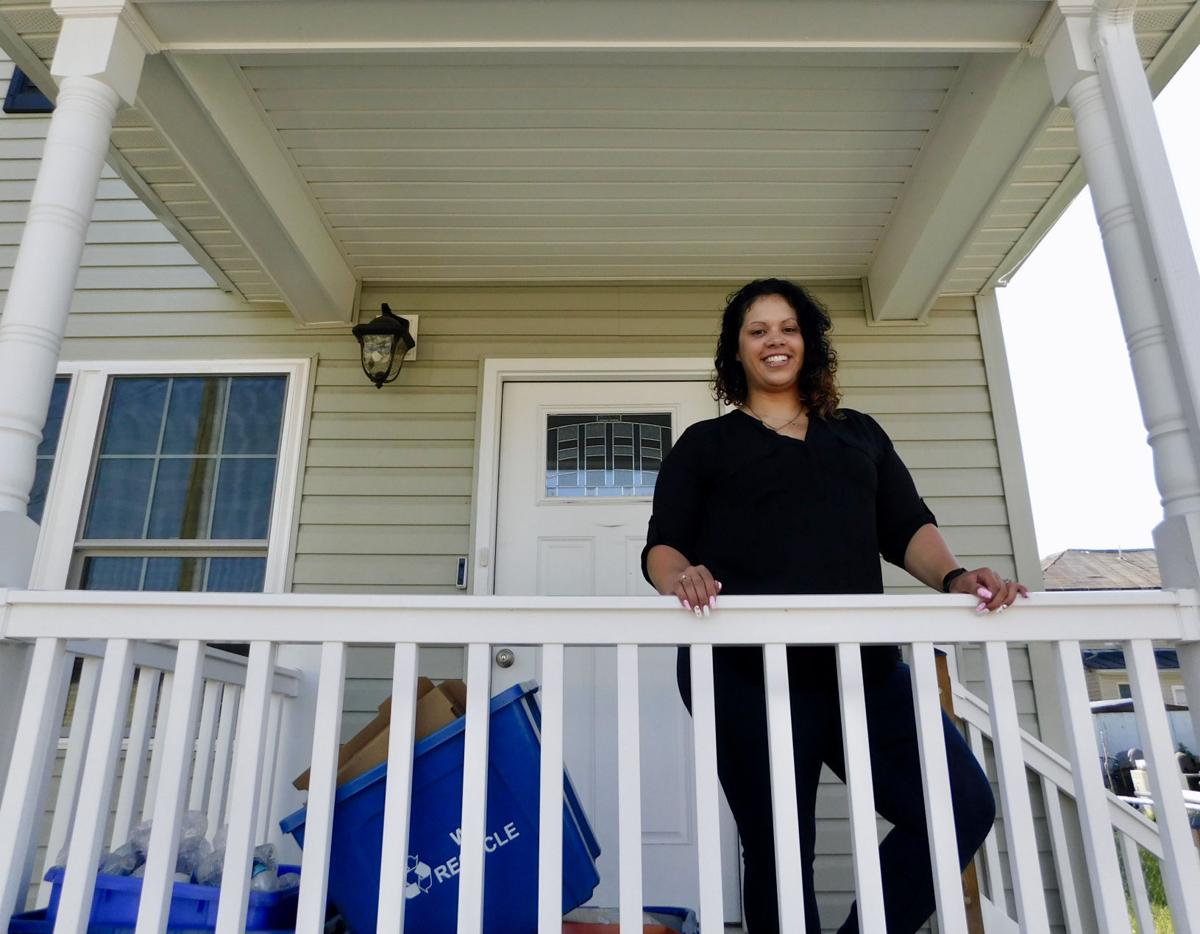 Jasmine Edwards stands at the entrance to her Winchester home on Friday morning. After renting for most of her adult life, Edwards and her two children, ages 3 and 17, were able to buy their own house thanks to assistance from Blue Ridge Habitat for Humanity in Winchester. Edwards said it's wonderful to have pets without worrying about a landlord charging her extra for the privilege. 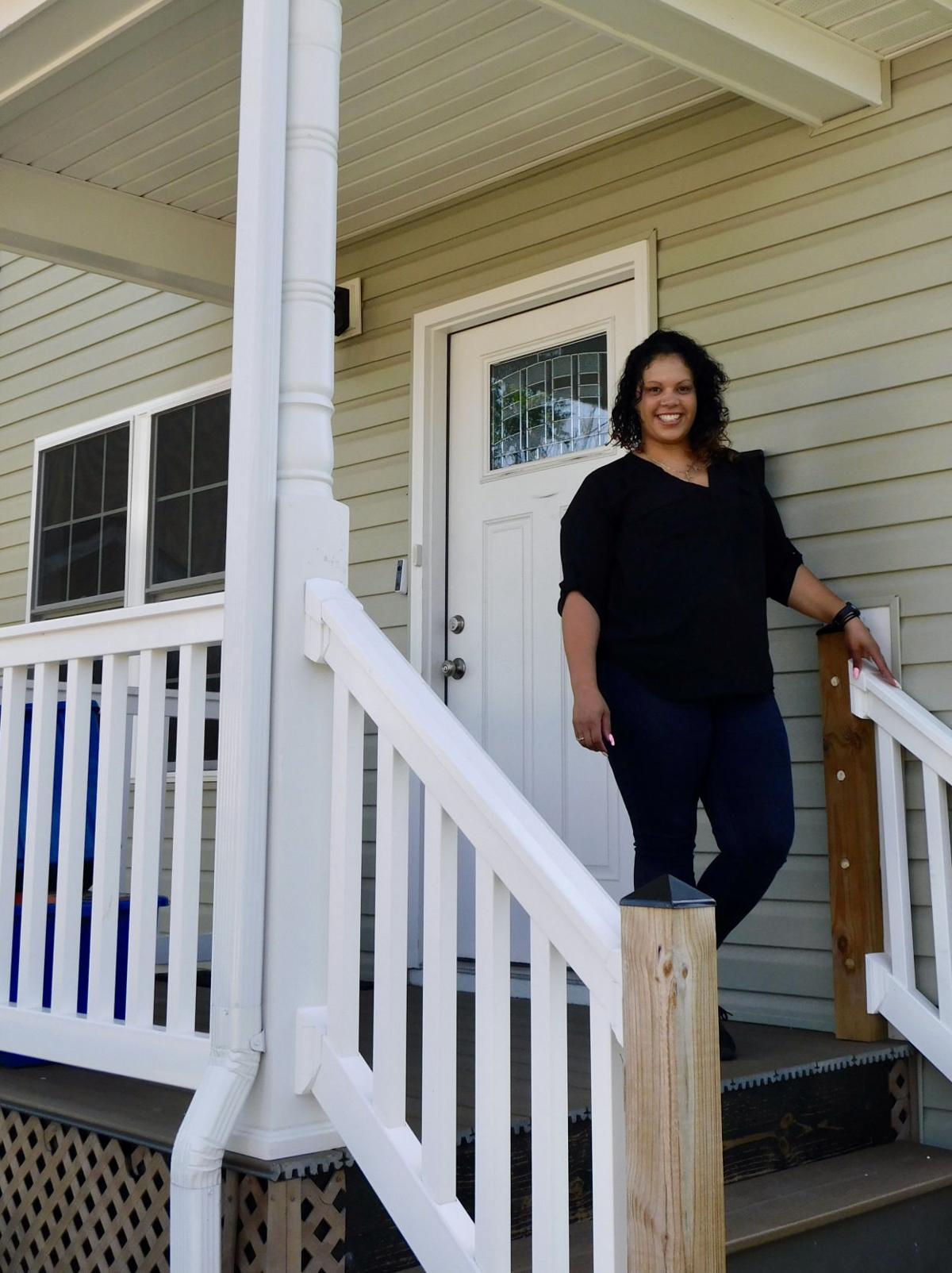 Jasmine Edwards, a single mother of two children, stands on the porch of the Winchester home she was able to buy in 2019 thanks to assistance from Blue Ridge Habitat for Humanity. After years of renting and a brief period of homelessness, this is the first home Edwards has ever owned.

Jasmine Edwards stands at the entrance to her Winchester home on Friday morning. After renting for most of her adult life, Edwards and her two children, ages 3 and 17, were able to buy their own house thanks to assistance from Blue Ridge Habitat for Humanity in Winchester. Edwards said it's wonderful to have pets without worrying about a landlord charging her extra for the privilege.

Jasmine Edwards, a single mother of two children, stands on the porch of the Winchester home she was able to buy in 2019 thanks to assistance from Blue Ridge Habitat for Humanity. After years of renting and a brief period of homelessness, this is the first home Edwards has ever owned.

WINCHESTER — For most of her adult life, Jasmine Edwards was caught in a financial spiral she could not escape.

She received decent tips as a restaurant server, but creditors only looked at her hourly wage of $2.13 on paycheck stubs and said she didn't earn enough to qualify for a home loan. That left her with no choice but to live with family or rent, but with monthly rental rates for small apartments, townhouses and single-family homes in the Winchester area averaging about $1,100 a month, the single mother couldn't save any money that she could one day put toward buying a house.

At one point, before Edwards gave birth to her second child, she and her firstborn lived out of their car for a couple of weeks.

"It's not what I wanted for my son, sleeping in the car at a Virginia rest stop and different places," she said during an interview on Wednesday. "It wasn't for a long time, but it was long enough to know that I had to do better."

Better times arrived nearly two years ago when Edwards and her two children, now ages 17 and 3, moved into the very first home they could call their own.

June is National Homeownership Month, an opportunity for people to discover the benefits of buying a house.

Two years after moving into her home, Edwards still gets excited over things like changing HVAC filters because she knows she's caring for her own home.

"Such a homeowner type of thing, right?" she said.

Edwards was able to escape the rental cycle thanks to Blue Ridge Habitat for Humanity in Winchester, a nonprofit that helps put low-income individuals into their own modest homes. A requirement for Habitat clients is that they contribute "sweat equity," meaning prospective owners must work alongside Habitat volunteers to physically build or renovate their future homes. That keeps construction costs down and results in lower monthly mortgage payments that Edwards and others who live paycheck to paycheck can afford.

"I put a lot of hours into my house," Edwards said with pride before adding that she also helped to build her neighbor's home, which was constructed with support from Blue Ridge Habitat for Humanity.

According to Kim Herbstritt, executive director of Blue Ridge Habitat at 400 Battaile Drive, home ownership leads to higher graduation rates and better health while decreasing childhood behavioral problems and reliance on government assistance. Also, homeowners are investing in a house they can one day sell, so owning and properly maintaining a home provides a pathway out of poverty.

There are other perks that people sometimes overlook. For example, Edwards is an animal lover who had trouble finding rentals that would allow her to keep a pet unless she was willing to pay an extra security deposit of several hundred dollars. Now that she owns her own home, she doesn't have to worry about a landlord walking in and telling her she can't have a cat or a dog.

"It's a beautiful thing to let my dogs outside with no issues," she said while watching her two pups sniff around her fenced-in backyard. "And I've got a cat inside and no one's telling me that I have to pay $250 extra."

One of the biggest pitfalls to owning versus renting is that homeowners, not landlords, are responsible for paying for any necessary home repairs, such as a leaky roof or broken hot water heater. Edwards said she occasionally worries about that, but for now, her mortgage payments are low enough that she can build a nest egg for when she has to pay for repairs.

That probably won't happen for awhile, though. Edwards' house and everything in it is just two years old, and Blue Ridge Habitat made sure to demonstrate how to properly maintain the property. For example, Habitat representatives told her when and how to replace her HVAC air filters.

"I'm being good and taking care of everything," Edwards said.

Best of all, her children are thriving.

"It's nice to see [the 3-year-old] run up the steps and make a mess in his own room because we didn't have an extra room for him at the last place," Edwards said. "My teenager for his birthday asked, 'Mom, can we just do something at the house?' For him to be OK with having friends come over and wanting to show off his home, that was a sense of pride."

To learn more about Blue Ridge Habitat for Humanity and the ways it can help low-income people in the Winchester area buy their own homes, visit blueridgehabitat.org.

What a wonderful feeling to have a quiet place to retreat from the world. Thanks for this happy story. My best wishes to her!