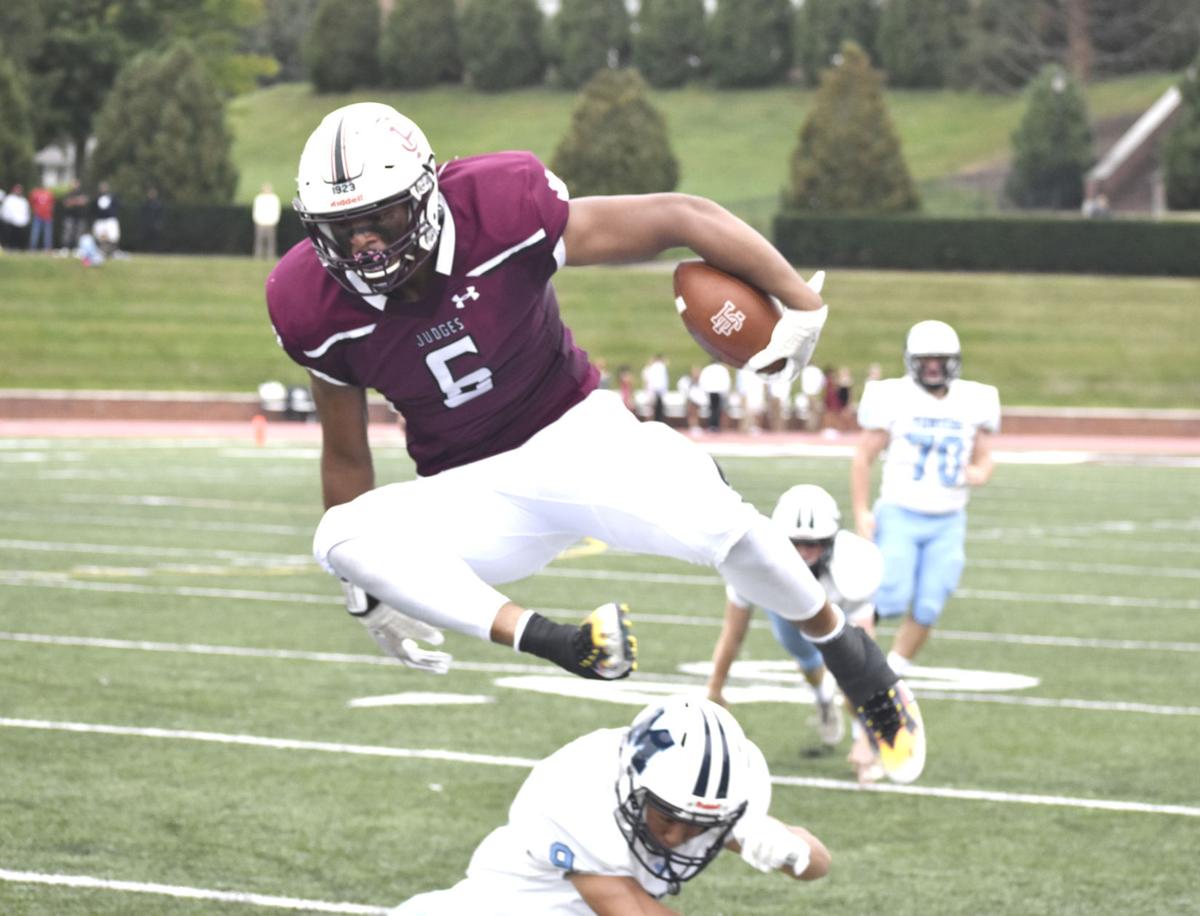 Handley’s Stephen Daley leaps over a Millbrook defender on a 15-yard run in the second quarter. Daley had 176 yards and two touchdowns rushing and caused a fumble that was recovered for a touchdown with one of his two sacks as the Judges beat Millbrook 36-18 on Saturday at James R. Wilkins Jr. Stadium. 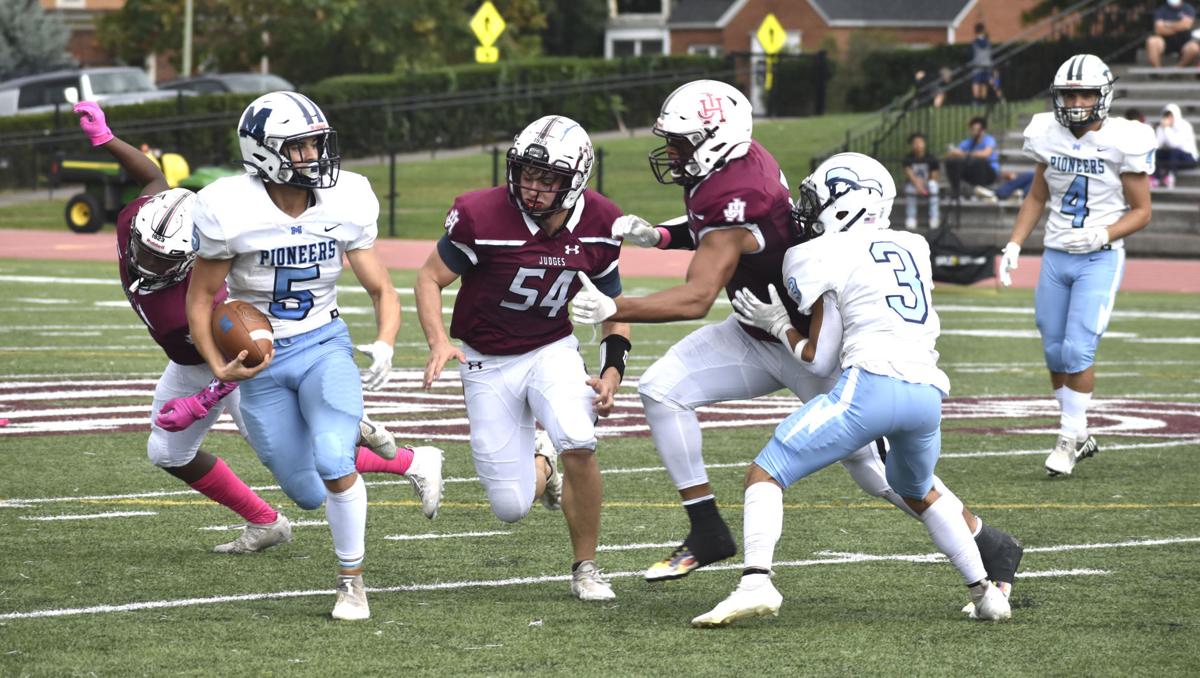 Millbrook’s CJ Standen is pursued on a second-quarter run by Handley’s Alex Barth (54) and Stephen Daley (right), who made the tackle. Standen had four catches for 133 yards and a TD and nine carries for 59 yards. 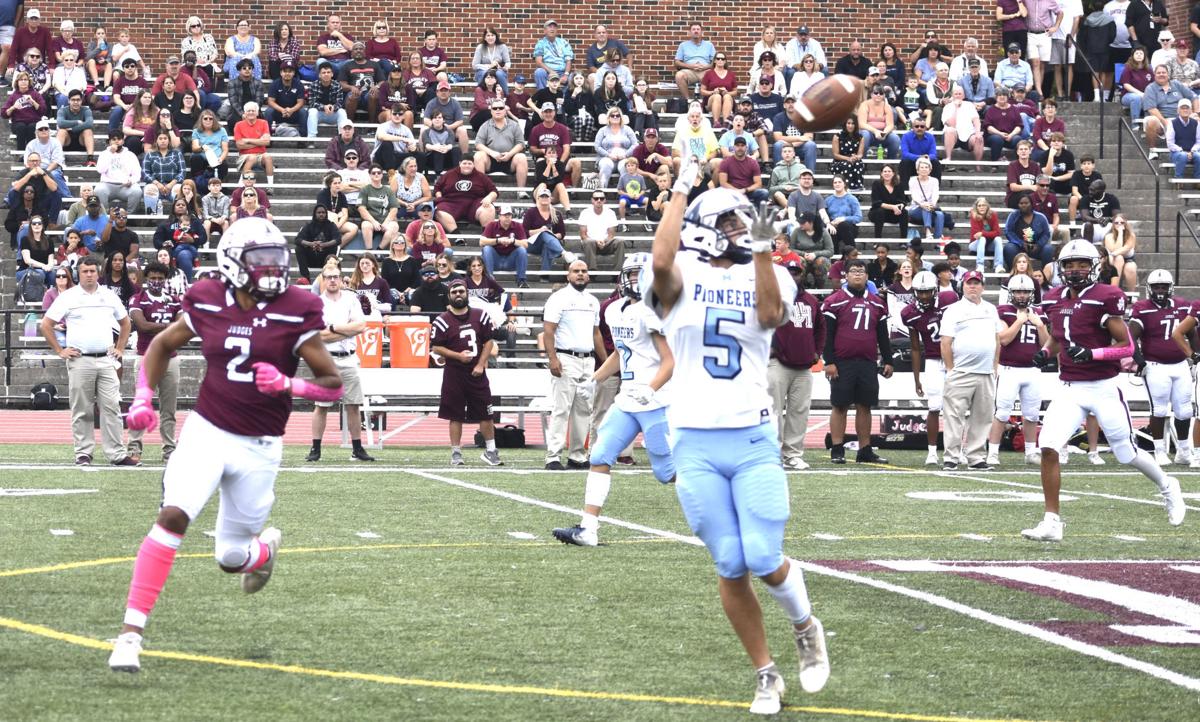 Handley’s Stephen Daley leaps over a Millbrook defender on a 15-yard run in the second quarter. Daley had 176 yards and two touchdowns rushing and caused a fumble that was recovered for a touchdown with one of his two sacks as the Judges beat Millbrook 36-18 on Saturday at James R. Wilkins Jr. Stadium.

Millbrook’s CJ Standen is pursued on a second-quarter run by Handley’s Alex Barth (54) and Stephen Daley (right), who made the tackle. Standen had four catches for 133 yards and a TD and nine carries for 59 yards.

WINCHESTER — Not a bad way to celebrate your first Homecoming in two years and first game against a Frederick County rival in two years.

Handley made big plays in all three phases of the game to beat Millbrook 36-18 and remain undefeated on Saturday in Class 4 Northwestern District action at James R. Wilkins Stadium.

A defense led by Stephen Daley (two sacks) scored the Judges’ second and fourth touchdowns, with Daley’s second sack producing a fumble recovery by Nas Nix in the end zone.

Daley led the offense with another huge rushing day, recording 176 yards on 15 carries and scoring the Judges’ first (four yards) and last (nine yards) touchdowns on the ground.

It wasn’t a perfect performance from Handley, but it was a satisfying one. The Judges were up 36-10 before Millbrook’s CJ Standen caught a 45-yard TD pass from Detric Brown with 27 seconds left.

“Millbrook’s local, so it just kind of feels good beating them by so much,” said senior wide receiver Jacob Duffy, whose 32-yard TD reception with 11 seconds left in the first half made it 23-3. “I think it kind of sets a tone for how good we are.”

After receiving the opening kickoff, Millbrook advanced the ball 17 yards to its own 41, but the drive stalled after six plays. The Pioneers then had a bad punt snap that Patrick Sigler couldn’t pick up with his hands, so the Millbrook soccer standout kicked the bouncing ball with his foot before anyone from Handley could pick it up.

Fusco scooped the ball up on a bounce 21 yards downfield at the Handley 38, and he sprinted all the way to the Millbrook 14. Two plays later, Daley ran the ball in from four yards out, and the first of three Bryce Pollak extra points made it 7-0 with 8:43 left in the first quarter.

Millbrook started its ensuing possession at its own 31. Brown (7 of 17 for 142 yards, one TD and two interceptions) threw left, and the safety Fusco picked it off at the 38 and cruised into the end zone to make it 13-0 with 8:25 left in the first quarter.

“I just read where he was looking,” Fusco said. “I only saw one receiver coming across the middle. As it came, I was just like, ‘it’s me or him time.’ I caught the ball, and I just ran.”

Millbrook responded on its next drive when Brown connected with Standen (four catches, 133 yards) for a 50-yard pass play to the Handley 16 while under heavy pressure. But the Pioneers caught a bad break when Brown was poked in the eye on the ensuing play, and three plays later Sigler’s 33-yard field goal attempt came up short.

After a 25-yard Pollak field goal made it 16-0 with 7:21 left in the second quarter, Standen did an excellent job running the Pioneers’ offense with eight carries for 55 yards on a 64-yard drive that ended with a Sigler 28-yard field goal to make it 16-3 with just 1:49 left in the half.

Handley made two huge plays to squelch any possible momentum the Pioneers might have had for the second half, though.

After fielding Sigler’s ensuing kickoff at the Handley 5, Deonte Trammel ran left and faked handing the ball to Duffy, who was running right. The fake fooled most of Millbrook’s kickoff team, and after avoiding a diving tackle attempt by the left sideline at Handley’s 28 Trammel ran 32 more yards for a 55-yard return. Earlier this year, Duffy had a 39-yard kickoff return against Skyline in which he received a handoff on a kickoff return, so that threat helped create Trammel’s big return.

Millbrook was one play away from making the return irrelevant. But on fourth-and-17 from the Pioneer 32, Davion Butler (5 of 6 for 52 yards) threw a ball to Duffy on a go route down the left sideline. Duffy was well-covered, but Duffy turned and caught the pass that was thrown slightly behind him as the defender dove to break it up. Duffy then turned toward the end zone, and his score and Pollak’s extra point made it 23-3.

“We’ve got to get better on the special teams,” Millbrook coach Josh Haymore said. “It’s hard to play defense when all they have to do is drive [14] yards and [40] yards.”

Daley then played a central role in putting the Judges up four scores. He sacked Brown — who returned to start the second half — by pushing through blockers up the middle for a nine-yard loss on second down, then came around the right side and chopped at Brown’s arm near the goal line to knock the ball away on third down. Nasir Nix recovered the ball in the end zone to set off a wild Handley celebration and make it 30-3.

“After he came off the edge, I saw [Brown] was getting ready to throw it,” Daley said. “When I hit, I knew it was out. I looked up to see if anyone was going to get it. When I saw Nas get it, I was happy for him.”

Daley was a load for Millbrook to deal with on defense. Haymore liked what he saw from his offensive line, which is relatively healthy again, but containing Daley is a tall order.

He had a massive hit on Brown two possessions earlier that resulted in the ball popping high into the air and being intercepted by Julius Darling, and he helped limit Millbrook to 115 yards on 42 carries.

On offense, Daley often ran through and dragged defenders with him.

“They can hand him the ball at any given time and he’s going to get chunks of yards,” Haymore said. “Our defense played really well at certain times. But [Daley] is the best player in the area. It’s a tough thing.”

Handley defensive coordinator Jim Gaynor — the Judges’ acting head coach on Saturday with Dan Jones serving a one-game suspension — said he liked that the Judges started fast, but he’d like to see more consistency from his team. For example, Gaynor didn’t like that Handley had to twice settle for field goals from Pollak in the red zone (the second one missed).

“I was happy with the two touchdowns on defense, but we’ve got to stop the run a little bit better,” said Gaynor, who added the Judges had a tough time adjusting to Standen taking snaps. “I’d like for us all to be consistent [in all phases of the game] the whole game long.

“It’s something we’ve talked about throughout the year. If we’re going to meet our goals, we’re going to have to play that perfect game all game long.”

With Saturday’s defeat, Millbrook is eliminated from the chase for the Barr-Lindon Crimson Apple, which is awarded by The Winchester Star to the team that fares best in Winchester-Frederick County games. Handley and James Wood are each 1-0 in the competition and Sherando is 1-1. The Pioneers are 0-2 in Barr-Lindon games.

Handley will try to eliminate Sherando from the competition next Saturday when the red-hot Warriors come to Wilkins Stadium. Sherando (4-3, 2-1 district) has won four straight games and has not lost to the Judges since 2010.