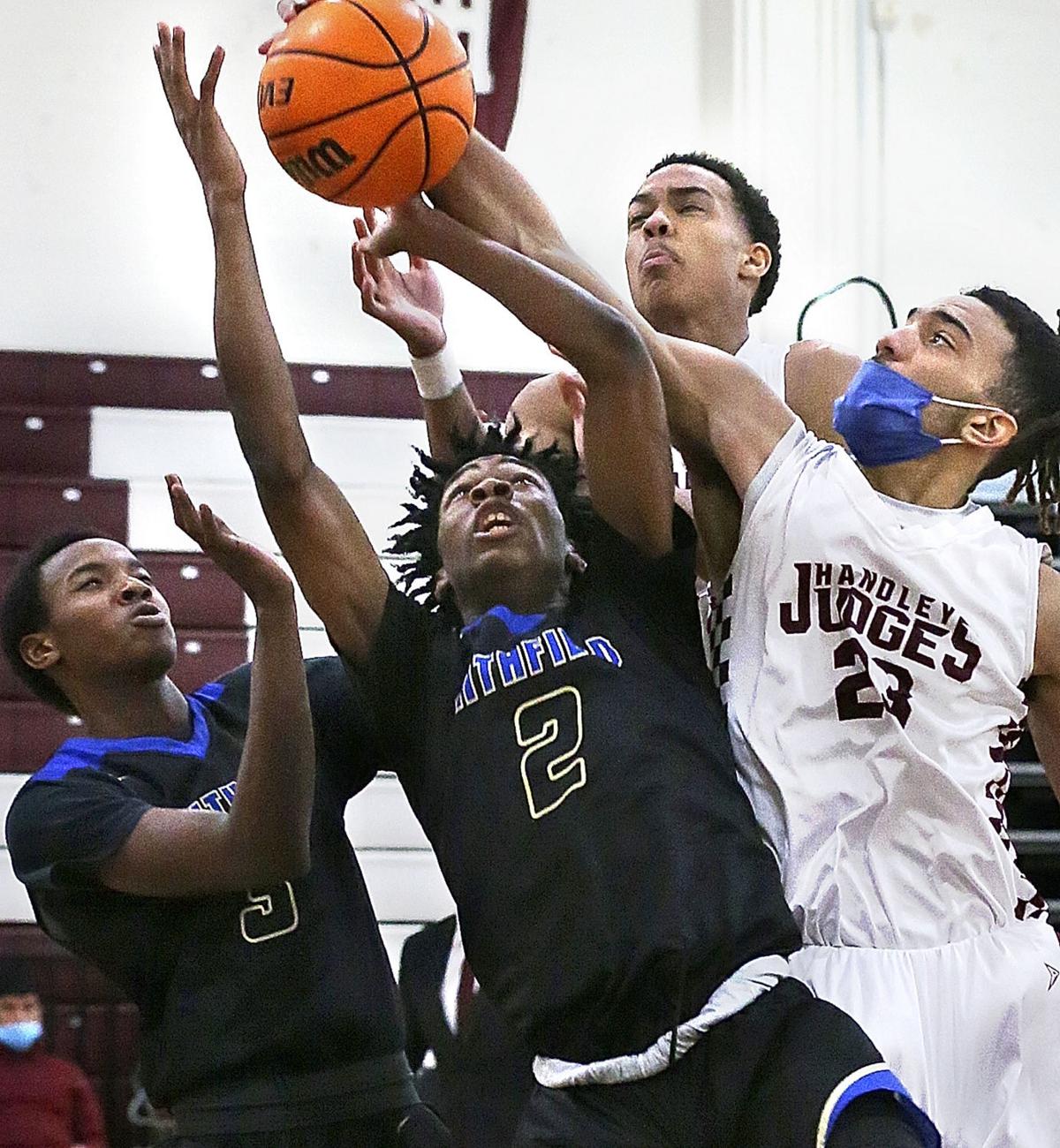 Handley’s Demitri Gardner (right) and Chaz Lattimore (back) battle against Smithfield’s Corey Moye (2) and Rashad Tucker (left) for a rebound during the Judges’ 61-54 loss to the Packers on Saturday in the Class 4 state title game. Smithfield won 61-54 at Handley’s Maddex-Omps Gymnasium to win their first state title and deny the Judges their first championship. 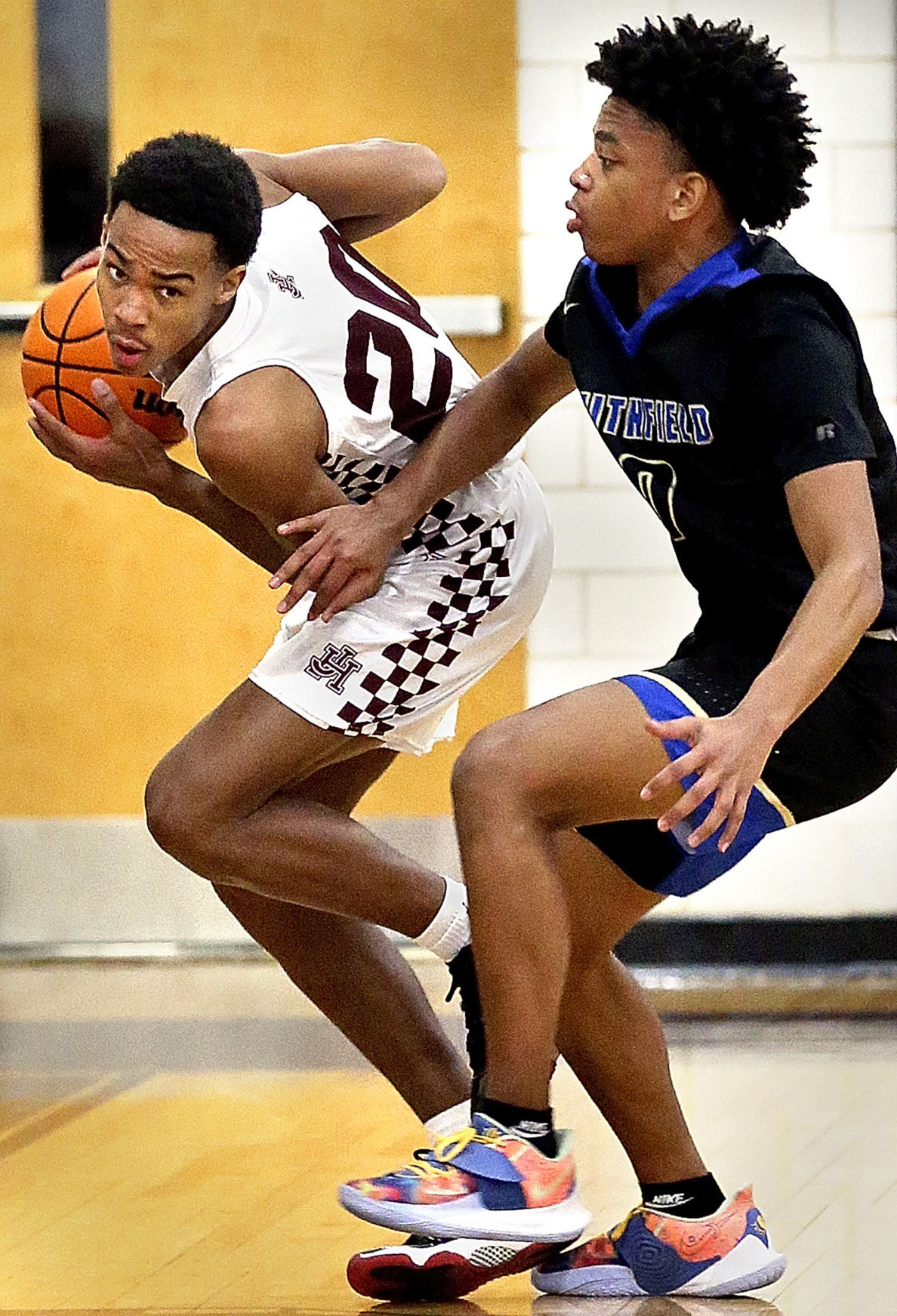 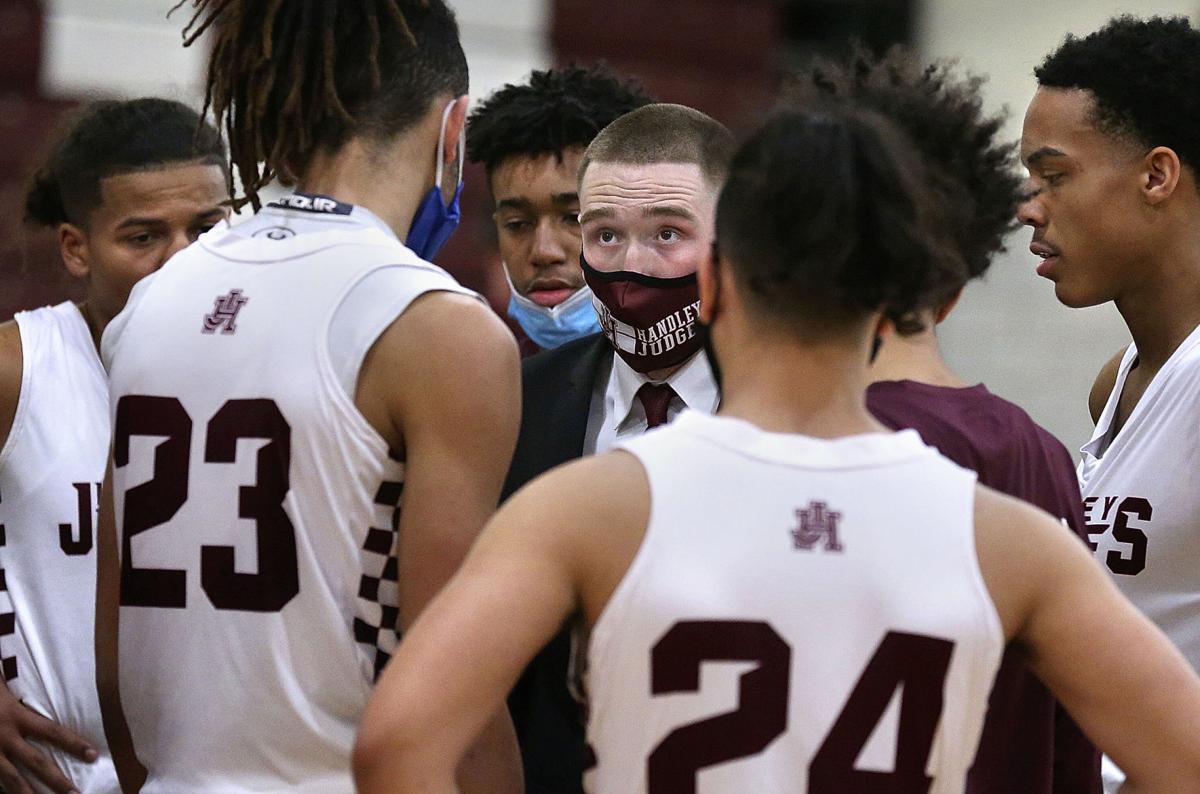 Handley boys’ basketball head coach Zach Harrell meets with his players during a timeout in the Class 4 title game against Smithfield on Saturday at Handley. 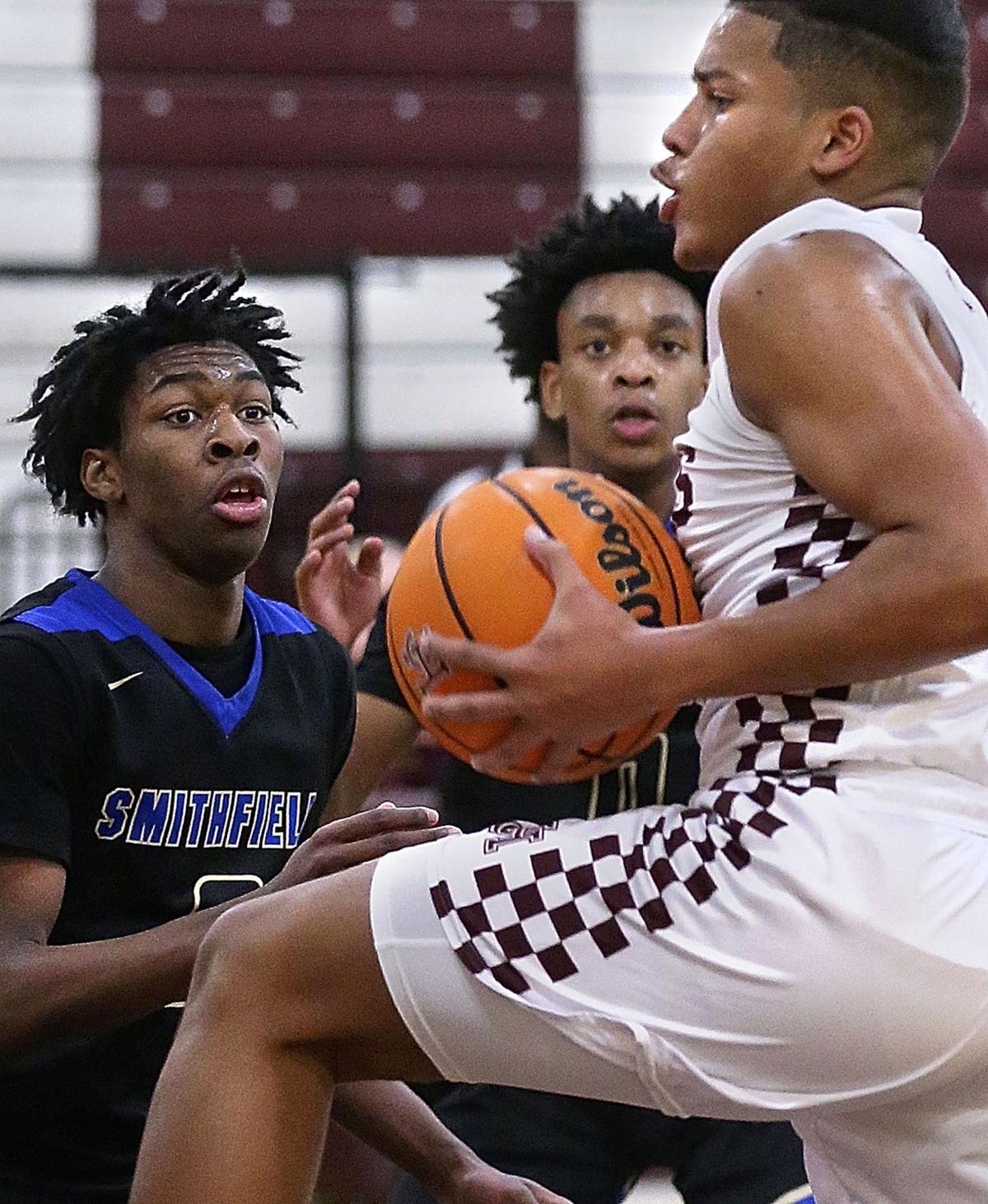 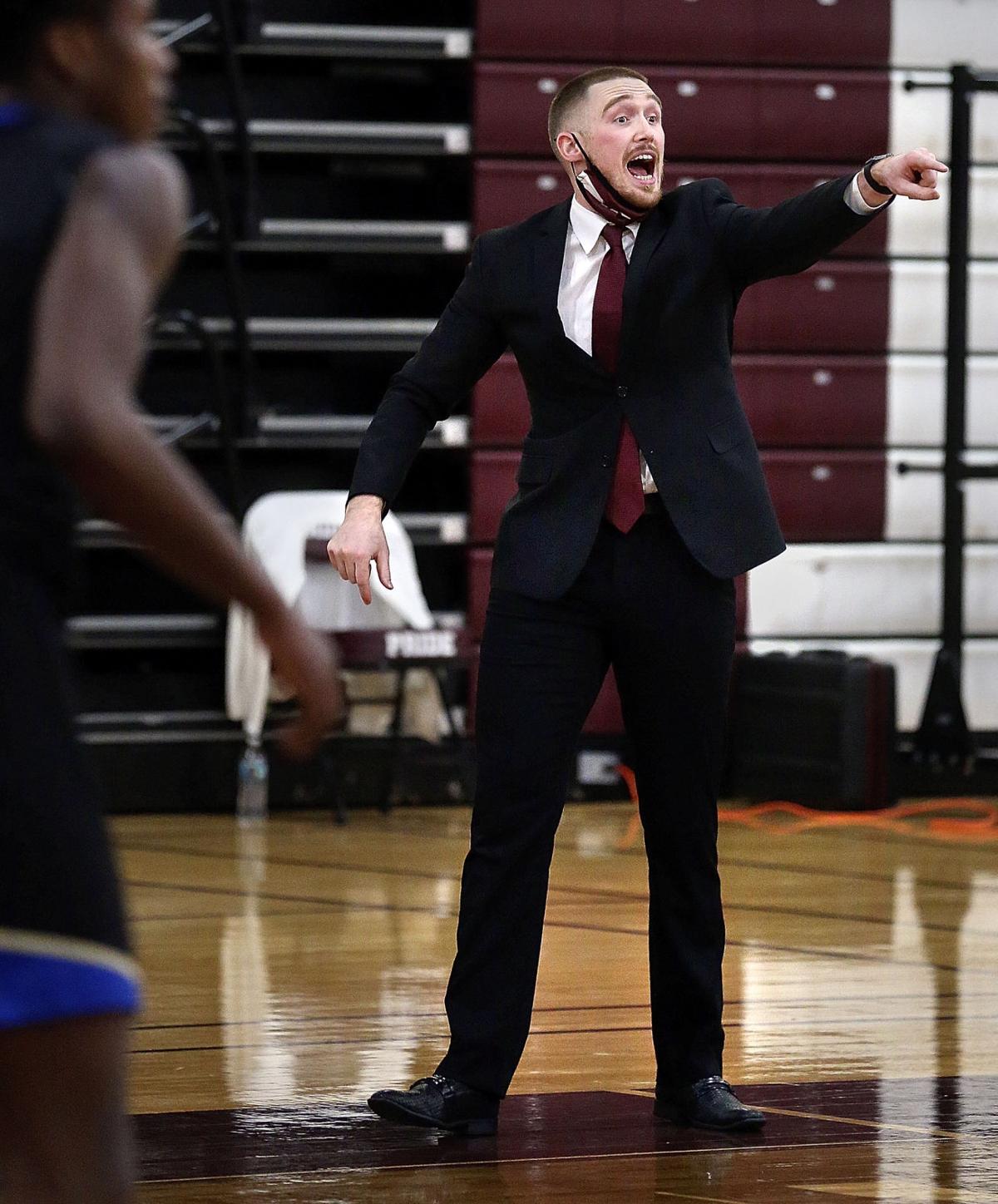 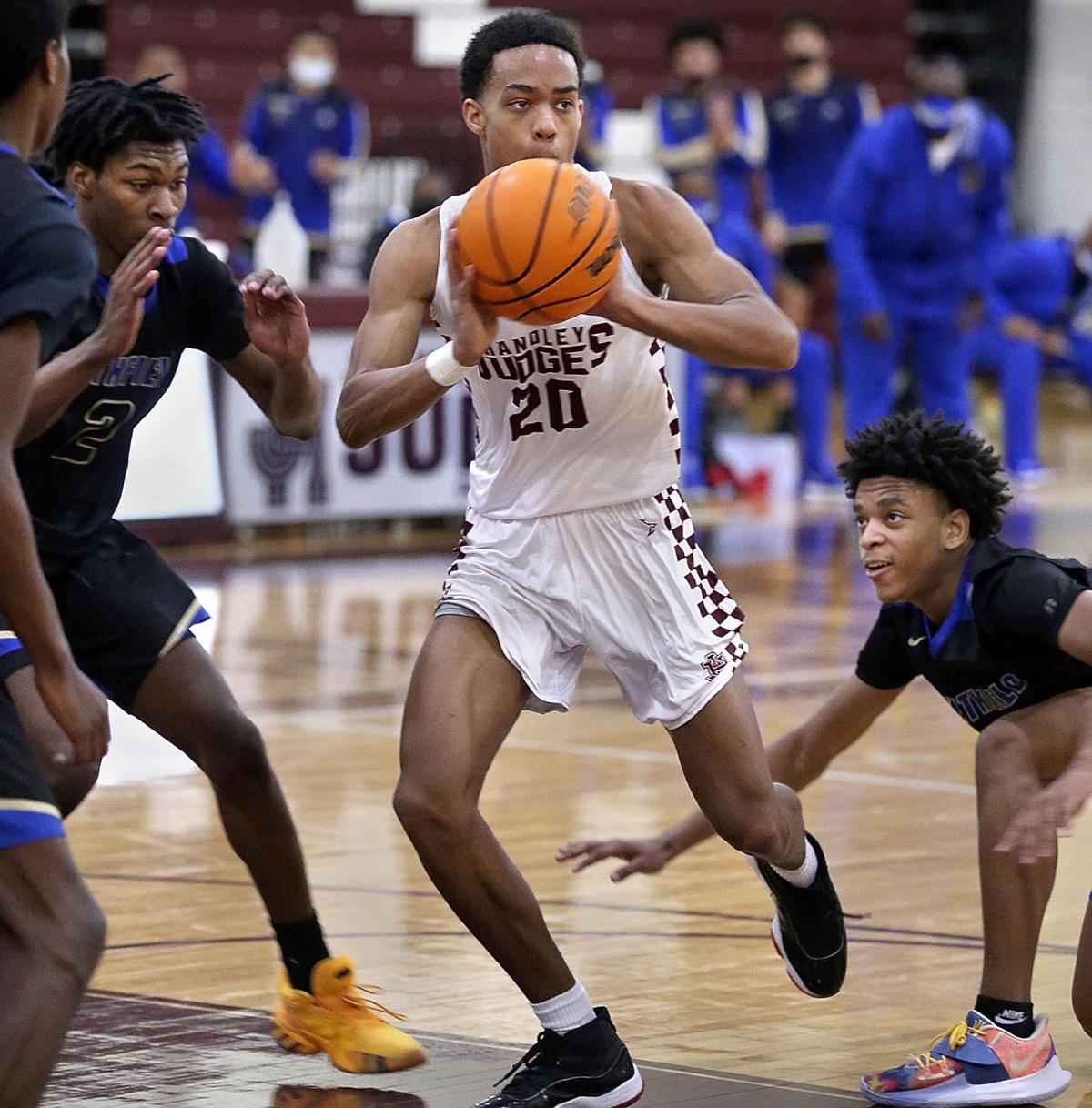 Handley’s Demitri Gardner (right) and Chaz Lattimore (back) battle against Smithfield’s Corey Moye (2) and Rashad Tucker (left) for a rebound during the Judges’ 61-54 loss to the Packers on Saturday in the Class 4 state title game. Smithfield won 61-54 at Handley’s Maddex-Omps Gymnasium to win their first state title and deny the Judges their first championship.

Handley boys’ basketball head coach Zach Harrell meets with his players during a timeout in the Class 4 title game against Smithfield on Saturday at Handley.

WINCHESTER — Perfection and a historic state title were up for grabs for both combatants on Saturday night at Maddex-Omps Gymnasium, and Smithfield seized the second half to add to Handley’s championship game heartbreak.

The Packers — who trailed by as much as 12 points in the first half — outscored Handley 46-25 over the last 17 minutes and 25 seconds to win the Class 4 boys’ basketball championship game.

Smithfield (10-0) — which graduated its first class in 1906 — captured its first state title in program history over a now 11-1 Handley team that was seeking the first state for its 97-year-old program. The Judges’ three state title game appearances since 2014 are more than any other program in Class 4, but Handley is still looking for its first title despite being in the driver’s seat at times in all three of those contests.

The Judges saw a 27-15 lead with 1:25 left in the first half shrink to 27-20 at halftime, but Handley felt very much in control as it made its way into its locker room.

“Early in the second half, they just wanted it more than us,” Handley senior guard Ke’Mani Curry said. “We had the lead at the half, and we got too comfortable.”

“The first half we had energy, the second half we just came out flat,” Handley senior guard Chaz Lattimore said. “[After the first half], we thought we had it in the bag.”

Smithfield never lost its hunger in the second half. Trailing 35-31 with 4:19 left in the third quarter, the Packers embarked on a 15-0 run that lasted until the 6:42 mark of the fourth quarter in which they took their first lead of the game. Smithfield led 46-35 after it was over, and its lead never dipped below six over the remainder of the game.

Handley missed all eight of its field goal attempts during that run. It was part of a second half in which the Judges shot 27.2 percent overall (9 of 33) and 13.3 percent from 3-point range (2 for 15) while committing 11 of their 18 turnovers.

The 6-foot-5 senior forward came in averaging 25.4 points per game, and he scored 14 points in the first half on 4-of-7 shooting (hitting one 3-pointer) from the floor and 5-of-6 shooting from the free throw line.

In the second half, the Packers limited Gardner to just five field goal attempts and four points until the final 40 seconds, when they were up 10 points.

“That kid is a hell of a player,” Porter said. “He dominated the ball a lot. The adjustment that we made was basically going to a box-and-one. I’m going to put my most fierce defenders on him, rotate a couple of guys on him, and make him play 84 feet every time he touched the ball.

“Just try to keep the ball out of his hands and make the other players play basketball. They had some open shots, but they took a few bad shots, and that allowed us to stretch the lead. Our brand of basketball is very relentless, and I think we just wore him down a bit.”

Markese Custis was the main person that Porter employed to guard Gardner.

“He’s a committed defender,” Porter said. “That’s his role, and he accepts that fully.”

Essentially, the entire Smithfield team did after Handley made 10 of 14 free throws and 8 of 20 field goals while attempting only three 3-pointers in the first half.

The Packers did a much better job of keeping Handley away from the rim and denying potential passes to Gardner, and the Judges couldn’t do much of anything from beyond the arc to make those tasks easier. Handley came in shooting 30 percent from 3-point range but missed its first nine 3-pointers in the second half.

“Our shots just didn’t fall at all,” Harrell said. “Some of them didn’t even hit the basket. In games like this, those have to fall. If they’re going to take away the drive and make adjustments, you’ve got to get it into the paint, kick it out, and shooters have to be makers. You have to knock those shots down. Credit to them for challenging those 3’s and outside shots.

“They were closing on us fast [on 3-pointers],” Curry said. “We haven’t played a team that closed on us that fast.”

A 3-pointer from Smithfield’s Rashad Tucker — who tied Corey Moye for the team lead in points with 20 — from the right corner made it 46-35 with 6:51 left.

From there, the Judges fought hard to mount a comeback.

“We never back down from anybody,” Lattimore said.

The Judges flew around on defense on themselves — using a half-court trap for a lengthy stretch — and forced seven of Smithfield’s 16 overall turnovers in the fourth quarter.

But the Packers always seemed to have an answer when they needed one. Aided by some transition baskets created by their defense, they made 16 of 28 shots after halftime following a 7-of-26 performance in the first half.

After the Judges were called for an illegal screen with the score 46-40, Kelby Saunders found Che Mullins with a pretty backdoor pass against the trap to start a 6-1 run that made it 52-41.

A missed Smithfield free throw on the front end of a one-and-one with 2:05 left — the Packers made only 3 of their last 10 free throws — gave Handley a chance to get even closer, but the Judges missed another 3-pointer on their next possession with just under two minutes left.

Handley never seriously threatened again, twice cutting its deficit to seven when Gardner had a traditional three-point play with 40 seconds left, then a 3-pointer to complete the scoring with two seconds left.

When it was over, Smithfield players were yelling and hugging and posing for pictures taken by their parents. Handley allowed parents for players on both teams to sit in the bleachers due to the special circumstances of Saturday’s game.

“We have eight seniors on this team, and we’ve worked hard,” said the senior Moye. “To win this is just a surreal feeling.”

Handley’s players have given everything they have as well, which is why their parents were urging them from the bleachers to keep their heads up as the players sat in their chairs prior to the state championship awards ceremony.

The Judges went 6-0 during the Class 4 Northwestern District regular season, then captured the district and Region 4C tournaments before beating Halifax County to advance to the state final.

Handley did not play its first game until Jan. 13. Winchester Public Schools announced in early December that it would delay participation in interscholastic sports until January due to COVID-19 concerns. (Virginia High School League basketball practice started on Dec. 7.) The school board voted on Jan. 7 to allow Handley to begin participating in VHSL athletics.

“It was a remarkable season,” Harrell said. “I told the guys after the game that the emotion that you’re feeling right now is an absolute privilege.

“Even though you’re sad and it hurts, it’s a privilege to feel this. If you handle adversity the right way and take things like this that hurt, if you handle it the right way, you can take it to a place you may have never been before.”

They’ll be missed by Harrell, and those players will miss playing at Handley.

While a lot of programs around the state experienced COVID-19 shutdowns, Curry said the Judges did everything they could to stay safe so they could have a season.

“I’m really proud of our team, because we really bought in,” Curry said. “We lived in like an NBA bubble. Everybody stayed home. No COVID cases on our team.

“We really were a good team. We thought we had [a state title].”

They’ll have the memories of a special season, though.

“We never took this season for granted,” Lattimore said. “We went to work and came to states. I’m glad to be with my brothers.”