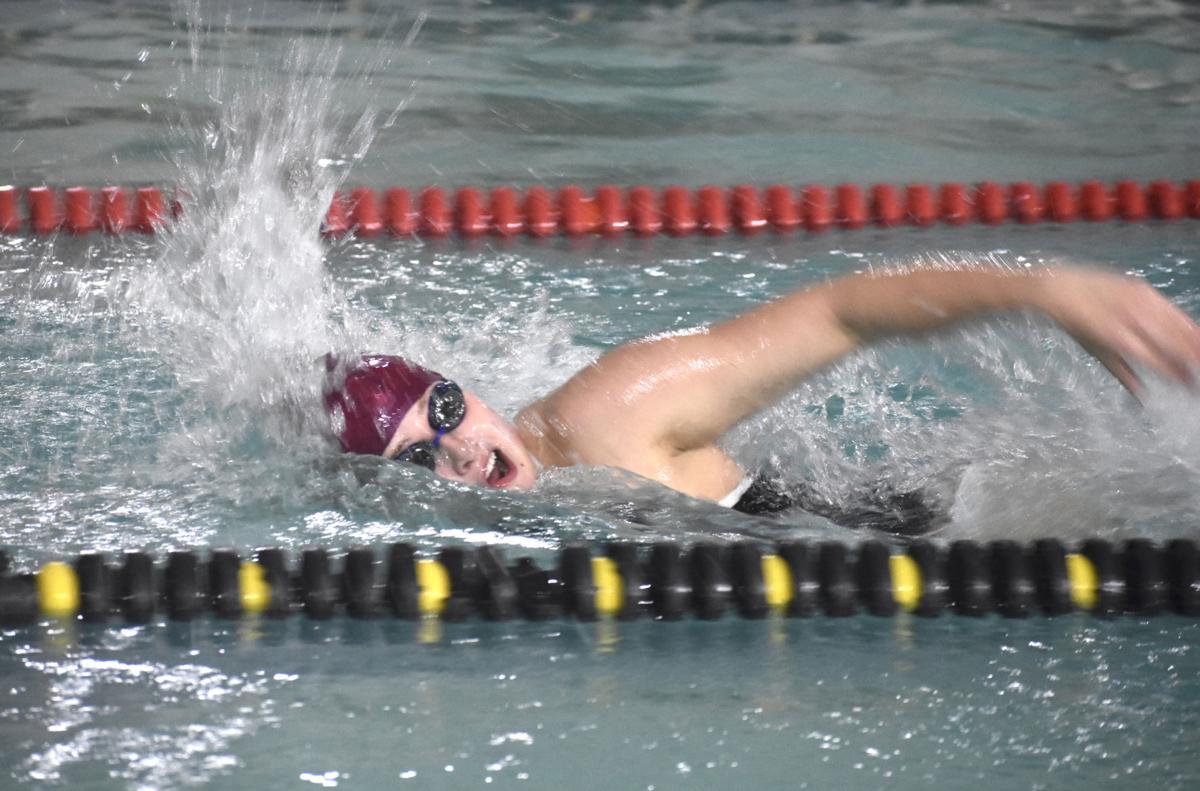 Handley sophomore Grace Morgan competes in the 500-yard freestyle, which she won by 25 seconds, on Saturday at the Signal Knob Recreation Center in Strasburg. Morgan helped the Judges beat Clarke County and Broadway in dual meets. 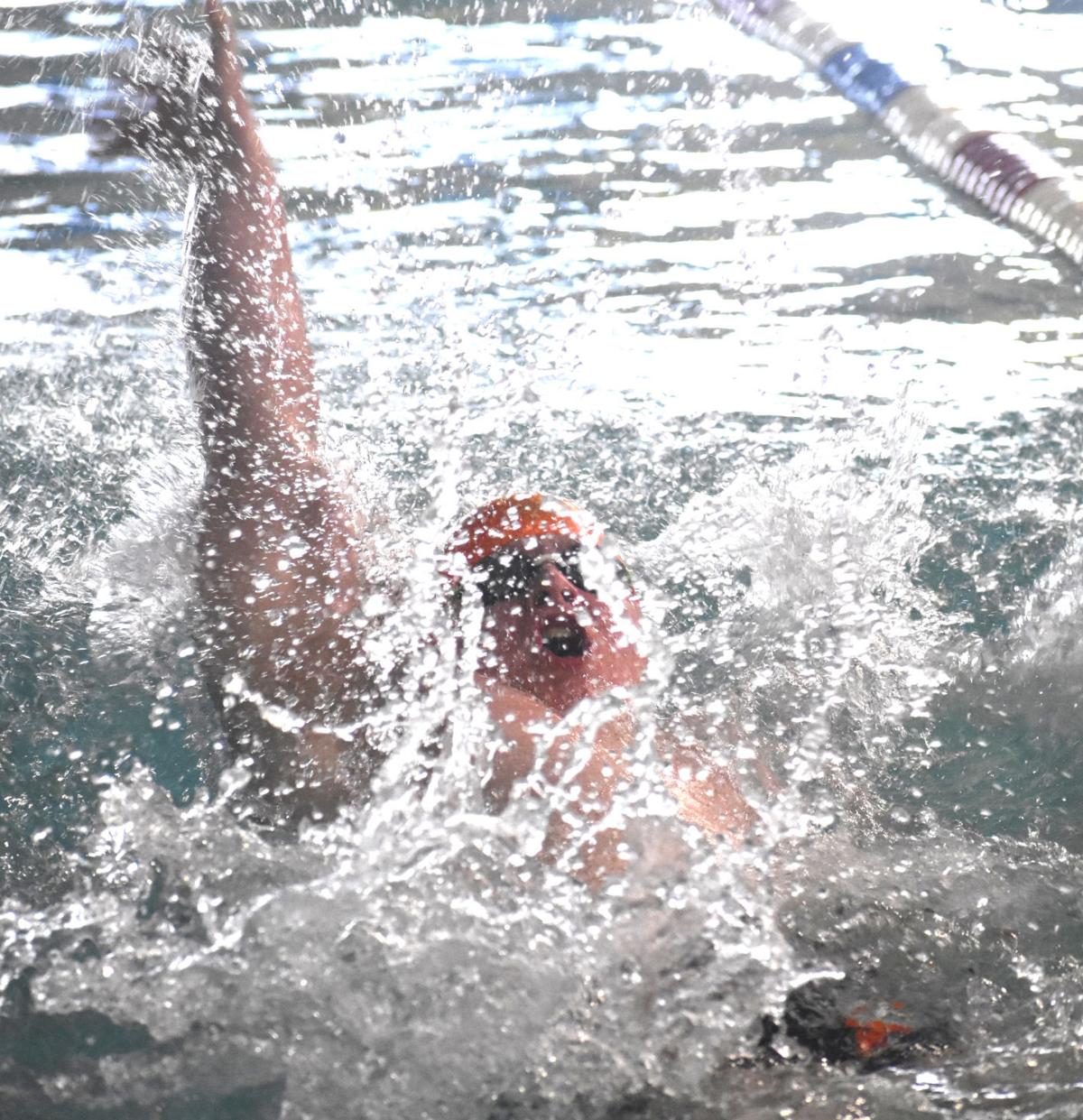 Clarke County’s Patrick Whalen competes in the backstroke of the 200-yard medley relay on Saturday at the Signal Knob Recreation Center in Strasburg. 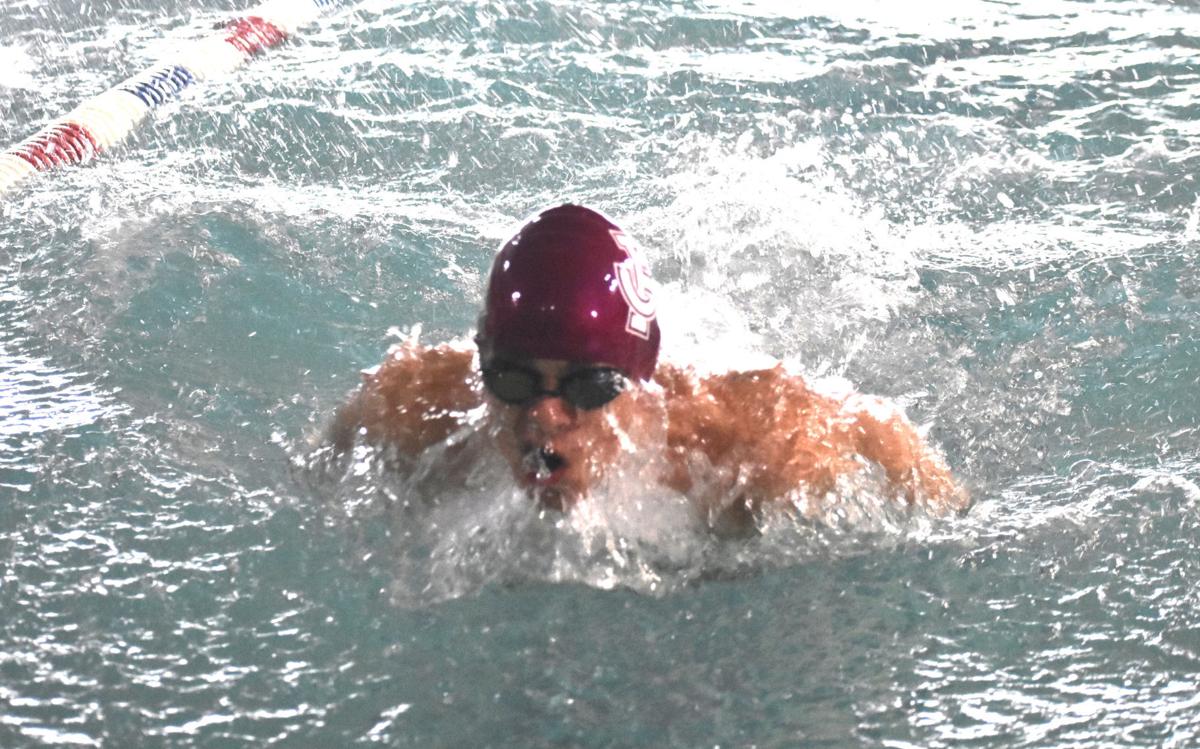 Handley's Henry Fowler won the 200-yard indvidual medley on Saturday in a meet at the Signal Knob Recreation Center in Strasburg.

Handley sophomore Grace Morgan competes in the 500-yard freestyle, which she won by 25 seconds, on Saturday at the Signal Knob Recreation Center in Strasburg. Morgan helped the Judges beat Clarke County and Broadway in dual meets.

Clarke County’s Patrick Whalen competes in the backstroke of the 200-yard medley relay on Saturday at the Signal Knob Recreation Center in Strasburg.

Handley's Henry Fowler won the 200-yard indvidual medley on Saturday in a meet at the Signal Knob Recreation Center in Strasburg.

STRASBURG — One of the best things that Clarke County swimming coach Carol Marshall witnessed in Saturday’s swim meet at the Signal Knob Recreation Center was a demonstration of leadership from Eagles senior Kayla Sprincis.

“In the 400 free relay she was talking to [sophomore] Riley Duncan, the anchor, and Riley was nervous because of who she was swimming against,” Marshall said. “Kayla was like, ‘Don’t worry about. She blows me out of the water. Just go in there and have fun.’ She was trying to calm her nerves.”

Sprincis not only showed leadership, but the two-time Class 2/1 500-yard state champion also showed her humble nature, and her respect for Saturday’s competition. Fact is, Handley definitely has some girls who can blow a lot of people in the state out of the water.

Class 4 All-State junior Hailey Brown was the anchor leg on that 400-yard free relay team on Saturday, and fellow All-State swimmer and sophomore Grace Morgan also competed on that Judges relay team as the Judges won the final event of the day by 31 seconds in 4:14.30.

Broadway won both duals on the boys’ side, edging Clarke County 78-73 and a significantly short-handed Handley team 90-25. The Eagles beat the Judges 99-22.

All things considered, Handley coach Tag Grove couldn’t have asked for a better performance from his girls’ and boys’ teams, which last competed in a meet on Dec. 22. The Judges had to shut down a week over the holiday break, mainly due to illness. The boys’ team, in particular, is still recovering, with some key swimmers still out.

“When we did get back, one thing that we talked about is that we still have the opportunities we had at the beginning of the season,” Grove said. “We’re just going to have to work a little bit harder with the few weeks that we have left leading up to districts [on Jan. 28].

“Here, I thought we had some good performances and we saw a lot of improvement from before the time we took off. I’m really proud of the way the kids have come back. They’ve been a little more focused at practice and today, they were really cheering each other on and supporting each other.”

On an individual basis, Grove was pleased with how Morgan did on her turns. Grove discussed that aspect with her during a break in the action on Saturday.

“I was really trying to focus on my technique and my turns more than my time, and I’m where I wanted to be compared to last year,” said Morgan, the state runner-up in the 500 free last year. “I think I have a chance [at a state title] if I can just focus on the little things I have to do and not worry about everybody else around me swimming.”

Grove said several other individuals impressed him as well.

“Ren Delaney, her sprint, that’s the best I’ve ever seen her swim,” Grove said. “She was just really determined and got herself in consideration for a relay spot. Talley Sublett, coming off a shoulder surgery, had a great meet. Abigail Dodd’s been really consistent all year in the sprints for us, and Emma Fout’s been getting better pretty much every meet.”

Fowler was an All-State swimmer in the 500 free last year, and he expects that to be a top event for him again this year. With the return of Frederick County swimmers to the Virginia High School League season this year, Fowler is currently ranked third in the area in the 400/500 free, and Fowler hopes that competition will benefit him.

“I know a bunch of people from the Winchester Swim Team,” Fowler said. “It’s definitely more competitive for the district this year, which is good. That helps out everyone.”

Clarke’s Sprincis is glad she actually has a relay to compete on this year. Last year’s team only had three swimmers, and the Eagles came into this year with nine girls.

“It’s very nice we have bigger team this year,” Sprincis said. “I’m very happy for the team we have relays.”

That being said, it’s been difficult for Marshall to put together relay lineups this year. Area teams in all sports have been dealing with illness this year, and the Eagles have had their issues.

“I felt pretty good about today considering we haven’t had much time in the water due to weather and due to illness,” Marshall said. “I feel like we have these surges and stalls with the season. Just as soon as we start having some momentum, then we have someone out due to illness. That throws all the relays up in the air. I have yet to swim a meet that I planned the lineup. I’m constantly making changes on the bus.

“I am happy with where we are. The young swimmers are improving, and our upperclassmen, our two seniors, are providing good leadership and encouragement to the younger swimmers. It’s really nice to see.”

The one senior on the Clarke County boys’ team is Liam Whalen, an All-State swimmer last year in the 200 free and the three relays.

Whalen said his times weren’t what he hoped for on Saturday, but he’s focused on the future.

“I’m training hard right now, so I won’t get to know how I’m doing until I get to a meet where I’m fully rested,” said Whalen, who thinks the 100 free and 200 free will ultimately be his main individual events this year. “This season hasn’t gone too bad, but not as well as I’ve liked it to go.”

If the Eagles can ever get to full strength, Liam Whalen thinks they can make it another successful year. Clarke County has finished fourth or better at the Class 2/1 state meet for seven straight years.

“We have yet to swim a meet with everybody showing up, so that will be the factor in winning regionals or not,” Liam Whalen said.