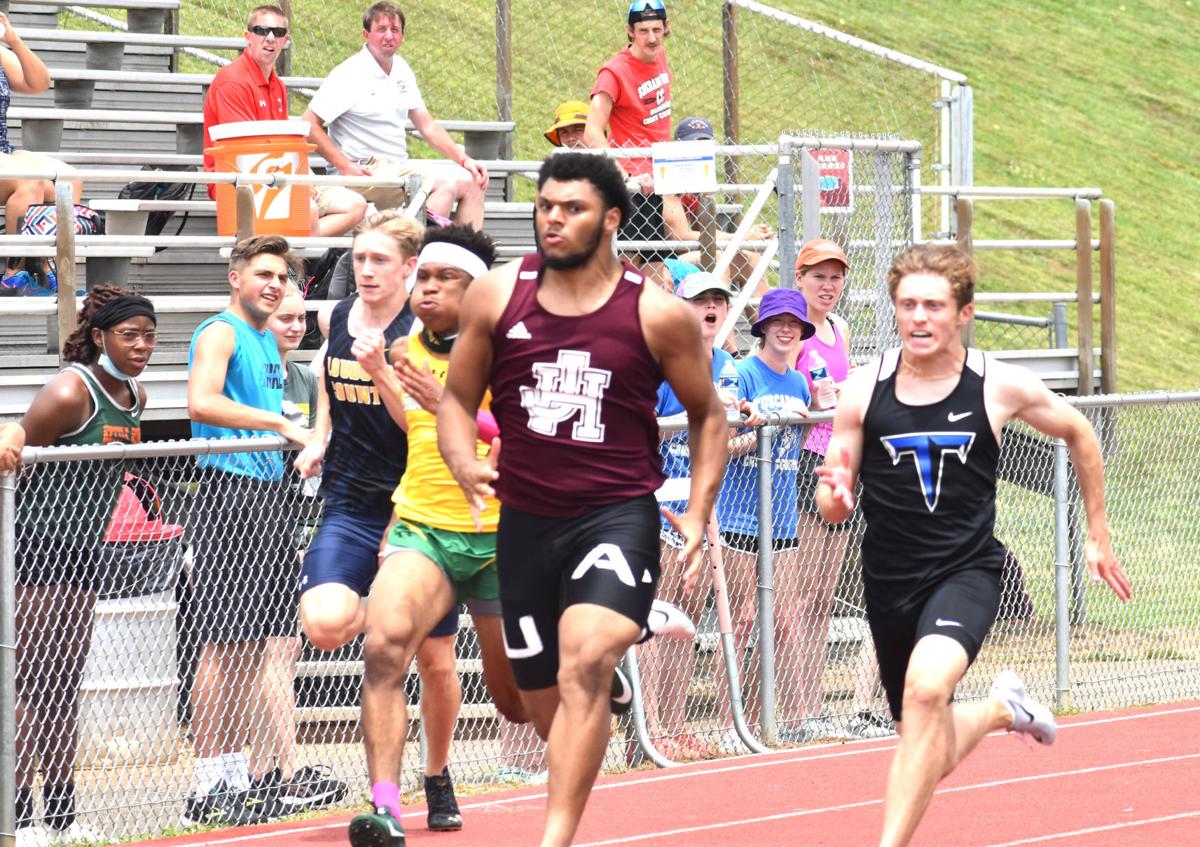 The rest of the field was straining to keep up with Handley junior Stephen Daley (center) during the middle of the 100-meter run on Wednesday at the Region 4C meet at Fauquier High School. Ultimately, Daley’s late push near the finish line allowed him to edge top-seeded Dylan Scarnato of Tuscarora (right) with a personal record of 10.88 seconds to Scarnato’s 10.90. Daley led the Judges to a runner-up team finish. 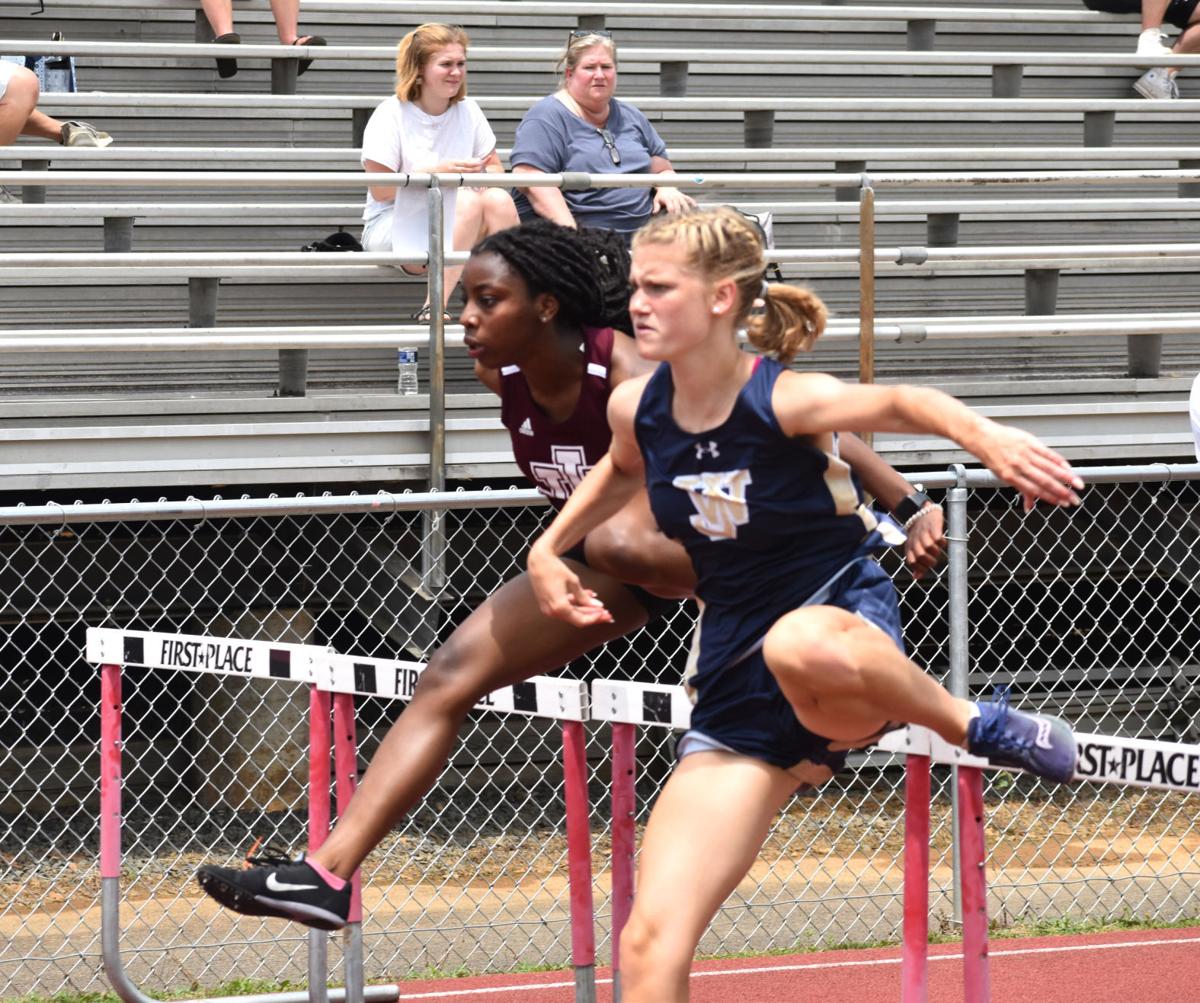 The rest of the field was straining to keep up with Handley junior Stephen Daley (center) during the middle of the 100-meter run on Wednesday at the Region 4C meet at Fauquier High School. Ultimately, Daley’s late push near the finish line allowed him to edge top-seeded Dylan Scarnato of Tuscarora (right) with a personal record of 10.88 seconds to Scarnato’s 10.90. Daley led the Judges to a runner-up team finish.

WARRENTON — Heading into the Wednesday's Region 4C track & field meet, Handley coach Mike McKiernan said one of his concerns was that Stephen Daley's foot was bothering him.

Given what Daley did on Wednesday, you can add that tidbit to the growing list of things about Daley to marvel at.

The 240-pound Daley set a personal record in the 100 meters to win with a time of 10.88 seconds, then ran a blazing second leg on the 4x100 relay to lift Handley to the championship in that event.

Simply put, Daley once again played a huge role in the success of the Judges, who placed second as a team with 88 points to three-time defending state champion Loudoun Valley (153.5) on a warm and humid day at Fauquier High School. James Wood was seventh with 39 points, Sherando was 13th with 14 and Millbrook was 14th with 13 in the 15-school meet.

Daley placed second in the discus with a mark of 144 feet, 1 inch to also qualify for the Class 4 state meet in that event (the top four in each event will compete at Liberty University on June 19) and placed fifth in the 200 (23.46) and sixth in the shot put (43-8).

McKiernan said he's not sure how long Daley's foot has been bothering him, though apparently it's been awhile. Earlier, Daley didn't even mention it as he discussed his impressive 100, which marked his second straight win over a runner who came in with a 10.91 seed time.

Daley's PR coming in was an 11.03, and his late surge helped him win by two-hundredths of a second over top-seeded Dylan Scarnato of Tuscarora and run a faster time than former teammate Malachi's Imoh's best of 10.91.

"Halfway through, it was just me and [Scarnato]," said Daley, who was beating Kettle Run's speedy Ahmal Williams when Williams pulled up with an injury at the district meet. "At the end, I was just like, 'I'm not going to lose this.' I just lunged and I prayed I got first."

Scarnato clearly knew he was in a battle. He grabbed the back of his leg as he crossed the finish line.

McKiernan said the Judges as a whole did an excellent job of battling adversity all day, both the boys and girls.

The Handley girls had the top local finish in the 15-school meet, placing third with 63 points behind two-time defending region champion Loudoun Valley (131 points) and Fauquier (107). Led by the area's only double individual event winner in senior Brooke Sandy, James Wood was sixth with 39 points, Sherando was 10th with 26 and Millbrook was 12th with 15.

The Handley boys had to compete without Jayden Vardaro, who is not only an all-around individual star but also the anchor leg for the 4x100 team (Vardaro did not compete because of a hamstring injury he suffered at last week's district meet).

The 4x100 team of sophomore Aaron Lee, Daley, senior Matthew Peete and freshman Christian Metzger blazed around the track quite nicely, however, turning in a time of 43.72 that beat runner-up Tuscarora by 0.45. (McKiernan pointed out that the Judges try to take advantage of Daley's speed by having him run close to 110 meters.)

"He ran a great leg," McKiernan said. "I don't think anyone gained on him, let alone passed him."

McKiernan said Ryan Stickley hurt his back within the last couple of days, but he fought that off and nearly won the 400 in his first year competing in that race. Stickley took second in 51.61 and nearly caught Dominion's Demetrius Summers (51.55) at the finish line.

"I was really concerned early in the day whether we could hold it together," McKiernan said. "I was really proud that they did. Even though we had some adversity, the kids fought through it."

McKiernan was particularly impressed by Sofia Posadas. The senior came in as the top seed in the 100 and finished fifth to miss out on the state meet in that event, but McKiernan raved about Posadas' performance as the second leg on the winning 4x100 team (Tierney Finley, Brittnay Turner and Imoh also ran on the team that ran a season-best 49.94 to win by 1.21 seconds). Posadas then closed her day by placing fourth in the 200 in 26.78 to qualify for the state meet.

"[The 4x100 team] dominated that race," McKiernan said. "Sofia ran a fantastic leg on the backstretch. She moved us up from sixth to first."

"I've learned how to bound," said Sandy with a laugh when asked about her triple jump performance, the event she was happiest about on Wednesday. "I'm very bad at bounding. I always stomp my foot down instead of actually striding.

"I felt pretty nice throughout this whole meet, even though [the sky] is gloomy and it's really hot. I'm really proud of the 100, too. I didn't think I was going to do that well. I didn't even know if I was going to to states in one event, and now I'm going in four. It's crazy."

Caroline Sandy, her mother and James Wood's girls' coach, couldn't have been prouder.

"She definitely has become much more competitive this season," Caroline Sandy said. "She's always been competitive with her sister [Audrey], but she's finally taken on the competitiveness with others, which is great. You can definitely see that today."

Sherando and Millbrook will send two people each to the state meet. Warriors junior Ella Carlson won the discus by almost 16 feet with a PR of 138-5 and took second in the shot put (37-7); and senior William Fletcher placed fourth in the shot put (45-5). Millbrook's Kaylin Upson took third in the 100 hurdles (17.55) and sophomore Madison Murphy placed fourth in the 3,200 (11:38.97).