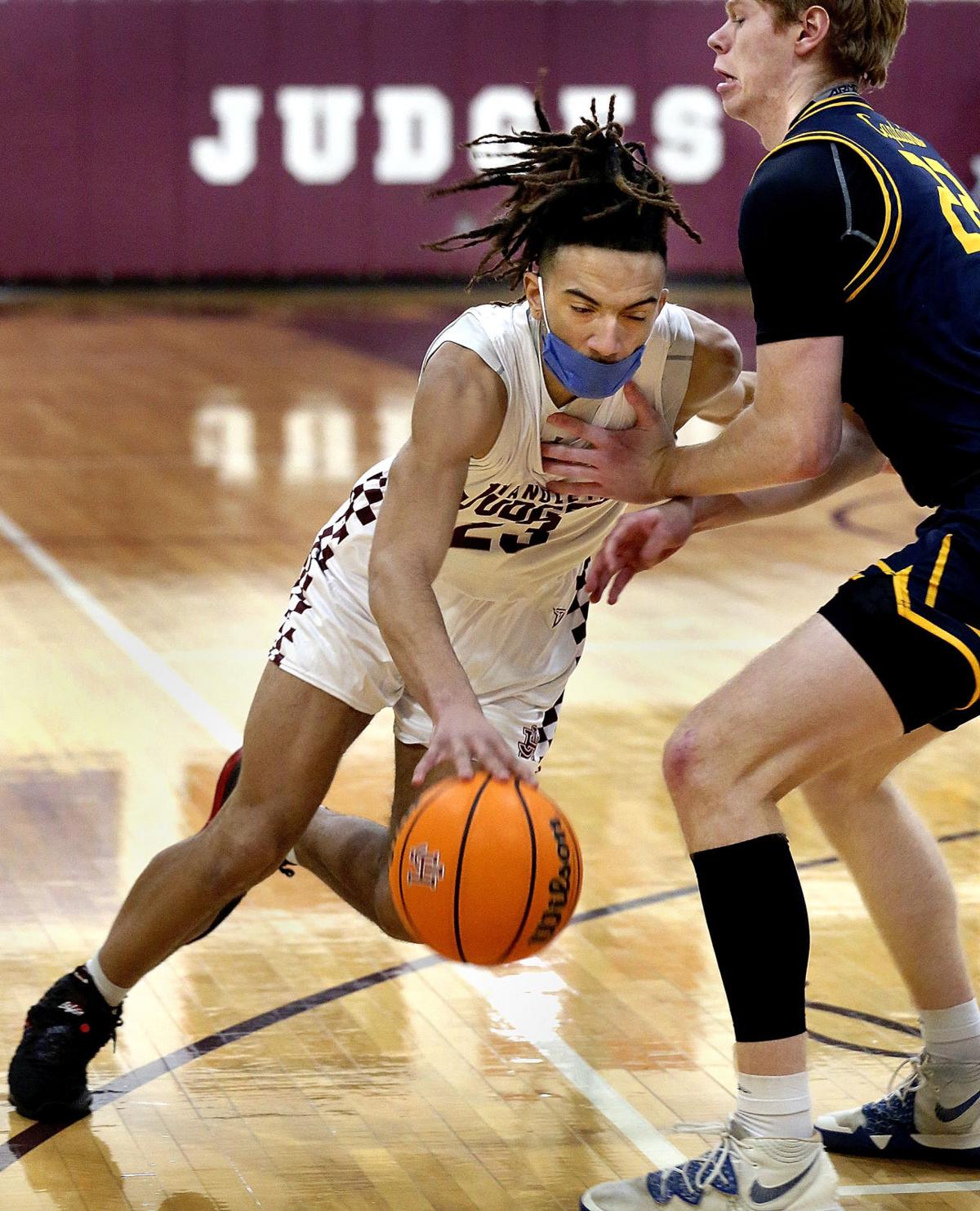 Handley’s Demitri Gardner drives toward the basket past Loudoun County defender Nathan Brown in the Region 4C championship game. The Judges won the region title at home and now they’ll look to win the first state title in program history at Maddex-Omps Gymnasium when they meet Smithfield at 5 p.m. today in the Class 4 championship game. 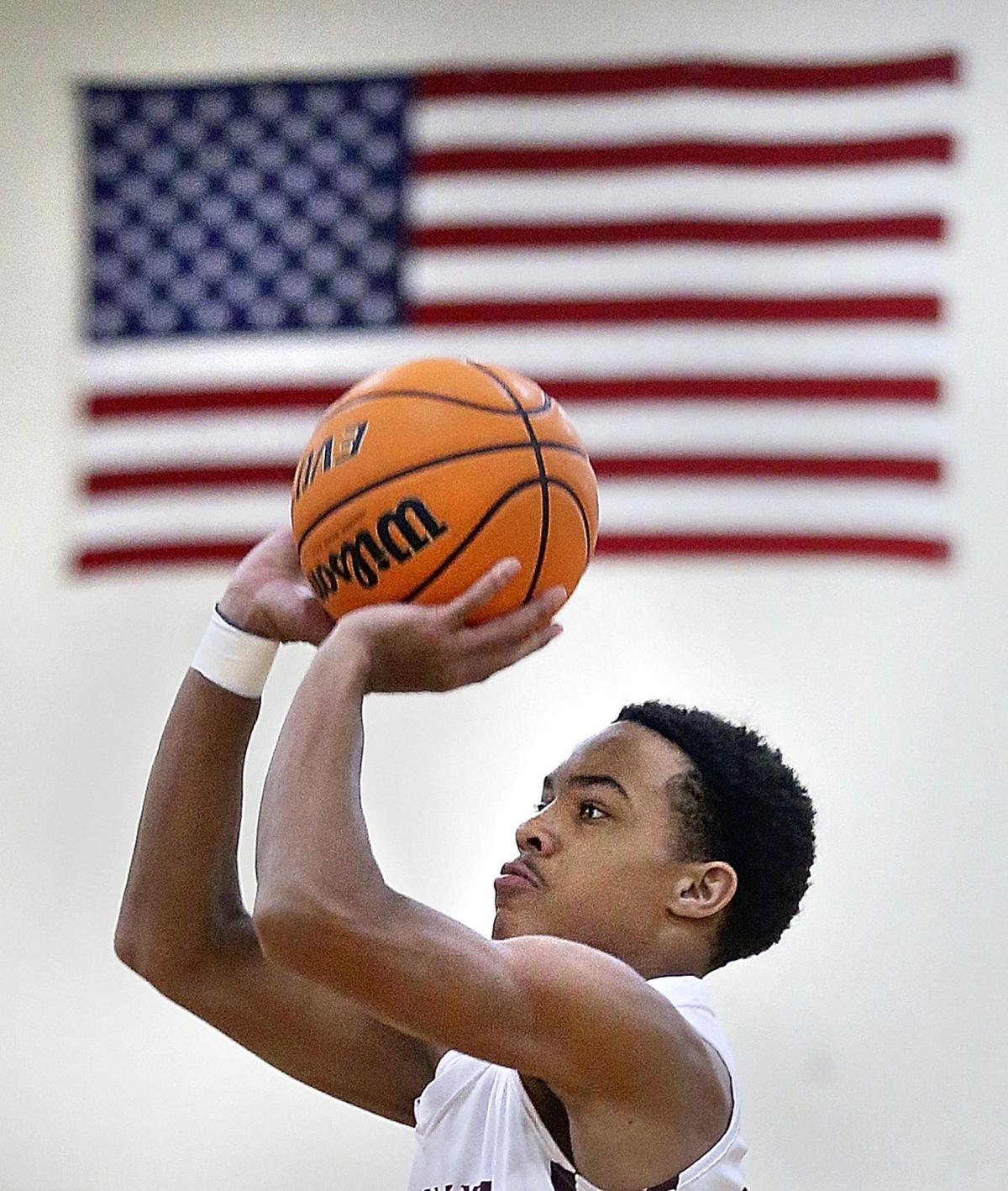 Chaz Lattimore and the 11-0 Handley Judges will try to finish the season perfect against fellow unbeaten Smithfield (9-0) in today’s Class 4 state championship game at Maddex-Omps Gymnasium.

Handley’s Demitri Gardner drives toward the basket past Loudoun County defender Nathan Brown in the Region 4C championship game. The Judges won the region title at home and now they’ll look to win the first state title in program history at Maddex-Omps Gymnasium when they meet Smithfield at 5 p.m. today in the Class 4 championship game.

Chaz Lattimore and the 11-0 Handley Judges will try to finish the season perfect against fellow unbeaten Smithfield (9-0) in today’s Class 4 state championship game at Maddex-Omps Gymnasium.

Playing for a state championship is always memorable, but the Handley boys’ basketball team has a chance to take its storied history to an even loftier level today.

A win in the Class 4 championship game would be the 50th state title for the Judges’ athletic department, the first for the boys’ basketball program, and the first (and probably only) athletic state championship achieved within the confines of Handley’s building.

The Judges are hosting Smithfield at 5 p.m. in their very own Maddex-Omps Gymnasium as opposed to a neutral site, which would be the case if it weren’t for changes created this year by COVID-19.

“The guys are excited to have this opportunity,” said Handley first-year head coach Zach Harrell in a phone interview on Thursday. “Obviously, they were really emotional after the win [Wednesday, a 52-49 overtime victory over Halifax County in the semifinals].

“I can’t think of any better way to bring a state title to the city of Winchester than to win it on our home floor in a year when no one even knew we were going to play basketball.”

Harrell — whose team was able to practice Friday after being snowed in on Thursday — knows it’s not going to be an easy feat to accomplish though.

The 11-0 Judges will have to give everything they have and execute at a high level to beat fellow unbeaten Smithfield (9-0), which captured the Region 4A championship and defeated Eastern View 56-49 in Wednesday’s other semifinal game. The Packers are also looking for their first boys’ basketball championship.

“We’re going to have to have 32 minutes of unity, and energy, and passion, and playing with heart,” Harrell said. “And it’s going to take a lot mentally.”

Today’s contest can be viewed on the NFHS Network at https://www.nfhsnetwork.com/events/vhsl/gamdd2e551865.

Of the eight games in which scores are available, the Packers — who are about 20 miles from Newport News — outscored their opponents by at least 15 points in all but the win against Eastern View, and they’re averaging 60 points per game. Handley (67.5 points for, 46.6 against) had beaten everyone by at least 14 points until the Region 4C final against Loudoun County (55-53) and the Halifax County game.

“I think the thing that stands out about [Smithfield] is their athleticism and their desire to pressure you,” Harrell said. “They look to get up in you. I think it’s very typical of a team from that area. Playing against Halifax prepared us extremely well for a game like this, except I think Smithfield’s a little longer and has a little better guard play. It’s definitely going to be a challenge.”

Harrell said the Packers play full-court man-to-man defense, and they like to implement traps all over the court.

The Judges turned the ball over on four straight possessions after Halifax went to a half-court trap in the fourth quarter on Wednesday, but Harrell thinks the Judges have what it takes to execute better against traps going forward.

“I think we had some time to look at the film and figure out some better places to put our guys, so we can put them in better positions to make plays,” Harrell said. “I think what Halifax did had a lot of success because it just kind of came out of the blue. They played man-to-man defense the entire game, then all of the sudden, they throw the 1-2-2 trap at us out of nowhere. We had worked on it and anticipated it, but we’re coming across half court and not recognizing what they’re in, and they turned us over a couple of times.

“We’ve had some time to prepare, and we just have to be sound, be poised, be disciplined, and know how to handle those traps when they come to us. We have to play the game of triangles and don’t leave anybody out to dry.”

In the semifinals, Moye only scored four points partly due to an ankle injury, but Tucker (18 points), Giles (15) and 6-4 senior Kelby Saunders (10) each scored in double figures to pick up the slack. (In a phone interview, Smithfield third-year head coach Theotis Porter said Moye will be fine for today’s game). The fifth starter, 6-1 senior Tristan Baker (6.6 points per game), knocked down six 3-pointers and scored 25 points in the 63-45 Region 4A championship win over Grafton.

Harrell said he was impressed with Smithfield’s guard play. Porter said he coaches all of his players to handle the ball like guards.

“They all work on ball-handling, they work on shooting,” Porter said. “We like to play fast like a lot of teams in our region, but [a lot of teams in the Bay Rivers District] play a slow-down zone-heavy type of game. We kind of get the best of both worlds in the region and district that we’re in. We’re able to function with teams that want to play zone and make us slow down, and if teams want to play uptempo, then obviously we can do that as well.”

Harrell said Tucker looks about 6-5 or 6-6 on film because of his wingspan.

“He’s very, very long, and he knows how to use his athleticism to his advantage,” Harrell said.

Harrell said limiting points off offensive rebounds and turnovers was a point of emphasis against Halifax County, and both Harrell and Porter said those things will be key to each of their team’s success today.

In the middle of the regular season, Harrell was concerned about the team’s rebounding, but he feels it’s picked up since. The Judges and Comets were about even on the boards in Wednesday’s game.

“Early on this season, we never had anybody to box out, because teams were so afraid of our transition,” Harrell said. “Our guys were just being athletes and going up and getting the ball. As the season went on, teams started watching us on film and saw we weren’t putting bodies on anybody, and teams started sending guys to the offensive glass.

“But as the opponents have gotten tougher and the stakes of the game have risen [in the postseason], we’ve honed in a little bit more on making sure we’re putting a body on someone, and not just making contact but pushing guys back to clear an avenue to grab the rebound. If you don’t rebound the basketball at a high level in a game like this, you don’t deserve to win.”

Though Smithfield doesn’t rely much on 3-point shooting, Harrell said the Packers do shoot better from beyond the arc than Halifax. Harrell said the Judges will need to be active and contest shots if they use the zone that was so effective against the Comets.

“We’re going to try our best to contain him and run a lot of different bodies at him,” Porter said. “There won’t just be one specific person on him all game. We’ll just try to not give him anything where he gets comfortable.”

While Handley is looking to defend its home court, Smithfield has a lot of hungry players who want to make the 200-mile journey home with a title in hand. Porter said all but two players are back from last year’s team, which went 21-2 before losing 102-69 in the Region 4A semifinals to Woodrow Wilson last year.

“It was an embarrassing loss, because we played the worst game of our season at the worst possible time,” Porter said. “We’ve fed off of that all season. [Making up for that] has been our motivation since Day 1.”

Handley’s players hope they’re the ones celebrating, though.

“This is probably going to be the only time states will ever be held at Handley,” said junior forward Stephen Daley on Wednesday night in the Halifax County visitors’ locker room. “I’m excited to try and be the first ones to get it done and win a state title.”