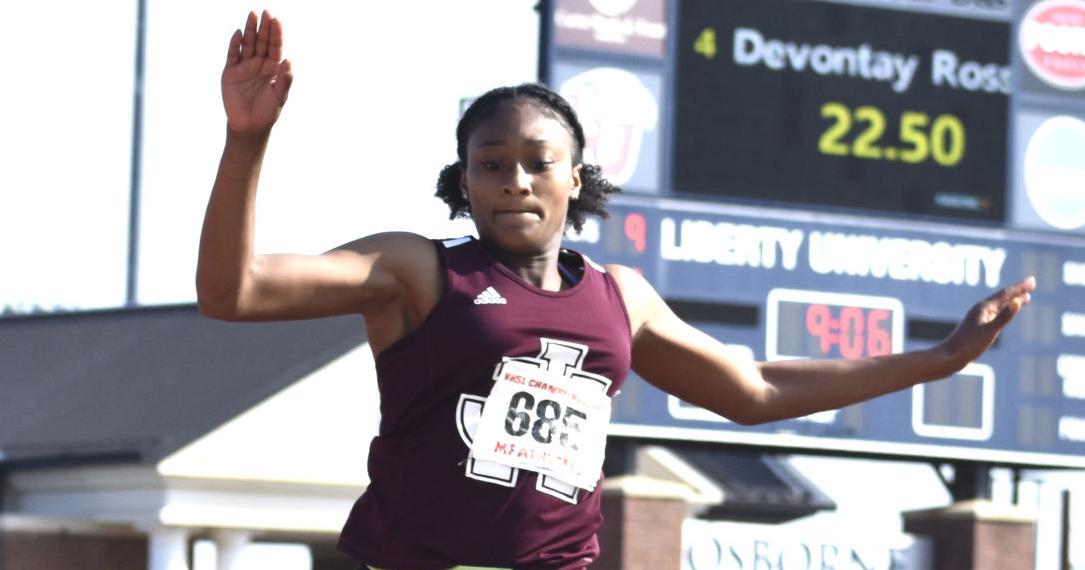 Handley's Taylor Beard leaps during her final triple jump attempt on Saturday at the Class 4 state track & field meet in Liberty University in Lynchburg. Beard won the competition with a mark of 39-3.5. Later in the meet, she also won the long jump with a personal record of 18-11.25, giving her a sweep of all three jumping competitions in the two-day meet. Beard won the high jump on Friday.

Millbrook senior Kaycee Cox-Philyaw runs on during the opening lap of the 800 meters at the Class 4 state track & field meet on Saturday at Liberty University in Lynchburg. Cox-Philyaw took 12th in the race but earned all-state honors in her other two events. She helped Millbrook's 4x800 team take fifth on Friday and she placed third in the 1,600 in 5:09.48 on Saturday. 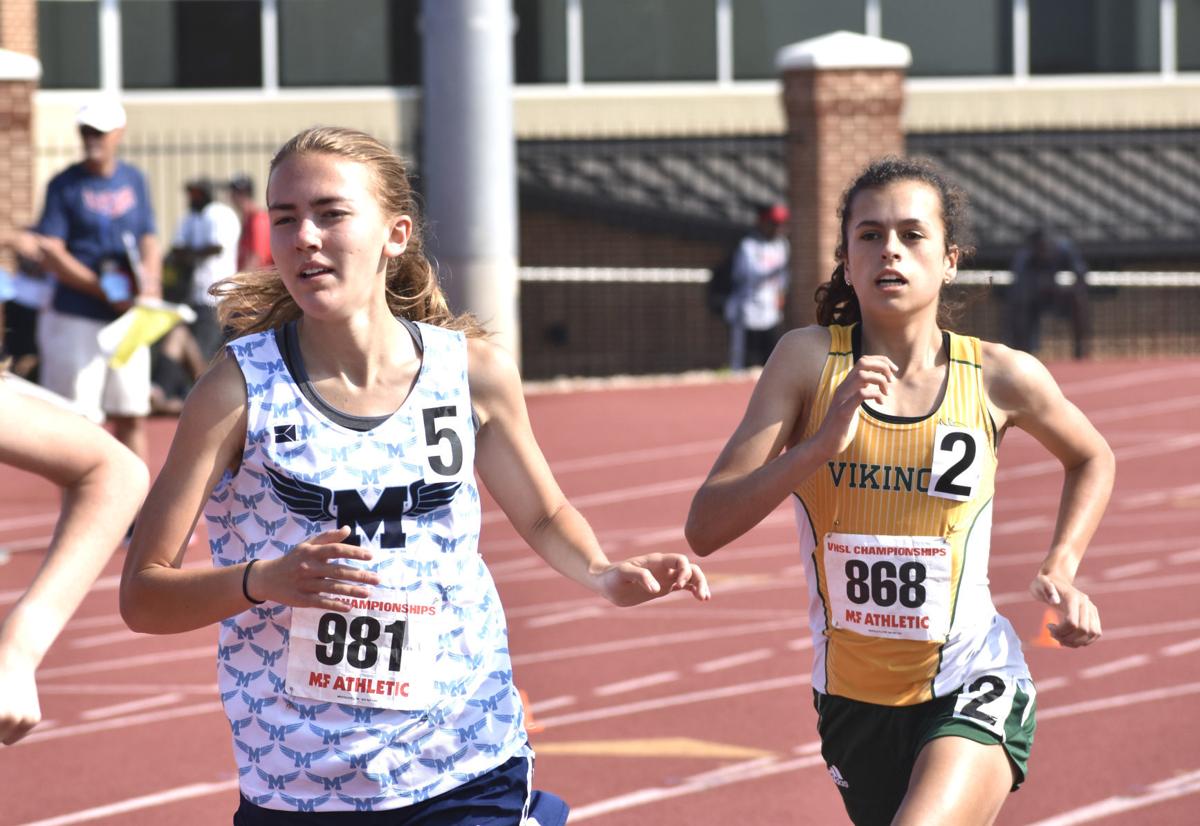 Handley's Taylor Beard leaps during her final triple jump attempt on Saturday at the Class 4 state track & field meet in Liberty University in Lynchburg. Beard won the competition with a mark of 39-3.5. Later in the meet, she also won the long jump with a personal record of 18-11.25, giving her a sweep of all three jumping competitions in the two-day meet. Beard won the high jump on Friday.

Millbrook senior Kaycee Cox-Philyaw runs on during the opening lap of the 800 meters at the Class 4 state track & field meet on Saturday at Liberty University in Lynchburg. Cox-Philyaw took 12th in the race but earned all-state honors in her other two events. She helped Millbrook's 4x800 team take fifth on Friday and she placed third in the 1,600 in 5:09.48 on Saturday.

Handley senior Taylor Beard completed her incredible Virginia High School League career by winning both the triple jump and long jump championships on Saturday at the Class 4 state track & field meet at Liberty University. Following her victory in Friday's high jump, those victories gave her a sweep of all three jumping events.

"This year, my improvement [in all the jumping events] has just been amazing," Beard said. "I expected to do better than I've done in previous years, but for me to do as well as I'm doing now, postseason, really shows how hard work can pay off. All the time I spent with [Handley head] Coach [Mike] McKiernan to become a better, stronger, jumper, and [assistant] Coach [Roy] Ferry, it all just came together in the postseason. It's exciting."

The one individual event Beard did not win over the weekend was the 300-meter hurdles, where she was the top seed coming into the meet by 1.3 seconds. Beard had a slight lead heading into the second-to-last hurdle on Saturday, but she clipped it and fell onto the track. Beard got up and finished the race but wound up taking 15th out of 16 competitors.

Beard later said with a laugh, "I can't win everything." It just seems like she does. Beard won 10 of her 12 individual events during this year's postseason run (she was regional runner-up in the long jump) and her state titles this weekend give her 10 for her career. She's won seven in the high jump (four indoor, three outdoor), two in the triple jump (one indoor) and one in the long jump.

Beard also helped the 4x100 win a regional title last week and earn all-state honors by taking seventh on Saturday, even though McKiernan said the Judges didn't make the 4x100 a requirement for Beard this week.

"Handley track & field is very blessed to have had her," McKiernan said.

Beard technically won the triple jump on Friday. She had the top mark of 39-3.5 when lightning hit and forced the last round of competition of the three-jump finals to be postponed to Saturday. None of her competitors came close to the mark. Beard took her final attempt but didn't surpass her Friday mark.

"At regionals, when I jumped my PR, I had more confidence [for the state meet]," said Beard, who came into the state meet with a top mark that was almost two feet better than the rest of the field.

While Beard came in as the heavy favorite in the high jump and triple jump, that was not the case for the long jump. Beard improved on her PR by almost a foot at the Region 4C meet, but she came into the state meet as the third seed behind sophomores Haley Mack of Sherando and Jessica Williams of Deep Creek, who had each hit 18-4.5.

Hanover's Morgan Crocker (18-1.5) wound up being the only person besides Beard to surpass 18 feet at the state meet, and that was after Beard had already hit 18-4. Beard then put her stamp on the competition by soaring 18-11.25 on her last jump of the competition. Williams wound up taking seventh and Mack finished 14th.

After helping freshman Mikayla Balio and sophomores Sofia Posadas and Brittnay Turner place seventh in the 4x100 in 49.99, Beard took the track for the 300 hurdles. Beard shortened her steps to get over the first hurdle, and she said she couldn't find a rhythm at all in the first 200 meters.

"I usually go over the hurdles with my left leg, and then I didn't do that for the next two hurdles," Beard said. "I just had to use a lot of speed in between hurdles, because I wasn't [going over] them like I should.

"When I came around to the [final] 100, of course, my legs are going to be dead. I was just trying to hold on. Me and [Dinwiddie's Charisma Glass] were like neck-and-neck. I was like, 'I've got to hold on, I've got to hold on.' The second-to-last hurdle I tried to get up there, but my legs were just not having it. It didn't work out for me, so I clipped it. I was like, 'Ok, got to get up and finish it.' [The race] didn't go like I expected it. But setbacks are going to bring more accomplishments. It was humbling. I can't win everything."

Beard didn't win the race, but McKiernan admired how she competed.

"She's just tough," McKiernan said. "She wiped out, but she still got up and finished.

"That was great that Taylor did the 4x100 because she was already busy. That's just the kind of heart she has. We're just going to miss her so much."

Also earning all-state honors for Handley on Saturday was sophomore Mary McKay, who placed fourth in the pole vault by tying her PR with an 11-6. McKay placed third last year with the same mark.

"I wanted to PR, but I'm happy with what I did," McKay said. "I feel I'm more consistent this year. I've gotten on a couple of bigger poles, and next year I'll work on getting an even bigger pole."

In the 3,200, the Region 4C champion Edlich came in seeded fifth, 38 seconds behind the top-seeded runner for all six classifications, Blacksburg's Kaitlyn Wolfe. The Bruins junior went out strong, and after the first two laps only Edlich was in striking distance of Wolfe. Edlich ran her first mile in 5:18 — just three seconds off her 1,600 PR time.

Wolfe started to break away at that point, but Edlich maintained her hold on second place. The exertion Edlich put into her first mile finally caught up to her when she was passed in the last 20 meters by Blacksburg's Ailene Edwards, but Edlich wound up running 10 seconds faster than her PR. Wolfe won in 10:49.03.

"The first mile I felt really good," Edlich said. "The second mile, I was dying. I was taking a risk [in the first mile] to see how far it would get me in my last race. I'm just happy with my PR. It felt great when I finished."

In the 1,600, Cox-Philyaw was sixth after two laps but moved up to third after three laps. She briefly moved into the second by picking up the pace at the start of the final lap. She was passed on the backstretch, but she finished almost a full second ahead of the fourth-place finisher and was only three seconds off her PR.

"I was pretty happy with where I placed," said Cox-Philyaw, who came in as the fifth seed and finished one spot higher than she did at last year's state meet. "I was hoping to break five minutes this year, but that didn't quite happen. But I think I had a pretty strong performance out here."

It meant a lot for Cox-Philyaw to see the 4x800 team have the success it did on Friday. Two years ago the Pioneers placed 14th, and last year they couldn't put a team together when a storm wiped out the first day of competition and the event was rescheduled for a Sunday. This year's 4x800 team — which featured freshman Becca Edlich and the three seniors who ran on the 4x800 two years ago at the state meet in Maddie Lloyd, Emily Muldowney, and Cox-Philyaw — placed fifth in 9:51.92, a four-second PR.

"I was really excited about that," Cox-Philyaw said. "It was really nice to come here and finally get that all-state medal that we knew we could get. I was really with how all the girls performed. It was a really good moment."

Millbrook coach Kevin Shirk, also the school's cross country coach, couldn't have asked for anything more from his distance crew.

"Coming into the season, from a distance coach perspective, I have four senior girls, and one of my goals was to get all four of them to the state meet," Shirk said. "They managed to pull that off a little easier than I thought, so coming in here we thought, 'Let's see if we can get all four of them state medals.' They pulled that off. [Friday], three of them got it in the 4x8, and Sophie this morning had a great two-mile to get hers, and Kaycee added another one for the 1,600. I was really happy with that. And having a couple freshmen get medals too was just the icing on top."

For complete results, go to milestat.com.

Some Apple Blossom committee looks long and hard to find the daughter or granddaughter of some "celebrity" to be queen. This young lady would be an ideal queen; why don't we celebrate our own?