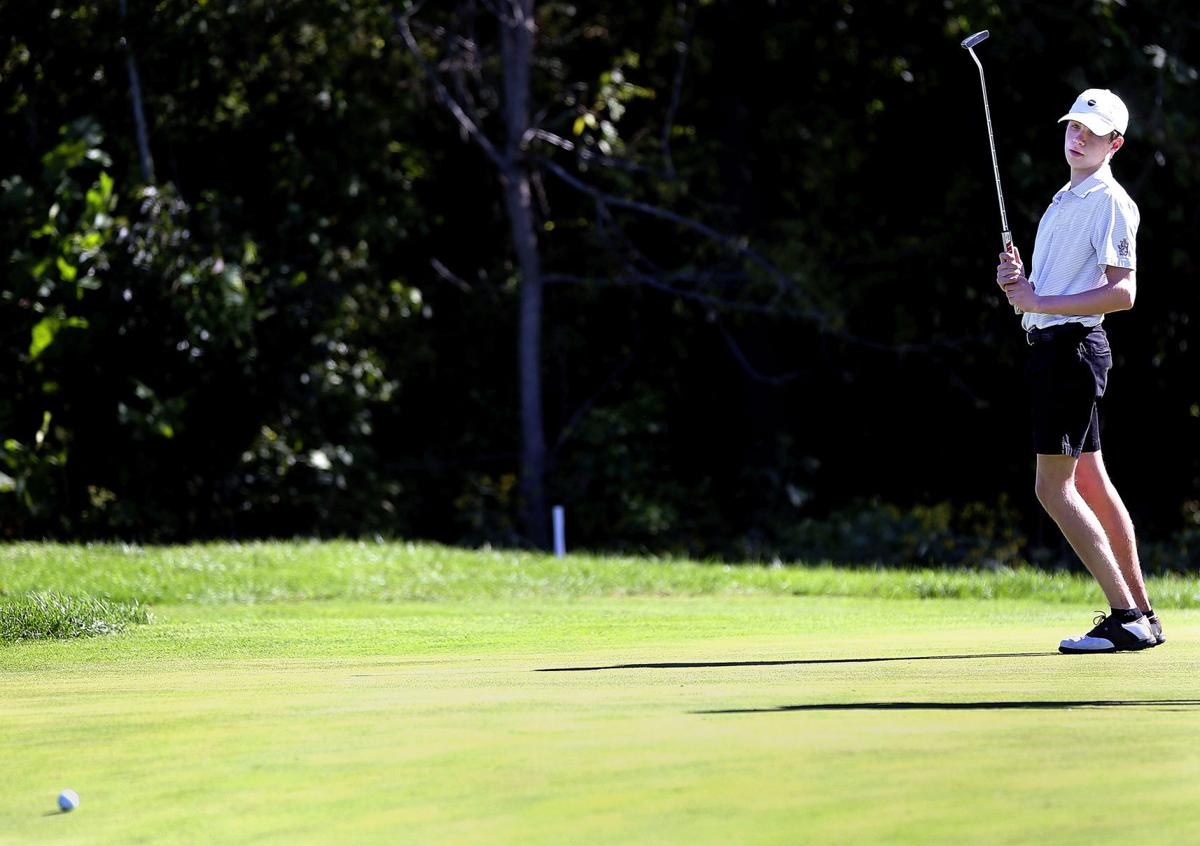 Handley’s Jack Thome watches as his putt rolls toward the cup on No. 1 at the Blue Ridge Shadows Golf Club in Front Royal during the Class 4 Northwestern District golf tournament on Monday. Thome shot a 77 to tie for second overall and lead Handley to second place as a team. The Judges qualified for next week’s Region 4C tournament. 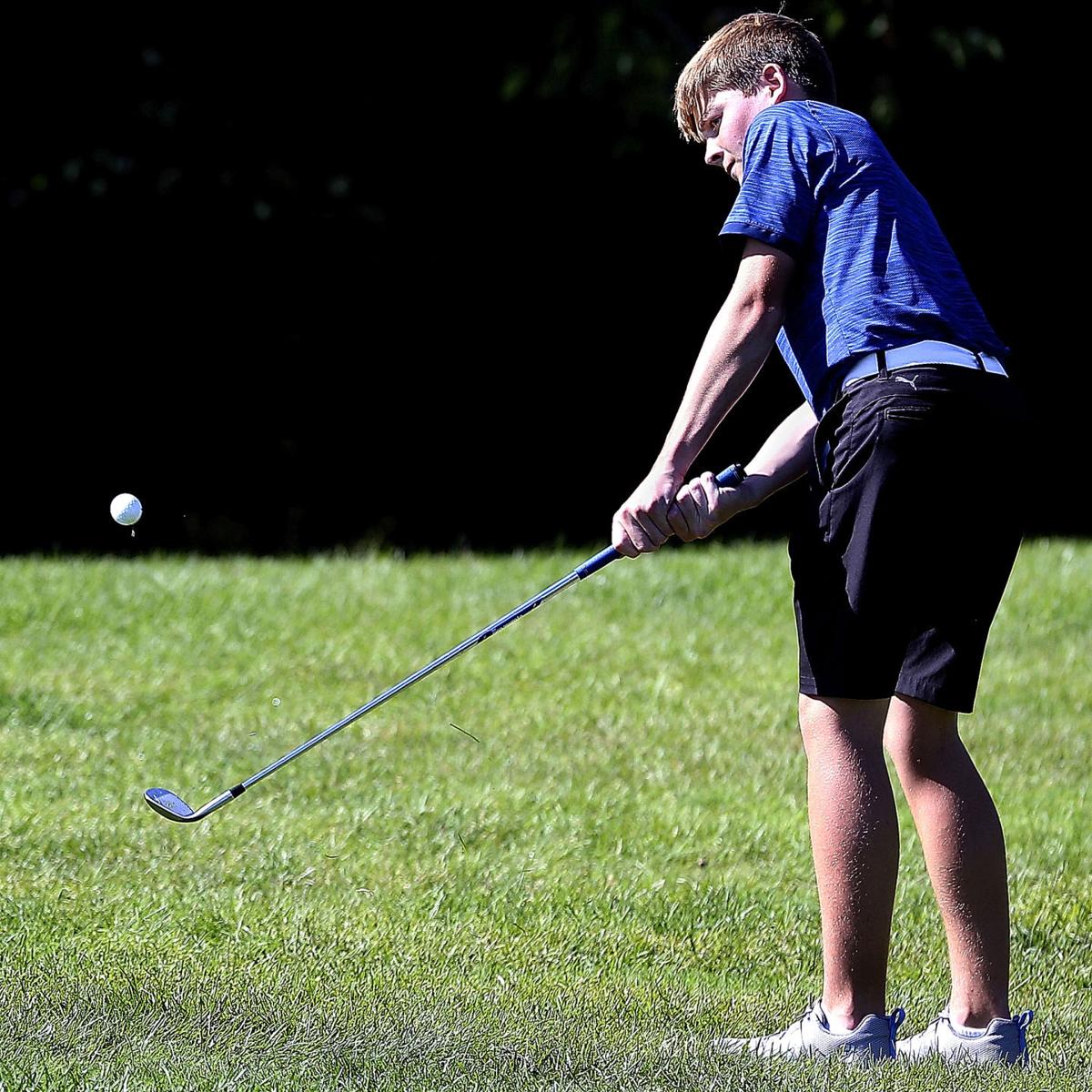 James Wood’s Caden Ganczak hits a chip shot on to the No. 2 green at Blue Ridge Shadows Golf Club in Front Royal on Monday during the Class 4 Northwestern District golf tournament. Ganczak shot a 77 to tie for second individually. He qualified for next week’s Region 4C tournament as an individual. 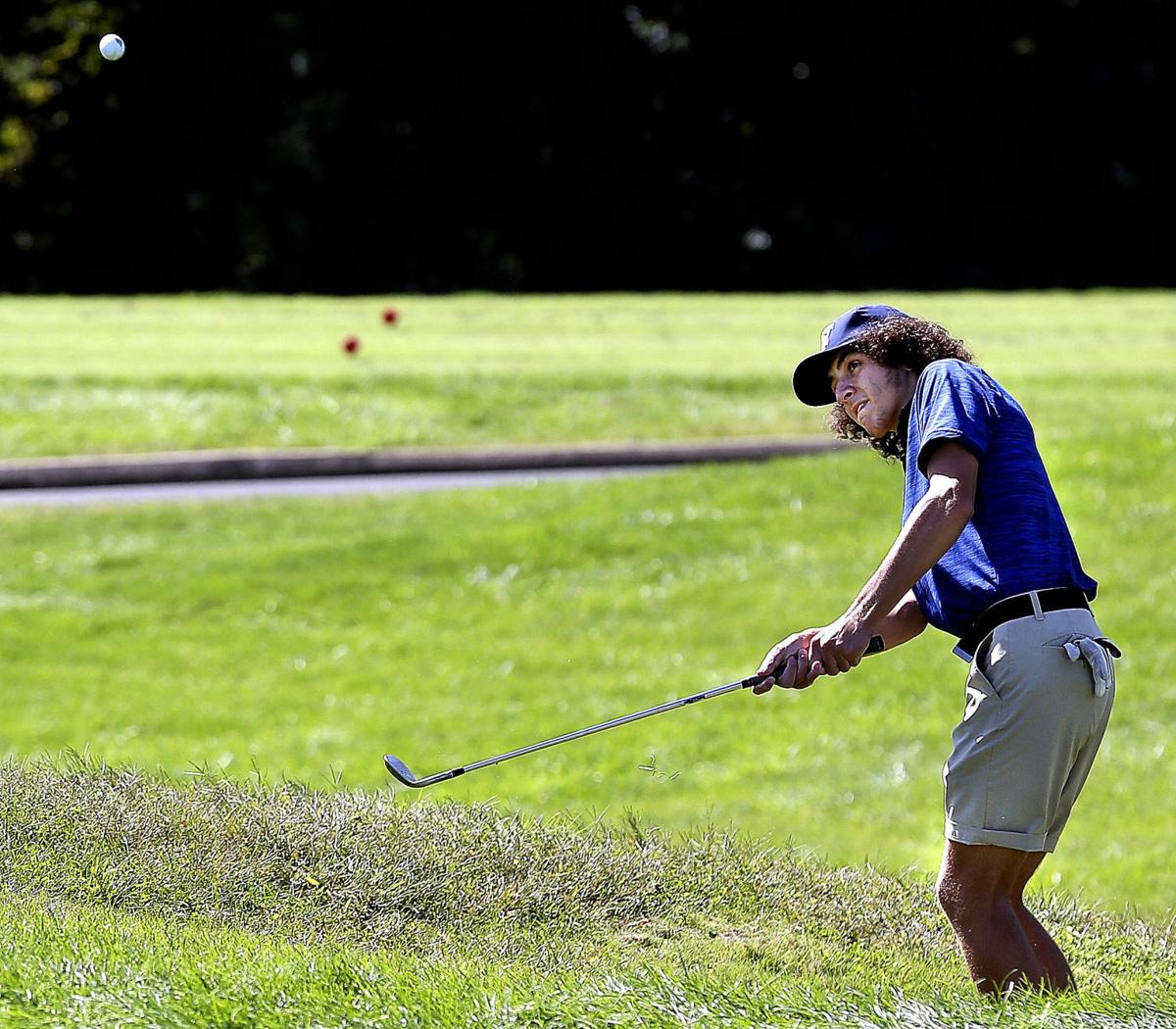 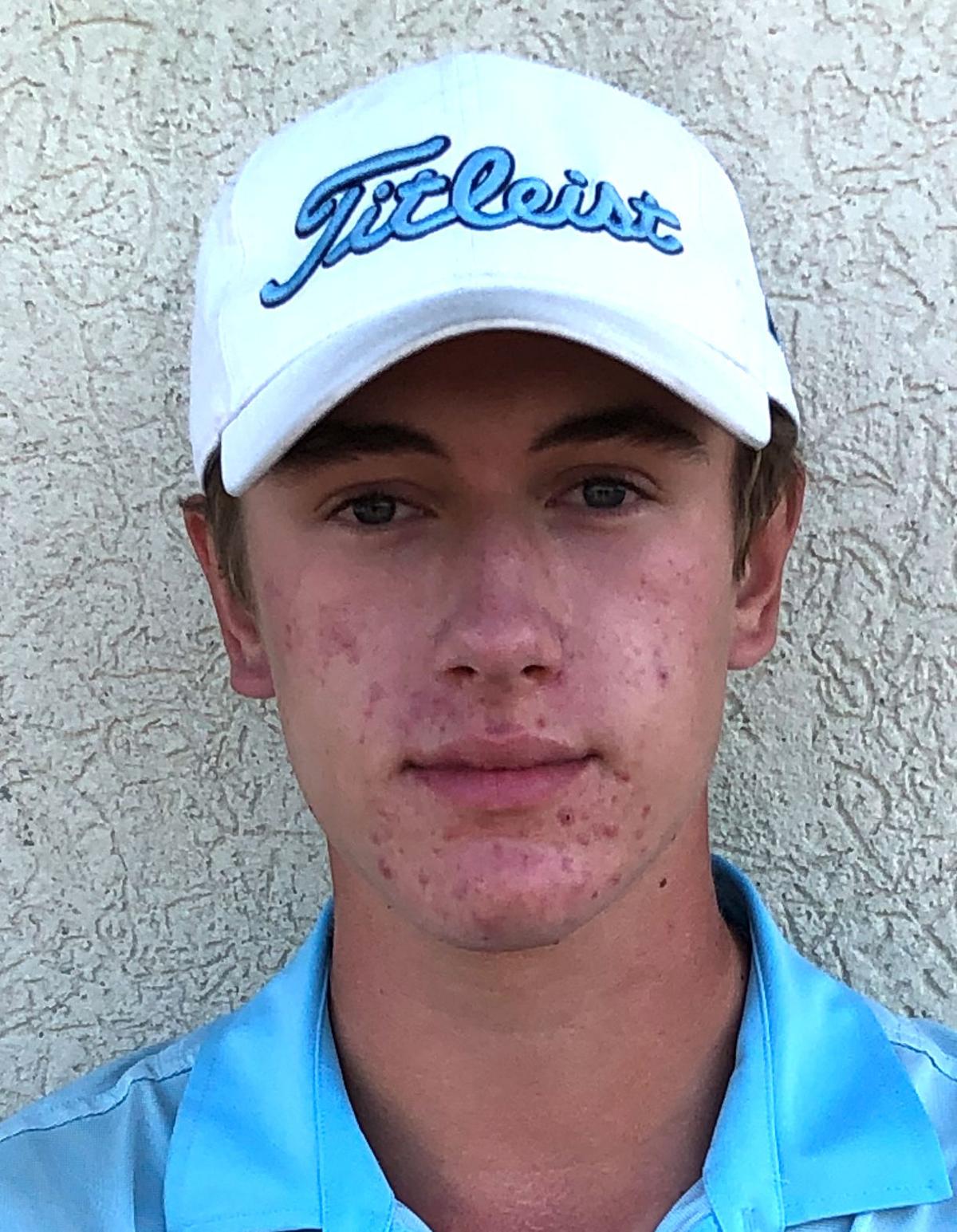 Handley’s Jack Thome watches as his putt rolls toward the cup on No. 1 at the Blue Ridge Shadows Golf Club in Front Royal during the Class 4 Northwestern District golf tournament on Monday. Thome shot a 77 to tie for second overall and lead Handley to second place as a team. The Judges qualified for next week’s Region 4C tournament.

James Wood’s Caden Ganczak hits a chip shot on to the No. 2 green at Blue Ridge Shadows Golf Club in Front Royal on Monday during the Class 4 Northwestern District golf tournament. Ganczak shot a 77 to tie for second individually. He qualified for next week’s Region 4C tournament as an individual.

FRONT ROYAL — After Millbrook senior Will Croyle finished his round on Monday at Blue Ridge Shadows Golf Club with a solid but below his expectations score of 81, Millbrook coach Mark Manspile told him, “Don’t beat yourself up too much.”

About a half hour later, Croyle had a smile on his face after learning of fellow senior Nick Gressley’s score of 79 at the Class 4 Northwestern District tournament.

“That picks me up,” Croyle said.

In the battle for the two available Region 4C qualifying spots, Croyle’s 79 — a 10-shot improvement from his 89 at the Northwestern District mini held on Aug. 9 at Blue Ridge Shadows — played a big role in Millbrook grabbing one of them.

Handley placed second with a 334 and the Pioneers placed third with a 336. Those two and Kettle Run — which had already clinched a region tournament berth for winning the district regular-season title and won Monday’s tournament with a 326 — advance to next Tuesday’s Region 4C tournament at Winchester Country Club. Millbrook’s region berth is its first under ninth-year head coach Manspile.

Individually, places one through three finished in the same order as the Class 4 Northwestern mini tournament.

Kettle Run senior Ben Gray won with a 3-over 75, and Handley senior Jack Thome and James Wood senior Caden Ganczak each tied for second again, this time one stroke better with a 5-over 77.

Gray (37 on front 9, 38 on the back) had a three-shot lead going into the 18th hole, which he bogeyed, over Thome and Ganczak. He took the lead for good when he parred the 12th hole and Thome had a bogey.

Thome led the Judges to their second straight region tournament. Other scoring golfers for Handley were Jag Fitzsimmons (81), Ashley Truban (87) and Austin Smith (89).

“Jack is just always the steady guy who does his job,” Handley coach Troy Mezzatesta said. “Ever since he was a freshman, he’s either made the region tournament as an individual or helped us qualify as a team. He’s been the team leader and plays like a team leader.”

Thome was tied with Gray with a 1-over 37 through nine holes, but he shot a 40 on the back nine. Outside of hitting his tee shot into the water on the elevated 15th hole, Thome had a solid back nine, but just wasn’t able to record any birdies.

“I feel like I was playing pretty well on the front nine,” Thome said. “I shot my irons pretty well. I three-putted on the first hole and then I parred the second. The third hole I hit an 8 iron from about 175 to within four feet, then I made the birdie putt. I think that that was the biggest hole throughout the round.”

Mezzatesta was also impressed by the sophomore Fitzsimmons and the junior Truban.

“I’ve seen [Fitzsimmons] shoot 37. In practice rounds, I’ve seen the kid shoot 76,” Mezzatesta said. “It’s just the belief you can do it and separating the result when you’re in a tournament situation. Before you tee off, don’t make it too big of a deal. So I knew he could shoot a round like this.

“Ashley, I can’t say enough about her work ethic. It’s just unparalleled. Her persistence is definitely a strength for her, and that’s what we saw today. She plays so smart. We preach to her to give yourself an opportunity to make pars and bogeys, and she did that all day long. That was huge for us.”

Gressley placed fifth overall. Other scoring golfers for Millbrook were Croyle and Jack Muldowney and Nick Daddario, who each shot an 88. The latter two played as the No. 5 and No. 6 golfers for the Pioneers on Monday.

“It feels great to qualify as a team,” Gressley said. “We really worked hard this season, and it shows.”

The Pioneers finished behind both James Wood and Handley at the district mini at Blue Ridge, continuing a trend of the Pioneers finishing behind their local rivals in recent years. But Millbrook beat both of them at the Gunter Memorial on Aug. 30 at the Winchester Country Club, and Manspile said that did a lot for the Pioneers’ confidence.

“I’ve been telling the kids all year that this is going to be a process,” Manspile said. “We have to work hard and stick to the plan. Just keep getting better, not get frustrated if you have a bad tournament or you play bad individually, because you’re going to have a couple of other guys to pick you up.

“I told them, ‘you’re going to be able to compete with the other local schools.’ I think it took us actually beating them [at the Gunter] to feel confident enough that we could do it [in the postseason]. That got the ball rolling for us. Hats off to our kids. They worked hard all summer long, and it paid off today.”

Gressley said his driver played a big role in his success on Monday. He birdied the par-5 No. 4 and No. 6 holes. He also had a birdie with a 20-foot putt on No. 13.

In addition to recording the top score at the last district mini, the Colonels had been performing well in duals and were the top local team two weeks ago at the Skyline Invitational at Shenandoah Valley.

On Monday, James Wood was 10 strokes worse than at the district Blue Ridge mini. In addition to Ganczak and Davis (81), scoring golfers for the Colonels were Braeden Crawford (91) and Brayden Rockwell (96).

While Millbrook was playing at one of its home courses and Handley got to play in the postseason last year, Colonels coach David Oates said his team’s postseason inexperience showed. Frederick County schools did not participate in the VHSL postseason last year, so Davis was the only one who had played in a district tournament before.

“I was expecting Caden to be steady today, and Luke got off to a bit of slow start but he battled all day to shoot the score that he did,” Oates said. “The other four, I’m just shell-shocked. We were playing solid until the 14th hole. I don’t know how many over par we were for the next two or three kids, but that cost us big time.

“We played so well all season and were trending in the right direction. I knew if we played really well, we could contend, and if we had hiccups, we’d finish fourth.”

Ganczak had the reverse situation as Thome on the front and back, shooting 40 on the front before closing with a 37.

“The back nine didn’t require as many drives, so I was safer with more 3 woods. I was hitting fairways and having more opportunities [for lower scores],” Ganczak said. “I was hitting the ball well overall.”

Ganczak birdied the eighth and 17th holes, which are both 342-yard par-4s. The birdie on the 17th came after recording bogeys on the previous two holes.

“I’m really happy for Kadin,” Sherando coach Joe Knight said. “He had a tough time on the front nine. On the back nine he started to play better, but he had two rough holes on 16 and 17. He thought he was out of it. I told him to hang in there and keep swinging. To make it in is a big learning opportunity for him to really realize what he needs to do to keep persevering.”