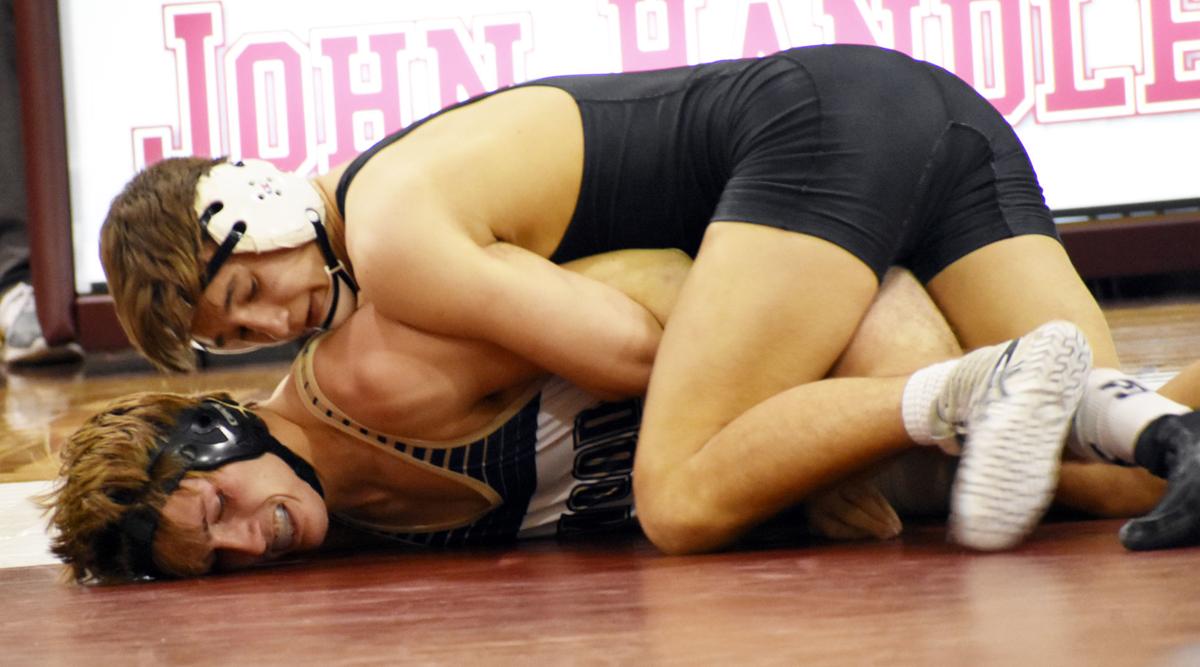 Handley’s Hunter Thompson (top) has a 32-1 record and leads the area in wins. The 160-pound senior has already surpassed his career-high win total set last year when he went 27-18 at 145 pounds. 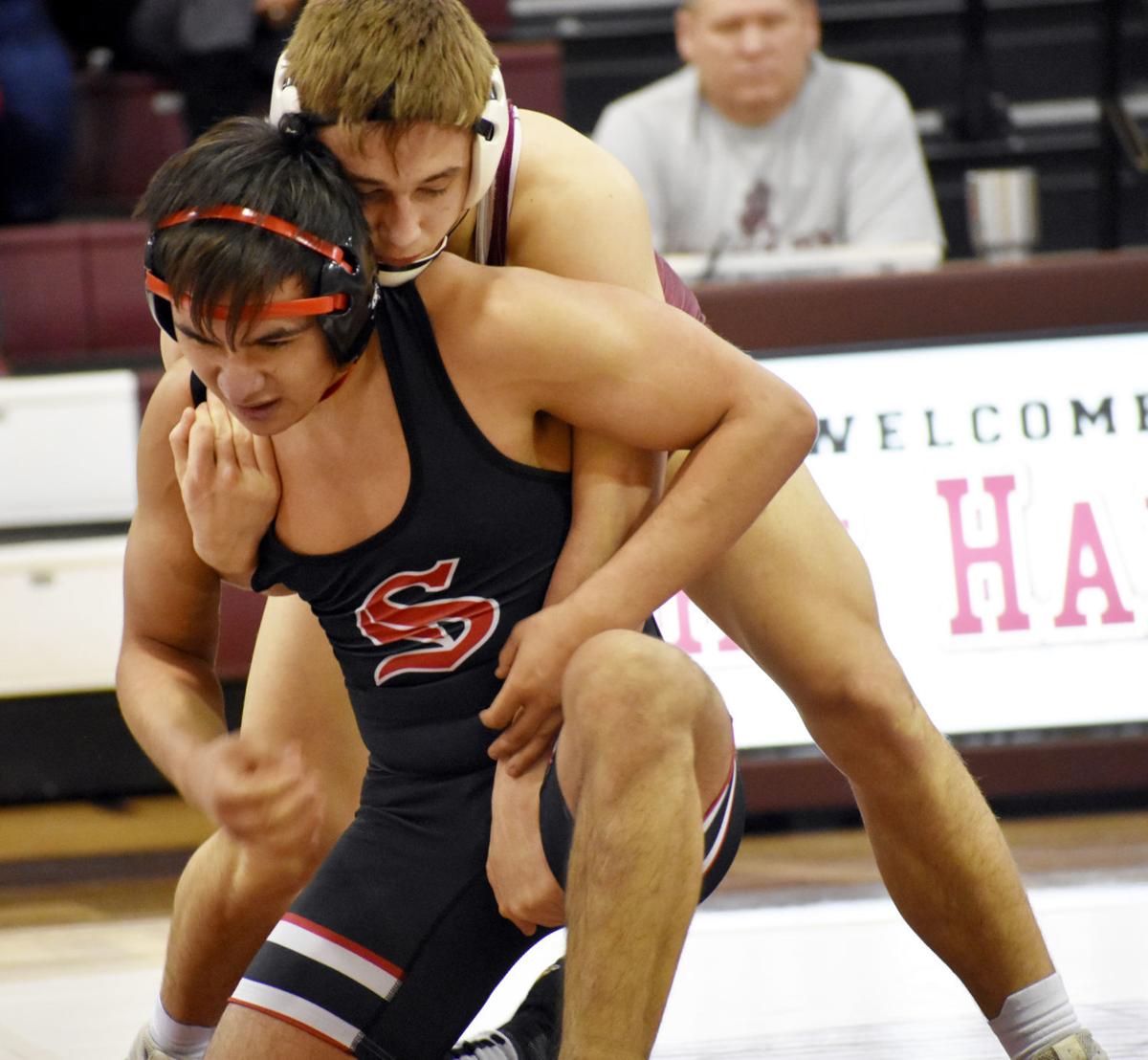 Handley’s Hunter Thompson (back) hopes to qualify for his first state tournament this year and earn a state medal by placing among the top six once he gets there. Thompson missed qualifying for the state tournament by one spot last year at 145 pounds.

Handley’s Hunter Thompson (top) has a 32-1 record and leads the area in wins. The 160-pound senior has already surpassed his career-high win total set last year when he went 27-18 at 145 pounds.

Handley’s Hunter Thompson (back) hopes to qualify for his first state tournament this year and earn a state medal by placing among the top six once he gets there. Thompson missed qualifying for the state tournament by one spot last year at 145 pounds.

WINCHESTER — For Handley’s Hunter Thompson, a wrestling workout at Strasburg High School in June was the first sign that the summer of 2019 was going to be one that was unlike any he had experienced before.

Virginia Tech redshirt sophomore heavyweight John Borst — the former Sherando star — and some of his Hokies teammates made the Shenandoah Valley Elite Wrestling Club and Strasburg High School one of their stops to offer instruction this year.

Little did Thompson know that he was about to be put to sleep by a tutorial from 149-pound Hokies sophomore Brent Moore.

“He put this move on me that I had never seen before,” said Thompson of what he calls the “Big Mac” move, which involves bringing an arm across the torso near the neck area of the opponent, using an underhook on a leg, and a roll. “He didn’t mean to do it, but he put me to sleep pretty well.

“He just didn’t notice because I wasn’t going to my back all the way. I just sagged all the sudden. It was, ‘Oh, I knocked him out.’”

Thompson wasn’t out for long. And his eyes have been wide open ever since.

Thompson was a solid wrestler who started at Handley each of his first three years. But the work he’s put in since has helped him go from not just starting, but to starring.

The 160-pound Thompson is 32-1 and leads the area in wins. The postseason doesn’t start until the Class 4 Northwestern District tournament on Feb. 8, but Thompson has already passed his career-high win total of 27 that he achieved at 145 pounds last year, when he lost 18 matches along the way.

“I just wasn’t used to that kind of stuff they were doing,” said Thompson of his first exposure to Virginia Tech’s wrestlers this summer, of which there was plenty. “Having to pick up speed just to keep pace with those guys during live wrestling, that definitely woke me up.”

Better late than never for Thompson, who will be part of Shenandoah University’s inaugural wrestling team in the 2020-21 season.

One of the reasons why Thompson didn’t fully dedicate himself to wrestling until last summer was because of baseball, which the catcher/outfielder has been playing “his entire life.”

Two years later, Thompson began the year as the Judges’ 113-pound starter before moving down to 106 (he finished 15-19). He moved up to 120 pounds his sophomore year (compiling a 26-16 record and qualifying for the Region 4C tournament, taking sixth). He grew from 5-7 to 5-10 as a junior and again qualified for the Region 4C tournament. He placed fifth — the top four in each weight class go to the state tournament.

During the offseason of Thompson’s first three years, he’d only go to the Red Lion Wrestling Club that operates out of Handley for one, maybe two practices a week during the summer. But when the Judges’ baseball season ended this spring, he decided to see just how good he can be at wrestling this year.

“It was my final year,” Thompson said. “I just wanted to change things up.”

Thompson worked out with Red Lion five times a week during the summer and four times a week once school started in the fall, a change from his first three years when he focused on participating in Handley’s fall baseball program.

He also got to be around Virginia Tech wrestlers Borst, Moore, Moore’s brother Mitch, Hunter Bolen and B.C. LaPrade.

Thompson got to work with them at Strasburg, at Handley with Red Lion, and also at the Virginia Tech High School Wrestling Camp in Blacksburg in July. Thompson went 7-3 to earn team MVP honors while competing against wrestlers from all over, mostly the East Coast.

Thompson continued to work throughout the summer and fall, but it wasn’t until he went 10-0 at the season-opening Hedgesville (W.Va.) Duals on Dec. 6 and 7 that he realized just how far he had come.

“[My confidence] skyrocketed,” Thompson said. “I was feeling like I probably couldn’t be beat right there in that moment. I was like, ‘Man, I’m feeling it right now.’”

Handley coach Troy Mezzatesta said Thompson’s maturity and dedication have helped him put everything together this year.

“I’ve always thought he was an amazing wrestler from the top, but he feels comfortable in any position now,” Mezzatesta said.

Another big breakthrough for Thompson was winning the Toys for Tots Invitational at Ocean Lakes High School on Dec. 21. Thompson was taken down first by Gloucester’s Joshua Seaton in the championship match, but he rallied for a 7-2 win.

“I almost got taken down in the first 10 seconds, and then he took me down later,” Thompson said. “I got up, then I kind of baited him into [attempting the same takedown move], then I got a takedown. I just controlled it from there. Not a lot of guys have won for us at that tournament, so that was nice.”

Mezzatesta said it was great to see Thompson pick up his level of wrestling so quickly after being taken down.

“All of the sudden, he was wearing on the guy,” Mezzatesta said. “He’s been wearing on guys all year long.”

In Thompson’s first match of the new year on Jan. 2, he brought an 18-0 record into his match with James Wood’s Sam Adkins, a returning state qualifier. Thompson spent all but 46 seconds of his 10-0, six-minute victory on top.

Thompson recorded a takedown 26 seconds in, then controlled Adkins from the top position for the next three minutes and 34 seconds. Thompson got a reversal and three-point near-fall 20 seconds into the third period to go up 7-0, then added three more near-fall points.

Thompson’s roll finally experienced a hiccup on Wednesday night, as he lost in overtime in a match against Class 4 Northwestern District rival Caleb Swinson of Liberty in a competition at Culpeper County High School. Wednesday also saw Thompson earn a win over a Culpeper foe for his 100th career victory.

It was another milestone for Thompson this season, one that he hopes ends with his first state medal.

“Some guys give up when they don’t achieve the success they want,” Mezzatesta said. “It’s the type of sport that grinds you — the cutting of weight, the injuries. But he put in the work in the areas that he needed to focus on. He’s an example of the perseverance of human spirit.

On that same weekend as Toys for Tots, Thompson decided he was going to wrestle for Shenandoah University next year.

Tim McGuire was hired as SU’s wrestling coach on Oct. 15, three weeks after the school announced it had added a wrestling program. Thompson said McGuire immediately showed interest in Red Lion. The two got to talking at the Winchester Round Robin youth tournament in November, and that led to Thompson’s eventual commitment.

“I never thought I’d wrestle in college,” Thompson said. “I used to think maybe baseball could be my way into doing sports in college.”

Mezzatesta said he’s excited about the fact that he won’t have to go far to see Thompson, and he’s also looking forward to having Thompson bring some of his teammates to work with Handley and Red Lion. Mezzatesta said one of the things that impresses him the most about Thompson is his desire to teach youth wrestlers, just like Virginia Tech did for Thompson.

“We had matches [Jan. 2, 3 and 4, Thursday through Saturday] and on Sunday [Jan. 5] he was coaching the Red Lion Wrestling Club kids and doing a great job,” Mezzatesta said. “[Coaching] is not something he’s being told to do. This is who he is. He loves wrestling, and he loves to give back. He’s a genuine person.”

Proud of ya Coach!