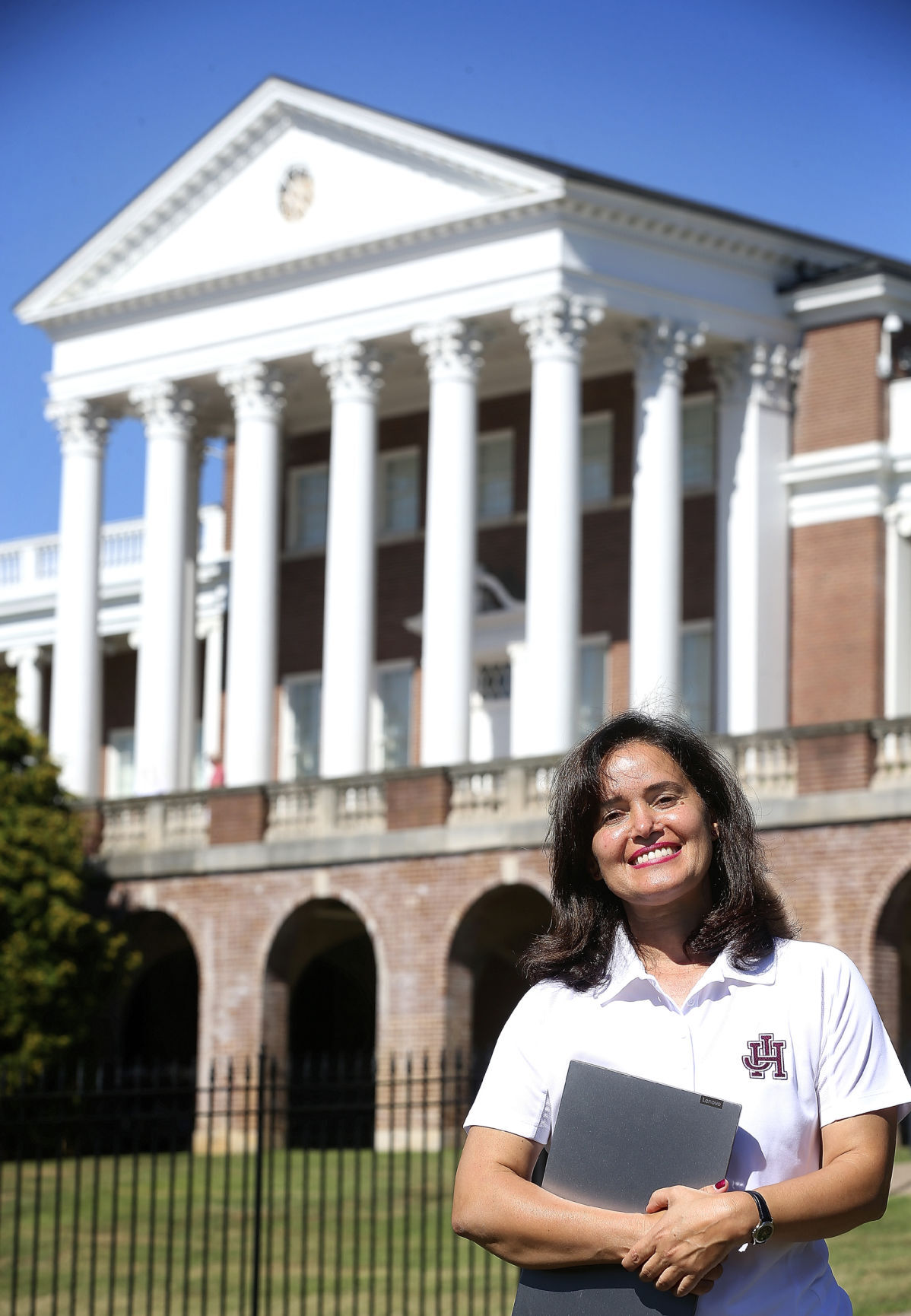 Shahrazad “Sherry” Kablan has been appointed the new principal at Handley High School. 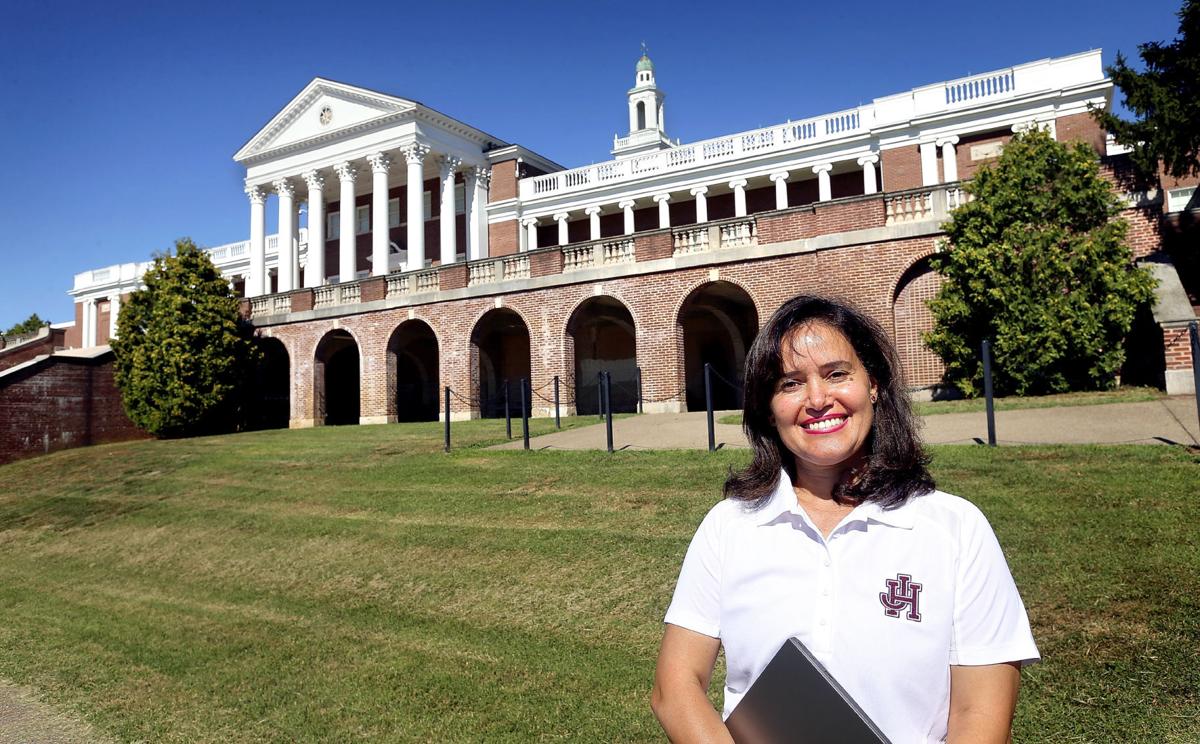 Shahrazad “Sherry” Kablan is the first woman to be principal of Handley High School in its 97-year history.

Shahrazad “Sherry” Kablan has been appointed the new principal at Handley High School.

Shahrazad “Sherry” Kablan is the first woman to be principal of Handley High School in its 97-year history.

WINCHESTER — Handley High School’s new principal has 18 years of experience as a teacher and assistant principal.

But this is Shahrazad “Sherry” Kablan’s first time as a principal.

On top of that, she is the first woman to hold the job in Handley’s 97-year history.

As she faces the responsibilities of being a principal for the first time, Kablan said she plans to rely on the “collective wisdom” of teachers and staff.

“It’s definitely a huge weight on me,” she said in a Wednesday interview about being Handley’s first woman principal. “I know for sure that I will be under the microscope for a lot of things, but I welcome that challenge. I’m a very determined woman.”

Kablan comes with a unique perspective. In 1969, the year before she was born in Libya, there was a coup to remove King Idris I, which made way for a dictatorship under Moammar Gadhafi.

“I grew up in a dictatorship where people were not respected, human rights were violated,” she said.

Luckily for her, she grew up in an affluent family in Libya that supported her pursuit to receive an education, despite living in a country where women were expected to focus on becoming a housewife over anything else, she said.

Her father, who had very little education growing up, was a visionary man, said Kablan, who grew up with 22 siblings. He wanted to ensure his daughters received an education in a society that looked down on such ideals.

“As an educator I always, always was adamant about teaching students the value of freedom, the value of having a voice, the value of being treated as a human being and what America is all about,” Kablan said. “So I did that with my students, especially with immigrants, because they come from different places, different countries for different reasons and they need to know what opportunities are here and how this freedom needs to be not taken lightly.”

When the pro-democracy uprising known as the Arab Spring in 2011 began in largely Muslim countries, including Libya, Kablan took a break for two years from her education career to help shape the movement in her home country.

“It’s 42 years of oppression, so we were adamant about changing the regime,” she said.

She did this through political activism and establishing a television station with other Libyans to help overthrow Gadhafi. She was the first woman news anchor at the first non-governmental TV station, Libya Alahrar TV, which was launched in Qatar.

“I was the voice for my people at that time,” she said.

The list goes on with Kablan’s involvement fighting for human rights and liberation for Libya. But she eventually returned to a full-time career in education in the U.S. for stability after learning that politics was not for her.

Though she is not as involved today as she was during the Arab Spring, she keeps in touch with several organizations lobbying for women and youth empowerment in the Middle East. This includes being a founding member of the Libyan Women’s Platform for Peace, which advocates for women’s rights, such as including more women in local political positions in Libya.

“It’s a struggle,” she said of advocating for women’s rights. “I keep on doing it. I slowly do it on the side.”

Kablan spent the past two years as an assistant principal at Stone Bridge High School in Loudoun County.

While she’s excited to embrace, cultivate and learn more about Handley’s many traditions, Kablan said she is equally looking forward to focusing on the future by shaping students to be global citizens, critical thinkers, collaborators, creators and communicators.

“The vision for me is to foster a love of learning at John Handley, I want everyone, that’s students and staff, to love coming to work and love coming to school,” she said.

As Winchester Public Schools began its search for a new principal in May, Superintendent Jason Van Heukelum shared a sobering report about Handley’s increasing absenteeism and high school dropout rates in recent years. Handley has about 1,300 students in grades 9-12.

Kablan said she plans to do a comprehensive audit of the school to identify the factors that are causing these issues. Once she determines the factors that are pushing students away from attending school, she wants to address them and create an environment that pulls students in, she said.

— Shahrazad "Sherry" Kablan, who is the first woman to serve as woman principal in Handley High School's 97-year history

Is it not kinda of odd that an employee of LCPS is coming to WPS ... normally its the other way around.

Last time this area got a principal from over the mountain ... if I recall didnt last a year and that was at James Wood years back.

Well, technically Dufrene was from "over the mountain" in Manassas, just a little further east. All these touchy feely everyone gets a trophy Administrators that keep getting hired make me want to vomit.

Oh great, another "globalist". No more globalism. America first. Depend on no other country. However, be there when they need us.

Bingo. Maybe get the kids to actually attend school first, then get them to learn basic history, math, science, etc. and how to be good Virginia and United States citizens. The rest of that plan of hers is a bunch of warmed-over mush.

Maybe they should be indoctrinated to salute the flag by reflex and be ordered to respect the President? Maybe mandatory military service, too?

Keep on being classy.

@OldPhil - " get the kids to actually attend school first, then get them to learn basic history, math, science, etc." You are clearly an insane fascist!