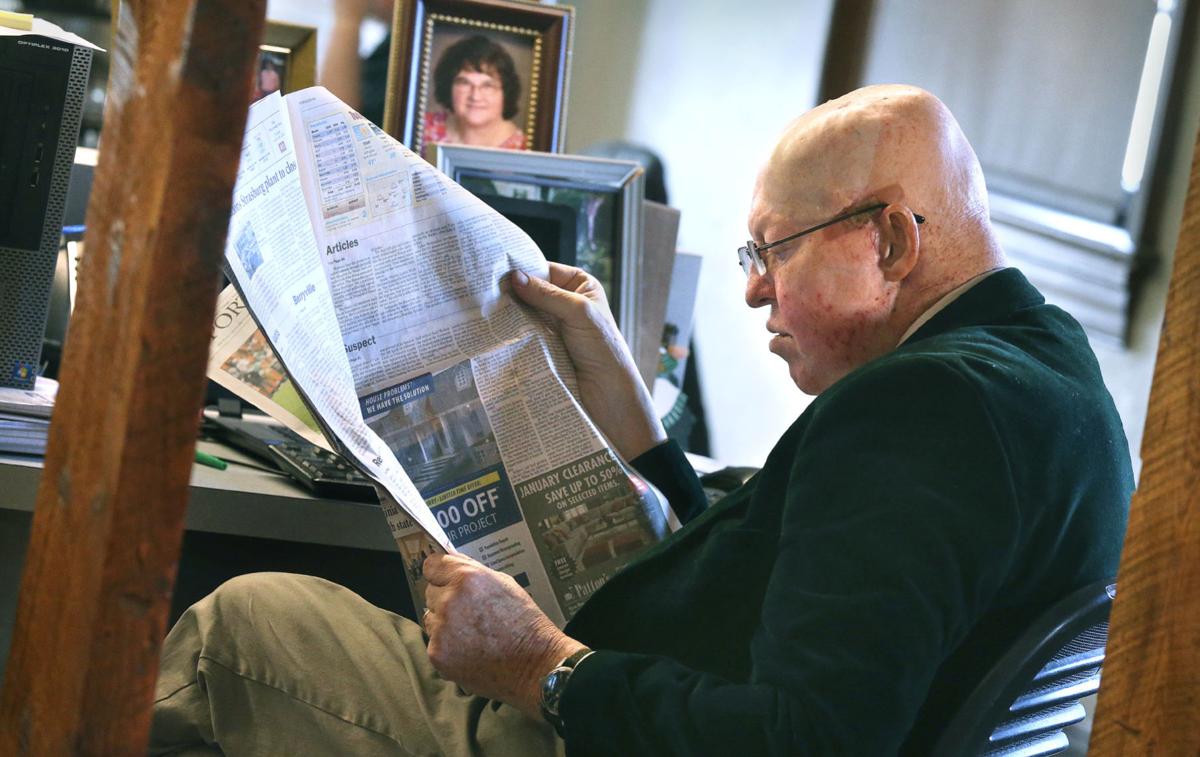 Winchester Star Editorial Page Editor Adrian O’Connor catches up on the day’s news at the start of his day. At top is a photo of his wife, Toni. 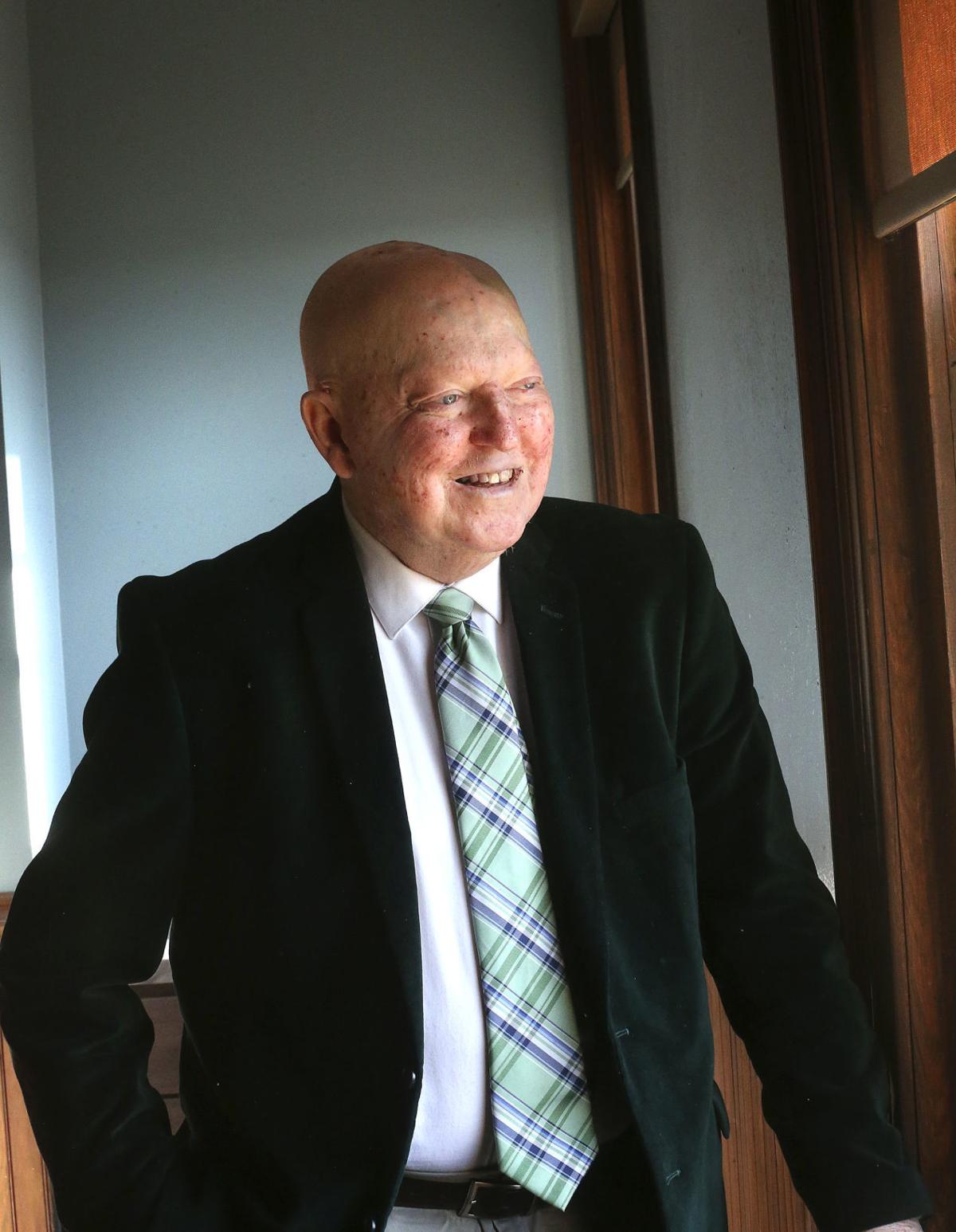 Adrian O’Connor is retiring today after 27 years as The Winchester Star’s Editorial Page editor. His 40-year career in journalism included a stint at the Danville Register & Bee. 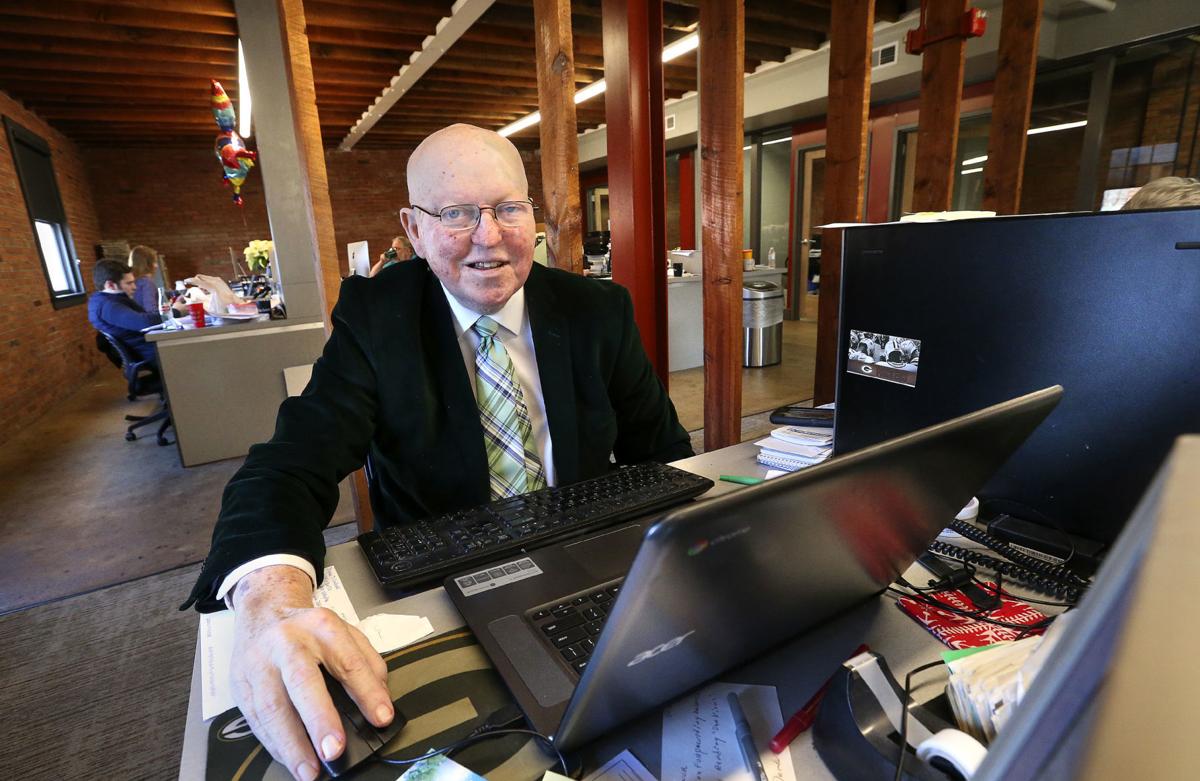 Adrian O'Connor at his desk at The Winchester Star. He is retiring today after penning countless editorials and Valley Pike columns during his 27-year career at the newspaper.

Winchester Star Editorial Page Editor Adrian O’Connor catches up on the day’s news at the start of his day. At top is a photo of his wife, Toni.

Adrian O’Connor is retiring today after 27 years as The Winchester Star’s Editorial Page editor. His 40-year career in journalism included a stint at the Danville Register & Bee.

Adrian O'Connor at his desk at The Winchester Star. He is retiring today after penning countless editorials and Valley Pike columns during his 27-year career at the newspaper.

WINCHESTER — The man who has given voice to The Winchester Star’s Editorial Page for nearly 30 years is signing off.

Adrian O’Connor, 65, will leave the newsroom today and quietly segue into a well-deserved retirement with his wife of 21 years, Toni Korb O’Connor.

His departure will be both mourned and celebrated. That’s because O’Connor’s daily opinion pieces were loved by some readers and hated by others.

Regardless of how people felt about his editorials, O’Connor impressed everyone he met as a fair-minded professional with a generous heart, expansive vocabulary and elegant writing style.

“Adrian is a dear friend, and while we disagree on almost everything, we would never let that diminish our friendship,” said former Virginia senator H. Russell Potts Jr. of Winchester. “Adrian loves Winchester, Frederick County, the commonwealth of Virginia and this great country. He is a staunch defender of liberty and our democratic process, and he has inspired us to pay attention to what is going on in our country.”

Potts, a Republican who turned independent for his 2005 run for Virginia governor, was among dozens of high-profile political and community leaders who would make regular pilgrimages to O’Connor’s office to discuss topics ranging from government operations to the latest inductees into the National Baseball Hall of Fame.

“I have known and appreciated Adrian since I was an unknown mayor from Richmond trying to introduce myself to Virginia voters when I ran for lieutenant governor in 2001,” Kaine said this week during a break in the Senate’s impeachment trial of President Donald Trump. “We’ve hardly ever agreed on anything, yet I always find my visits with Adrian to be civil, intellectually challenging and fun. I will miss those visits.”

Democrat Mark Warner, another former Virginia governor who now represents the commonwealth in the U.S. Senate, also was a frequent guest.

“I’ve known Adrian ever since I got involved in Virginia politics,” Warner said in an email this week. “I know his love of baseball and the Valley. While we didn’t always see eye to eye, particularly once I came to Washington, I knew he was always thoughtful, informed and willing to listen. I wish him all the best in his next stage in life.”

O’Connor came to work at The Star on Dec. 7, 1992, to give the paper its conservative voice via the editorial page.

He had been working as a sports, editorial and feature writer at the Danville Register & Bee in southern Virginia, where he was happy but looking for a change. He answered a “help wanted” ad in The Washington Post and drove north to meet with Thomas T. Byrd, who at that time was The Star’s general manager.

“It was obvious he wanted somebody who would be compatible over a long period of time,” O’Connor said. “We were on the same page.”

For 25 years, his writings reflected the conservative stances of the Byrd family, which owned and operated The Star. That frequently brought him under fire from readers who disagreed with his editorials, but he stood behind his work and, on a personal level, tended to agree with the political opinions of his employers.

Sometimes, former Star publisher and retired U.S. senator Harry F. Byrd Jr. had to remind O’Connor to ease up on the fire-breathing rhetoric.

“I can remember a couple of times when the senator would come in and say, ‘The opinion’s right, but tone it down,’” O’Connor said. “I was not allowed to take as many pot shots as people think.”

Regardless, O’Connor still managed to infuriate some people with his editorials, and those readers were never too shy to share their anger.

“I took it as part of the job,” he said. “They’re responding to something that I wrote that made them as angry at me as I could be at them for some of the things they’ve said about me.”

On April 1, 2018, the Byrd family sold The Star to Ogden Newspapers of Wheeling, W.Va. O’Connor’s editorial duties continued under the new ownership. A bigger challenge came one year ago, when The Star moved from its longtime home at 2 N. Kent St. to the former F&M Bank Building at 100 N. Loudoun St. on the Loudoun Street Mall.

In its new location, The Star’s news, editorial, production and administrative staff share a large, open space, so O’Connor had to leave behind the solace of a private office and adjust to a much busier and noisier environment.

“It hasn’t been that big of a problem,” he said. “I’ve not experienced the writer’s block that I might have expected because of the sound.”

O’Connor also authors the weekly Valley Pike column, which has appeared in The Star’s Local section since 1997. The column foregoes divisive opinions about politics and instead serves up homespun tales about people and places in the Northern Shenandoah Valley.

Many of his Valley Pike columns were highly personal, so readers gained greater insight into the man behind the editorials. One of the things O’Connor shared, for example, was information about his ongoing health problems.

O’Connor received a kidney transplant four years ago. The new kidney continues to function perfectly, but the transplant led to the development of a blood clot and, a short time later, squamous cell carcinoma, which is a form of skin cancer.

“People who have had kidney transplants, and also have fair skin and spent a lot of time in the sun as a kid, are susceptible to it,” O’Connor said of the cancer. “The transplant triggered it because of the immunosuppressant drugs I was taking.”

To date, O’Connor has had a half-dozen surgeries and 87 radiation treatments and is currently undergoing immunotherapy so his body’s immune system has a better chance of eliminating the cancer.

“It’s a very wily disease that’s hard to catch up with,” O’Connor said. “There are a lot of options for trying to treat it, and I’m on the third option.”

While his health problems and related medical treatments have been difficult, O’Connor said they were not the only factors that led to his decision to retire as Editorial Page editor.

“I’ve done the job for such a long time,” he said. “It’s not that I dislike what I do, but I was trying to be a full-time employee, a full-time patient ... and a part-time caregiver [for his 94-year-old mother-in-law].”

O’Connor first started thinking about retirement in 2016 when his wife retired from her teaching job. He figured he would either step down when he turned 66 in May or when he celebrated his 40th anniversary as a journalist in February.

Last month, he realized there was no reason to wait for those milestones. He set Jan. 24 as his official retirement date.

“When Toni and I went to apply for her government benefits, she was so relieved and so happy,” O’Connor said. “I left there thinking, ‘Forty is just a number. I don’t have to wait.’”

Following a farewell party today at The Star, O’Connor will officially enter the next stage of his life. He plans on getting some long-overdue rest and relaxation, scratching a few items off his “honey-do” list, and doing some writing — possibly an occasional column in The Winchester Star, maybe a nonfiction book he’s been contemplating for several years.

“Emily and I wish he and Toni all the love, good health, happiness and a fantastic ride into the sunset,” Potts said. “Happy trails.”

May God continue to bless Adrian O'Connor. He was raised in New Jersey, began his career in Danville, VA and ended it here in the the Lower Shenandoah Valley.

Enjoy your retirement, I always enjoyed reading your editorials, you have the courage to follow your principals & not seek popularity, fully knowing you would face an onslaught daily from some. I commend you for that, being true to one's own self & your values. Take some fishing trips, it works for me.

Thank you for the time you took mentoring local students. Our daughter fondly recalls her time with you in GIS. Wishing you a blessed retirement. You have made quite a splash with your distinguished career.

Happy retirement Adrian, may it be long and healthy!! God bless.

Good luck in your future. I will miss your insight and intelligence. So will most of Winchester and surrounding areas. You are my friend!!

May you be blessed in your retirement.

The epitome of a true gentleman. Shared his honest opinions and posted even the most vocerous tirades against him, never responding in kind. God bless you, sir.

I wish you happiness in your retirement, and may you never be bored!!

Mr. O'Connor. I agree with Joe Crane that you will sourly missed for your great writing, which I feel is now becoming a lost art form. My husband & I really enjoyed your articles pertaining to dive diners and bars that no longer exist. We wish you and your wonderful wife great joy, peace and good health in your retirement. God Bless!!

I will truly miss Mr. O'Conner and his superb talent for writing! I do hope we see continued Valley Pike articles submitted by Mr. O'Conner from time-to-time. Your retirement is well-deserved and I pray you enjoy many more years doing the things you love to do. Hope the Newtown Heritage Festival is still on your list!

I think you got it right, he'll be sourly missed.

Dare we hope for a more fair and balanced opinion editor at the Star? To reflect the ever more progressive, liberal population of its readership? Will Ogden be better than the Byrds? Waiting to see......

Dare we hope you would have a little more decency instead incessantly whining about how you wish everything fit your disordered world view?

Always the a$$hat aren't you slowe. You are a vile, evil little person

Worth hoping for. The alternative is the Star will continue to lose readership and sink further into irrelevance.

Mr. O'Connor, you will be sorely missed! Thank you for your years of dedication to the Winchester Star and our community at large. Enjoy your retirement! God bless.