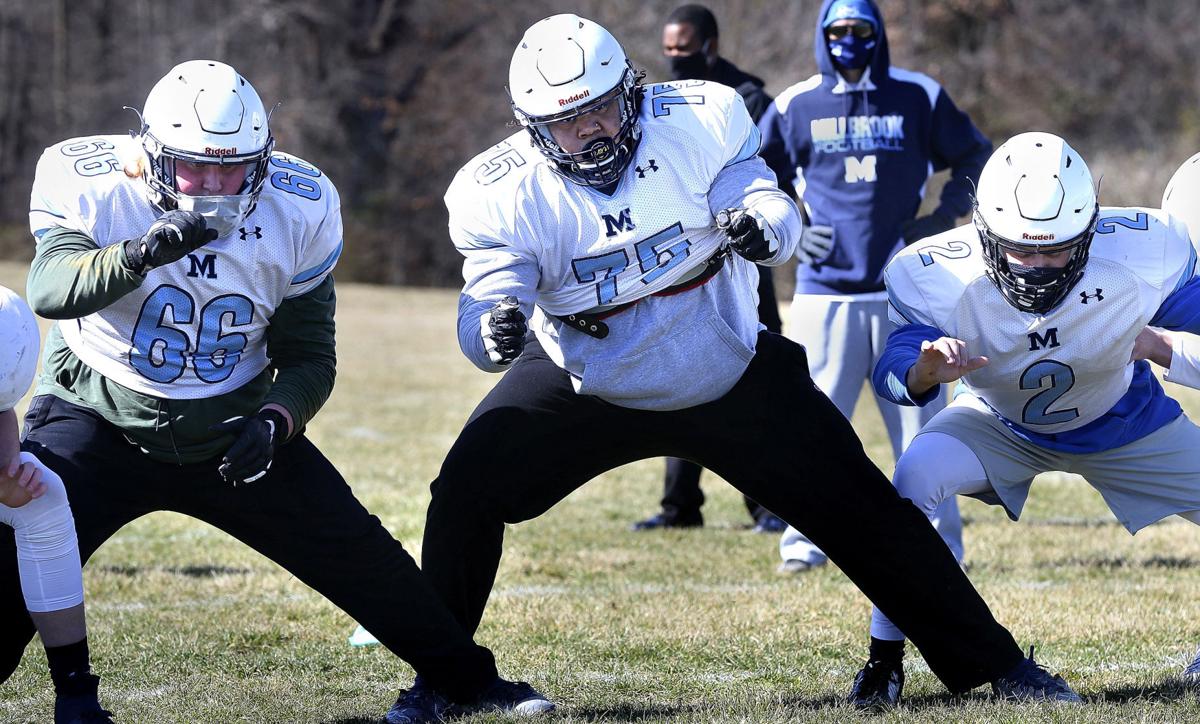 Millbrook junior Dejon Baylor (center) works out during a special teams drill last week. The 6-foot-4, 315-pound Baylor will play a large role on the offensive and defensive lines, which both figure to be a strength for the Pioneers this season. Millbrook opens its four-game season on Thursday at Sherando. 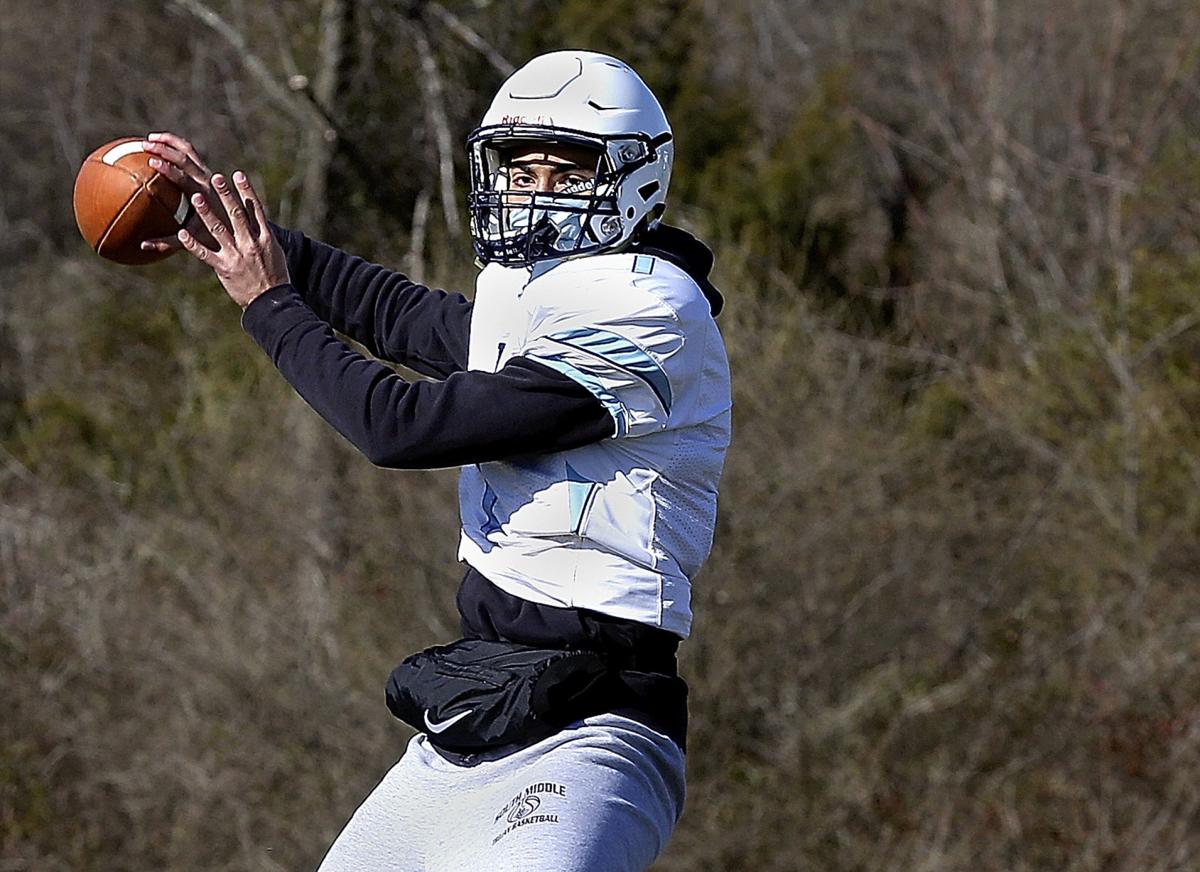 Millbrook sophomore Detric Brown takes over as the starting quarterback for the Pioneers this season. 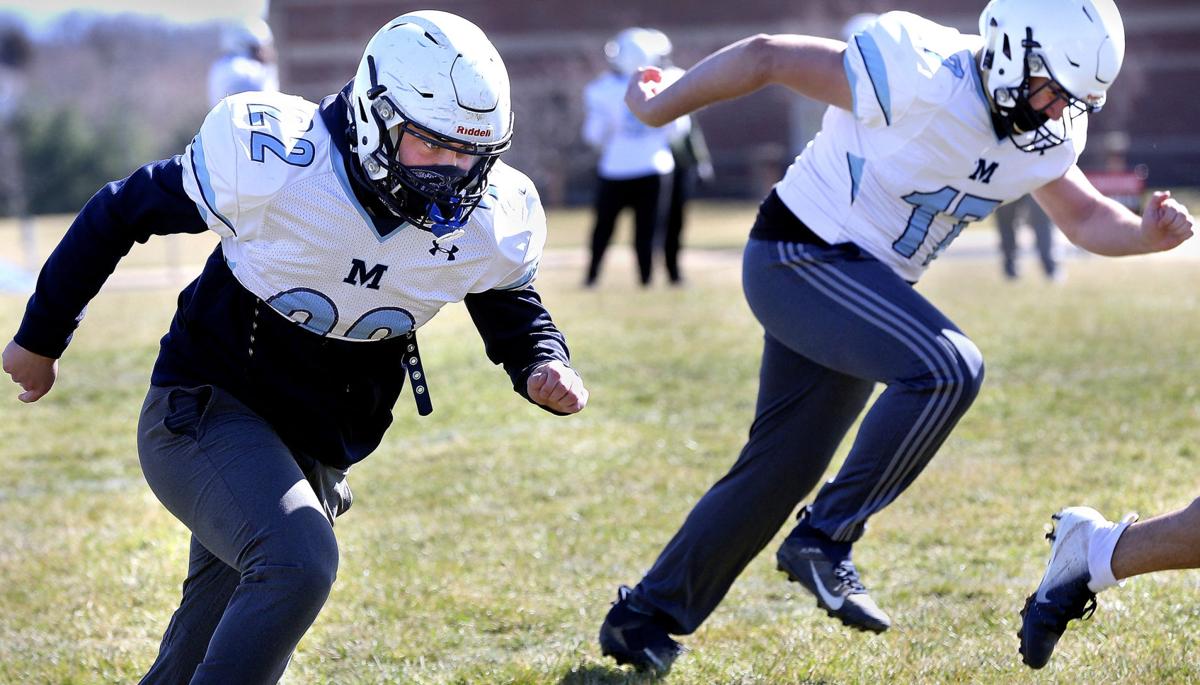 Millbrook junior Dejon Baylor (center) works out during a special teams drill last week. The 6-foot-4, 315-pound Baylor will play a large role on the offensive and defensive lines, which both figure to be a strength for the Pioneers this season. Millbrook opens its four-game season on Thursday at Sherando.

Millbrook sophomore Detric Brown takes over as the starting quarterback for the Pioneers this season.

WINCHESTER — After walking around the field in between plays and suggesting it was a bad idea for Millbrook to send running backs in his direction at a recent practice, 6-foot-4, 315-pound junior defensive tackle Dejon Baylor announced a change of heart.

“Run at me!” Baylor said loud enough for anyone within at least 100 yards to hear. “Please!”

After having their season delayed more than seven months by the COVID-19 pandemic, any day on the football field is a good day. Millbrook coach Josh Haymore doesn’t want his players to forget it.

“I want these kids to have fun,” Haymore said. “The seniors deserve as many games as they can get in, and to have fun. To leave on a positive note and know their last four games during this whole COVID situation with guys they’ve played with for years were the most fun they had.

“I want to get the reps in and I want to win the games. But the main thing is having fun. The wins will come if you if you have fun while you’re practicing hard and working hard.”

And Millbrook’s 37 varsity players have indeed worked hard over the past year while preparing for the 2020-21 season. The start of the season was delayed twice due to the COVID-19 pandemic, but the Pioneers are set to open their four-game season at Sherando on Thursday. Millbrook will play the Warriors twice, James Wood once, and one of the Class 4 Northwestern District teams that doesn’t make the playoffs on April 9 or 10.

“[Last spring], the kids really took a hold of the challenges, the at-home workouts that we gave them,” said Haymore while standing on one of the Pioneers’ practice fields. “Then we did some outdoor workouts here last June, and they were hungry. They’ve been disappointed [by the delays and limitations], but they understood we were working hard to get them on the field.

“They’ve helped each other stay focused on what we had as a goal, which was to be out here together and be the best we can possibly be.”

The team that the Pioneers will put on the field this April will look a lot different than the one people saw in 2019. Eight players from that team signed to play in college, and their leading tackler Aidan Haines is now playing at Handley.

All players mentioned are possible starters and not official.

His replacement is sophomore Detric Brown, the younger brother of former Millbrook starting quarterback Isaac Brown, a redshirt sophomore wide receiver for the University of Richmond. Haymore said Brown’s ability to run will definitely give defenses something to think about when he makes read-option movements with the football.

“He has knowledge of the game, and it continues to improve,” Haymore said. “We have a couple of plays that he has the ability to change the play, and he has no problems with that whatsoever. He understands what he has to do out there.”

Millbrook’s only returning Class 4 All-Northwestern District player is senior Diante Ball. He was honorable mention as a wide receiver (35 catches, 510 yards, five TDs), but he’ll be starting at running back this year.

Ball recorded 50 carries for 295 yards (5.9 yards per carry) and four TDs last year, most of which came when Gavin Evosirch was injured. Evosirch (1,370 yards and 16 TDs rushing and receiving combined) is at Ohio Wesleyan with Buza. Millbrook will also look to senior Jayden Banks and senior Logan Hartigan at running back. Hartigan is a newcomer who will play baseball for NCAA Division I George Mason next year.

Ball is the only one of Millbrook’s top five reception leaders who is back from last year. (Jordan Jackson, now at NCAA Division II Frostburg State, led this group with 49 catches, 10 TDs and a school-record 1,043 receiving yards in 2019.) The Pioneers will look to senior Josh Mihill, junior CJ Standen and senior Jacob Ford to lead this year’s receiving group, and Hartigan should also see time at receiver.

On the offensive line, Baylor returns as a starting left tackle. Juniors Edgar Rivas (left guard), Anthony Castillo (center), Landon Anderson (right guard) and senior Dalton Tusing (right tackle) could make up the rest of the starters up front. Rivas and Tusing also have starting experience on an offensive line that lost Tyler Duckstein, who has started all three games of NCAA Division III Bridgewater’s games at right guard this year.

“They’re 1,300 pounds across the board,” Haymore said. “That’s some weight up there. Castillo’s the shortest and weighs the least, but he’s got some heart. He plays a lot bigger than he actually is. I think the line will be a big strength. We’ve got some dudes who can play, and we’re deep.”

Millbrook, which runs a 4-3 defense, plans on using plenty of people on the defensive line. Possible starters at tackle are Baylor and Castillo (24 tackles, 2.5 sacks), and the ends will likely be Banks and senior Chris Leverich (30 tackles, team-high three sacks). Junior Jacob Zavatson is another player who should factor in up front.

Haymore has high expectations for the defensive line. Baylor focused exclusively on offense last year, and Haymore thinks he’ll have a big impact.

Milbrook’s secondary will possibly feature Ford and junior Joaquin Canada at the cornerback spots and Ball (55 tackles) and junior Braden George (30 tackles) at safety. Cornerback TJ Spain, now at NCAA Division II Shepherd, recorded seven interceptions to lead the area last year. Haines was a safety who had 103 tackles and five interceptions in 2019.

For special teams, Millbrook returns its kicker in junior Patrick Sigler, who made 33 of 40 extra points and his only field goal attempt last year. Punting will be sophomore Carl Keenan, who averaged more than 32 yards on almost 10 attempts as a secondary option to Evosirch in 2019.

With seven players who accounted for 13 All-District spots no longer on the team, the Pioneers will look different. But Millbrook has also posted a 41-16 record with five playoffs berths the last five years, so the Pioneers don’t plan on having different results.

“I really just want to go undefeated as a team,” Ball said. “I think we have a lot of potential this year. I think people are doubting us because we lost a lot of people, but I think we’re going to be perfectly fine.

“I’m looking forward to this year. I’d be excited even if we were only playing one game. I’m ready to go.”