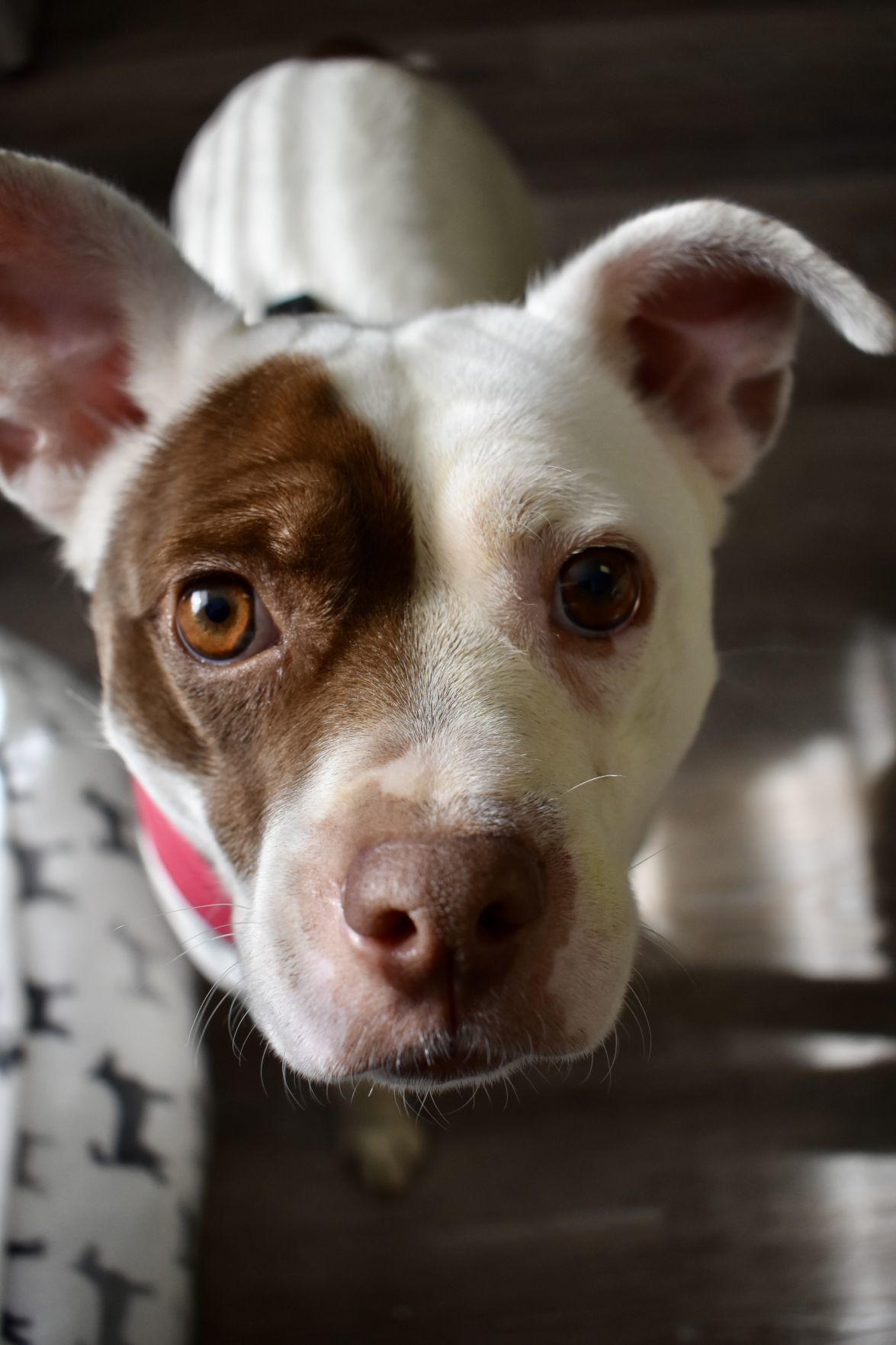 Girl settles into her new home Monday at the Winchester Rescue Mission on North Cameron Street. The formerly homeless dog was adopted by mission staff from the SPCA of Winchester, Frederick and Clarke Counties. 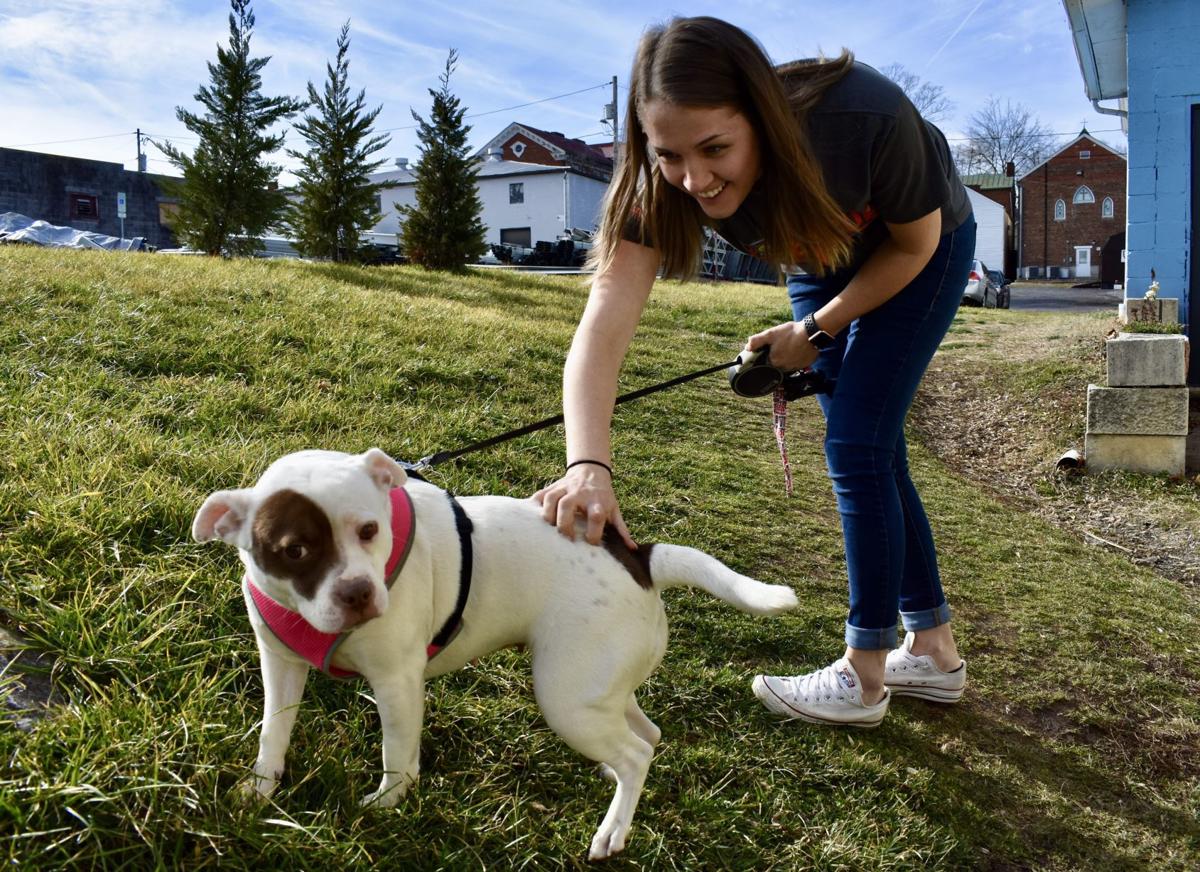 Girl stops Monday for a scratch from Lauren Clouse while taking a walk outside her new home, the Winchester Rescue Mission at 435 N. Cameron St. Girl was raised by a homeless man in Winchester who had to surrender her to the local SPCA.

Girl settles into her new home Monday at the Winchester Rescue Mission on North Cameron Street. The formerly homeless dog was adopted by mission staff from the SPCA of Winchester, Frederick and Clarke Counties.

Girl stops Monday for a scratch from Lauren Clouse while taking a walk outside her new home, the Winchester Rescue Mission at 435 N. Cameron St. Girl was raised by a homeless man in Winchester who had to surrender her to the local SPCA.

WINCHESTER — Owners of pets adopted from shelters like to ask, “Who rescued who?”

Thanks to Girl and her new owners, that question has never been harder to answer.

At noon on Monday, a 2-year-old, 30-pound, mixed-breed dog named Girl was rescued from the SPCA of Winchester, Frederick and Clarke Counties by staff at the Winchester Rescue Mission. Less than two hours later, the formerly homeless dog was making herself right at home in the mission’s shelter for homeless men.

Vicki Culbreath, the Rescue Mission’s development coordinator, said staff first started thinking about adopting a dog six weeks ago, after noticing the positive reaction of mission residents every time someone would bring in a pet for a visit.

“We reached out to the SPCA, and they were keeping their eye out for us,” Culbreath said.

Meanwhile, a homeless man in Winchester who had raised and cared for Girl needed a warm place to sleep, so he contacted the Winchester Area Temporary Thermal Shelter (WATTS) program, a coalition of local churches that provides free overnight accommodations during the winter.

WATTS doesn’t allow pets, so the man had to make the heartbreaking decision last week to surrender his beloved Girl to the SPCA at 111 Featherbed Lane.

Lavenda Denney, executive director of the Winchester-based SPCA, said Girl was in good health and had obviously been loved by her owner.

As SPCA staff prepared to add Girl to its roster of adoptable pets, Rescue Mission workers stopped by the animal shelter last week to see if any new dogs had arrived. Assistant Shelter Manager Billie Guidry invited them to meet Girl, who understood homelessness more than any of them ever could.

Girl was vaccinated, spayed and microchipped on Thursday, and the SPCA waived its standard adoption fee so she could become an official resident of the Winchester Rescue Mission on Monday.

It only took about five minutes for Girl to settle into her new home. As she laid on a cushion surrounded by a dozen dog toys, she was swept up in the love and affection of staff and residents at the mission at 435 N. Cameron St. Some members of her new family even swore that she was smiling.

“Everyone is ready to walk her, take her out, love on her,” Culbreath said.

To celebrate Girl’s fresh start, mission staff and residents are suggesting new names for her.

Winchester Rescue Mission residents will vote on a name during a house meeting on Wednesday morning.

In addition to bringing joy and companionship to mission residents currently experiencing homelessness, Girl (or whatever her name will be) will be called on by staff to help new residents open up about their circumstances so they can start getting their lives back on track.

“It’s easier to talk about hard topics when you’re loving on a dog,” Culbreath said.

In Girl’s case, the opposite is equally true.

“I can’t think of anything better than her being around the people that her owner knew and loved,” Denney said.

Mission officials are hoping Girl’s previous owner will be able to stop by for a reunion with the dog that he loved and protected while navigating the dangers of living on the streets.

“We’ve let her former owner know that he can come by and visit her,” Culbreath said.

Later this year, the SPCA plans to launch a new program called Pets for Life that could help avoid further heartbreaking separations caused by homelessness and other financial difficulties, Denney said.

“It will hopefully be funded by grants and give us the opportunity to have financial resources to help pets stay with their owners, instead of us having to find new homes for pets that are already loved by owners who have some sort of circumstance,” she said.

For more information about the SPCA of Winchester, Frederick and Clarke Counties, visit winchesterspca.org. To learn more about the Winchester Rescue Mission, visit winrescue.org

Watts cannot deny a dog if its a service animal or emotional support.we had a service dog and wasnt as allowed to enter the mission. Another reason i hate these places

I LOVE this article!! I think her name should stay Girl.. as an honor to her former owner and since that’s what she’s used to💕 Good luck “Girl” in your forever home, I hope you do great!!!

What a nice story. Thank you Winchester Star for printing something positive for a change.