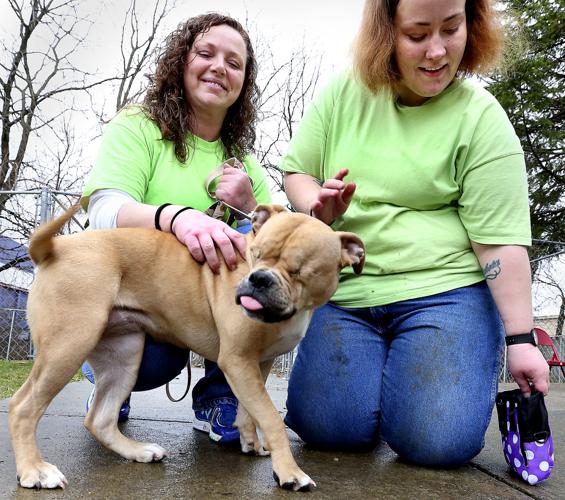 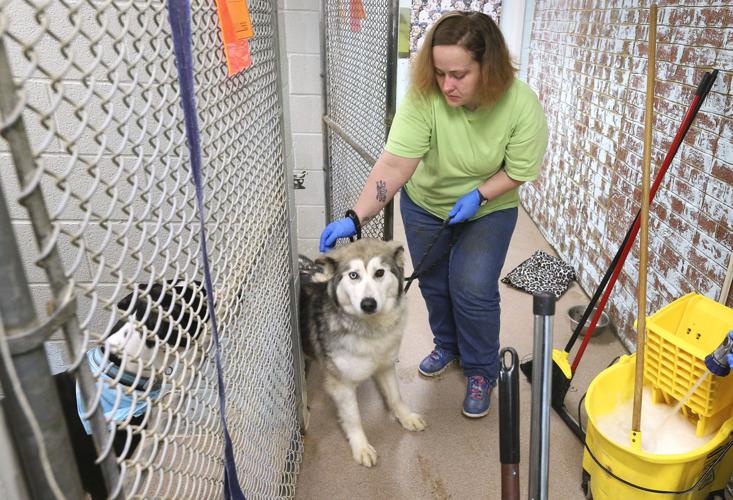 Northwestern Regional Adult Detention Center inmate Angel Hunter moves a dog so its kennel can be cleaned at the Winchester SPCA. 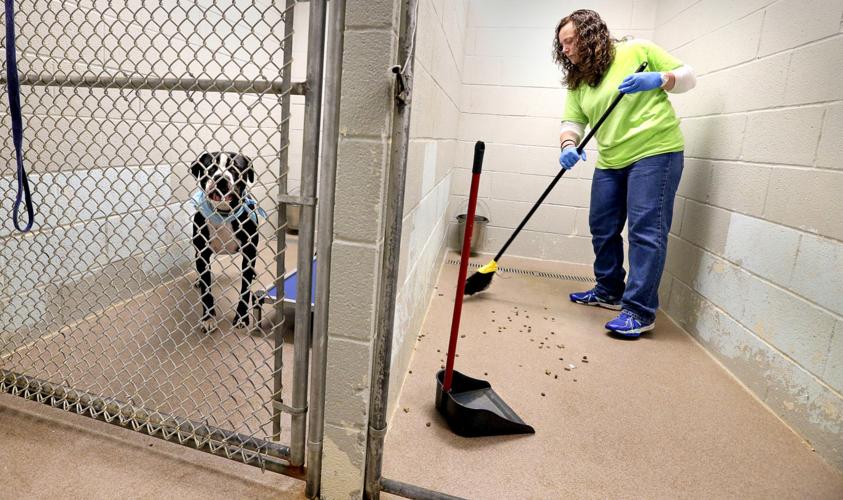 Melissa Sager, an inmate at the Northwestern Regional Adult Detention Center, cleans a kennel at the Winchester SPCA on Featherbed Lane.

Northwestern Regional Adult Detention Center inmate Angel Hunter moves a dog so its kennel can be cleaned at the Winchester SPCA.

Melissa Sager, an inmate at the Northwestern Regional Adult Detention Center, cleans a kennel at the Winchester SPCA on Featherbed Lane.

WINCHESTER — Contrary to popular belief, it’s not always a bad thing when your life goes to the dogs.

Both women are serving time for drug-related offenses, but they are turning their lives around by caring for pets that, like them, are in custody and anxious about the future.

“Working with these animals has really changed my mindset, and it gives me a purpose every day to wake up and come in here to work with them,” said Hunter, whose addiction led to a drug overdose four years ago that, for several months, robbed her of the ability to walk. “Drugs ruined my life but also made me see what the outcome would be so I could change things.”

“This motivates me, and it’s something I want to do after I get out,” Sager said about working at the SPCA on Featherbed Lane in Winchester. “I believe it will help me stay clean because I love animals so much.”

Lavenda Denney, executive director of the local SPCA, said her organization has received assistance from the detention center for more than a decade. CIWF participants traditionally tackled chores that other SPCA associates would rather not handle, but that changed in 2018.

“I felt like they really needed to learn a skill set while they were here, more than just taking out the trash or cleaning a litter pan,” said Denney, who joined the local SPCA in 2017. “So we developed a job description specifically for Work Force.”

While the job duties still include plenty of kennel and office cleaning, CIWF participants are now assigned exclusively to the SPCA’s boarding facility at 115 Featherbed Lane, where they work with a daily average of 30 homeless dogs that are not yet ready for adoption or are being held due to a pending civil or criminal court case.

Thanks to help from Hunter and Sager, the kennels are in immaculate condition, the office area is fully stocked with supplies, and the dogs are getting plenty of exercise and socialization opportunities.

The shelter’s CIFW participants work from 8 a.m. to 5 p.m., seven days a week, because, Denney said, “The animals don’t let you have a day off. They can’t take care of themselves.”

That’s perfectly fine with Hunter and Sager, who said they would rather be busy at the SPCA than bored at the detention center.

“There’s nothing to do [at the jail],” Sager said. “We’re in a pod where everyone goes out and works different shifts, so there’s nobody there during the day.”

The only downside to working at the SPCA is that after bonding with the dogs, Hunter and Sager have to say goodbye to them when they’re adopted.

“There’s one that I’m really close to that’s up for adoption now,” Hunter said. “I cry because I’m sad that he’s leaving, but at the same time, I’m happy because he’s getting a second chance to have a nice life.”

Denney said several previous CIWF workers from the detention center have come back to the SPCA after getting released from jail to adopt a pet of their own.

“It really gives them a purpose,” she said.

For more information about the SPCA of Winchester, Frederick and Clarke Counties, visit winchesterspca.org.