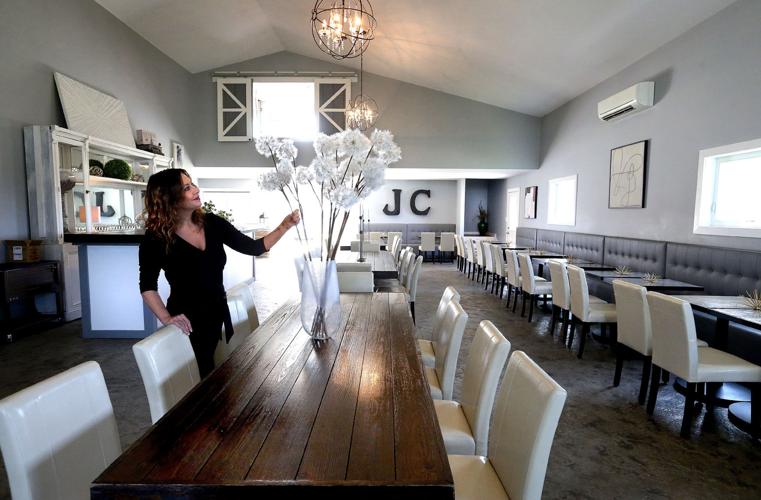 James Charles Winery and Vineyard Private Event Coordinator Tiffany Bogaty is shown Wednesday in the new salon lounge at the family-owned winery located at 4063 Middle Road in Frederick County. The winery will christen its new lounge with its first event today, a vaudeville variety performance. 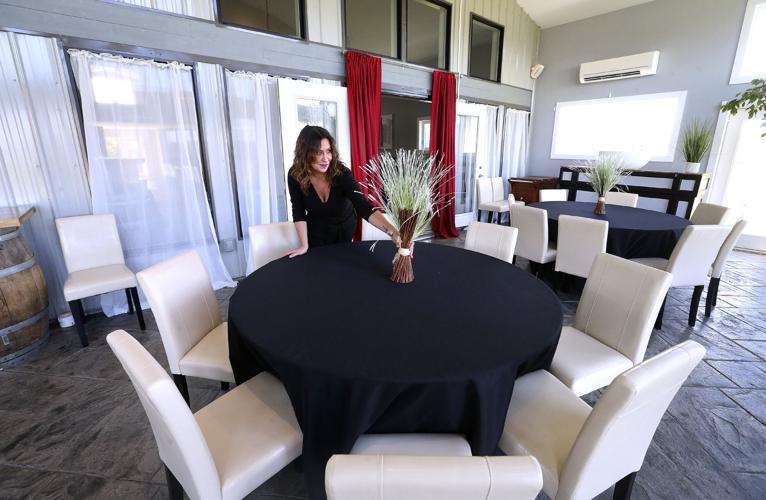 James Charles Winery and Vineyard Private Event Coordinator Tiffany Bogaty is shown Wednesday in the Terrace Room at the winery.

James Charles Winery and Vineyard Private Event Coordinator Tiffany Bogaty is shown Wednesday in the new salon lounge at the family-owned winery located at 4063 Middle Road in Frederick County. The winery will christen its new lounge with its first event today, a vaudeville variety performance.

James Charles Winery and Vineyard Private Event Coordinator Tiffany Bogaty is shown Wednesday in the Terrace Room at the winery.

The family-owned winery at 4063 Middle Road in Frederick County will kick off the event at 7 p.m. in the new salon lounge with performances starting at 8 p.m. The show will feature acts from Shenandoah University students and other local performers.

Tiffany Bogaty, wedding and event planner for the Bogaty Family Wine Group, said performances will be about 15 minutes each. Vaudeville is known as a group of performances that feature burlesque, comedy, song and dance.

Bogaty said Saturday’s event is the first of many to be hosted once a month in the winery’s new salon room.

Other planned events include a Mother’s Day brunch, a comedy night, a hypnotist show, an ‘80s band and an adult Halloween speakeasy night.

Tickets for the events must be purchased in advance. Members of the Legacy Club will receive discounts.

“Once a month, we’re going to do something,” Bogaty said. “I really want to cater more to an older crowd. It’s not a bar. It’s something to for your 30-and-up crowd.”

The room was previously used for wedding space, but Bogaty said the COVID-19 pandemic changed the outlook on large weddings for many couples. So, she said the family decided to utilize the space to host events by adding open seating.

“When COVID happened and everything shut down, everyone started to scale back and do more smaller, intimate things,” Bogaty said. “So this really opened up ideas for us. We decided to reorganize, decorate and make this into a lounge for those events.”

The salon lounge coincides with the Terrace Room, located off the back of the lounge, which is a more intimate setting that can be used for events such as baby showers or smaller gatherings.

The rooms will still be available to accommodate small weddings, rehearsal dinners and anniversary and birthday parties. Bogaty said the room can accommodate about 75 to 80 guests.

A smaller menu will be available in the salon lounge, Bogaty said. Todayls menu will include smoked salmon and chips, baked Brie, sweet chili meatballs and cheesecake bites.

She said the winery also plans on doing what she referred to as a “chef takeover,” where local chefs will work with the winery to provide food paired with the family’s wines.

Sounds too expensive for the locals in area. Must be to attract more out of town people to bring them to our area and purchase homes and condos that are not affordable to this area residents

WINCHESTER — The first day of the 2022-2023 school year was a success for Winchester Public schools on Thursday.

And when it rains on your parade, look up rather than down. Without the rain, there would be no rainbow.

WINCHESTER — Glass recycling is returning to the Frederick County regional landfill at 146 Landfill Road on Monday.

Taylor stepping down as CEO of NW Works

WINCHESTER — One week after her husband announced he is stepping down as Winchester’s sheriff to pursue another career opportunity, Debera Taylor is following suit with her job at NW Works Inc.

WINCHESTER — City Council decided on Tuesday to set aside, at least for now, any proposed changes to Winchester’s ordinance restricting the possession of guns on city property.

The Frederick County government announced Tuesday that is has swapped the collection containers for paper and plastic jugs and bottle recycling. County staff says it is much more efficient to collect mixed paper in the smaller containers and plastic jugs, bottles and jars in the larger, blue…

School Board sets public hearing for interim board position

WINCHESTER — The Winchester School Board is searching for an interim at-large board member to replace Karen Anderson Holman, who resigned July 14 after accepting a job precluding her from being an elected official.

Saying she wants to give voters a choice on Election Day, Democrat Emily Scott is running again to unseat Republican Todd Gilbert, this time for the newly created 33rd House of Delegates seat.