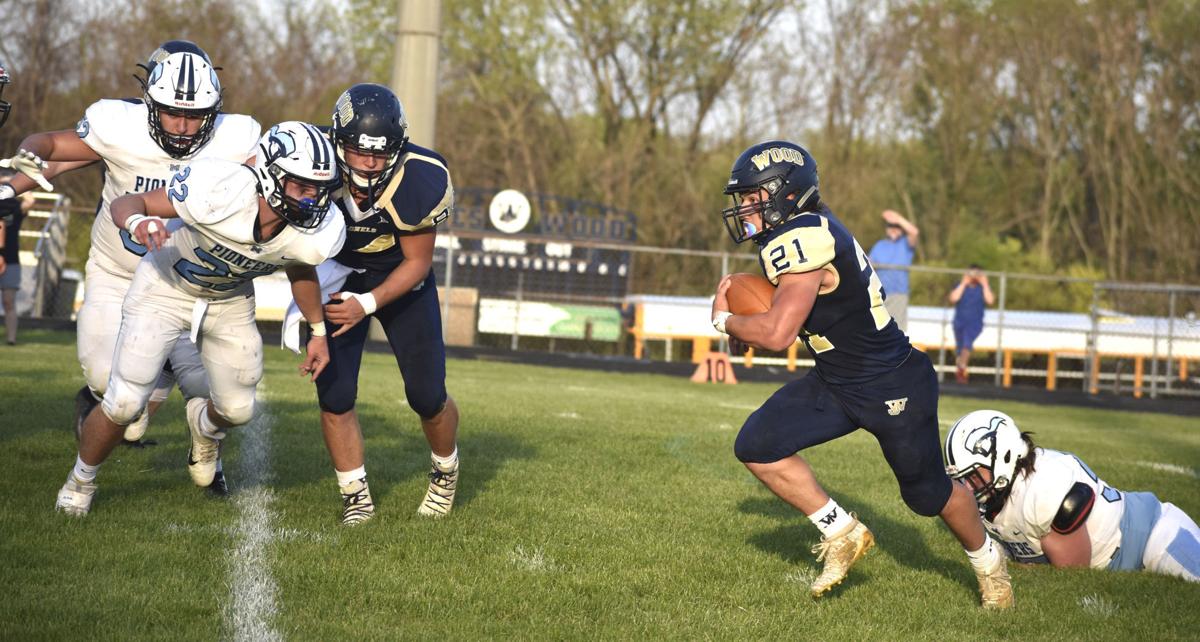 James Wood senior Joey Vitola (21) looks upfield after breaking the first of several tackles on his 82-yard touchdown run in the first half on Tuesday's 55-42 win over Millbrook at the Colonels' Kelican Stadium. 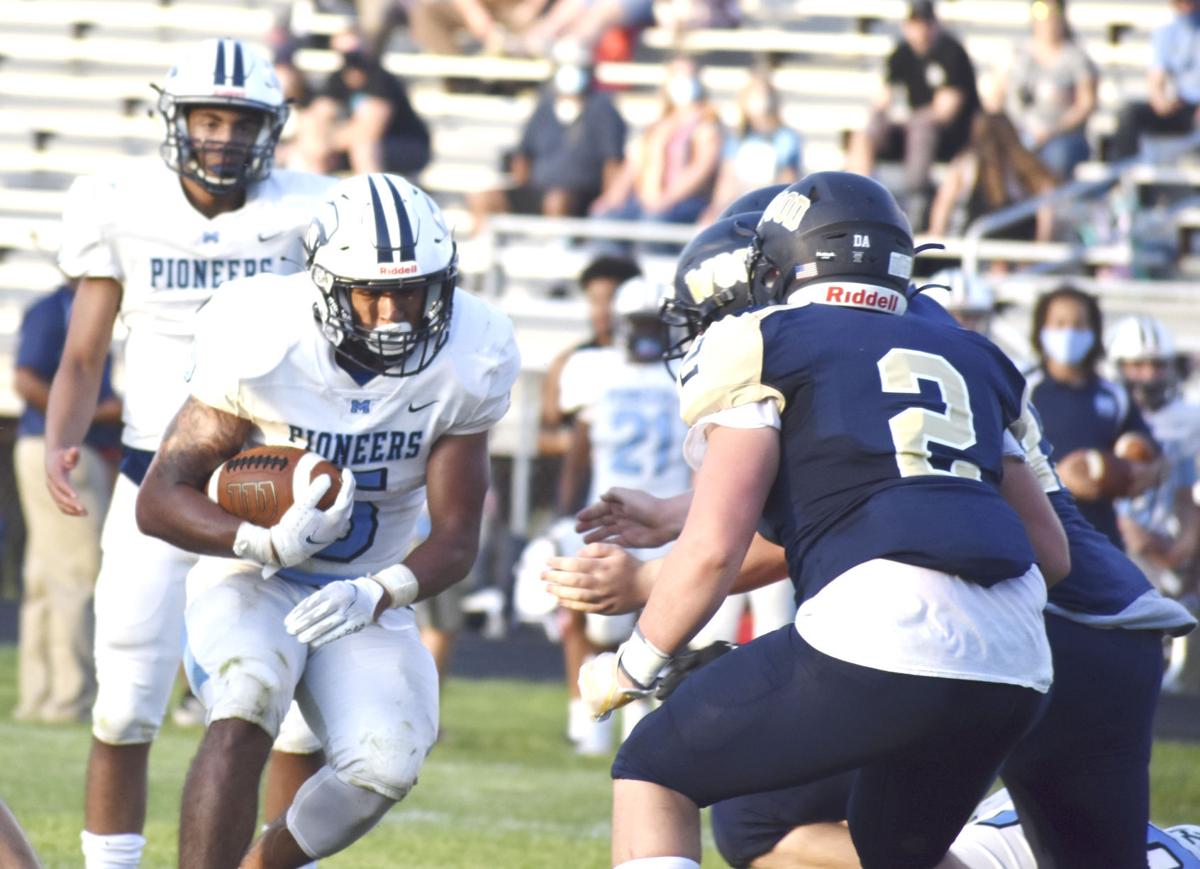 Millbrook running back Diante Ball (left) had 25 carries for 197 yards and five touchdowns in the final game of his his high school career on Tuesday at James Wood. Ball was able to push through the Colonels on this play for a five-yard touchdown with 24 seconds left in the first half.

James Wood senior Joey Vitola (21) looks upfield after breaking the first of several tackles on his 82-yard touchdown run in the first half on Tuesday's 55-42 win over Millbrook at the Colonels' Kelican Stadium.

Millbrook running back Diante Ball (left) had 25 carries for 197 yards and five touchdowns in the final game of his his high school career on Tuesday at James Wood. Ball was able to push through the Colonels on this play for a five-yard touchdown with 24 seconds left in the first half.

WINCHESTER — The 2020-21 school year has been anything but normal, and on Tuesday night, James Wood continued its destruction of the "normal" football storyline.

The Colonels rallied from a 14-point halftime deficit to beat Millbrook 55-42 at James Wood's Kelican Stadium to snap a five-game losing streak against their Frederick County rival.

The victory by the Colonels — who outscored Millbrook 35-0 in the third quarter to take a 49-28 lead — came six days after James Wood shattered a 13-game losing streak against Sherando with a 36-20 win.

This is the 18th season in which there have been three Frederick County football teams, and the only other year the Colonels beat both Sherando and Millbrook came in 2008 when current James Wood assistant principal Mike Bolin was a first-year head football coach at the school.

"It was a long road and a long fight to go through," said James Wood senior quarterback Jayson Herndon, who had 270 yards of total offense and scored four touchdowns, one on a 66-yard TD pass from junior Jaden Ashby (170 yards of total offense, 49-yard rush TD). "We didn't know if we were getting a season or not. We're glad our whole team stuck together and we were able to accomplish our goals."

Led by senior running back Diante Ball (25 carries, 197 yards, five TDs) and sophomore quarterback Detric Brown (17 of 33 for 228 yards and one TD, 18 carries for 98 yards), Millbrook certainly gave everything it had. The Pioneers (1-3) outgained James Wood 525-459, but the Colonels converted all three of Millbrook's turnovers into touchdowns. Two of them were interceptions by Brown and one was a fumble by Ball.

Senior running back/linebacker Joey Vitola's face was red as the significance of the moment came over him following his final game. Vitola joined Herndon to talk about the game after first sharing a long, three-player embrace with fellow seniors Clayton Jones and Elijah Boggs, then a long hug with James Wood assistant coach Mark Weir.

"It means everything," Vitola said quietly, though his play spoke loudly with arguably the two most electrifying scores of a 14-touchdown game. Those went for 82 yards (rushing) and 53 yards (receiving) on a night in which he had 153 total yards (101 rushing on seven carries).

Before the season, James Wood coach Ryan Morgan described this spring as a transition year for the Colonels, since they lost 22 seniors from last year's 38-player team and only had nine seniors this year.

It's hard to imagine anyone outside of James Wood's program expecting that wins over both Sherando and Millbrook would be a part of that transition.

"I felt bad for the kids who had to wait so long [to play]," Morgan said. "We wanted to give them something to remember.

"Beating Millbrook or Sherando, that would have been great. But beating both of them is a great feeling for the coaches and the players. It's great to send the players out with something positive, because this year's been so tough on them."

Millbrook was plenty tough on the Colonels in the first half.

The Pioneers scored touchdowns on their first two possessions. Ball broke multiple tackles attempts on a 63-yard TD run on the third play from scrimmage and Braden George (nine catches, 114 yards), broke a tackle after catching a pass on a crossing route inside the James Wood 25 en route to a 42-yard TD reception. Patrick Sigler kicked one of his six extra points after the latter TD to make it 14-0.

Meanwhile, the Colonels went three-and-out on their first three possessions. James Wood would score two touchdowns in the first half to keep itself in the game, but neither score came as a result of sustained drive.

Blake Hounshell's 13-yard interception return to the Millbrook 9-yard line set up a three-yard TD run by Herndon (19 carries, 108 yards, three TDs) that made it 14-7, and Vitola made the Colonels fans roar with an 82-yard TD run that made it 21-14 Pioneers with 1:41 left in the second quarter.

Vitola first broke a tackle attempt in the backfield, then after running left stiff-armed a defender to the ground at the line of scrimmage. A few Millbrook players tried to tackle Vitola from behind but he brushed off every attempt before hurling himself across the goal line.

Ball would answer with a five-yard TD run with 24 seconds left to send Millbrook into halftime with a 28-14 lead.

The Pioneers had a 329-148 yard edge at that point, and James Wood had yet to use the Wildcat formation with Ashby, which played a huge role in last week's win over Sherando. After recording 229 total yards and three TDs last week, Ashby had just one carry [on a jet sweep] for three yards at halftime.

Morgan said the Colonels were feeling things out with their offense in the first half. At halftime, James Wood decided it needed to give Ashby some Wildcat looks in the final two quarters.

"We'd run it against Sherando, and Millbrook had seen it on film," Morgan said. "We didn't want to rely too heavily on that. But we thought we needed a spark, and obviously, Jaden's a really good athlete."

On the first play from scrimmage of the second half, the Wildcat produced a boom of noise that nearly rivaled the James Wood cannon that was fired off at halftime.

After taking a direct snap at the James Wood 34, Ashby circled to the right. But instead of running forward, he brought his right arm back and let fly a pass that traveled more than 30 yards downfield to Herndon.

"I'm not going to lie. I was kind of nervous," Herndon said. "Coach called it at halftime. He said, 'They're going to bite up on Jayden because they've seen the Wildcat formation. He's going to throw it over top to you, and you're going to be wide open.'"

A wide-open Herndon caught it and turned it into a a 66-yard TD. The third of Chris Garcia's seven extra points made it 28-21 Millbrook just 25 seconds into the second half.

"Right when I saw the corner come up to contain me, Jayson was wide open," Ashby said. "Perfect play. That pass play really set the tone. After that, we just kind of took over."

James Wood's offensive line started paving clearer running paths for the Colonels backs (311 total yards after halftime), and Herndon capped the next possession with a 12-yard TD run tie it at 28.

Junior Ryan King then made a perfect read on Millbrook's ensuing possession, jumping Brown's pass into the right flat and returning it 35 yards for a touchdown to make it 42-28.

After a Millbrook three-and-out, Vitola than put an exclamation point on the 35-0 quarter.

He took a swing pass from Herndon (6 of 11 for 106 yards) in the right flat, and it appeared Millbrook was going to tackle him for a short gain. Vitola nearly went to the ground after absorbing contact, but he kept his feet and sprinted down the sideline for a 53-yard TD that made it 49-28 with four seconds left in the third quarter.

"[After catching the ball], I started going to the outside, trying to pick up as much as I can. I wanted to stiff arm, but I was in an odd position, because [the defender] was right in front of me, and my arm went to my side. I shoved him off, but I almost went down. They all thought I was down. No one was around, so I went all the way."

Millbrook would fight back behind a couple of Ball TD runs (the first went for 43 yards), but a 49-yard Ashby TD run came in the middle. Ball's last TD run, from seven yards out, made it 55-42 Colonels with 2:38 left, but James Wood recovered an onside kick and ran out the clock.

It wasn't the ending Millbrook wanted, but Ball enjoyed the season.

Ashby was glad he could help James Wood's seniors finish their home careers in style.

"This is the best feeling ever," Ashby said. "Beating two teams we haven't beat in a while, it feels great. It feels awesome."