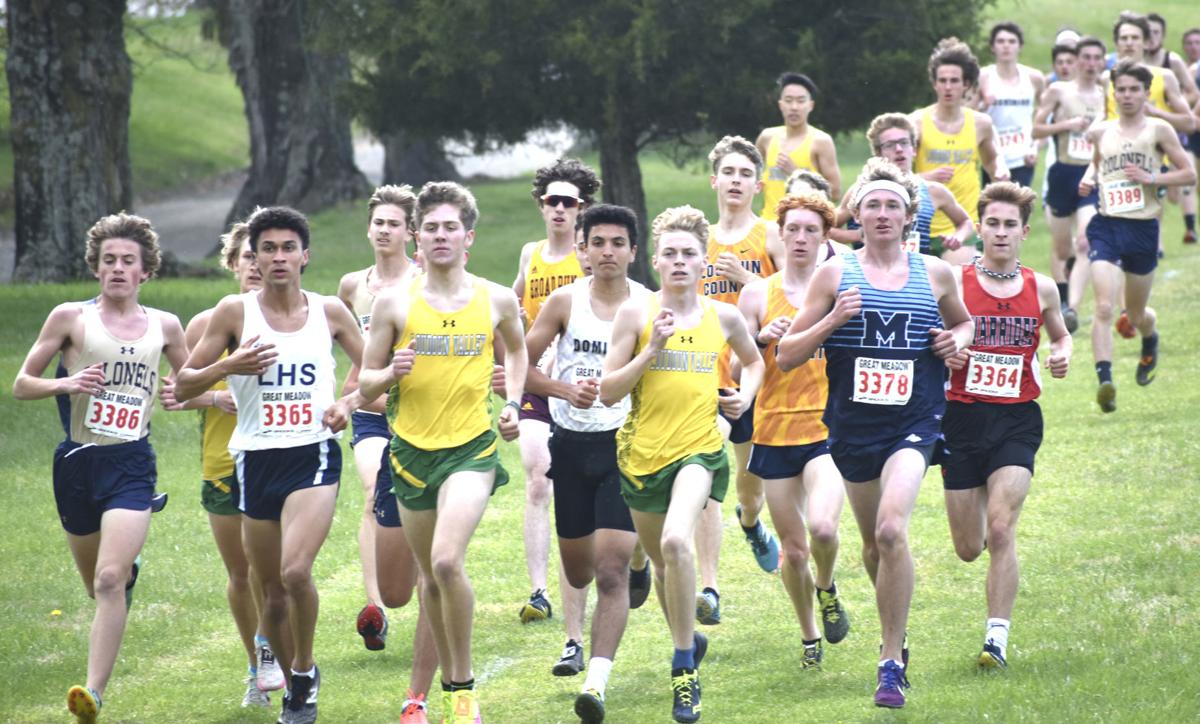 James Wood’s Nathaniel Woshner (left, No. 3386), running during the first mile of the race, led the Colonels’ boys’ cross country team to second place and its second straight state berth on Tuesday at Morven Park in Leesburg. Millbrook’s Nick Hayden (No. 3378) grabbed the third and final state individual qualifying spot. 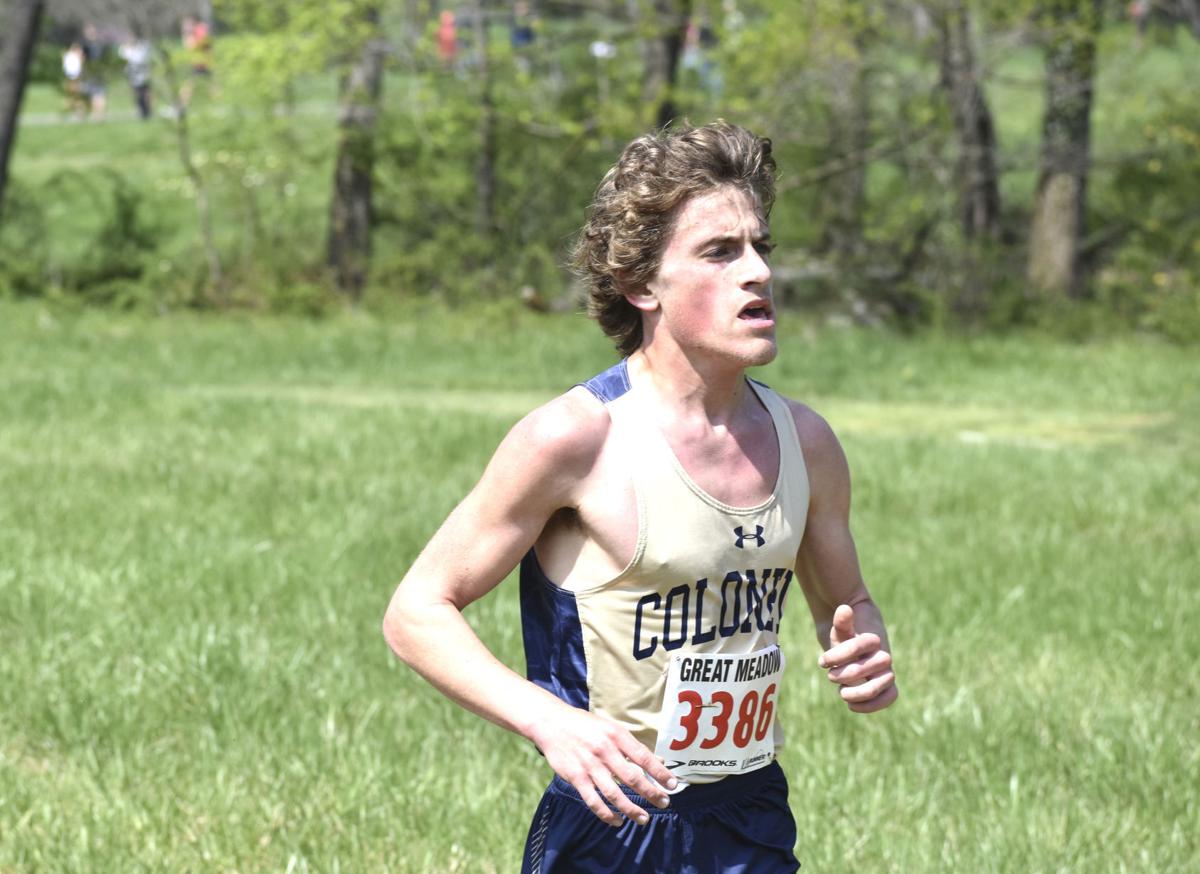 James Wood’s Nathaniel Woshner (left, No. 3386), running during the first mile of the race, led the Colonels’ boys’ cross country team to second place and its second straight state berth on Tuesday at Morven Park in Leesburg. Millbrook’s Nick Hayden (No. 3378) grabbed the third and final state individual qualifying spot.

LEESBURG — The James Wood boys’ cross country runners know what it takes to get to the state meet, and on Tuesday the veterans’ guidance paved the way for a return trip.

The top two teams at the Region 4C meet qualified for the Class 4 state meet on April 24 at The Oatlands, and the Colonels took second to five-time defending state champion Loudoun Valley at Morven Park.

The Vikings scored 20 points and James Wood had 49. Millbrook was third with 59 and Heritage was fourth with 105 on the 3.1-mile course. The top three individuals not on Loudoun Valley and James Wood also advanced, and that group includes Handley junior Nico Schianchi (fifth in 16:46.4) and Pioneers sophomore Nick Hayden (eighth in 16:57.3).

James Wood junior Nathaniel Woshner said Millbrook’s performance made him a little nervous, because the Pioneers’ No. 5 runner came in three spots ahead of the Colonels’ No. 5.

But the Colonels’ top four runners — three of whom scored points at regionals for last year’s state-qualifying team — placed ahead of Millbrook’s No. 3 runner, and that proved to be more than enough.

“We train hard,” said Woshner, who led the Colonels by placing fourth individually in 16:41. “We made it to states for a reason.”

James Wood first-year coach Matthew Lofton took his team to a training session at Morven Park last Wednesday, and he felt his runners couldn’t have navigated the hilly and muddy course any better.

“I was very happy with the way everyone raced,” Lofton said. “We were able to preview the race and make mental notes of where we need to push it, where we could maybe improve a little and have a good finish. Hopefully, that gave us an edge over the competition.”

“I think Ethan Pratt-Perez had another phenomenal race,” Lofton said. “He was able to pick up the second spot for us, the spot that Chris is normally in. I don’t think Chris was having his best day, and Ethan was able to pass him and get those extra couple of points we may not have otherwise had.”

Individually, Woshner said he was focused on place and not time, and the Class 4 Northwestern champion did his job and finished as the top runner in the district. Only Loudoun Valley’s Matthew Smith (16:24) and Aidan Soto (16:31.3) and Dominion’s Amir Aougab (16:39.3) placed higher.

“We knew coming into this race that they were probably 7 to 10 people that can win this race,” Lofton said. “I told everyone to sit back and relax and let other people dictate the pace of the race, and if you’re feeling good, take off.

“It looked like in the second half of the race Nathaniel felt good and kind of took off with the pack, and he was able to hang with the Valley guys, and have a really strong finish.”

Hayden was highly doubtful of his chances of moving on after the race, because he didn’t feel he ran well for the last two-thirds of the 3.1-mile event.

“I just decided to go for it at the start, and I definitely regret going out so fast,” said Hayden with a laugh. “I’m a little bit disappointed [with not finishing higher], but this is a lot better than I did last year (at regionals, when he placed 37th).”

Millbrook coach Jamie McCarty said Hayden might have put too much pressure on himself Tuesday, because Hayden didn’t feel he ran well at the district meet either.

“He was obviously trying to do well for himself, but he knew the farther up in the standings he was, the more it was going to benefit the team,” McCarty said. “He put himself out there, and you can never fault a kid for trying to win a race.

“I’m proud of the effort. He faded a little bit at the end, but he’s still going to states. For someone from where he’s come [compared to last year], it’s tremendous.”

McCarty was proud of his team overall, because he thought it ran better than it did at the district meet.

Schianchi felt significantly better about what he did Tuesday compared to the district meet at the Third Battle of Winchester Course. The Third Battle is basically a flat course, but Schianchi was within six seconds of his district time on Tuesday.

“I was struggling at the end of the second mile and in the third mile, but I kept going, and I made it to the end,” said Schianchi with a laugh. “This was a better race, because I didn’t use all my energy going out by myself. I just kept behind others and used them, and it helps.

“It means a lot [to qualify for states]. I had a bad race at districts, and I wasn’t sure I was able to qualify [today]. I’m happy I could put my best foot forward today.”

Handley coach Mark Stickley was impressed with Schianchi and his freshman son Garrett, who placed 14th overall in 17:09.7, three seconds faster than his district race.

“By far, that was [Schianchi’s] best race this year,” Mark Stickley said. “He was so much more relaxed. I think he was just putting too much pressure on himself early in the season and at district. He had a very good game plan and he put himself in position to make it to state. He looked under control and looked great. I couldn’t have asked for a better race.”

For the first time in his decorated career, Sherando senior James Harris will not be competing in the state meet. The two-time Winchester Star Boys’ Cross Country Runner of the Year and 2019 All-State performer wasn’t feeling 100 percent physically the past few days, and he placed 21st in 17:37.8 on Tuesday.

“I woke up on Sunday with a nasty headache,” Harris said. “I kind of felt my allergies were kicking in.

“At the start of the race, I kind of felt fine. I was in a good position, a good place to actually make a move. But right before the first mile [mark], two kids fell. I had to hop over one of them, so that kind of threw off my stride. Other than that, my body was aching, and I couldn’t really do anything about that. I tried to push through it, but I just couldn’t be where I wanted to be at today.”

Harris is proud of his running career, which looks like it will continue. One of the schools Harris is considering is NCAA Division I High Point in North Carolina.

“These past four years of high school cross country have been a blast,” Harris said. “Making memories with my teammates, making memories with the coaches, having the coaches fix my running [technique], which helped me tremendously. Making it to states my first three years is a pretty big accomplishment with the region we’re in.”

Sherando coach Megan Roberts said it won’t be the same without Harris next year.

“We’re going to miss him as a runner, as a leader, and as a person,” Roberts said. “He’s just a great kid.”