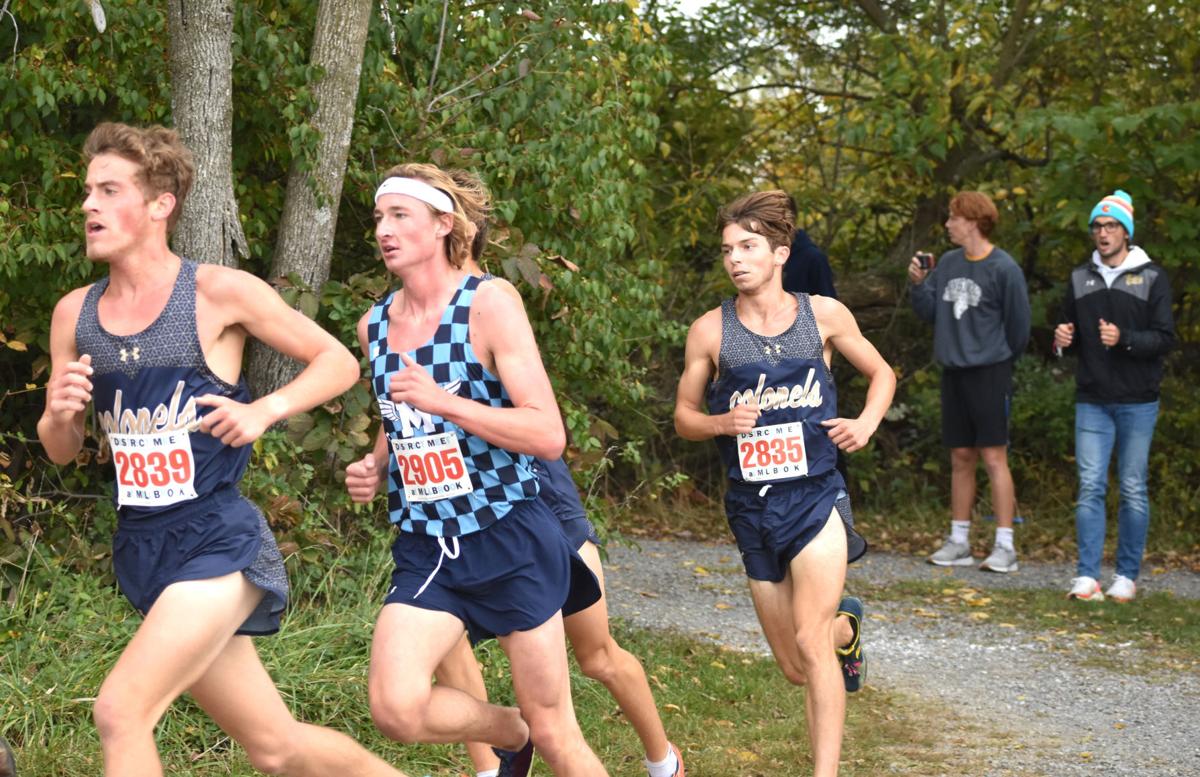 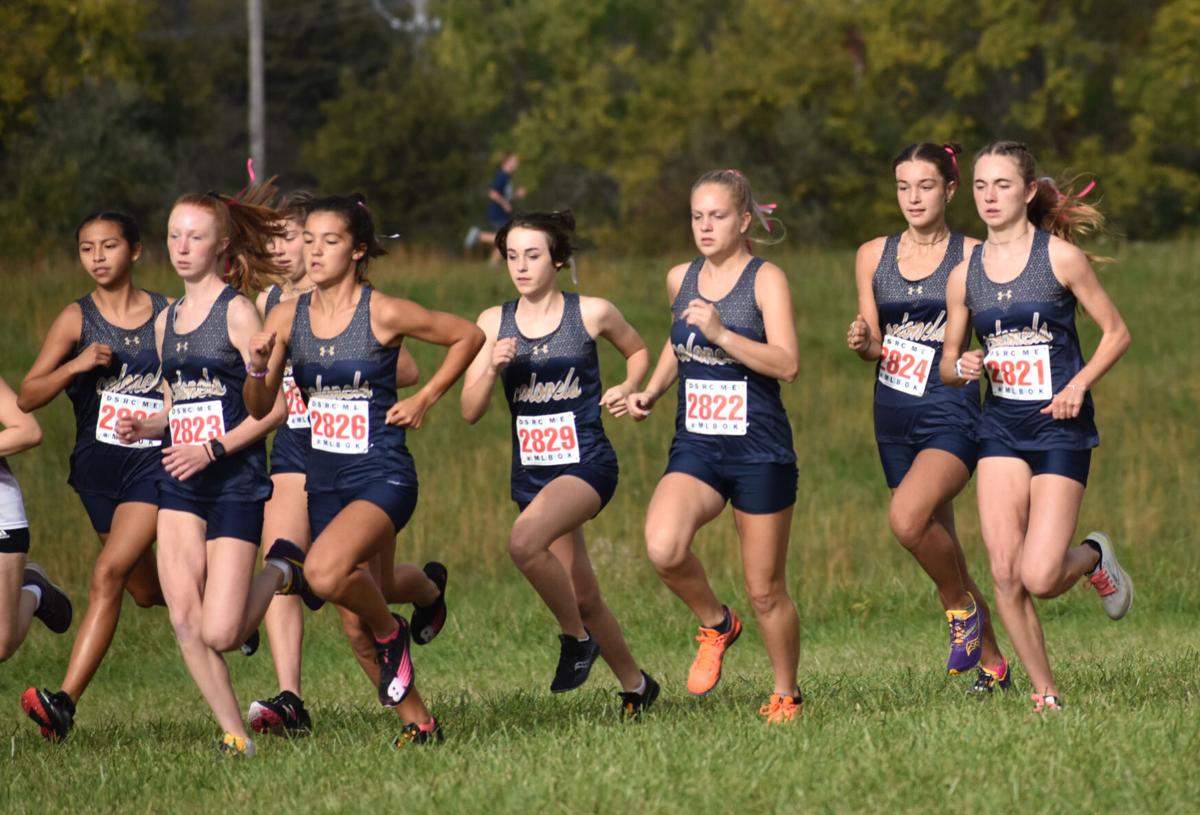 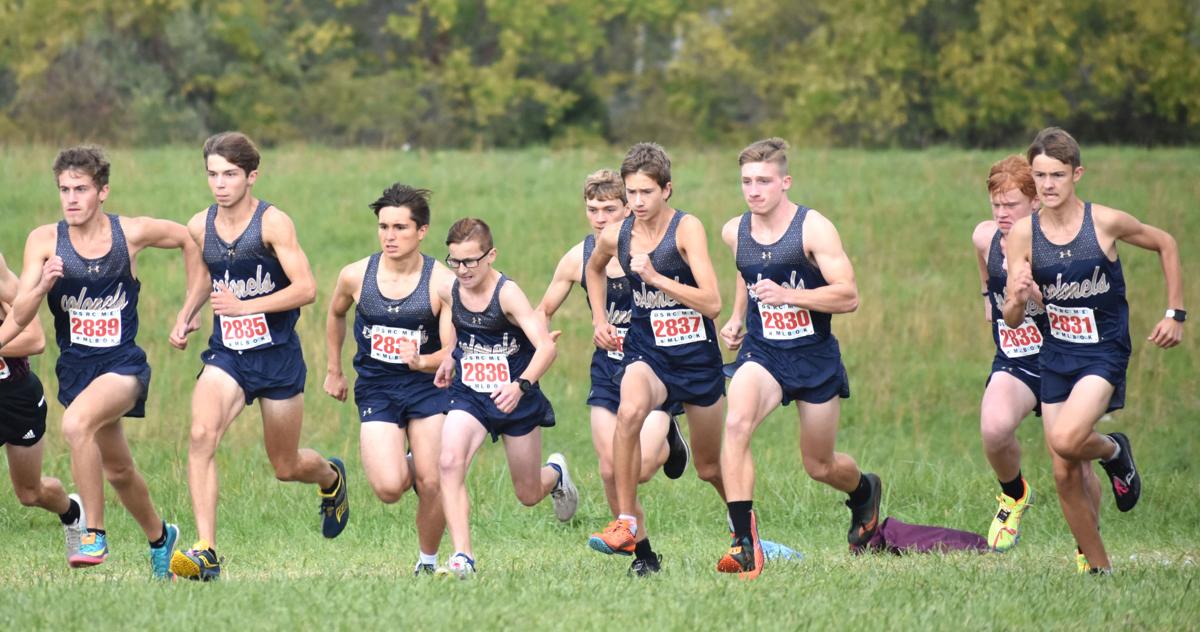 The James Wood boys break from the starting line en route to winning their fourth straight district title on Saturday at the Third Battle of Winchester course.

The James Wood boys break from the starting line en route to winning their fourth straight district title on Saturday at the Third Battle of Winchester course.

But depth is an important thing in cross country — a lot of things can go wrong over the course of 3.1 miles — and James Wood got to celebrate with a trophy yet again because its depth made the difference at the Third Battle of Winchester course.

James Wood and Handley each scored 40 points, but the Colonels won the tiebreaker of having the faster No. 6 runner to win its fourth straight district title. The Colonels' No. 6 runner finished in 21st place, 11 spots higher than Handley's No. 6 runner.

Millbrook coordinator of student activities Scott Mankins' announcement of the interesting tiebreaker scenario during the awards ceremony created the best possible photo opportunities for the Colonels. James Wood (39 points) won the girls' title by 15 points for its first district championship since 2002.

The top four teams and anyone among the top 15 individual finishers not on those teams advance to the Region 4C meet on Nov. 2 at Great Meadow in The Plains. The top 15 also earn All-District status.

Liberty (fourth with 115 points) is also advancing on the boys' side. Sherando placed seventh with 162 points but will send sophomore Dylan McGraw (14th in 16:47.4) to the region meet.

In the girls' meet, Millbrook placed second (54 points), defending champion Fauquier took third (68) and Sherando placed fourth (78) to earn the last region spot by 55 points over fifth-place Handley (133). Sophomore Cassidy Scott, the runner-up at the district meet in the spring, recorded a time of 18:07.2 to win by 37 seconds over runner-up Madison Murphy, the Millbrook junior and two-time district champion.

It's hard to be 100 percent sure of where a team stands during a cross country race due to the amount of traffic on the course and the large gaps that can exist with runners of different abilities.

There was a lot of pessimism on the part of James Wood in the boys' meet as a result of Handley's top five runners all placing in the top 12. James Wood had four in the top nine, but its No. 5 runner crossed the finish line in 20th place.

"We expected Handley to win," said James Wood senior Nathaniel Woshner, who didn't defend his individual title but took second in 15:55.2. "When we found out we won, it was awesome. It was a good race. Everybody raced well. Our top seven, we're all super together and train together.

"It means so much [to win four in a row]. Even if we didn't win this year, it still would have been three years in a row, which is really impressive as a school and as a team."

Lofton also thought the bunched-up runners at the front and the gaps between the Handley and Wood No. 5 runners would result in second place.

"I was actually shocked when [Mankins] said it was a tiebreaker," Lofton said.  "I think the team's just gotten better and better as the season's progressed. I knew we had a deep team, but I just didn't think we'd be this good. It's been really great seeing their progress.

"I think Jacob stepped up big for the team today. He ran a huge PR, about 30 seconds. He was in the mix with the top guys halfway. I think he was probably pretty crucial for us."

"That was an exciting race from start to finish," Handley coach Mark Stickley said. "I think we ran as well as we could have today. [The Colonels] brought their 'A' game, we had our 'A' game, and you see how it plays out. We lost, unfortunately, but it played out great. Every one of my top 5 got [personal records] today.

"We were picking up spots that we needed coming down the stretch. Ryan outkicked their No. 4 and Garrett held him off. Max caught two guys. If we don't do that, we're not in a tiebreaker situation."

Handley might have won the race outright if junior Pierce Francis was healthy. The junior is normally Handley's No. 4 runner and had a stellar race in taking 11th at the Judges Classic three weeks ago, but he wasn't at full strength on Saturday due to a recent illness.

"He was sick as a dog," Mark Stickley said. "He shouldn't have run. I gave him the option of not running at all today. I admire him for being out there and trying to fight through it. He put his heart in and gave it his best."

"Everyone really had a great race," Beatty said. "I'm super proud of everyone. We're really close. When everyone's so close, it just makes the feeling special."

The James Wood girls are even deeper than the boys. They had nine people place in the top 24 on Saturday.

"The depth of our girls' team is just unbelievable this year," Lofton said. "It's good and bad, because we have a lot of girls who could be varsity on most other teams but are missing out on the postseason.

"The girls have just stepped up all season. They're a tight unit. They work hard. They don't complain. Both teams are like that. I just can't be more proud of them."

For more coverage on Saturday's meet, see Tuesday's edition of The Winchester Star.