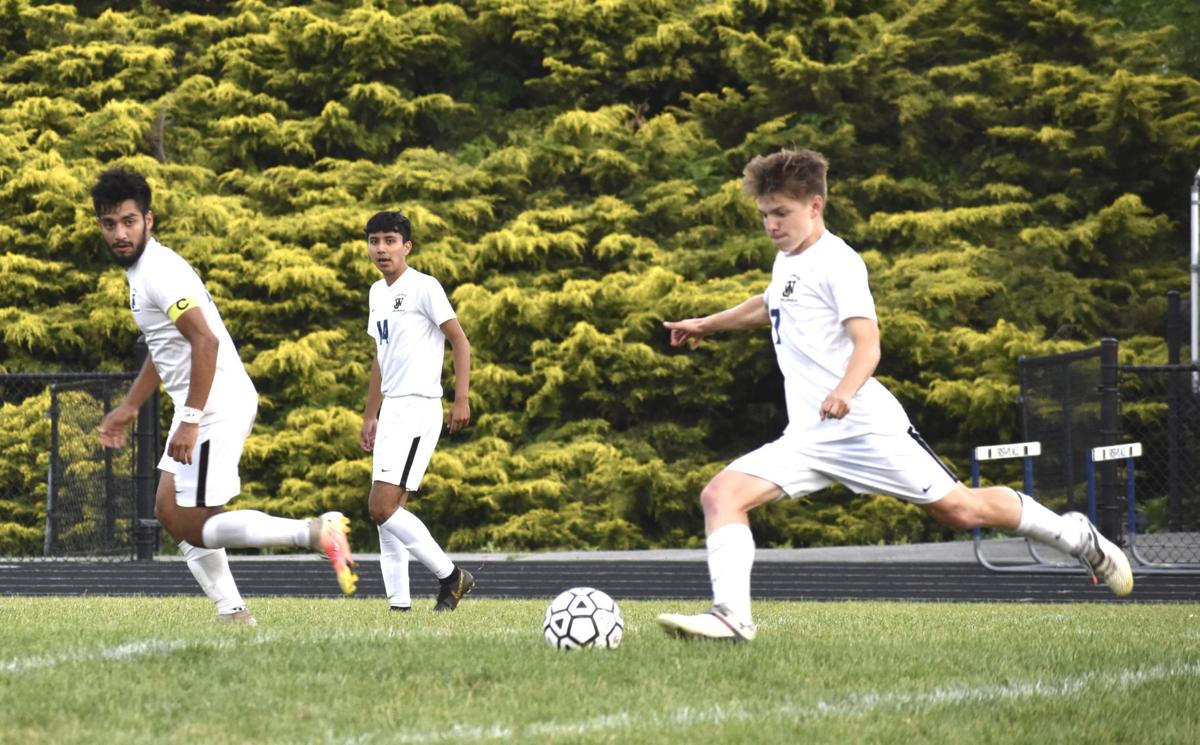 James Wood’s Seth Hammond (right) swings his leg back on a direct kick from just outside the penalty box as Erick Nolasco (left) and Jonathan Resendiz Trejo look on. Hammond had three goals and an assist in the Colonels’ 8-2 win at Millbrook on Tuesday. 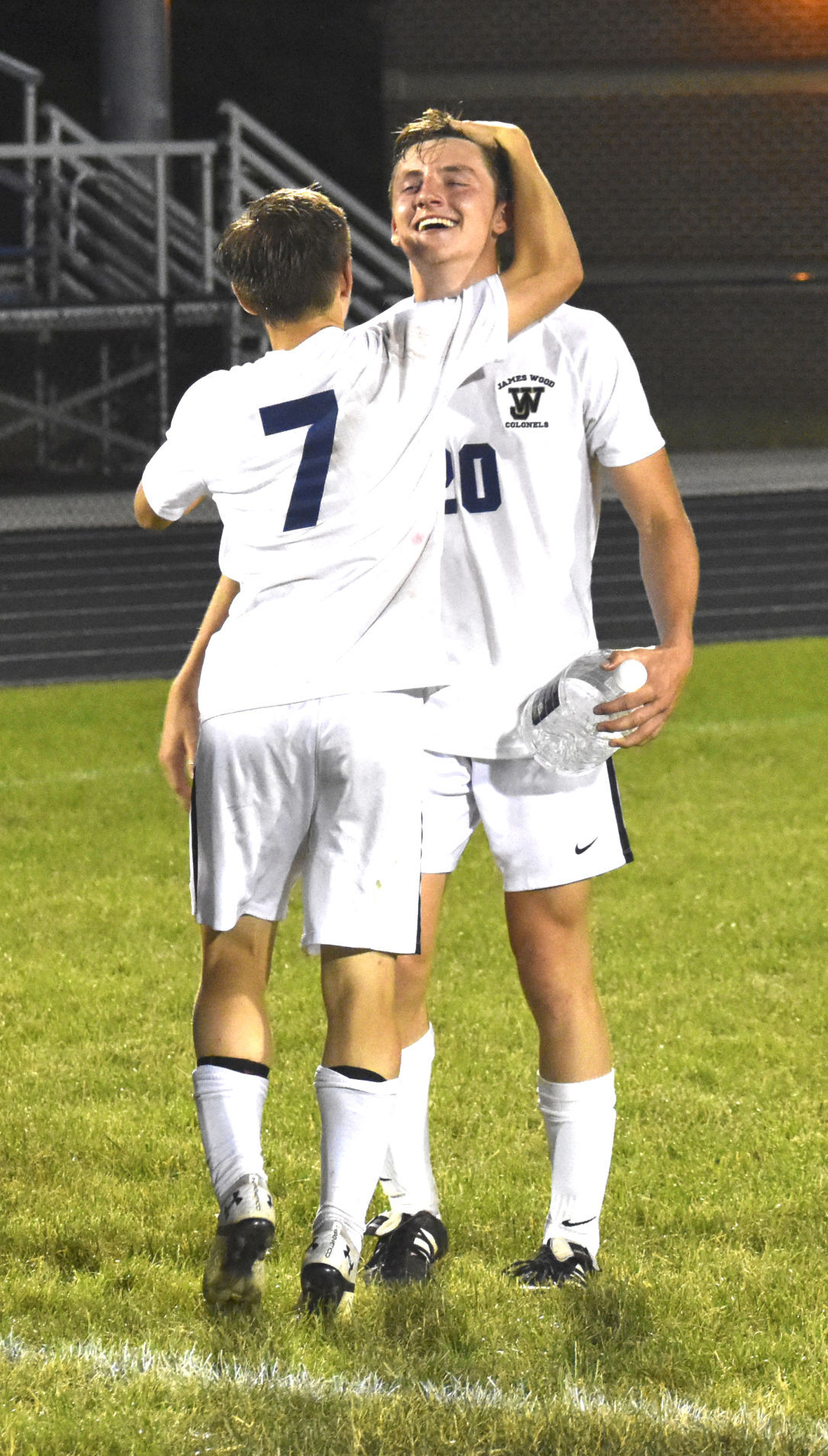 James Wood’s Seth Hammond (left) congratulates Micah Frigaard after Tuesday’s 8-2 boys’ soccer win at Millbrook. Hammond had three goals and one assist and Frigaard had a goal and one assist. 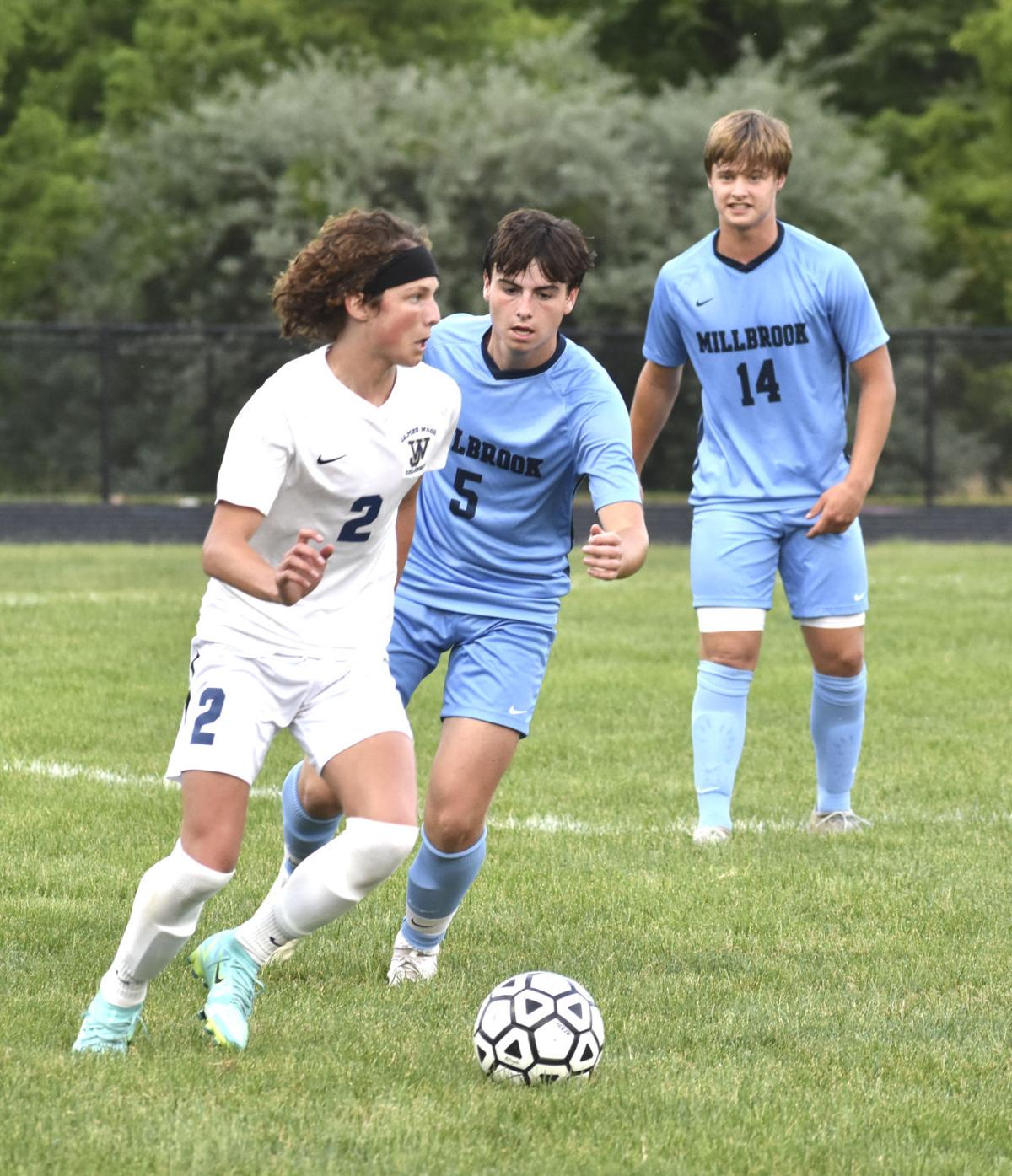 James Wood’s Tristan Obert looks to distribute the ball as he’s defended by Millbrook’s Tyler McGuire (5) as Patrick Sigler looks on. Obert had a goal and an assist in the Colonels’ 8-2 win.

James Wood’s Seth Hammond (right) swings his leg back on a direct kick from just outside the penalty box as Erick Nolasco (left) and Jonathan Resendiz Trejo look on. Hammond had three goals and an assist in the Colonels’ 8-2 win at Millbrook on Tuesday.

James Wood’s Seth Hammond (left) congratulates Micah Frigaard after Tuesday’s 8-2 boys’ soccer win at Millbrook. Hammond had three goals and one assist and Frigaard had a goal and one assist.

James Wood’s Tristan Obert looks to distribute the ball as he’s defended by Millbrook’s Tyler McGuire (5) as Patrick Sigler looks on. Obert had a goal and an assist in the Colonels’ 8-2 win.

WINCHESTER — The James Wood boys’ soccer team walked off the field at halftime on Thursday at Millbrook after giving up their first goals of the year and trailing by one on the scoreboard, its first deficit of the season.

On paper, that sounds like a bad thing. It wasn’t. The pressure had been lifted off the Colonels, and man, did they do one heck of a job of applying pressure to the Pioneers.

James Wood tied the game 75 seconds into the second half and scored five goals in the first 15 minutes after the break en route to an 8-2 Class 4 Northwestern District victory that completed a perfect 10-0 district championship season.

When it was all said and done, the Colonels outscored Millbrook 7-0 in the second half while outshooting them 12-4 in a highly efficient performance.

“After we conceded that [first] goal, it was kind of a burden off our shoulder,” said senior forward Seth Hammond, who had a hat trick and an assist. “That was a lot of pressure not conceding. We just came out stronger in the second half.”

Junior center back Micah Frigaard (one goal, one assist Thursday) agreed. Though the Pioneers (7-3) would add another goal eight minutes after the first in the 21st minute, James Wood’s collective play began to pick up in the latter part of the first half.

“It was good, honestly,” Frigaard said. “We’re glad to get that burden off our shoulders. [Junior center back] Ryan [King] got the communication back up in the back, and we just really started playing better together after that happened. Everybody just started playing much better.”

Frigaard had a major offensive role in getting the comeback started by throwing the ball in from the right corner to Chris Garcia (two goals). The senior forward jumped up and headed the ball in from the top of the goal box to tie the game at 2 to quickly extinguish the lead that a pumped-up Millbrook team had worked so hard to build.

“That was a good morale booster,” said Frigaard.

“I know that whenever he’s making that run, he’s looking to cut [the ball] back,” Hammond said of Ballentine. “He’s a great player and unselfish. I was just in the right spot at the right time.”

Over the rest of the game, James Wood’s effort and execution seemed to result in everyone being in the right spot at the right time.

In the 52nd minute, Hammond blocked a clearance attempt 35 yards from Millbrook’s goal and controlled the ball immediately. He dribbled the ball past a few players, including the goalie, before depositing the ball into the net to make it 4-2.

Frigaard scored from close range near the far left post following a 35-yard free kick cross from Erick Nolasco (two assists) to make it 5-2 in the 54th minute, and Tristan Obert (one goal, one assist) scored on a rebound of a Hammond shot less than a minute later to make it 6-2.

James Wood coach Brian Sullivan gave credit to Millbrook for what it did to break through against the Colonels, and he couldn’t have been more impressed with how his team responded to Thursday’s unique circumstances.

“We’ve talked about adversity and overcoming adversity all year, but we haven’t trailed in a game,” Sullivan said. “I told them at halftime, after they got that second goal, we really raised our level, and you can see the momentum shift, and we were creating opportunities. I said if we keep that up for another 40 minutes, I fully expect to get a couple of goals. We scored in the first two minutes, and then we continued after that.

“I told the guys this whole COVID thing has been adversity. Not playing last year when arguably we would have had this record as well. These guys have earned [a 10-0 record]. They didn’t quit. They didn’t give up. I’m just really, really proud of the work they put in the whole game. That’s a feel-good game going into the playoffs.”

James Wood will the top seed in the West Pod for Tuesday’s Class 4 Northwestern District quarterfinals and take on Handley (0-7-3) at 5 p.m. at home.

Though the players might have felt some relief with the shutout streak over, James Wood obviously came into Thursday with the intention of keeping it going. Shutting out nine consecutive opponents is a feat this team will always remember.

“It’s a lot of the midfield, too,” Frigaard said. “They’re getting a lot of pressure off of us, and when [the attack] eventually comes to us, we have the time and space [to do our jobs]. Brandon communicates a lot in the back, and he’s able to tell us where to go and what we have open. It’s just a lot of communication all around the team to help us out with that.”

Sullivan said midfielders Nolasco and Jonathan Resendiz Trejo definitely help with the defensive effort, but the cohesion of the Colonels’ back line is truly special.

“They’re just really good friends,” Sullivan said. “They go lift weights together on their off days and stuff like that. They will continue to work hard. It’s tough to score against them. Brandon will be the first to tell you — there’s some games where he will come up and make one or two saves because that defense is really, really lockdown.”

The Pioneers have been the second best team in the district this year. Besides losing twice to James Wood, their only other loss has been to Sherando (6-4), which Millbrook will host at 6 p.m. on Tuesday in the district quarterfinals.

The Pioneers are a dangerous team, and if they play like they did in the first half against James Wood for an entire game, the rest of the district should be wary.

“We played a really good first half and we need to tie two halves together,” Millbrook coach Keith Kilmer said. “We don’t put complete games together. We’ve been finding ways to win, but obviously that did not happen tonight.”

Sean Mennard scored the first goal for Millbrook off a Brandon Riley assist to tie the game at 1, and Tyler Mallen scored the second. Both goals came on shots that were 17 yards or more from goal.

Also, in Tuesday’s game against Handley, it was Riley who had the goal and Mennard who had the assist in the Pioneers’ 1-0 win.