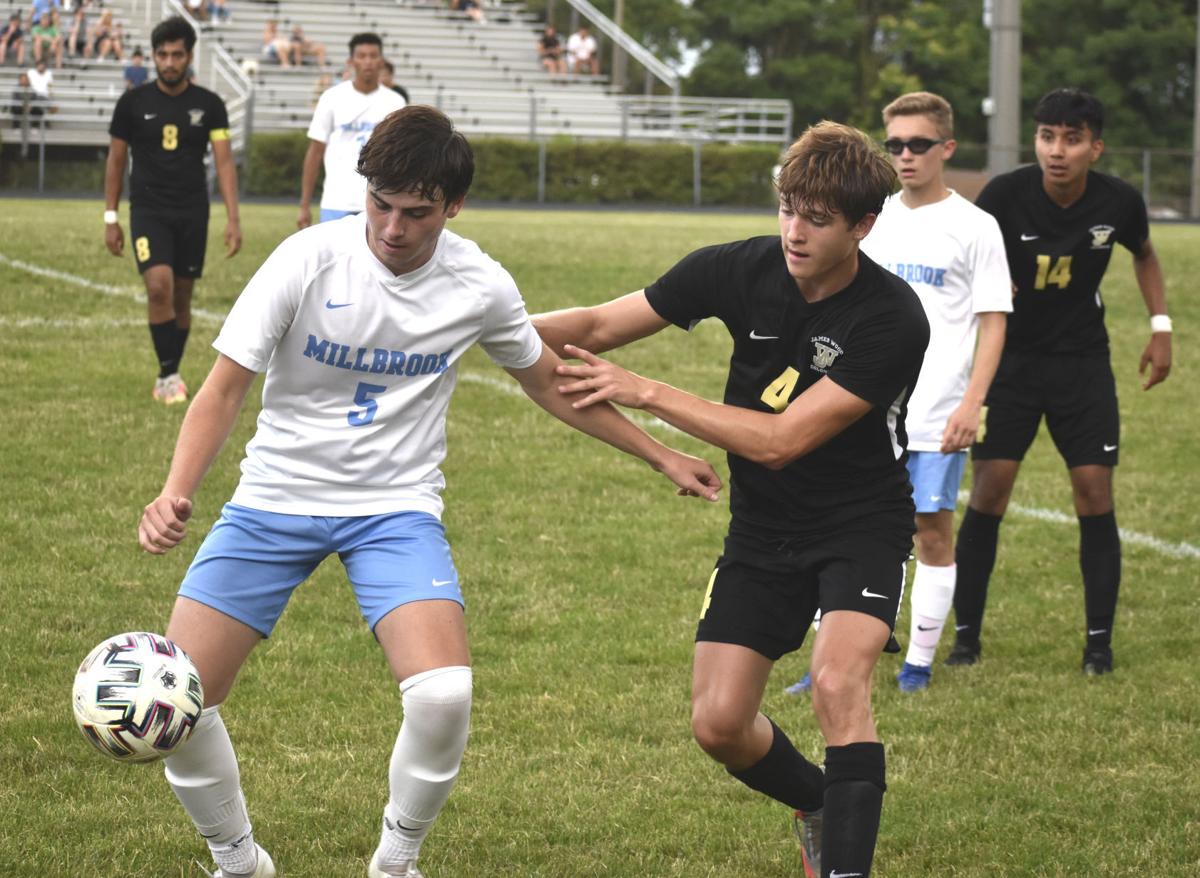 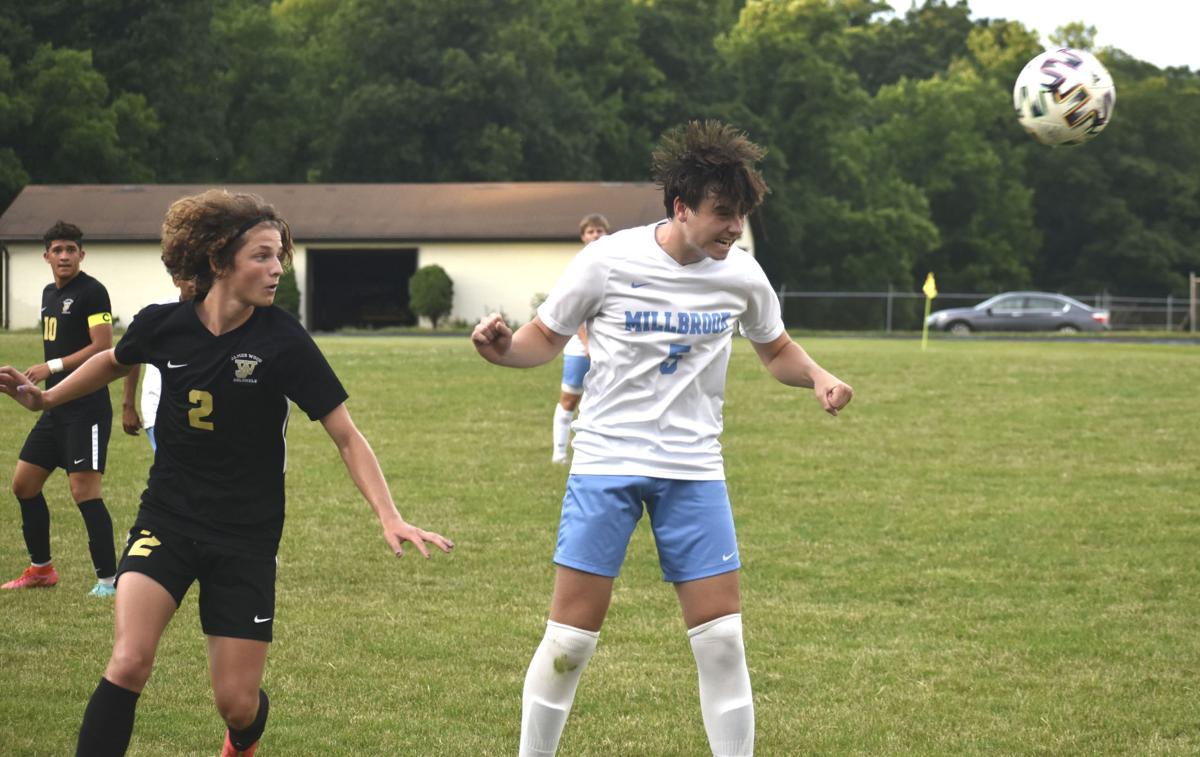 WINCHESTER — It took a little longer for James Wood’s second-half magic against Millbrook to kick in, but it led to the same result.

After the Colonels registered just one shot in the first half, Seth Hammond broke a scoreless tie with a goal four minutes into the second half, and the Colonels went on to a 2-0 win in the Class 4 Northwestern District boys’ soccer championship game on Tuesday night at Kelican Stadium.

The game was shortened to 54 minutes because of lightning in the area, with the initial delay coming right after Tristan Obert fired in a shot on a loose ball from just inside the 18 to make it 2-0. After being outshot 7-1 in the first half, James Wood (13-0) owned a 6-0 shot edge over 14 minutes in the second half. The game was called about 20 minutes after it was initially halted.

The Colonels might not have set out on Tuesday to rely on a familiar storyline to win their first district tournament title since 2011, but it’s sure paid off for them.

Garcia’s goal came off a throw-in from the right corner from center back Micah Frigaard, and on Tuesday it was center back Ryan King throwing the ball in from the left corner on Hammond’s goal. Hammond said King’s throw bounced off another player before making his way to him. Hammond put the ball in with his knee.

“[We talked about] intensity,” Hammond said. “We came out a little static. But in the second half, first 10 [minutes], we knew we had to come out hard.”

James Wood didn’t let up until lightning forced them off the field.

The Colonels — who returned to pose for photos on the field after both teams went inside the stadium field house during the delay — will host the Dulles District No. 2 seed in Monday’s Region 4C semifinal, their first regional tournament game since 2011. Millbrook will travel to the Dulles District No. 1 team. The Pioneers (9-4) are making their first regional appearance since earning four in a row from 2011-2014.

James Wood coach Brian Sullivan simply reminded his team to play the way it’s capable of in the second half.

“Our game is keeping possession of the ball, moving it, getting it off our foot, being patient, not getting caught up in the track meet sometimes I call it, up and down the field,” Sullivan said. “I think keeping possession helps us build confidence, and it gets the [opposing] defense to sag back a little bit. It creates those runs where we can get forward, and we create opportunities for deep throw-ins and set pieces and stuff like that.

“We did a good job coming out in the second half, and that’s been the theme all season. A lot of the games, we focus on the first 10 minutes after the half and coming out intense.”

The Colonels would have preferred to see the game played to its completion, but they handled what they could control.

The Pioneers played an outstanding first half and almost had a goal on a header that James Wood’s defense managed to clear just in front of the goal line. Tuesday’s defeat didn’t diminish the Pioneers’ accomplishments to this point following hard-fought postseason wins over Sherando (which went to penalty kicks) and a 1-0 win over Kettle Run.

“I’m thrilled with what they’ve done and where they’ve come from,” said Millbrook coach Keith Kilmer, whose squad lost nine seniors from the 2020 team, many of whom were impact players. “I wasn’t sure what to expect from this group this year. They’re an amazing group and they’re resilient.

“What’s been the best part of this whole season is they’re a great group of guys to be around. I love this team.”

No one wanted to see the game end early, but the main thing for both teams is that they still get to play during a part of the postseason that no player on either team has experienced.

“It’s just an honor to be on a team that’s made it this far and set this many records,” said King of a Colonels squad that owns the school record for victories and shutouts (11). “No other team has done what we’ve done in James Wood history, and it just feels great to be a part of this team.”

Sullivan hopes that James Wood can replicate the atmosphere generated by Tuesday’s large crowd in Monday’s Region 4C semifinals, since the school will host a girls’ and boys’ soccer doubleheader again.

“Kudos to our fans for hyping our kids up and getting us ready to go in the game,” Sullivan said.