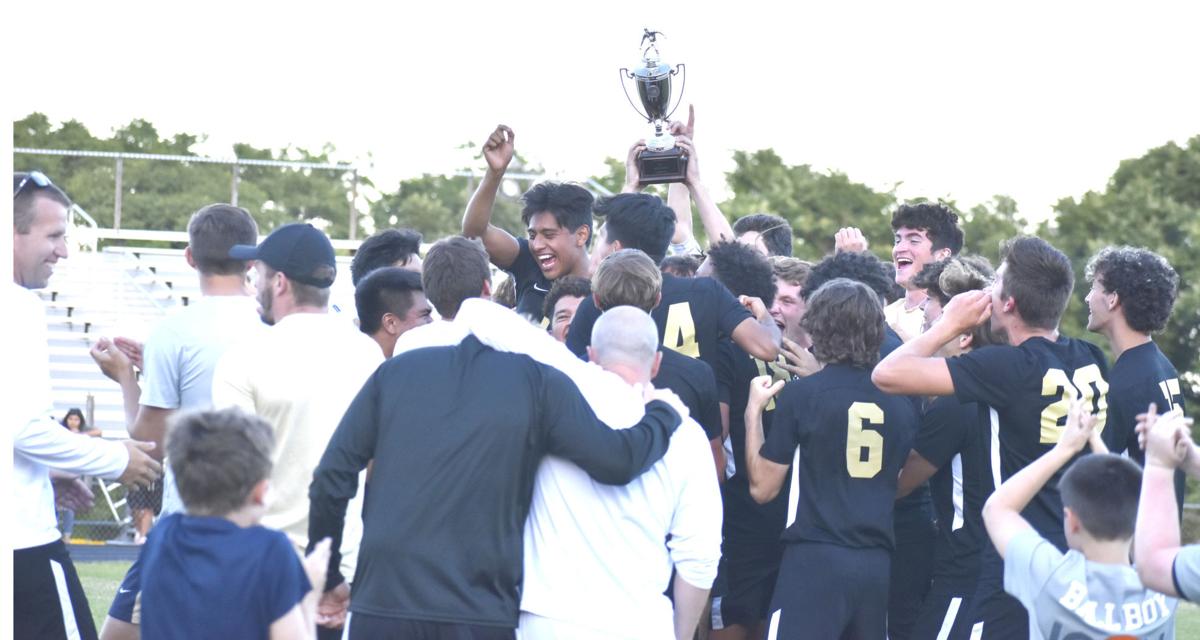 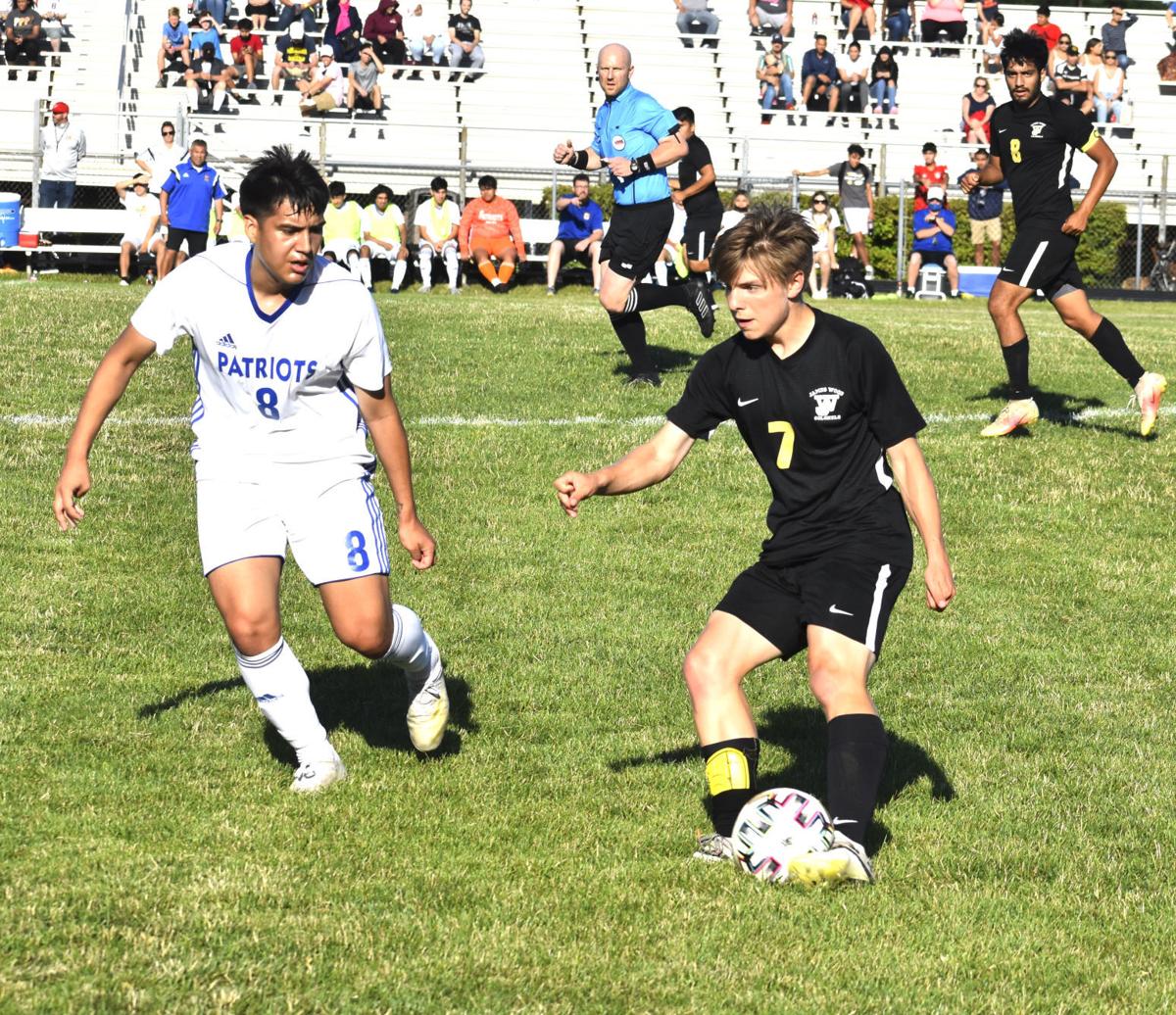 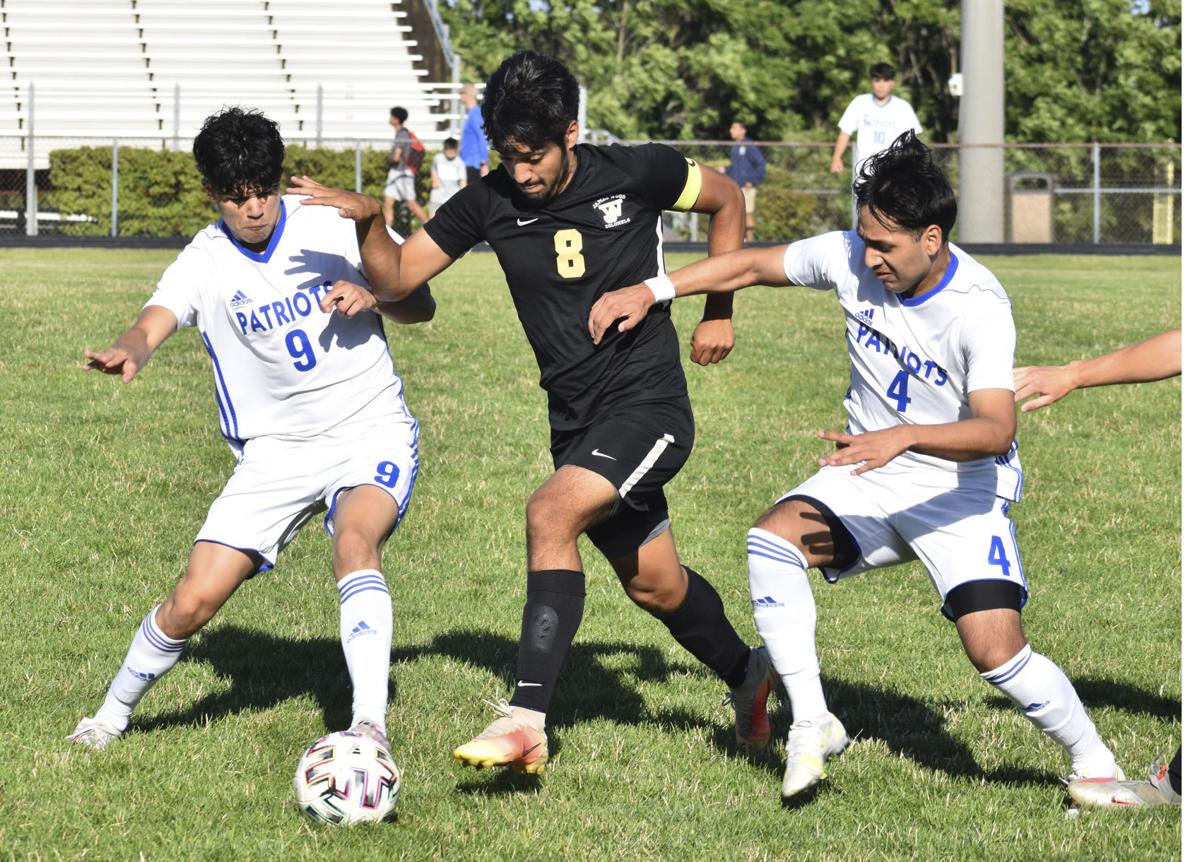 James Wood senior midfielder Erick Nolasco tries to squeeze through Park View's Edwin Henriquez Pena (9) and Dominic Orellana just before he is fouled and sent to the ground in Wednesday's Region 4C title game at James Wood. The Colonels won 2-1. 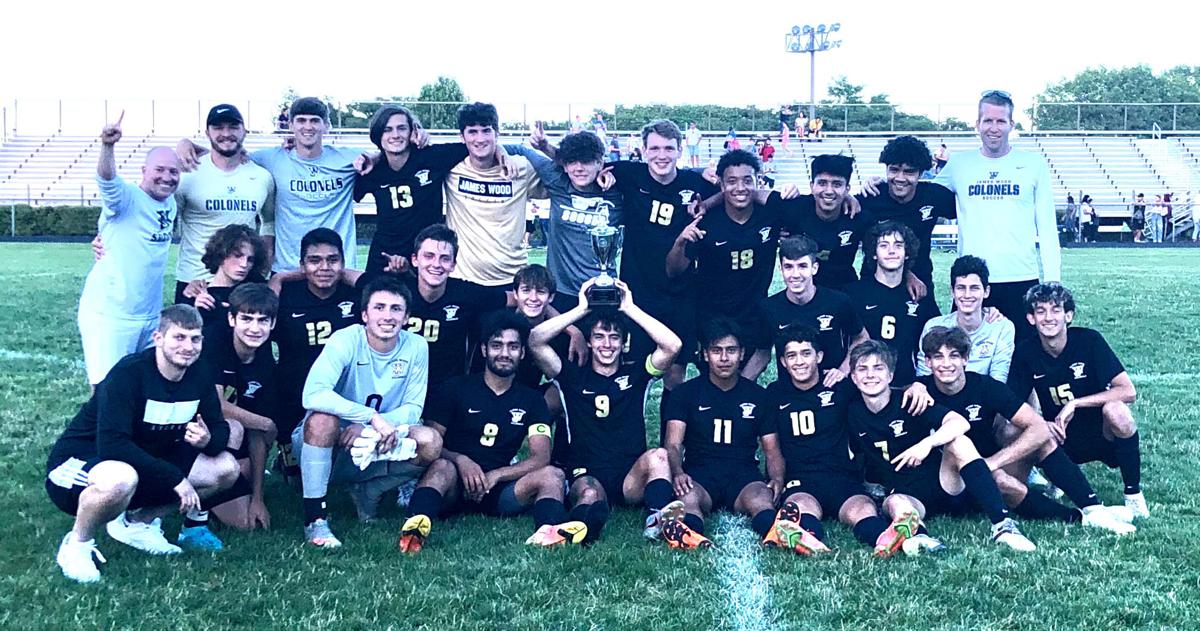 James Wood senior midfielder Erick Nolasco tries to squeeze through Park View's Edwin Henriquez Pena (9) and Dominic Orellana just before he is fouled and sent to the ground in Wednesday's Region 4C title game at James Wood. The Colonels won 2-1.

WINCHESTER — Add another historic milestone to the James Wood boys’ soccer team’s season for the ages.

The Colonels defeated Park View 2-1 on Wednesday in the Region 4C championship game for the first regional soccer title in Frederick County history.

Two days after winning its first regional tournament game in school history, James Wood got to jump and yell while holding the championship trophy in the air, and got to smile and pose for photo after photo on their home Kelican Stadium field.

“Since I didn’t get a junior year, this just means a lot for me and for the whole team,” said James Wood senior captain and midfielder Erick Nolasco as he sported an ice bag on his shoulder following the physical battle with the Dulles District champion and defending Region 4C champion Patriots (10-2-2). “We’re all really happy and excited that we made it this far.”

James Wood’s mantra throughout the season has been “not done yet.” The Colonels’ push to win the first team state title of any kind since 2002 is scheduled to continue on Monday in the Class 4 state semifinals. James Wood will travel to take on the champion of Region 4D, which will be decided on Friday when Blacksburg takes on Jefferson Forest.

On Wednesday, goals with a minute to go in the first half by freshman midfielder Tristan Obert and in the 62nd minute by senior forward Hammond proved too much to overcome for Park View, which didn’t find the net until there was one minute remaining on a direct kick from a little more than 20 yards away.

Park View — which played a man down for the last 30 minutes when one of its players was issued a red card for smacking Nolasco in the back of the head — was unable to get off another shot in the final minute.

The two teams were even in shots (seven), saves (three) and possessed the ball similarly, but James Wood executed at a level that was a little more efficient than Park View to get the job done.

The Colonels have done an excellent job all season of punishing teams on throw-ins into the penalty box, and Obert was the latest to do damage. Ryan King’s throw-in from the right side found Obert on the doorstep of the goal, and after the ball popped up off Obert’s thigh he headed the ball in to send the large James Wood fan base into a frenzy.

“I was trying to hit it for a volley,” Obert said. “But right when I took the touch I looked up and saw the keeper [Dived Ezat] heading out, so I knew I had to put it up [and head the ball in].”

it was a huge shot of momentum for the Colonels in a game in which it looked like goals would be hard to come by. The Patriots had three shots to James Wood’s two in the first half.

In the second half, Park View continued to struggle in its attempts to crack James Wood’s defense, and the Patriots also struggled with their composure. One player got a yellow card early, then another received the red card 10 minutes into the second half for smacking Nolasco. That meant Park View was going to have to play with one fewer player over the remainder of the game.

Being a man up hardly put James Wood at ease. Colonels coach Brian Sullivan had to get the attention of multiple Colonels over the remainder of the game to make sure they didn’t go over the edge themselves due to the physical nature of the game.

James Wood senior goalkeeper Brandon Dunn (three saves) made a big save by scooping up Edwin Henriquez Pena’s long-range shot that bounced shortly in front of him in the 58th minute.

Four minutes later, Hammond scored what turned out to be the game-winning goal.

James Wood senior right back Aidan Barton played a long ball down the right side over the top of the defense from near midfield, resulting in a foot race between Hammond and the Park View keeper Ezat. The two got to the ball at almost the same time, but Hammond’s touch resulted in a deflection that went behind Ezat. Hammond knocked the ball into a wide-open net from the right edge of the penalty box for his 24th goal of the season.

“Aidan played a beautiful ball and just let me run onto it,” Hammond said. “The keeper came out, and luckily I got there first.”

Hammond was near the James Wood sideline when he scored, and the Colonel players swarmed him.

“Pure hustle from Seth,” said Sullivan of the goal.

The Colonels’ superlative defense then finished things off, not allowing another shot until Ali Mahgoub scored on his direct kick with one minute left. Sullivan said the Colonels wanted to limit forwards Pena and Luis Nunez on Tuesday, and defenders Barton, King, Micah Frigaard and Ethan Bowman didn’t allow them to do much productive work.

James Wood has found a way to dig deep whenever it needed to this year, and on Wednesday they did it in the biggest situation of all. The Colonels also had to dig deeper with their bench as a result of an injury to starting outside midfielder Connor Ballentine halfway through the first half.

“It’s a real team,” Hammond said. “We all like each other, we all really bond as a group, and that helps us in games. I think what brought us the win in the end was that we were able to stick together.”