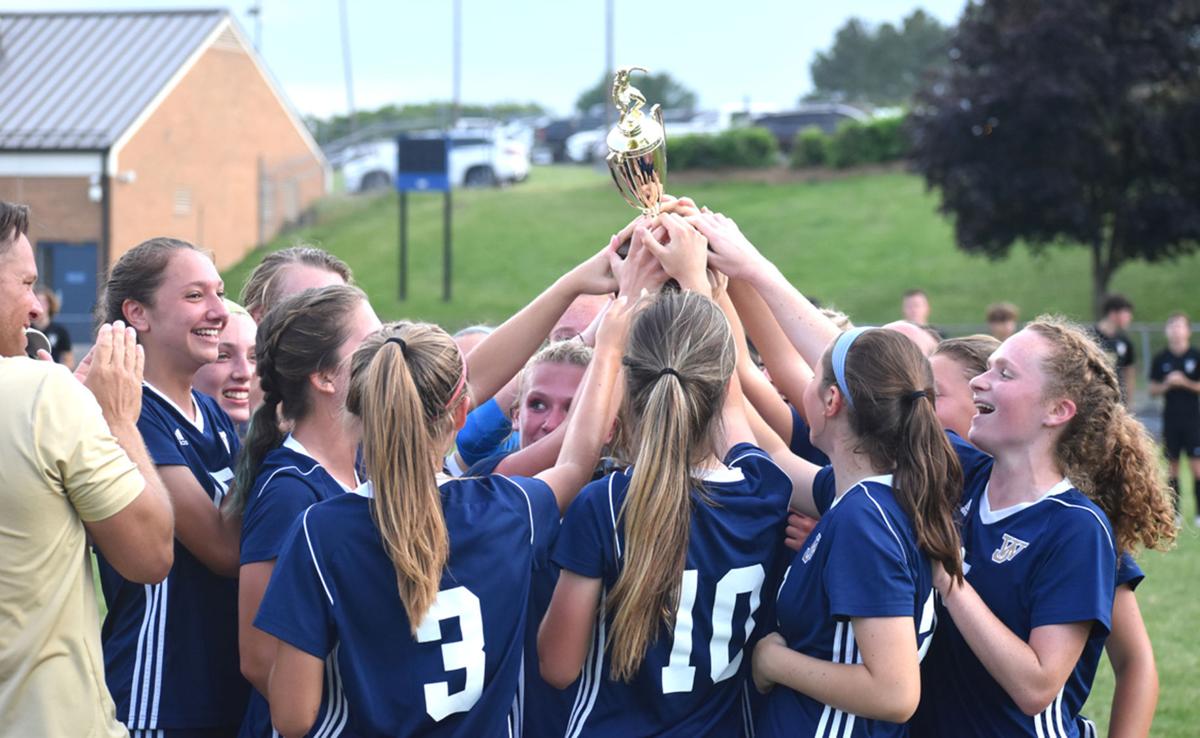 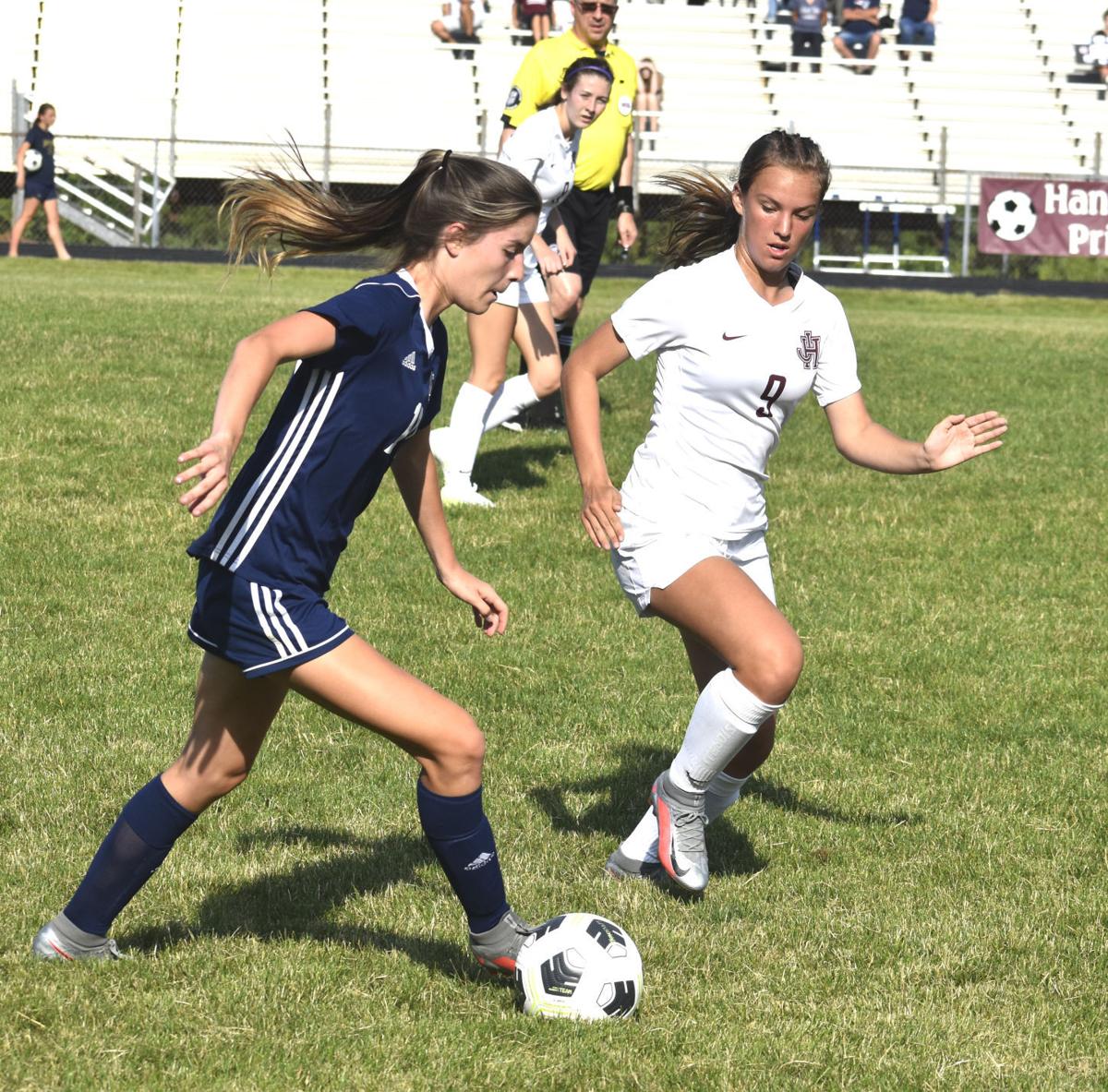 WINCHESTER — The members of the 2019 James Wood girls’ soccer team will always remember that season for winning a school-record 14 games.

The 2021 Colonels still feature 12 players from that team, 10 of whom are seniors. On Tuesday, those players got to avenge one of the few things they didn’t like about that 2019 campaign.

The Judges beat James Wood in the 2019 Class 4 Northwestern District title game at Handley. The Colonels (11-0-2) swept both of their regular-season meetings with the Judges (8-4-1) this year, but Tuesday’s game was the one they truly wanted.

“Honestly for us, coming into this game, with our 10 seniors, it was revenge for sophomore year,” said James Wood senior goalkeeper Sadie Kerns following a series of team pictures. “That loss, that hurt. We wanted this so bad. And I think we proved that we want this.”

James Wood will host a Region 4C semifinal game against the No. 2 seed from the Dulles District on Monday. Handley — which played without star forward/midfielder Mikayla Balio because of an injury suffered over the weekend — will travel to the Dulles No. 1 team that day.

James Wood’s desire for a tournament title wasn’t demonstrated through a hot start, but rather through how quickly it responded to Handley throwing the proverbial first punch.

The Judges scored 11 minutes in when a cross from Alivia Ricci from the right side bounced off a James Wood defender and rolled to Handley midfielder Peyton Duvall, who kicked the ball in from about 10 yards out to make it 1-0. That goal came two minutes after Kerns (three saves) made a sliding stop on Taylor Roark and with the Colonels still not having attempted a shot.

James Wood’s first shot turned out to be a beauty. Just three minutes after Duvall’s goal, Colonels freshman midfielder McKenna Newcome took a pass from senior defender Anna Woodson and began to work her way toward the right side of the penalty box area. As she reached the 18 she fired a shot that started out high before dipping and curling inside the far left post to make it 1-1.

“We kept our composure,” Kerns said. “I think we did well responding after their goal and getting a goal right back.”

“I think we found our game,” Newcome said. “Connecting passes, moving the ball forward, and then we just capitalized on that.”

James Wood went on to outshoot Handley 9-2 over the last 26 minutes of the first half, and an excellent passing combination led to what turned out to be the game-winning goal.

Stationed near midfield on the right side, Colonels junior forward Olivia Walker played a diagonal ball inside to Newcome. With two Handley defenders almost right on top of her, Newcome split them with a perfect ball into space down the right side. The speedy Walker ran onto it and dribbled all the way to near the right edge of the goal box. She passed inside to freshman Kelsey Gass, who was open in the middle near the the top of the goal box and deposited the ball into the net with her first touch to make it 2-1.

“Olivia made a really good overlapping run off of the pass to me,” Newcome said. “We’ve just connected like that all season.”

Gass was only brought up from the JV for the postseason, and she’s taking full advantage of her opportunities off the bench. Against Fauquier in Thursday’s semifinals, she scored within a couple minutes of entering the game.

The Colonels didn’t rest on their lead at halftime, as they forced Handley goalkeeper Emma Westfall to make 10 saves on 10 shots. (James Wood also had a goal in each half called back for offsides penalties. Handley, which managed just three shots after the half, was whistled for a hand ball in the box following a corner kick to nullify a goal with 20 minutes left.)

James Wood coach Donavan Russell wasn’t surprised at all by how well the Colonels responded to Handley’s start.

“I knew we were going to come back,” Russell said. “I’m glad it was so quick. To answer that quick, to level the playing field again ... both teams kind of discovered that neither one of us was going to leave here easily.

“I was really happy with our possession in the offensive third. We’ve been working on that for a couple of weeks now. We held the ball and passed it around. We were making passes earlier in the season to nobody, and today we held on to the ball and made the next best pass.”

“We just know they have speed up top, and they like to come outside, inside, all the different ways,” she said. “We just tried our best to kind of mitigate that, and I think we did a good job. I’m super proud of them. They never gave up and never dropped their heads. They stayed positive throughout it all.”

Echard gave Westfall a lot of credit for her play.

“She was a beast,” Echard said. “She came up with some big saves. She does not play like she’s a sophomore.”

Russell said he was glad to see his team follow up on its spectacular regular season by beating a rival once again.

“The girls just played hard. They were not going to lose to Handley in our stadium. They were determined.”