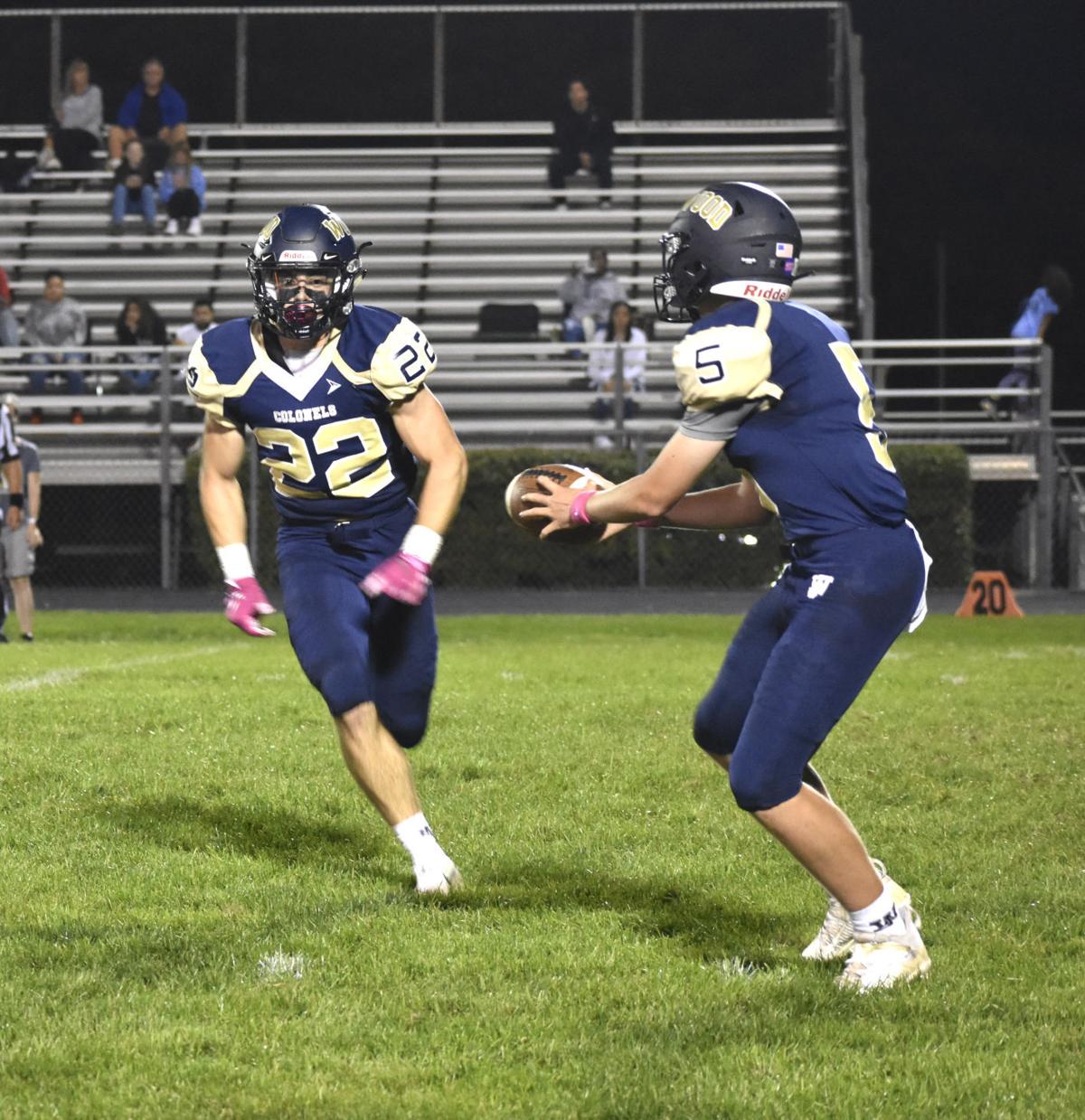 Jaden Ashby moves toward Jared Neal before taking a handoff that produced a 76-yard touchdown run on Friday night at Kelican Stadium. Ashby had 262 total yards and three touchdowns in James Wood’s 42-24 win over Liberty. 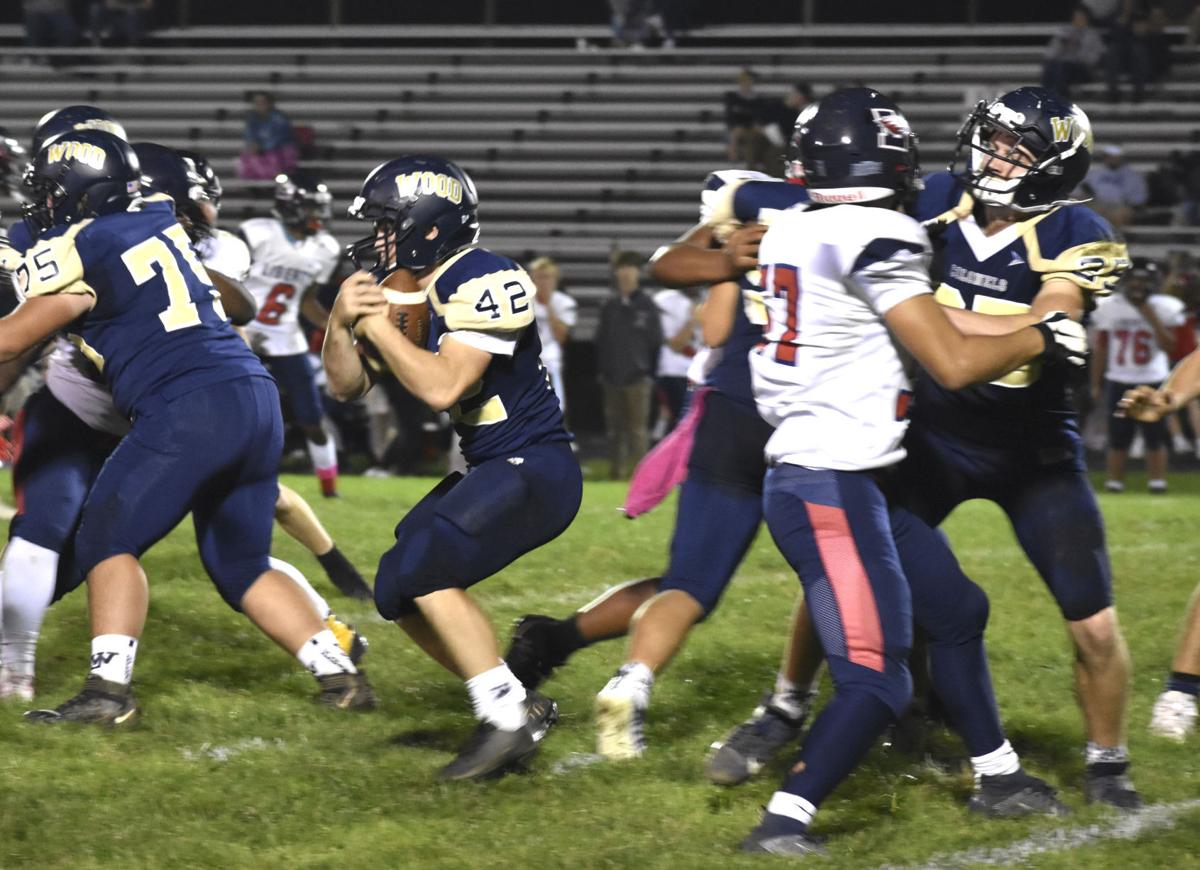 Jaden Ashby moves toward Jared Neal before taking a handoff that produced a 76-yard touchdown run on Friday night at Kelican Stadium. Ashby had 262 total yards and three touchdowns in James Wood’s 42-24 win over Liberty.

WINCHESTER — It was an unusual win, but the James Wood football team will definitely take it.

James Wood exploded for 42 points in the first half despite running only 19 plays to Liberty's 45 and possessing the ball for six minutes and 32 seconds.

The Colonels couldn't find the end zone in the second half — at least not officially due to penalties — and didn't score at all in the last 24 minutes. But their 30-point halftime cushion was more than enough to give them a 42-24 Class 4 Northwestern District win over Liberty on Friday night at Kelican Stadium.

Senior wide receiver Jaden Ashby scored three of the touchdowns, including a school-record 97-yard touchdown reception on a throw from Jared Neal to make it 15-0 with 6:10 left in the first quarter. Ashby had four catches for 143 yards and seven carries for 119 yards, including a 73-yard TD run that made it 22-6 with 7:37 left in the second quarter.

"It's a huge win for our program to get a win versus Liberty, who has dominated the series for almost 20 years," said James Wood coach Ryan Morgan, whose Colonels were coming off a 33-14 loss to Jefferson (W.Va.) last week in which they were shut out in the first half. "Last week, we played a really good team in Jefferson, but our kids knew they could have performed better last week.

"They showed what they could do tonight. We just have to keep it going for four quarters."

In the second half, Ashby had two long TDs called back and Wes Brondos had an approximately 50-yard run brought back by blocking penalties  (James Wood had 15 penalties for 127 yards overall while Liberty had eight for 70 yards.) Liberty outscored Wood 12-0 after halftime and wound up outgaining the Colonels 432-359 for the game due largely to a 328-yard, three-TD passing performance from freshman quarterback Austin Mawyer (16-of-31 passing), who also added 43 yards and a TD on 20 carries.

But those first two quarters from James Wood were something to behold.

"Last week, we weren't doing too well on offense," Ashby said. "But the beginning of the game today, we stepped it up and came out hot, and did what we had to do."

Before James Wood's offense took flight, it was the Colonels' special teams and defense that made its mark.

The Colonels forced a three-and-out on Liberty's first possession, and Ryan King returned a 33-yard punt 20 yards to the Liberty 22.

Brondos fumbled two plays later at the Eagles 14, but James Wood forced another three-and-out. This time, no punt return was necessary — Cody Owens dropped the punt snap. Owens picked it up and attempted to kick the ball, but Cody Dueweke blocked it and Andrew Link recovered the ball in the end zone. Neal's conversion pass to Link made it 8-0 at the 8:57 mark of the first quarter.

Liberty drove 26 yards in eight plays on its next possession before having to punt from the James Wood 45. This time Owens pinned the Colonels at the 4 with a 41-yard punt.

After James Wood lost a yard on first down, Ashby left his feet to catch a pass at the Wood 25 from Neal on the right side. He then turned on his defender and showed off his blazing speed for a 97-yard TD. Hunter Barnhart's extra point (he made four of five attempts) made it 15-0.

With some help of penalties, Liberty marched 72 yards over 11 plays to make it 15-6 with 8:38 left in the second quarter, with Mawyer running the ball in from four yards in to make it 15-6. (Defensive end Caleb Keefer, who played a big role in the Colonels recording nine tackles for loss and ripped down Mawyer for a two-yard loss on a fourth-and-2 keeper at the Wood 35 after faking a handoff on the previous possession, blocked the extra point.)

Liberty couldn't enjoy that success for long. Three plays later, Ashby ran around the left side on a jet sweep and made a couple of cuts along the way for a 73-yard TD run that made it 22-6.

Finally, Brondos had a 38-yard TD run with 1:47 left in the first half to make it 42-12. That score came four plays after Ashby had an interception after Liberty tried a double pass, with Mawyer throwing a lateral to the left side to start it off.

"The kids came out fired up and had good energy before the game in the locker room," Morgan said. "I thought they were excited to come out and play, and that showed in the first half. It seemed like we came out firing on most cylinders."

James Wood won comfortably despite the penalty woes it dealt with in both halves. The flags included personal fouls, pass interference and blocking calls.

"You can't control what flags are thrown and which ones aren't thrown," Morgan said. "I need to do a better job of setting an example and just rolling with the punches, because as the head coach, the team takes it cues from me.

"There were still plays to be made that we didn't make. We kind of got distracted at times or down at times, because we had some big plays called back. We just have to control what we can control."

Outside of a few missed tackles, James Wood limited Liberty's running game and read the Eagles' options plays well. And 76 of Mawyer's passing yards came on a wheel route pass to Owens (four catches, 126 yards) to close the scoring.

"For the most part, we were doing a pretty good job of staying over the top, though there were some underneath zones they were able to find [passing the ball]," Morgan said. "I thought we had a pretty good pass rush overall. We just have to do a little bit better job of staying in our pass lanes, because there were times the quarterback was able to step up through the middle."

Jared Laws added five catches for 86 yards and a TD for Liberty.