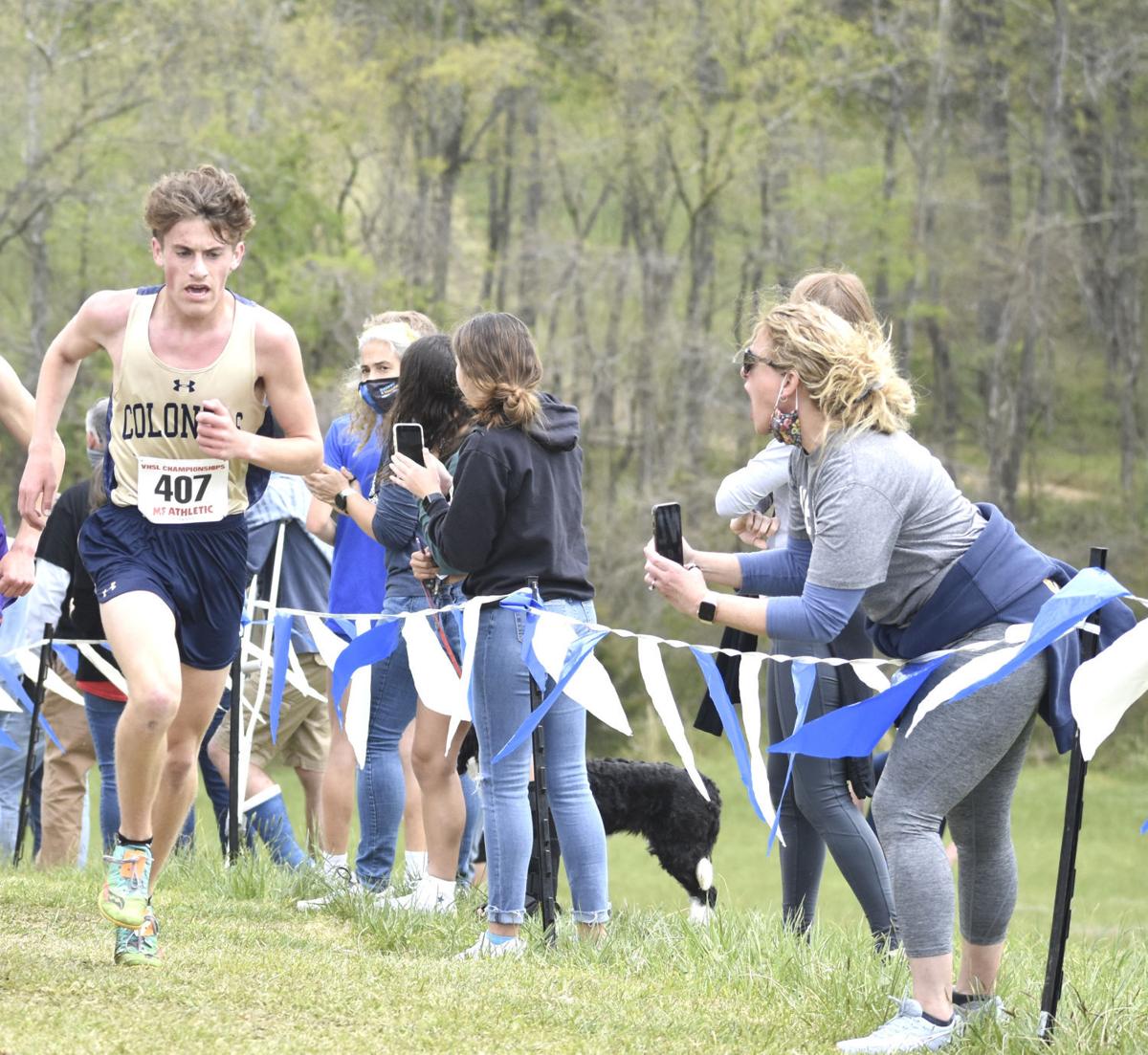 James Wood junior Nathaniel Woshner is cheered on by his mother Stephanie during the last mile of the Class 4 state cross country meet on Saturday at the Oatlands course in Leesburg. Woshner placed 13th to earn All-State honors. 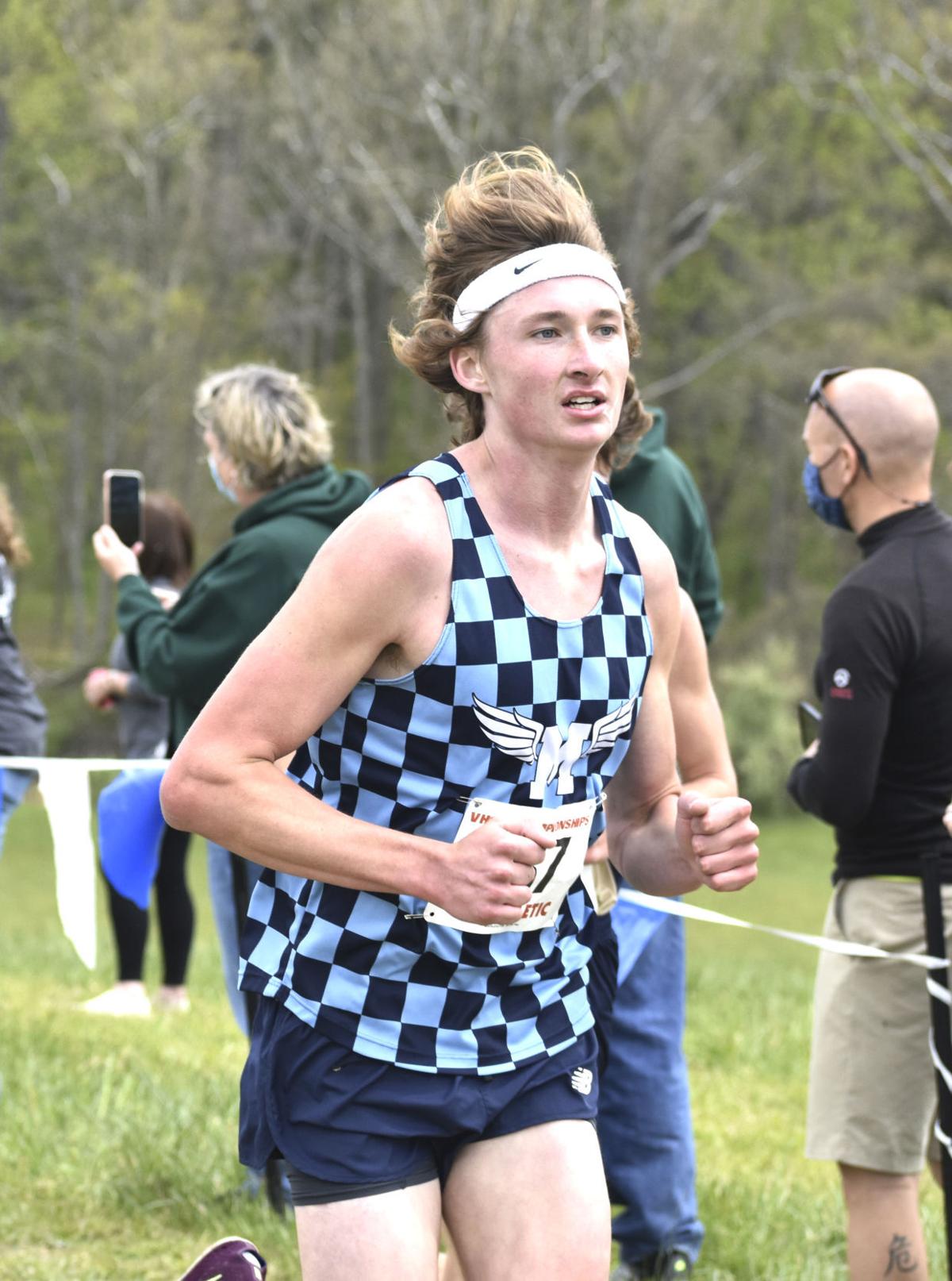 James Wood junior Nathaniel Woshner is cheered on by his mother Stephanie during the last mile of the Class 4 state cross country meet on Saturday at the Oatlands course in Leesburg. Woshner placed 13th to earn All-State honors.

“[My goal] was to stay with the top group like always, and then maybe kick it in at the end and get a higher placing,” Woshner said. “That didn’t really work out the way I wanted it to.”

Woshner might not have placed as high as he wanted to on Saturday, but placing higher than any Colonel since 2014 in state competition isn’t a bad way to end the season.

Woshner placed 13th out of 68 runners to earn All-State honors (top 15) on Saturday and crossed the finish line of the 3.1-mile course in a time of 16 minutes and 55 seconds. Woshner is James Wood’s first All-State runner since Andrew Shade, who placed 10th in 2014.

Woshner wasn’t alone on the Colonels in hoping for a better performance. James Wood placed seventh out of eight teams with 162 points. The meet was won by Jefferson Forest, which ended Loudoun Valley’s five-year reign as state champions in a tight battle. Jefferson Forest scored 61 points to edge Grafton (62) and Loudoun Valley (65).

“I was talking to [the runners Friday], and according to what I looked up on Milestat with the other teams, if we had a great race, we could probably be as good as third place,” James Wood coach Matthew Lofton said. “I told the guys we had nothing to lose and to be aggressive, because we were basically seeded sixth. So let’s go out there and try and get that third.”

That didn’t happen. Lofton said the unusual nature of this year’s cross country season might have played a role in Saturday’s performance.

A lot of the Colonels put in hard training during the Frederick County Parks & Recreation season in the fall to keep in shape. And James Wood’s runners didn’t take off much time during the winter so they could be at their best for the delayed Virginia High School League season, which started on March 1 instead of its typical August start due to COVID-19 concerns.

“I feel like these guys just didn’t have that time off that they needed, even though they’ve had a week off here and there. They’ve worked so hard, and it’s unfortunate they didn’t have the best race at the state meet. I knew it was going to be hard to get here, and we were fighting like each race was going to be the last one. I think we just had too many races and too many miles on our legs. And we just felt it today.”

Senior Chris White definitely didn’t feel his best on Saturday, and that feeling began before the race even started.

“Right on the starting line, I was like, ‘Oh man, I didn’t eat enough,” White said. “My whole felt drained after the hill right before the two-mile mark. I just felt like my body was full of lactic acid.

“Then up the hill [leading up to the 2.5-mile mark], I was just mentally discouraged, because I knew I wasn’t going to get All-State from when they were yelling out all the places. And that’s what I wanted all season. I think that was just a stab in the foot.”

White — who collapsed shortly after crossing the finish line — still took second among James Wood runners and third among the nine local boys on Saturday by placing 31st overall in 17:32.

While it wasn’t the finish White hoped for, it beat not finishing at all, which is what happened with White during last year’s state meet at Great Meadow in The Plains. White suffered a stress fracture in his hip and was out for two months.

White said he definitely enjoyed the year he had with this teammates, which saw the Colonels win their third straight Class 4 Northwestern District meet title and advance to the state meet for the second consecutive season.

“My training’s been good, and I like my coach a lot,” White said. “My teammates are great. This has been a really memorable year.”

James Wood’s other scoring runners were junior Liam McDonald (49th in 18:22), senior James Burdock (55th in 18:42) and sophomore Jacob Oliver (58th in 18:47). Freshman Ethan Pratt-Perez, who was the team’s No. 2 runner last week en route to earning All-Region honors, was not able to score points on Saturday.

Woshner said after crossing the creek about 1.5 miles into the race, he started to struggle as the course started going uphill, and he could no longer stay with the lead pack.

Millbrook sophomore Nick Hayden caught up to Woshner as they made their way uphill en route to the 2.5-mile mark, but Woshner said he was able to break away from Hayden after they hit the 2.75-mile mark. That led to Woshner securing an All-State spot — Hayden finished 16th in 17:06, one place and two seconds away from All-State status.

Lofton said Woshner had the potential to go higher, but Lofton noted there was some impressive competition.

While Loudoun Valley didn’t boast the roster it’s had in past years this spring, Grafton, Patrick Henry and Louisa County each placed multiple runners in the Top 11. Those schools (Louisa had individual runners) and Jefferson Forest showed the rest of the state is pretty strong as well.

Hayden did well to put himself in position for All-State, but couldn’t quite finish it off.

“I didn’t want to go out too hard, because [the course] is pretty hilly,” Hayden said. “I felt pretty good going up the hill [leading to the 2.5-mile mark], but then I just didn’t feel good after. It took a lot out of me.”

Hayden took 63rd at last year’s state meet, so Saturday was another indicator of his progression.

“I’m happy I was able to come to this,” Hayden said. “I took the last [Region 4C individual] spot, so I was pretty close to not coming. Hopefully, I can improve upon this next year.”

“He’s putting his heart and soul into it, but his body’s just kind of giving up a little bit on him right now,” McCarty said. “He’s putting himself in the right spots. He just couldn’t quite close the deal today.

“A year ago, [All-State] wouldn’t have even been a thought for him. Him putting himself in this position is a testament to how hard he’s willing to work.”

Handley junior and Iowa transfer Nico Schianchi was yet another runner that was hoping for a better outcome. He placed 40th in 17:58.

“He was so disappointed,” Handley coach Mark Stickley said. “I get it. I feel for him. It was a rough day. Some of those days just don’t click. I’m not quite sure why. His training had been going great. He was in a good spot mentally, and he got out where he wanted to be.

“Shortly after the mile, mile and a quarter, things just started going south. At that point, it becomes a really long race, and then you’ve just got to push through and try to salvage it, and he did. But he had much higher goals coming in.”