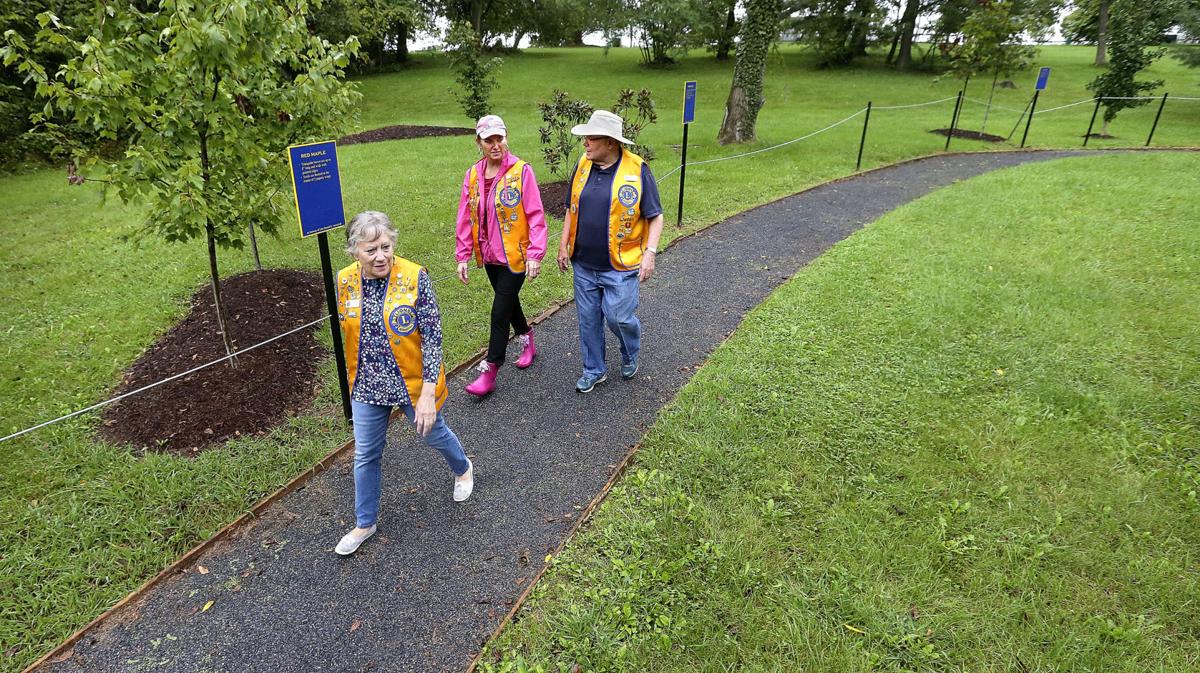 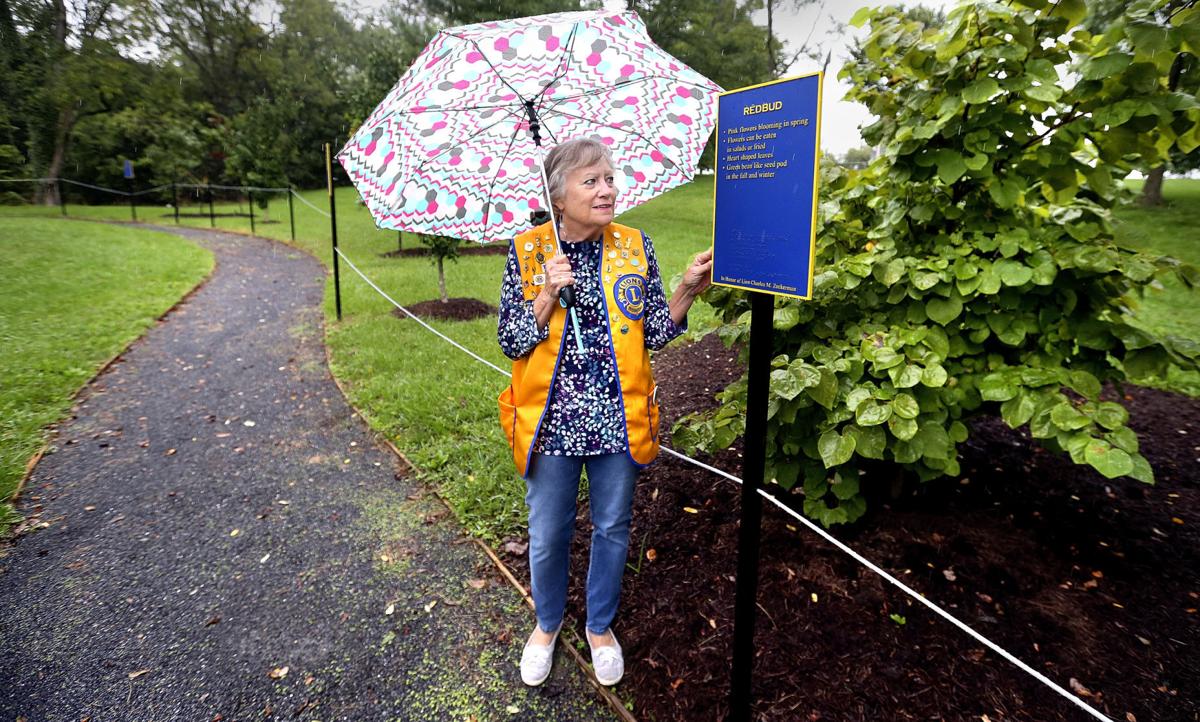 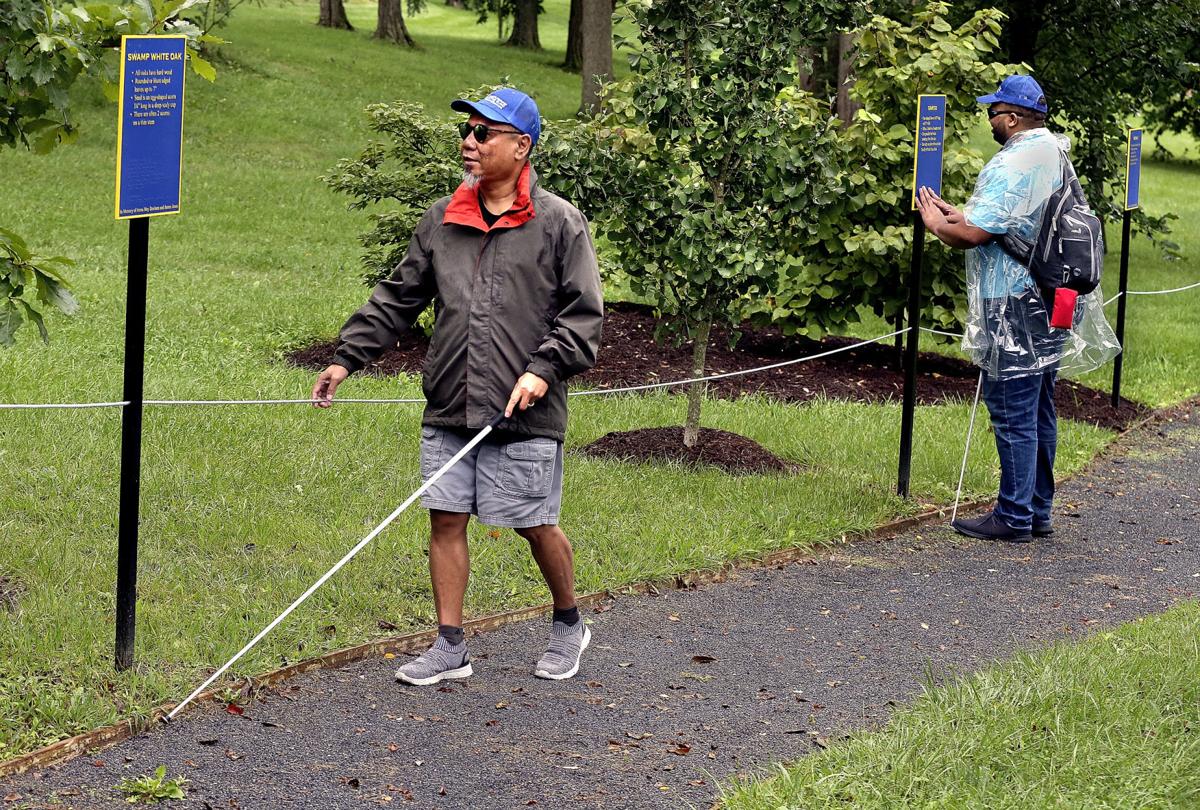 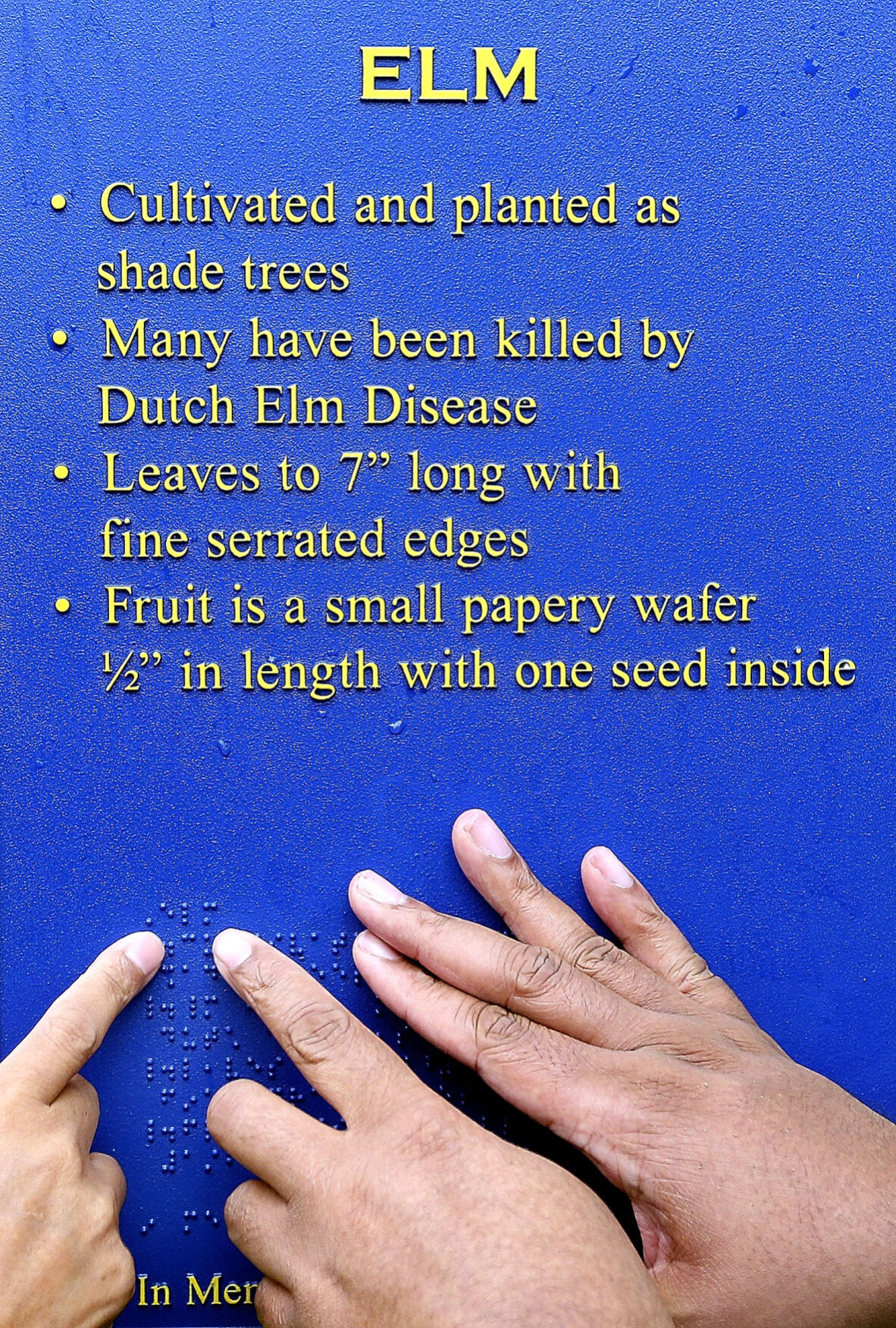 Visually impaired Frederick County residents Wayne Williams and Chris Walker read in braille what is printed above while exploring the new Sensory Trail in Jim Barnett Park on Wednesday. 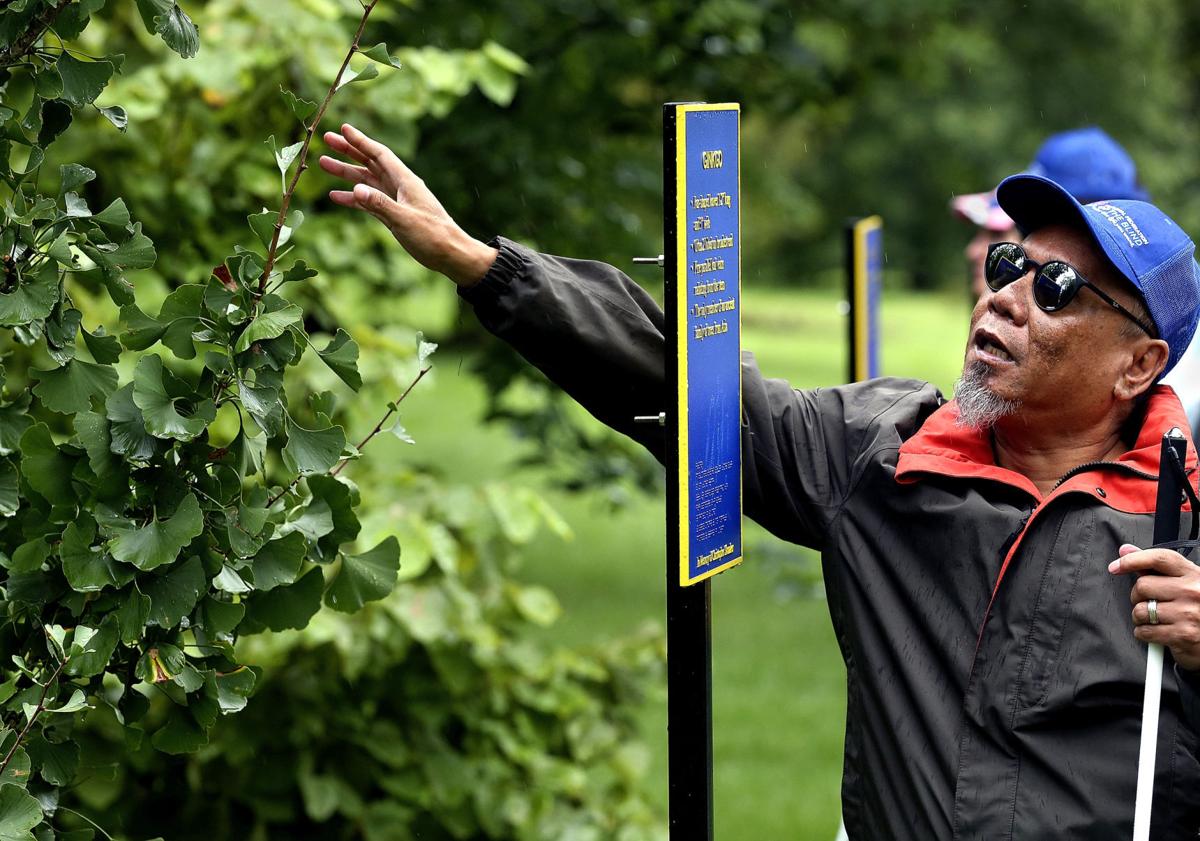 Chris Walker of Frederick County reaches out to touch a ginkgo branch while being one of the first visually-impaired people to explore the new Sensory Trail created by the Winchester Host Lions Club in Jim Barnett Park.

Visually impaired Frederick County residents Wayne Williams and Chris Walker read in braille what is printed above while exploring the new Sensory Trail in Jim Barnett Park on Wednesday.

Chris Walker of Frederick County reaches out to touch a ginkgo branch while being one of the first visually-impaired people to explore the new Sensory Trail created by the Winchester Host Lions Club in Jim Barnett Park.

WINCHESTER — The first thing Chris Walker noticed on Wednesday was that the smooth pavement switched to finely crushed gravel, letting him know he had entered the new Sensory Trail in Jim Barnett Park.

“That’s good,” he said as the rubber tip of his walking stick slid from one surface texture to the next.

Walker’s friend, Wayne Williams, followed a braided steel guideline to the first of several small signs along the trail. His fingers glided across the braille text that told him he was standing in front of a white pine. He reached out and touched the tree’s sticky, sappy branches while inhaling the scent of fresh evergreen.

Williams, whose vision is limited to light and colors, is vice president of the Winchester Chapter of the National Federation of the Blind. Walker, who is totally sightless, is the organization’s president. On Wednesday, they were the first visually-impaired people to experience the new Sensory Trail that was a project nearly six years in the making for the Winchester Host Lions Club.

At 2 p.m. Sunday, the trail will officially be unveiled and opened during a special commemoration hosted by members of the local Lions Club. Parking will be available in the lot of Jones Funeral Home, 228 S. Pleasant Valley Road, which is where the entrance to the trail is located.

Construction of the Sensory Trail started in September 2017 but progressed slowly due to COVID-19, weather conditions, donation and material delays and so on. Winchester Host Lions Club member Celia “Caz” Zuckerman said the idea was to do something locally to celebrate that year’s 100th anniversary of Lions Club International.

The trail is comprised of a gravel walkway laid out in a small oval that includes benches, flowers and 14 trees. A waist-high guideline allows people with limited or no sight to find their way along the trail, and signs with both raised and braille lettering are positioned in front of each tree — all but one, a ginkgo that originated in China, is native to the northeast United States — so they can learn about the species that stands in front of them. The trees are close enough for visitors to touch and smell the leaves, needles and branches.

“Some of the trees are still in the growth stage,” Winchester Host Lions Club member Tom Crosby said.

Williams is a nature lover who, despite Wednesday morning’s rain, enjoyed the smells and textures of the trees. His favorites, he said, were the gingko and plum.

Zuckerman said she favors the trail’s redbud tree, and no wonder. The sign in front of it says the tree was dedicated to her father, former club member and Winchester Mayor Charles Zuckerman, who died on Christmas Day at the age of 96.

Winchester Host Lions Club President Sabra Veach noted her fondness for a herb garden and bench near the center of the trail, both of which were installed by local Eagle Scout Philip Reese.

Just because the Sensory Trail is finally opening on Sunday doesn’t mean the project is finished. Zuckerman said plantings and additional landscaping will continue for years, and there are plans to build an archway at the trail’s entrance.

Walker suggested on Wednesday the addition of an audio app for trail users who can’t read braille or raised lettering. The suggestion was warmly received by Veach, Zuckerman and Crosby, and Williams volunteered to look into the project to determine how they can make the app available for future trail visitors.

“I’d be happy to help you guys out with that,” Williams said.

The Winchester Parks and Recreation Department will continue to partner with the local Lions in the Sensory Trail, maintaining the grounds, supervising plantings and making sure the gravel pathway is free from tripping hazards like the black walnuts that occasionally drop from an overhanging tree.

“It is always a pleasure when we can work with an organization to enhance Jim Barnett Park, especially when we can serve a special population and give them access to nature,” Winchester Parks and Recreation Director Chris Konyar said.

“Being out in nature, being able to explore what we don’t get visually is really important,” Walker said.

Winchester’s Sensory Trail is just the third one in Virginia — the other two are in the George Washington National Forest and Sky Meadows State Park — and is the only one located within a city that has nearby shopping, dining and hotels, Crosby said.

According to information from Cornell University’s Employment and Disability Institute, an estimated 178,400 people with visual impairments currently live in the commonwealth.